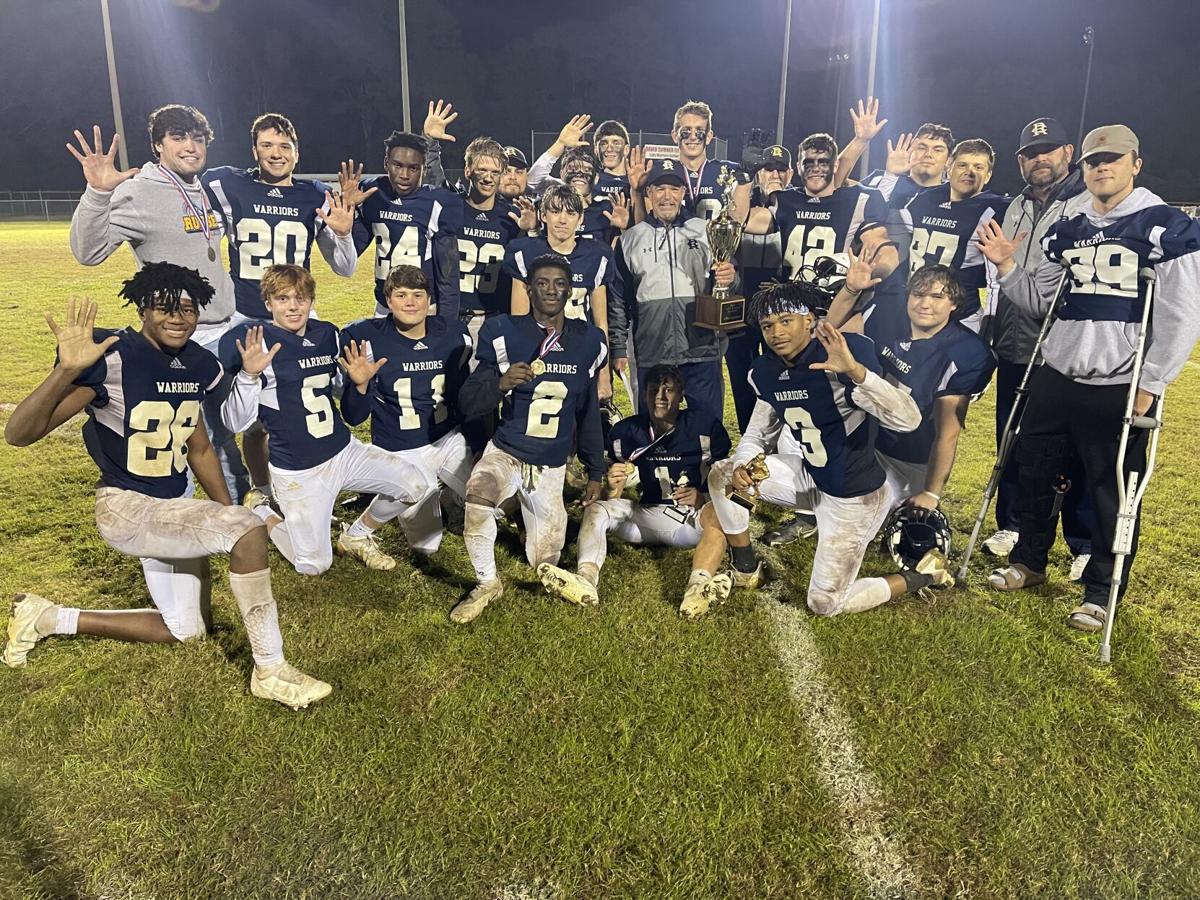 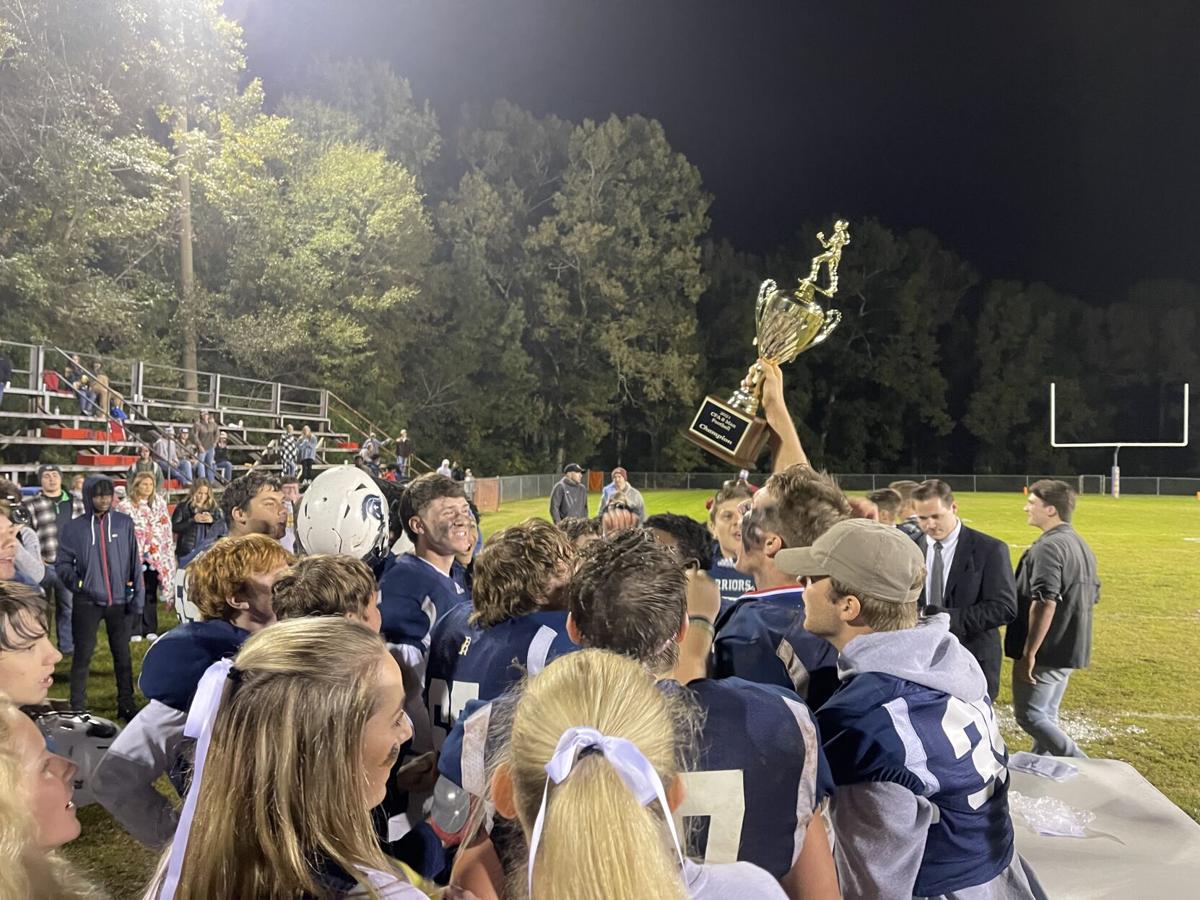 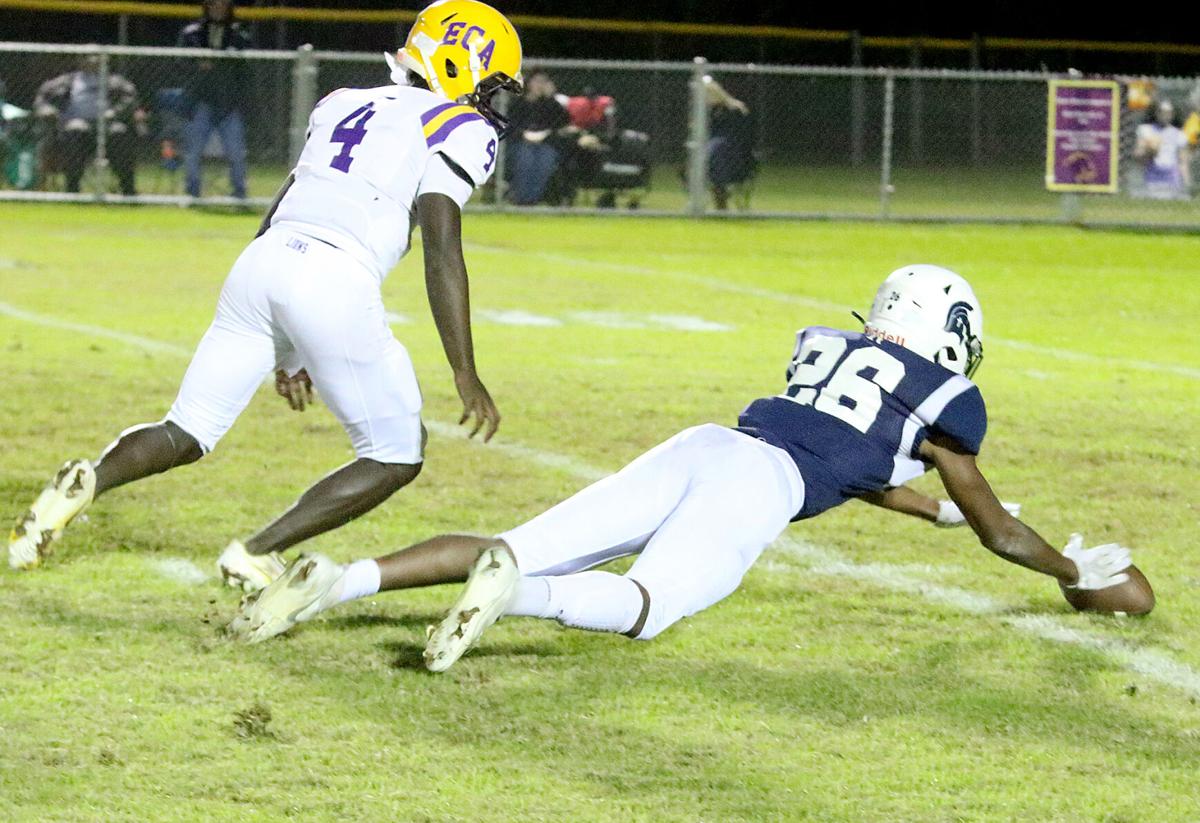 Russell Christian Academy's Gabe Brinson (26) dives for the football after it was fumbled by Evangel Christian during the ACEA eight-man state title game Friday, Nov. 5, 2021, at Tuscaloosa Christian. 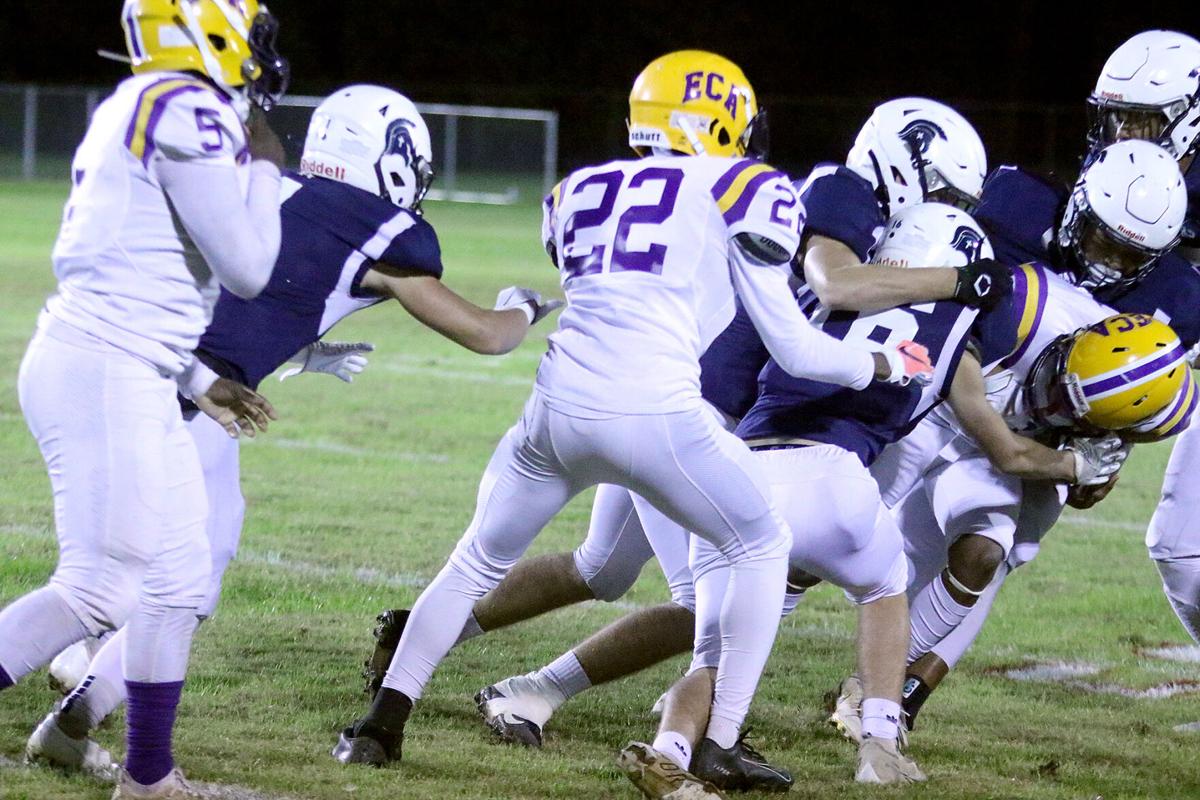 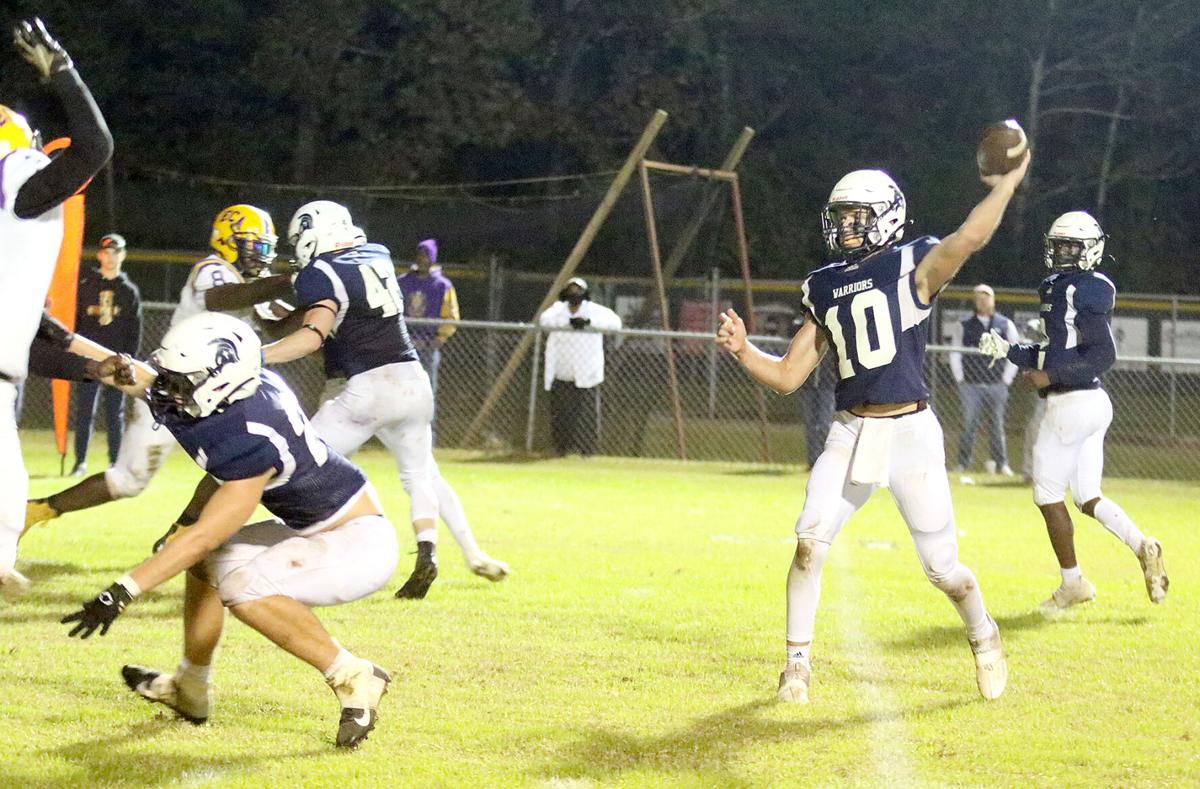 Russell Christian Academy's Gabe Brinson (26) dives for the football after it was fumbled by Evangel Christian during the ACEA eight-man state title game Friday, Nov. 5, 2021, at Tuscaloosa Christian.

COTTONDALE, Ala. — Kam Darden was injured his freshman and sophomore seasons, making him unable to play in the state championship game in 2019 and 2020 for Russell Christian Academy.

The win was RCA’s fifth state title in as many years, and Darden’s big game earned him MVP honors for the contest. After not being able to play in the state championship game his freshman and sophomore years, Darden said coming up with big plays for the Warriors was even more satisfying.

Darden scored RCA’s first touchdown with less than a minute to go in the first quarter on a 66-yard pass from senior quarterback Micah Taylor. Johnny Wilson intercepted a pass at the 41 with 11 minutes left in the second quarter and ran it back for a pick six, and Taylor had a 10-yard touchdown run later in the second to give RCA a 20-0 lead at the half.

Evangel got on the board in the third quarter when Jeremiah Williams caught an 11-yard touchdown pass to cut the Warriors’ lead to 21-8, but Darden responded with an 83-yard reception that made it all the way to the Lions’ 2, setting up a 2-yard scoring run by Taylor with 10:35 remaining in the fourth quarter to give the Warriors a 28-8 cushion.

Evangel wasn’t finished, though, and the Lions scored on a long touchdown pass on their next possession, cutting the RCA lead to 28-16. RCA scored one more touchdown when Wilson scored on a 36-yard carry with 5:04 remaining in the game, putting RCA ahead 34-16. The Lions scored their final touchdown with 22.8 seconds remaining to make it 34-24, but Evangel couldn’t recover the onside kick, sealing the win for RCA.

“This one’s special because we weren’t supposed to do this, this year,” RCA head coach Andy Braddock said. “We graduated so many seniors and starters last year, but I knew this team was special with how hard they worked all summer and fall. I knew coming into this game it would be the toughest game we played this season, and it’s probably the toughest game we’ve played in three or four seasons. I couldn’t be more proud of my guys.”

Taylor, who was named All-League Quarterback and Offensive Player of the Year in the ACEA, said of all the championship games in which he was a part, Friday’s was the most memorable just because of how difficult an opponent Evangel proved to be.

“This was my favorite one, of course, since it was my senior year,” Taylor said. “I like how (Evangel) fought hard and fought until the end. It was really fun, but most of all I want to give God the glory for this win. We can’t do it without Him.”

Darden tallied 173 receiving yards, while Wilson finished with 148 yards and a touchdown. Taylor had 216 yards passing and a touchdown, and John Benny Jones led the Warriors defensively with 21 tackles. Duke Moore finished with 12 tackles, Wilson had 11 tackles and two interceptions and Aiden Burns tallied 13 tackles for RCA.

Once the game was over, Taylor joked with a few of his fellow seniors by calling them has-beens, but he said he wasn’t ready to seriously consider the label just yet.

“Not right now, I don’t,” Taylor said. “I still have basketball.”

The Warriors finished their season 11-0.

Services for Mr. John Reid will be held Wednesday, Jan. 19, 2022, at graveside, at 11 a.m. Interment will be held in Forest Lawn Memory Gardens cemetery. To view the full obituary go to www.webbstephens.com.

Funeral services for Ouida Frazier Hogue, 72, will be Tuesday, Jan. 18, 2022, 2 p.m., at Frazier Grove Church. Visitation is from 1-2 p.m. at the church. Visit www.webbstephens.com to view the register and sign the guestbook.

DEKALB [ndash] Martha Eva White passed away peacefully in her home on Jan. 15, 2022, at 85 years of age. Born on Sept. 9, 1936, in Cordova, Ill., Martha was the daughter of John and Helen Nelson. Moving with her family from Illinois to Mississippi at a young age, she was no stranger to adver…