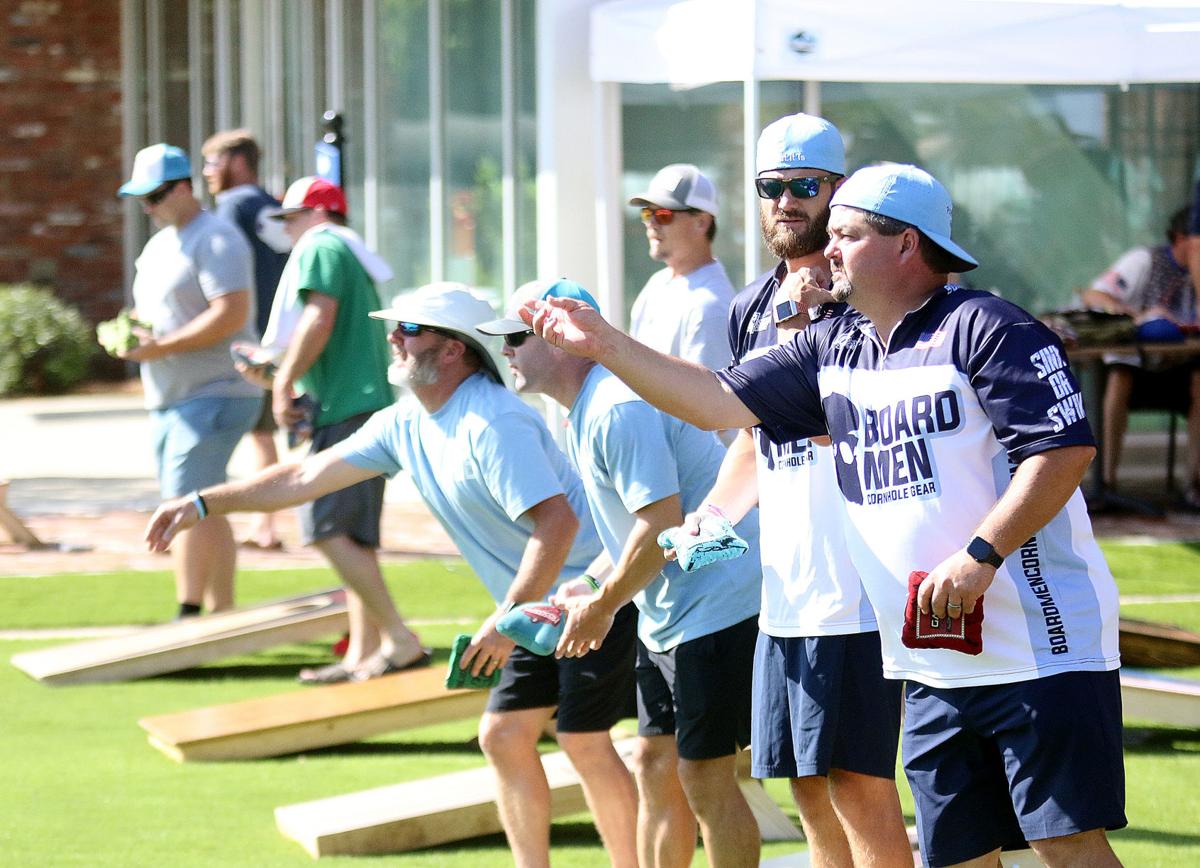 Competitors line up and toss bean bags during the practice portion of the State Games of Mississippi’s cornhole tournament Saturday morning at The MAX. 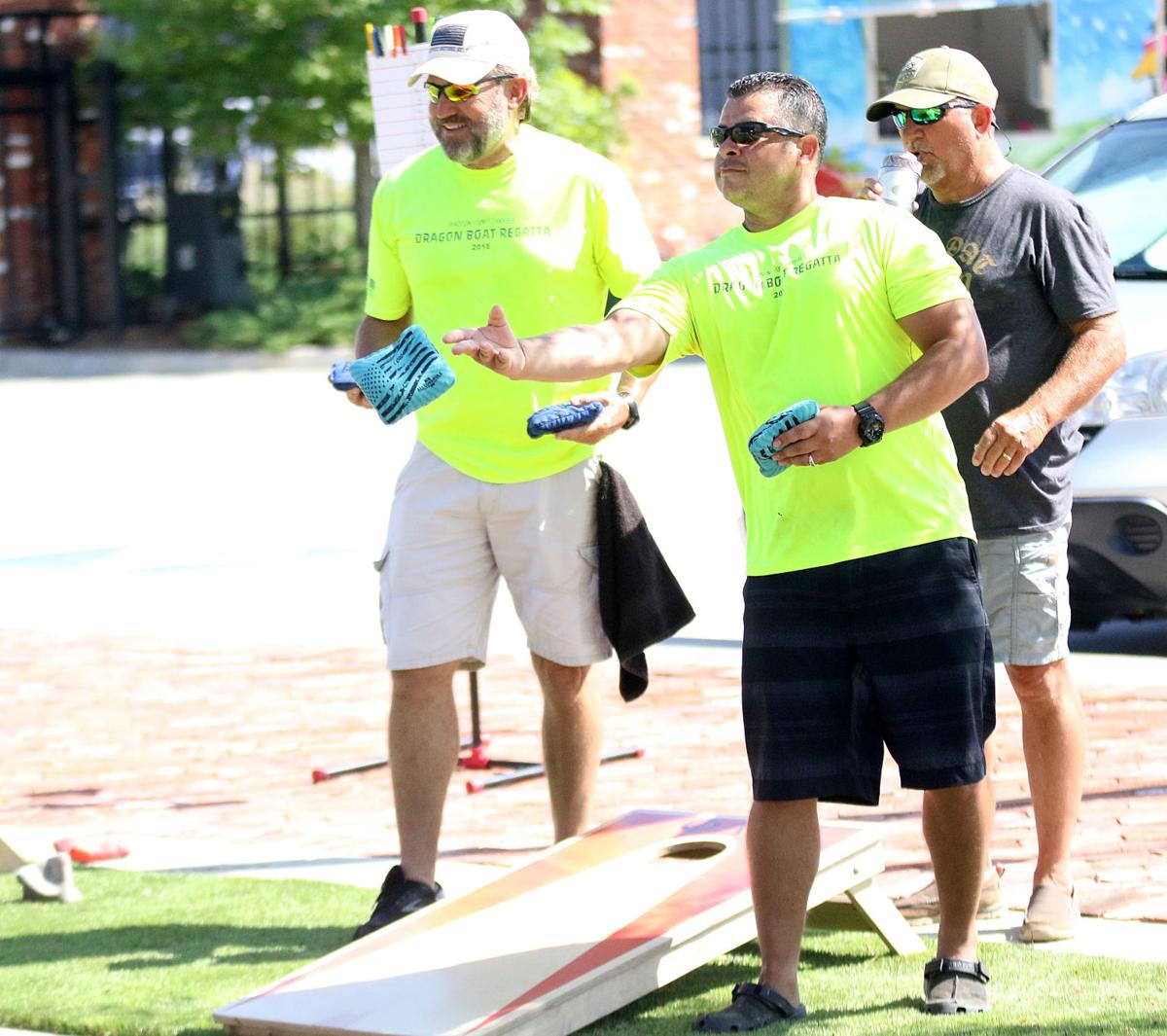 Chad Stout, front right, tosses a bean bag at the opposite board as teammate Chuck Harrison, left, watches during the State Games of Mississippi’s cornhole tournament Saturday morning at The MAX. 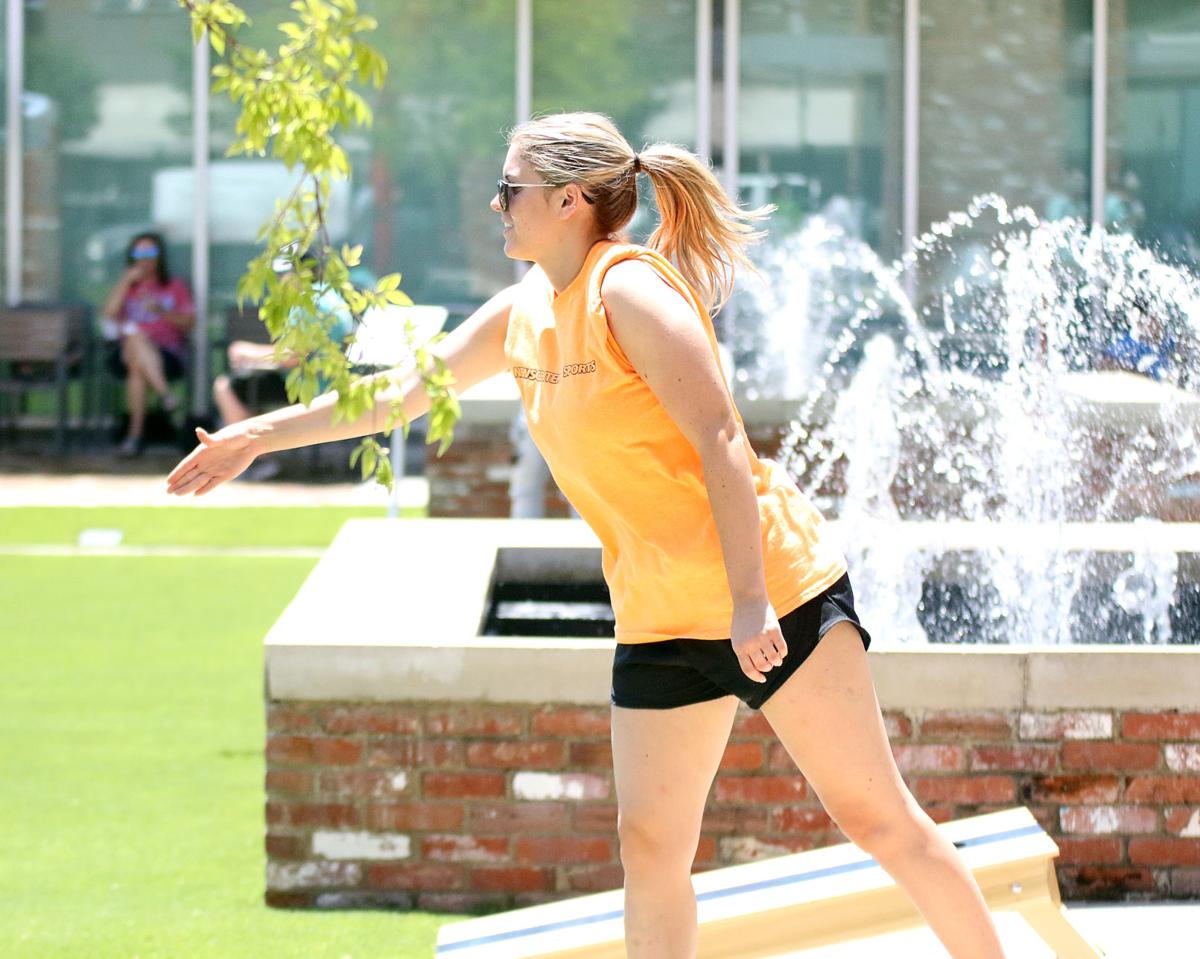 Ellie French freezes and watches her bean bag after tossing it to the opposite board during a practice round.

Chad Stout was introduced to cornhole the same way many other people are: during a tailgate.

Saturday morning, Stout, a recruiting flight chief for the Air National Guard, was at The MAX competing in the State Games of Mississippi’s first cornhole tournament. Having played cornhole — in which competitors toss bean bags at boards from a distance trying to get the bean bags into the boards’ holes — for several years now, Stout said he couldn’t pass up an opportunity to both meet new people and talk trash amongst his friends.

“The good thing about this sport is it doesn’t take long to pick it up. Plus, you don’t need to be in peak physical condition,” Stout joked.

His teammate, Chuck Harrison, said he enjoys trash talking his friends when they play cornhole, and disrupting the flow of his opponents to get under their skin is one of his main strategies.

“We try to throw each other’s games off,” Harrison joked. “When someone is a rhythm and they’re hitting the hole, you either stop or go walk around.”

Many are familiar with cornhole due to seeing it at tailgates or other group functions, or on boardwalks at the beach, but some people might not know it’s called cornhole.

“It’s mobile,” Stout said. “You can pretty much set it up anywhere.”

Said Harrison, “At family reunions or gatherings, you can put a table out and everyone will start playing.”

WTOK sports anchor Ellie French is usually covering State Games events for her job, but she signed up as a competitor Saturday morning after her coworker Travis Pettis mentioned wanting to compete in the State Games track and field event later this summer. Having been introduced to cornhole as a student at Penn State, French said she was inspired by Pettis’ desire to participate in a competition, and cornhole was an easy choice.

“It’s fun to play it at tailgates, and you want to keep playing because it draws you in,” French said.

It’s a different role for French, and it’s one she enjoys.

“Sometimes I shoot different sports and wonder how it would feel to actually compete.”

Like bowling or golf, it’s also a sport that can frustrate you easily, which is why French tries to take a laid-back approach when she competes.

“At first I’ll get frustrated, but once I get in a rhythm and get more confident I realize I don’t have to take it so seriously and can have fun, that’s when I tend to do better,” French said.

There’s also a physical strategy as well, which competitor Dan Murphy outlined as a long-time player.

“Really it’s about keeping a flat bag and getting a good spin on the bag and keeping it flat, which helps with your accuracy,” Murphy explained.

The strategy isn’t foolproof, however.

“Not by any means,” Murphy said with a chuckle. “Everybody has their own ways of doing it, their own strategies, and you can see it out here. There are different throwing techniques for everybody. You just have to find out what works for you.”