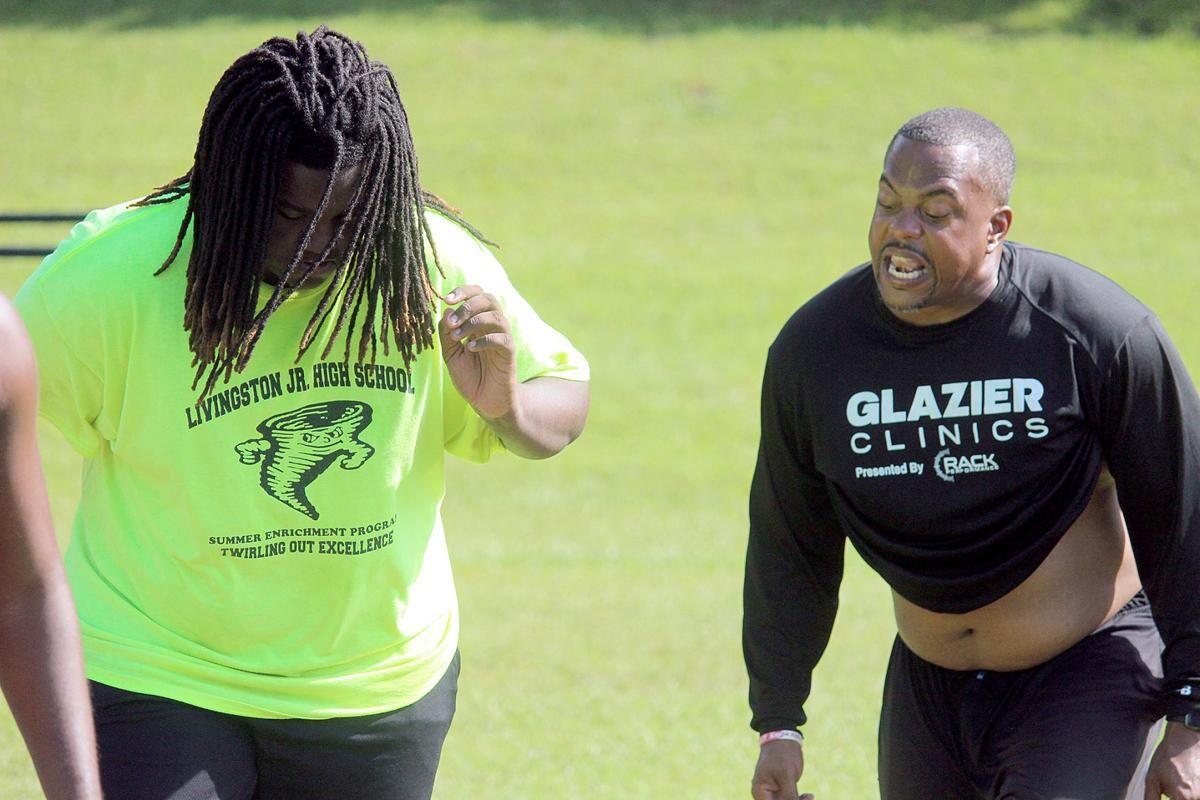 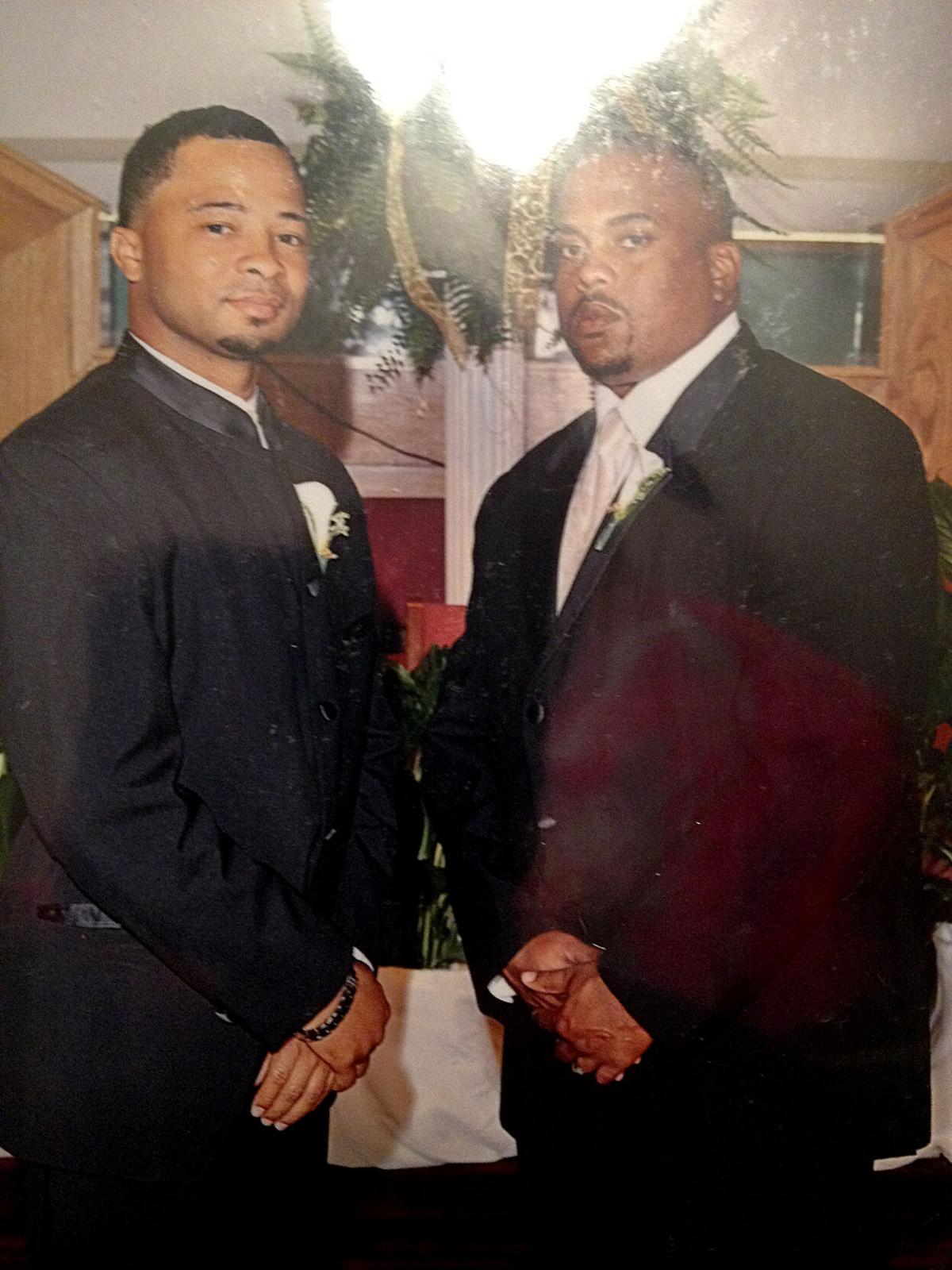 Centel Truman, left, is pictured with Calvin Hampton at Truman’s wedding on June 13, 2009. Truman is an assistant coach for the Southeast Lauderdale football team and has known Hampton for two decades. 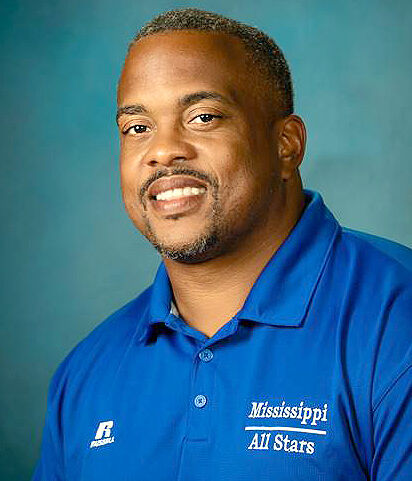 James Miller met Calvin Hampton in middle school during a time when the bull-in-the-ring football drill was still legal.

That feistiness that caused him to wreak havoc during those bull-in-the-ring tackling drills stuck with Hampton throughout his life. Hampton found a calling in coaching football, which allowed him the opportunity to both impact kids in his hometown of Meridian as well as fuel that competitive fire after his playing days were finished. Those two goals defined him, said Miller, who was on Hampton’s staffs at both Meridian and Southeast Lauderdale high schools as defensive coordinator.

Hampton was killed Oct. 21 in a car accident near Southeast Lauderdale. A memorial service honoring Hampton took place Friday at City Hall. The loss leaves those who knew him heartbroken. When they all talk about Hampton, though, the fondness they feel toward him offers some measure of solace. To Miller, Hampton was a friend, a mentor, a boss and a comrade in the coaching ranks.

“I’ve been with him a long time,” Miller said. “I believed in him and his vision, which is similar to my vision.”

Referencing his time as a dean of students at East Central Community College, Miller explained that his No. 1 goal has always been to help kids in all areas of life, and that’s something for which Hampton also had a passion.

“He wanted to make sure that when you were 40 and had a wife or husband and stuff starts getting hard, you have the mentality to overcome that,” Miller said.

Hampton also wanted to beat you, and that wasn’t just as a football coach.

“I don’t cared if it was dressing, he was competitive in who would be dressed the best,” Miller said, laughing. “If you’re throwing a paperclip on the table, he wanted to be the best at it.”

Following the 2015 season, after many years as an assistant coach at MHS, Hampton was named head coach at the school from which he graduated in 1998. He served in that role for three seasons before resigning and eventually taking the head coaching job at Southeast Lauderdale in 2019. After serving as his defensive coordinator at MHS, Miller was contacted by Hampton about the possibility of continuing his coaching career in the Lauderdale County School District.

“He was at that point undecided about whether or not he wanted to be a head coach again,” Miller said. “I asked him what he was doing it for, and he said it was for the kids and to help the kids, and I told him, ‘Well, they need help at Southeast, too.’ He said, ‘Say no more.’”

Hampton accepted the job, and that gave Centel Truman, a long-time coach at Southeast Lauderdale, the chance to work with Hampton, someone whom he had known for 20 years.

“He was in my wedding, and I was there for his daughter’s birth, and he was there for the birth of both of my children,” Truman said. “We even shared a classroom. He’s more than a friend; he’s a brother, and it takes a lot out of me because I lost a brother.”

Like Miller, Truman said Hampton’s competitive nature was apparent in everything he did at Southeast Lauderdale, and it went hand-in-hand with a level of confidence that rubbed off on people.

“He was the most competitive person and the most optimistic person you ever met,” Truman said. “He believes in everything he does, and he believes he can do it better than you, and he felt like whatever he taught the kids would work no matter what, and that drives the kids to want to be better.”

One instance that summarized Hampton was a story about a player at Southeast Lauderdale who was having a problem at home with his mother and wouldn’t wash the dishes. Miller said Hampton drove to the child’s house and told him they were washing dishes together.

“He called me about it and laughed afterward,” Miller said. “‘I’m at someone else’s house washing dishes, and I didn’t even do that at my house,’ he told me. He was all for the kids. It didn’t matter if they had a test, or it was about prom or something away from the school, he was there.”

Losing that kind of person is a big blow for both the Meridian and Lauderdale County communities, Truman said.

“Because of his desire to win and his competitive nature, that drove not just himself but others to believe,” Truman said. “His will to win and his drive to see others be better is what defined him, and I think the community has lost a role model to push people beyond their limits to be the best.”

Archie Gibbs, who was Hampton’s offensive coordinator at MHS, said Hampton’s leadership skills were something he came to admire after working for him.

“The kids would walk through a wall for him if he told them to,” Gibbs said.

Hampton’s passing still hasn’t sunk in, Gibbs said, as Hampton was much more to him than a former boss.

“Just with a lot of stuff that he had gone through personally, he was always able to give me good advice,” Gibbs said. “He gave me the opportunity to be a full-time offensive coordinator, and we were very successful, and we never clashed or anything as far as ideals. We were always able to find a way to work through the stress of working at Meridian.”

KEREKES: Gone too soon, Hampton’s fiery confidence will be missed

When Calvin Hampton was named head coach at Southeast Lauderdale in May 2019, he gave Elton …

Jarvis Cole was a fellow assistant coach at MHS under then-head coach Larry Weems, and Hampton kept Cole on the staff when he took over the program. Even before he was a head coach, Cole said Hampton did a lot of stuff behind the scenes that helped prepare him for that role.

“He was energetic, and he was really a problem-solver,” Cole said. “Any problems with the kids or fires that had to be put out within the program, he’d be the guy to do it. I was a young coach when I first got there, and he kind of took me under his wing and mentored me and showed me the ropes in regard to Meridian.”

Cole also said he wanted to see all the students at MHS succeed, not just his players.

“Calvin Hampton was all about the kids,” Cole said. “They were the No. 1 priority, whether it was football players or just students at the school. He had the respect of everyone in the school, and he loved being around the kids and would do anything for them. He treated every kid in that school like it was his kid. At the end of the day, you knew he loved you no matter how tough the love was — and he could give some tough love.”

His former players have a fondness for him as well. J’Mar Smith, who played quarterback at MHS and Louisiana Tech, was a Wildcat when Hampton was still an assistant coach, but he said Hampton was a one-of-a-kind person who impacted the team beyond coaching his position group, the offensive line.

“The tough and physical mentality he went by has stayed with me through this day,” Smith said. “He’s a great man, and honestly, he’s more than a coach to a lot of people. He inspired and gave hope to many who thought they never had a chance. He was always there as a helping hand and did everything he could to put everyone he had an encounter with in a place or spot to be successful. He will truly be missed.”

Mark Davis, who coaches softball at MHS, had his son Cannon get coached by Hampton in buddy baseball at Northeast Park and said that intense coaching style for which Hampton was known extended to everyone he coached, not just his football players.

“I’ll tell you, Cannon loved him and looked up to him,” Davis said. “Coach Hamp always had a smile on his face. Even as a 6-year-old, Coach Hamp pushed him just like he would one of his high school kids. After every game, win or lose, Coach Hamp would fist bump him or pat him on the head. He showed those little kids tough love.”

Cheyenne Trussell was hired as athletic director at MHS after Hampton had departed as head coach, but the two shared a friendship that stemmed from them both being graduates of the school.

“Once you play and put on that blue and white for Meridian, you kind of have a bond,” Trussell said.

Hampton had a nickname for Trussell, “Wildcat,” which Hampton called him even back when Trussell was AD at Starkville High School. The two communicated often, Trussell said, and there was even some good-natured trash talk between the two.

“Coach Hamp was very proud of his fraternity, Kappa Alpha Psi, whose colors are red and white,” Trussell said. “I pledged Omega Psi Phi, purple and gold, and I told him the only thing he ever did wrong was wear those red and white, and he said, ‘No, Wildcat, you’re the one who went the wrong way.’”

Trussell said he’ll miss those conversations, and his prayers go out to the Hampton family.

“He was always upbeat, and he had an impact on Meridian — not just Meridian football, but all of our student-athletes, other coaches and faculty,” Trussell said. “His personality was magnetic. I just can’t say enough about him.”

Arrangements were incomplete at Berry & Gardner Funeral Home for Mr. Johnny Trotter, 72, of Chester, Va., who died Thursday, Jan. 14, 2021, at his residence.

Mrs. Ileen Carroll, 87, of the Clarkdale community, passed away Sunday, Jan. 17, 2021, at her residence. She was a loving and beloved mother and grandmother. Spending quality time with family was important to her. She enjoyed cooking, growing flowers, going for walks, and reading. She is sur…

Arrangements were incomplete at Berry & Gardner Funeral Home for Mr. Joseph Kasmar, 55, of, Bailey, who died Monday, Jan. 18, 2021, at his residence.

Arrangements were incomplete at Berry & Gardner Funeral Home for Mr. Herman Norris, 80, of, Meridian, who died Sunday, Jan. 17, 2021, at his residence.