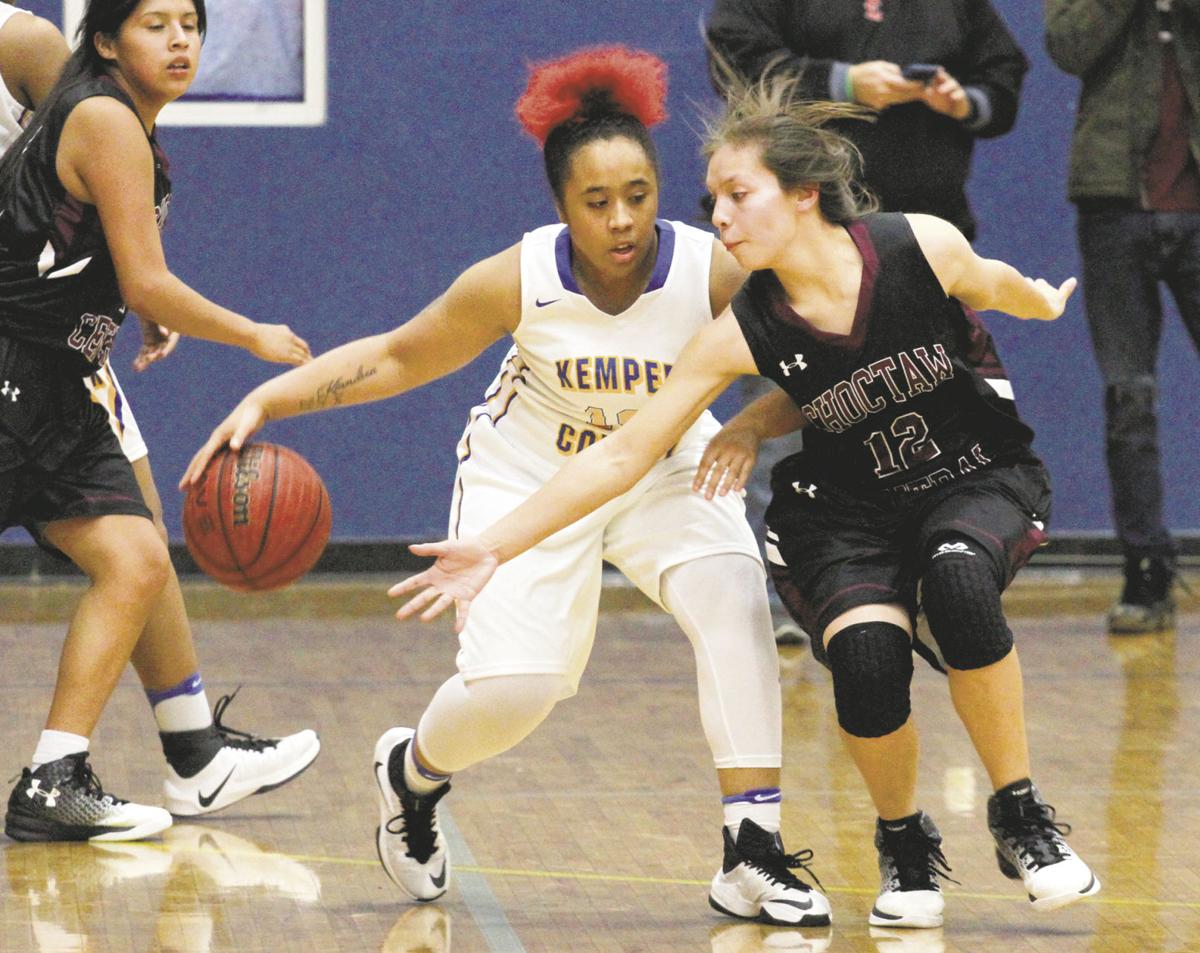 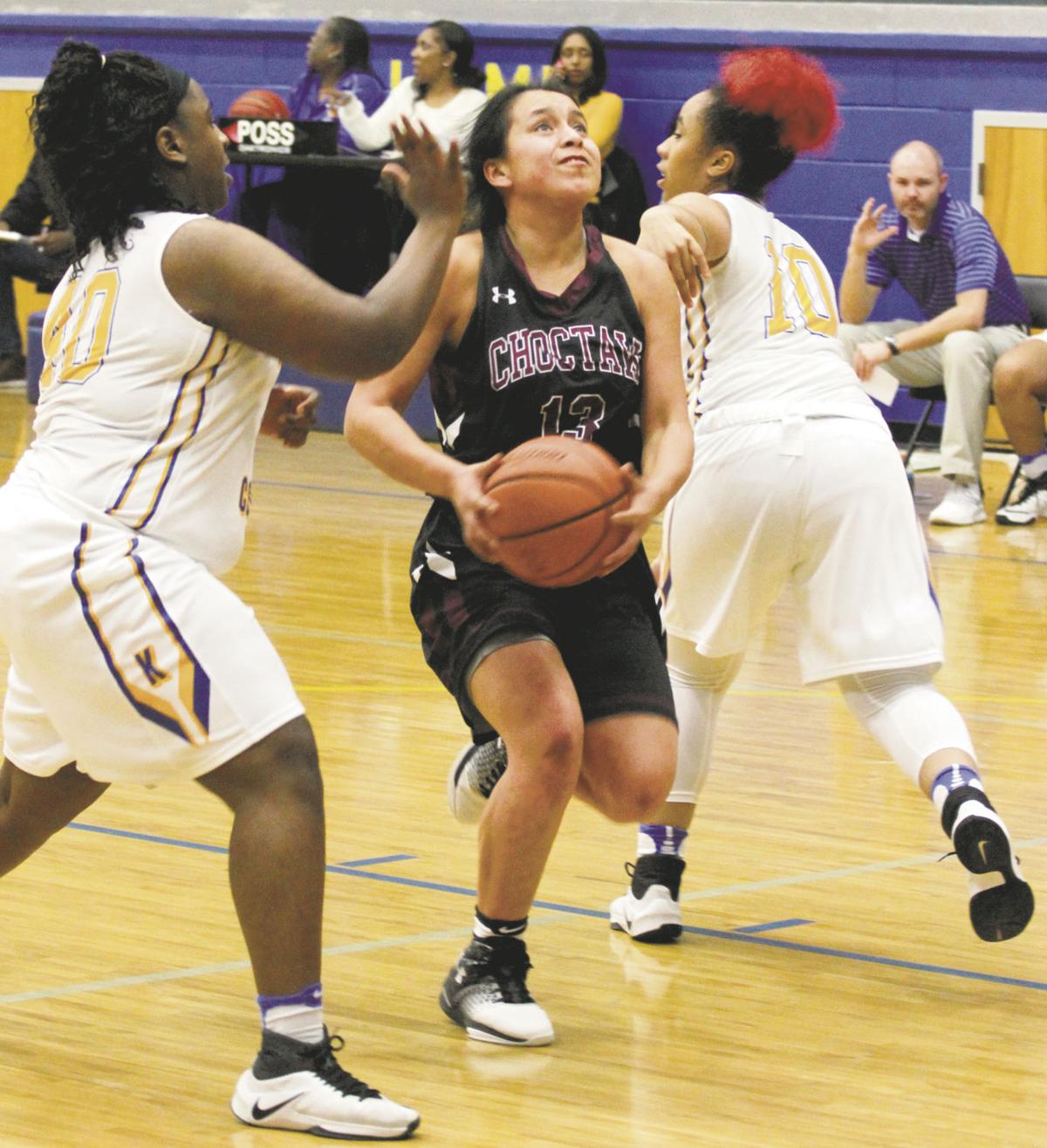 Behind the scoring of five different Lady Warriors, Choctaw Central (20-3, 5-1) built a 17-0 lead over Kemper County four minutes into the opening quarter of play Friday night. Lady Wildcats senior Mercedez Jackson finally put Kemper County (8-14, 3-6) on the board with a basket with 3:01 left in the first quarter to make the score 17-2. The Lady Warriors’ volley of shots continued to fall in the first, and they led 27-7 at the buzzer. Darien Tubby filled the stat sheet with 10 first-quarter points to lead Choctaw Central in scoring in the period, and Lachrisha Williams contributed six.

Denson opened the third quarter with a basket in the frame’s opening minute to give the Lady Warriors a 43-20 lead, and the post player added seven more points in the period. Cherry connected on two 3-pointers for Kemper County, and NeKeida Rencher, Jackson and Chamberlin added buckets, as Choctaw Central extended its lead to 65-33 at the end of the third quarter.

The Lady Warriors outscored the Lady Wildcats 18-6 in the fourth to claim the win.

“I think we made our first seven shots, and that had a lot to do with it,” Lady Warriors head coach Bill Smith said. “We didn’t think we had one of our better effort games, but when you’re up 20, it’s kind of hard to make them push. But, I thought we pulled it out in the second half and did a little better of a job.”

Chamberlin netted a team-high 14 points, Cherry finished with 12 and Jackson pitched in eight.

“It was a tough one, but we still tried to have fun even though Choctaw is good,” Jackson said. “We plan on finishing out strong in the district, and getting a good seed for the playoffs.”

“They’re one of the best teams in the state, and our effort was better this time,” Lady Wildcats head coach Jennie Vance said. “We moved the ball better at half-court this time, but it was hard to guard them… they’re just very good. But I’m proud of my five seniors. They did a good job tonight.”

With 25 seconds remaining in the fourth quarter and the score tied at 58, Kemper County’s Gus Nave went to the free-throw line with one thought on his mind.

Having withstood a senior night at home where Choctaw Central made 14 3-pointers and led by seven points in the third quarter, it was only fitting that Nave, a senior, had the opportunity to put a district foe away.

“I just knew I had to knock them down for the team,” Nave said following the win. “I was put in the situation, so I had to come through for the team. We came out hot but got slow at the beginning of the second quarter and the third quarter, so we just had to tighten up on defense.”

Nave drained both free throws, while senior Jameez Sims added another one with 15 seconds left in the contest to give Kemper County (13-8, 7-2) a 61-60 come-from-behind win against Choctaw Central.

After trailing entering the fourth quarter, Kemper County grabbed a 51-50 lead when senior Malik Jones stole a Choctaw Central (7-13, 1-6) in-bounds pass and took it the distance for a layup. Jones’ basket sent a surge of energy throughout Kemper County’s gymnasium. He ended the night with a team-high 27 points.

“That’s why we were able to win state last year, because of the mindset of these boys — it’s perseverance,” Wildcats head coach John Alan Darnell said. “They never give up. When you face Choctaw Central, they’re always going to run and shoot the ball (and) shoot 3s. We tried to hit them with every defense in the book… but this team never surprises me with their heart.”

“Sometimes it’s just your night,” Darnell said of Nickey’s performance. “I thought he was going to win the game by himself.”

Jones’ hot first-quarter shooting gave the senior nine points in the frame, and Kemper County a 21-12 lead over Choctaw Central at the end of the first. With his players struggling to find any success down low, Choctaw Central head coach Brent Farmer turned to the 3-pointer for the duration. The strategy worked. The Warriors scored 15 points in the second quarter — all courtesy of trey — and Tiger Briscoe netted all three of his free throws with 32 seconds left in the second quarter after drawing a foul to give Choctaw Central a 27-25 halftime lead.

Jones scored seven points in the third quarter, senior classmate John Dale hit two baskets and made two free throws, and Nave added a layup to whittle Choctaw Central’s lead to 42-40 with 33 seconds remaining in the third quarter. But Nickey drained a 3-pointer as time expired to give his team a 45-40 lead going into the final period.

“We started out in a little bit of trouble — Kemper jumped out on us early, but we stayed calm and played through the struggles,” Famer said. “We’re getting better at discipline, and with remaining calm. (Dylan) stepped up big time tonight and played like a senior is supposed to. I’ve always told him that his time would come. I’m proud of the overall effort of all the kids tonight.”

Nickey led the Warriors with 27 points and Dillion Farmer finished with 10 points.

Dale ended the evening with 23 points, while Nave tallied eight.

Arrangements were incomplete at Berry and Gardner Funeral Home for Mrs. Shirley Harris, 69, of Meridian, who died Tuesday, March 31, 2020 at Rush Foundation Hospital.

In keeping with the wishes of Mr. Hall and his family, there will be no services. Final arrangements have been entrusted to Berry and Gardner. Mr. Hall, 57, died March 31, 2020, at Rush Foundation Hospital.

Arrangements were incomplete at Berry and Gardner Funeral Home for Mr. George Alexander, 52, of Meridian, who died Sunday, March 29, 2020 in Meridian.