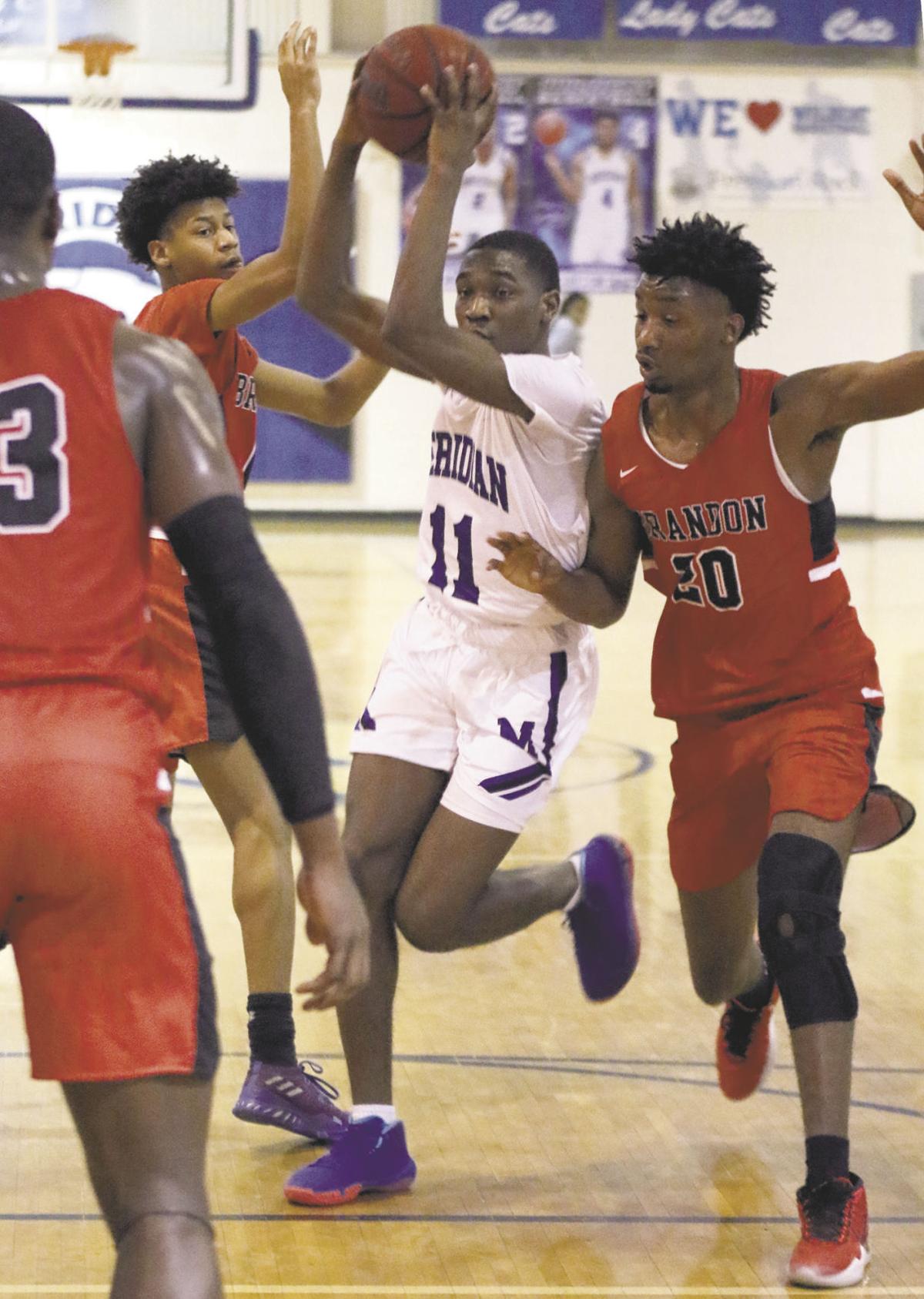 Meridian’s Jaylen Davis maneuvers his way through Brandon defenders to get into the lane Tuesday night. 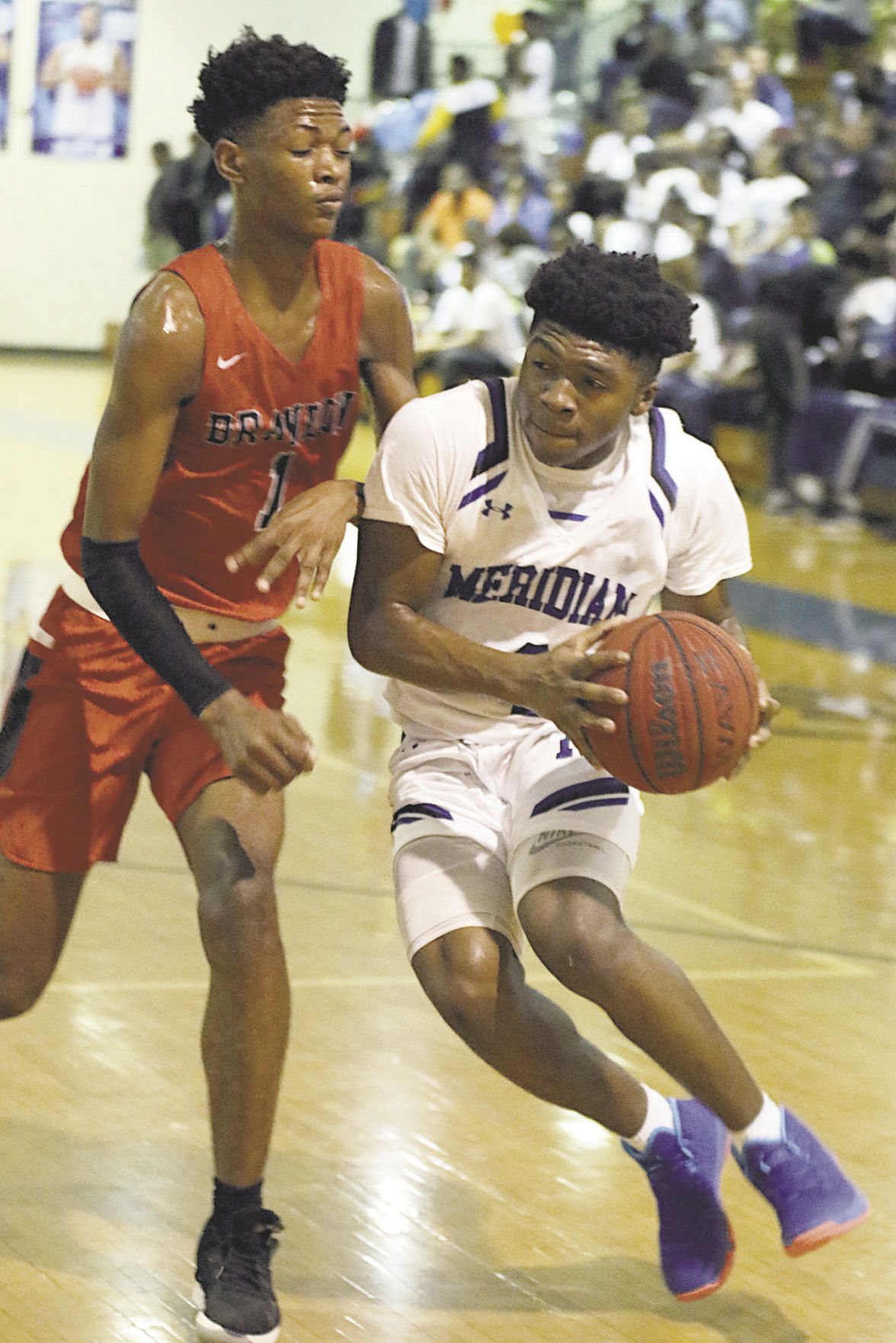 Meridian's Makeem Roberts tries to get by a Brandon defender Tuesday night.

With the playoffs looming, Jarvis Campbell picked the perfect time to begin heating up.

Behind his 20-point effort Tuesday night, the Meridian boys basketball team beat Brandon 58-41 to secure another win heading into next week’s Region 5-6A tournament as the No. 2 seed. Campbell hit four shots from behind the arc and pulled down six rebounds, and Wildcats head coach Ron Norman said his recent play is reminiscent of the run Campbell went on in last year’s postseason.

“We’re really happy for Jarvis Campbell, who has really broken out and found his stride,” Norman said. “You saw the way he’s been shooting it. It’s playoff time — all last year, we really didn’t know where he was, and then we got on our six-game run in the playoffs. He had 13, 17, 15 and 17 against Tupelo, and he basically willed us to the state championship game up there against Tupelo. He’s finding his stride, and we love it.”

Behind a pair of 3s from Campbell, Meridian opened up to an 18-10 lead after one quarter of play, but Brandon kept pace with the Wildcats by outscoring Meridian 17-15 in the second frame, including a 7-2 run in the final two minutes of the half. The Wildcats took a 33-27 lead into the break, and the first three minutes of the third quarter was more of the same as Brandon outscored Meridian 6-5 in that stretch.

But Meridian went on an 11-4 run to close out the third quarter up 49-37, and the Wildcats slowed down the pace in the fourth to help secure the win. The Bulldogs didn’t hit a field goal in the final period, scoring all four of its fourth-quarter points on free throws.

“We’re playing well,” Norman said. “The ball is moving, and we’re sharing the ball. We just haven’t finished games. We didn’t do a good job finishing right before the half when we were up 10, but we handled the end of the third, and I’m really proud of the team for getting it together. We’re so unselfish. We have 10 seniors, and nobody cares who scores the most.”

While the Lady Wildcats celebrated senior night, the Wildcats (20-5, 4-2) will host Gulfport Friday for their senior night in a boys-only matchup. Tipoff is scheduled for 6 p.m.

Ti’Ian Boler had a game-high 25 points for the Lady Wildcats as the Meridian girls won comfortably against Brandon Tuesday night.

Debreasha Powe added 18 points, including four 3-pointers, for Meridian, and Charity Hinton finished with 12 points. Arianna Patton chipped in with eight points for the Lady Wildcats.

“It was a bittersweet moment,” Lady Wildcats coach Deneshia Faulkner said. “It’s our senior night, and these are the kids who were here when I first got the job. It was just a really special game. I thought they played really hard tonight, and I’m really proud of them.”

“Each of the five seniors have really taught us valuable lessons,” Faulkner said. “They’ve been super leaders for us, and we’ll never forget the legacy they leave with this team and this program.”