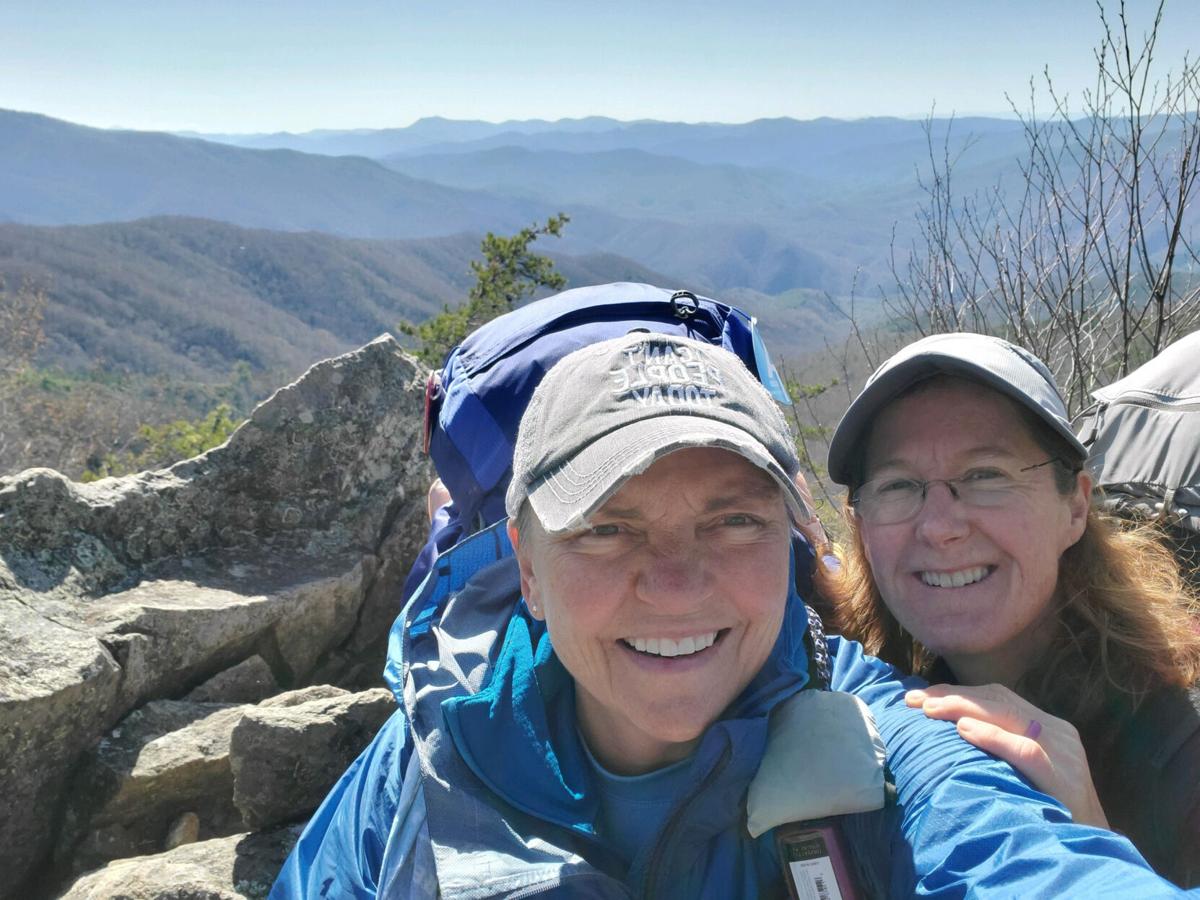 Cindy Aurin and Suzanne Holland, the “Wandering Dames,” pose for a selfie before leaving the Smokies. The duo told me that, thus far, the Smokies presented their greatest challenge on the Appalachian Trail. 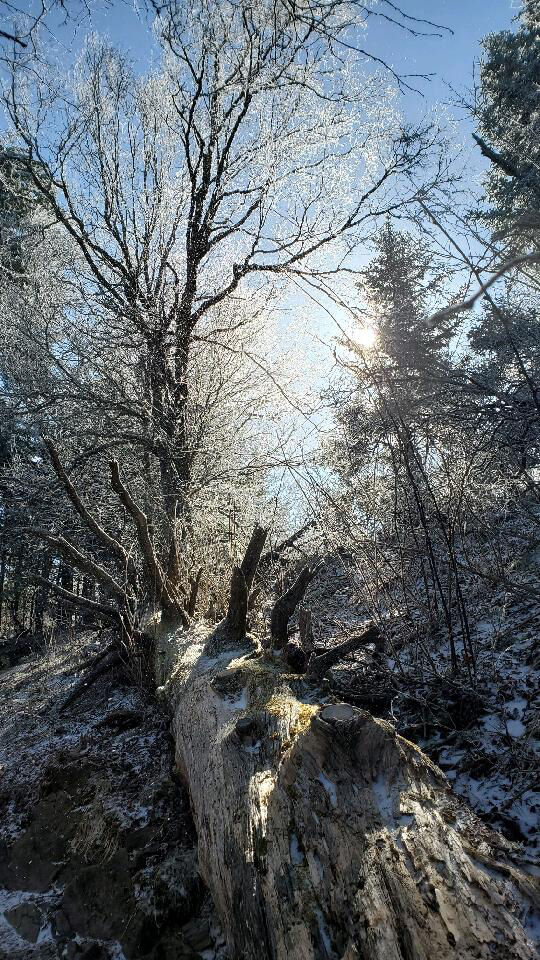 The frozen conditions made hiking in the Smoky Mountains very challenging for Suzanne and Cindy. Suzanne named this picture “The Crystallized Smokies” and that seems quite a fitting way to describe this frozen wonderland. 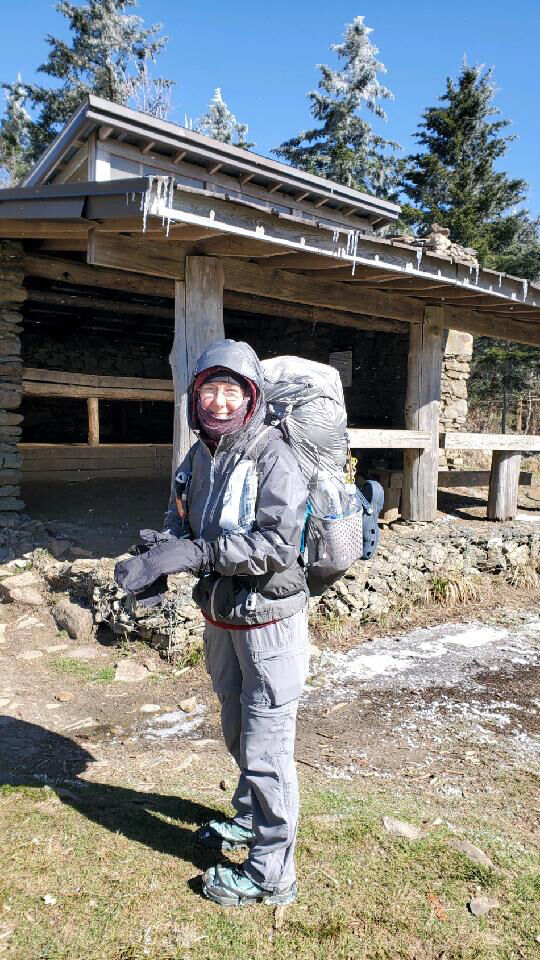 A bundled up Suzanne Holland poses in front of the appropriately named Ice Water Springs Shelter during the Dames’ hike in the frozen Smokies. 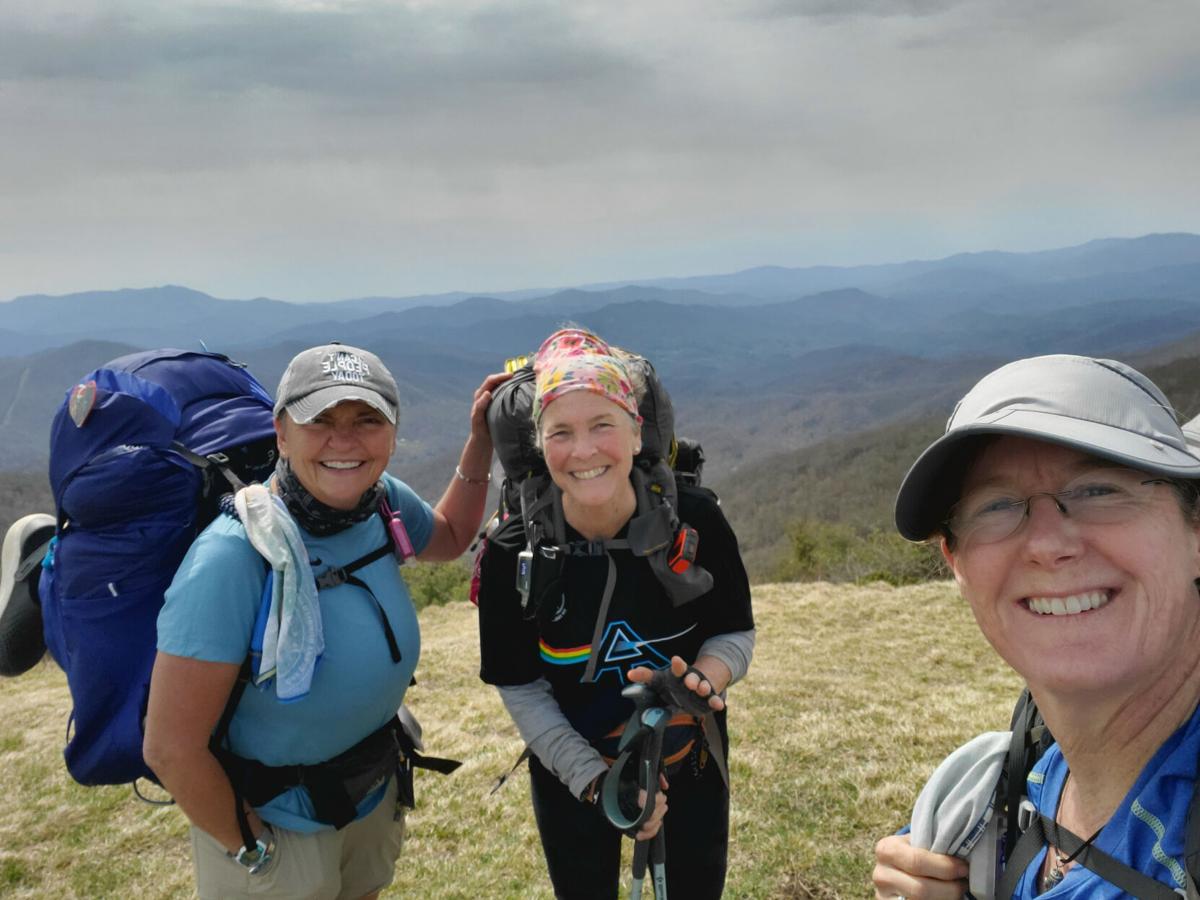 Trail names are a big part of your identity while hiking the AT. In fact, some hikers only use their trail name. Here, the Wandering Dames pause for a selfie with fellow hiker, “Tree,” after summiting Big Bald. Pictured are, from left, Cindy Aurin, “Tree” and Suzanne Holland. 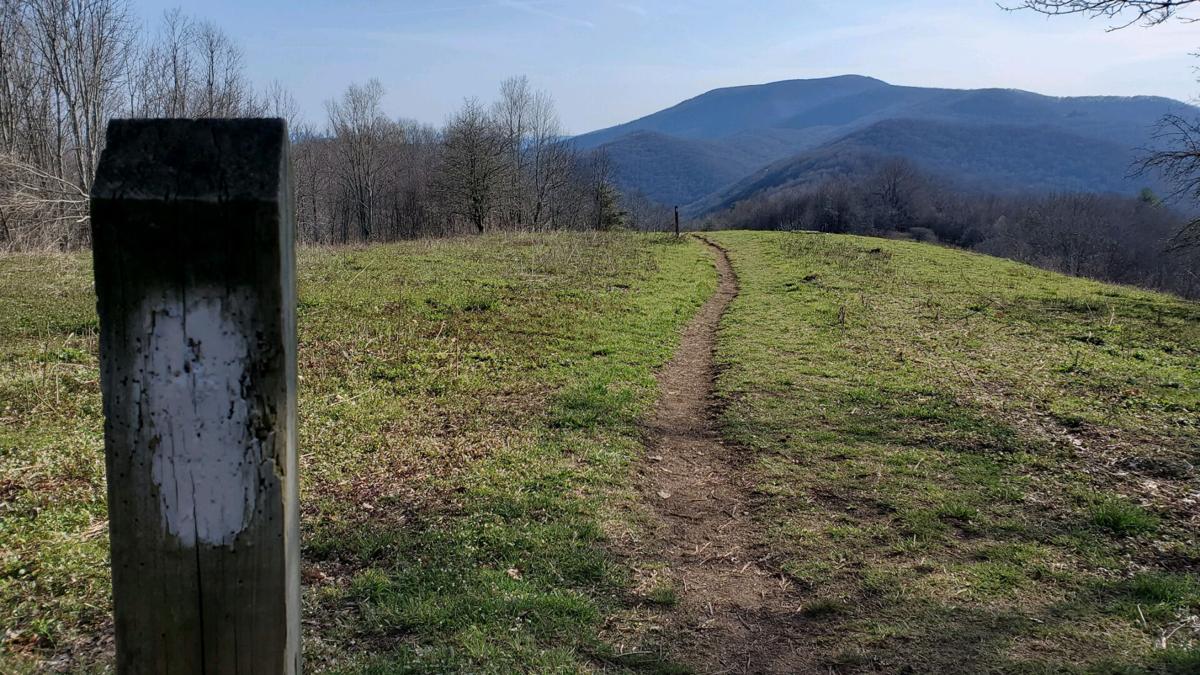 Anyone who has hiked the AT knows the familiar “white blaze” that marks the path. Pictured here is a white blaze trail marker on the ascent to Big Bald.

“It’s a dangerous business, Frodo, going out your door. You step onto the road, and if you don’t keep your feet, there’s no knowing where you might be swept off to.” —J.R.R. Tolkien, The Lord of the Rings

That quote from Bilbo Baggins always comes to mind when I’m hiking. The sense of the unknown, the wonder of what lies around the next corner of an unfamiliar trail has always been appealing to me.

I’ve mentioned that from the moment that my feet first touched the dirt of the Appalachian Trail, I have dreamed about hiking it in its entirety. There is something about that path that inspires a wanderlust inside of me. Most recently, I’ve been scratching my itch to wander by following the journey of our friends Suzanne Holland and Cindy Aurin as they thru-hike the AT.

I caught up with the duo, known on the trail as the Wandering Dames, last Friday. They were taking a couple of zero days (days with no hiking) in Erwin, Tennessee, to rest, resupply and get their second COVID-19 vaccination in nearby Johnson City. We talked about their “part-two” thru-hike in 2021, as well as the difficulty of having to come off the trail last year due to COVID.

As meticulous as I am in planning each section hike that I undertake, I appreciate the level of planning that goes into mapping out a thru-hike that can last six to eight months.

“COVID changed everything for all of us, including thru-hikers on the AT,” Holland said. “We expected that we might get sick because of Giardia or Lyme disease. We anticipated the possibility of breaking an ankle, however, on the list of possible scenarios was not a pandemic.”

At what point did they start to consider the possibility of returning to the trail in 2021? According to Cindy, “At first, when we first got off, we didn’t really think this year. I thought maybe five years down the road, and Suzanne was like, ‘I don’t want to wait five years.’”

Suzanne added, “Getting back on the trail was something that we never lost sight of, it was just a matter of when we were going to be able to do it.”

When I asked the couple what their biggest challenge has been thus far, they agreed that it was hiking in the Smoky Mountains.

“We experienced all the elements from nice weather to rain all day,” Cindy explained. She went on to say that the trail there is different. “It’s like a trench and when it does rain that all turns into a big crick (creek for the Mississippi folks).”

Due to the weather in the Smokies, the hikers found themselves stuck in Gatlinburg a little longer than anticipated. When they resumed their hike at Newfound Gap, it was cold and windy, and the trail had morphed into a frozen river of ice.

As you might imagine, hiking on ice with a heavy pack adds a new set of challenges. However, undeterred, the Dames broke out their crampons and carefully trekked on. Cindy summed up the difficulties best, explaining, “There was not a lot of room for error.”

Aside from the ice and nights well below freezing, the hikers told me that they have been blessed with stunning weather thus far. In fact, in as much as they have a schedule, they are on track.

“Our goal is to finish at Katahdin, and there’s a date for that: October 15 traditionally is the date that they close the park,” Holland explained. “We don’t have a timeline other than we have to get there before then.”

The finish at Mount Katahdin will hold special meaning. For one, it will mean the culmination of a 2,200-mile walk from Georgia to Maine, but as an emotional Suzanne explained, it will be much more.

“My mom passed away unexpectedly in October,” Suzanne said. “We both believe that things happen for a reason, whatever your faith is. I was able to see my mom four more times before she passed away, and that was a blessing. If I had been hiking last year, I wouldn’t have seen her. I’m taking some of her ashes, and I plan to spread them at Katahdin.”

I told her that I fully understand that sentiment, as I have felt since the loss of my father-in-law that Pop is with me on every hunt.

“She’s with me when I’m hiking. We’re having conversations for sure,” she said.

I told the Dames that we would catch up with them again at Harpers Ferry, the midway point of their hike, and again when they reach Katahdin. In the meantime, if you would like to follow along, check out their YouTube channel “Wandering Dames” and Cindy’s “Wandering Dames” blog at trailjournals.com. Until next time, I look forward to seeing you out there in our great outdoors.

Graveside services for Infant Jamari Kelly will be held on Monday, May 17, 2021, at 11 a.m., at Sunset Cemetery, Meridian. Arrangements entrusted to Berry & Gardner Funeral Home. Visitation: None.

Arrangements were incomplete at Berry & Gardner Funeral Home for Mrs. Helen Williams, 82, of Meridian, who died Thursday, May 13, 2021, at her residence.