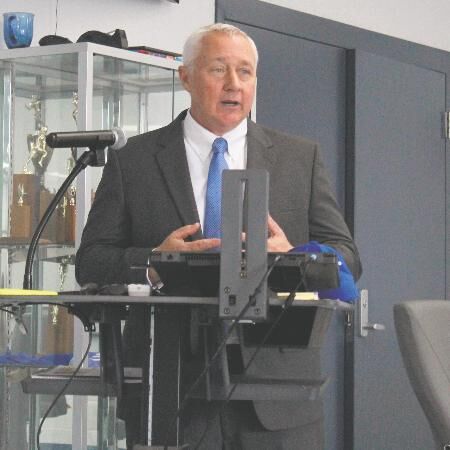 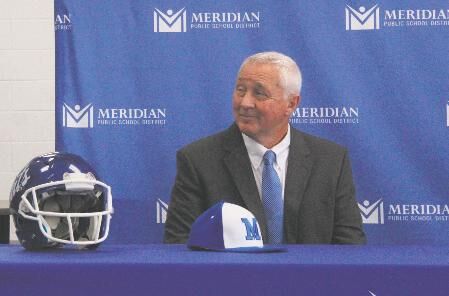 Marcus Boyles is introduced at a press conference at Meridian High on Wednesday, Jan. 18.

A press conference was held at Meridian High on Wednesday to introduce Boyles, and both Boyles and Trussell highlighted the importance of focusing on improving the football programs at Northwest Middle School and Magnolia Middle School.

There was a disconnect between the Wayne County High School football program and its related middle school teams when Boyles first coached there, and he sees a similar problem at Meridian.

The longtime coach went 127-21 in 11 seasons as head coach at Wayne County, so applying his strategy of investing in middle school programs could help turn around Meridian’s team over time.

“We’ve got to bridge that disconnect. Once we do that, I think that’s when you’ll see us start moving in the right direction,” Boyles said.

John Douglass led Meridian to a 4-5 record in 2022 before stepping down in November, so an obvious step in the right direction would be posting winning seasons going forward.

“I want to thank John Douglass for the groundwork he’s laid for where we are today, and I want to get us to the next level,” Boyles said.

Meridian High’s new coach has plenty of experience at the next level of high school football. In 27 years as the head coach of Taylorsville, Pearl, Wayne County and Petal, Boyles racked up a 294-71 record and won five of nine state championships his teams appeared in.

Boyles has been out of coaching for two years, but his goals are still sky-high. He wants to lead a team that is so well-coached and plays so hard that Meridian is mentioned as a perennial championship contender.

Boyles plans to tap that gold mine by getting current and future players into the weight room and into offseason training programs.

“We’ve got to get those kids lifting weights,” Boyles said. “We can’t wait until they get in the ninth grade to get into the weight room, because they’re not doing that at Brandon and Oak Grove.”

He also plans to increase interest in football among the middle schoolers so they will play for him once they get to Meridian High. One way Boyles will accomplish this is by standing on the sidelines at the middle schools’ home games.

Trussell said he wants to see Ray Stadium filled up with fans on gameday. Success on the field would help fill seats, but so will Boyles’ strategy of getting elementary students excited about Meridian football.

“I want our first and second and third and fourth-grade kids to be excited about coming to football games. Those little boys can’t wait to be a Wildcat,” Boyles said.

Considering the focus on improving Meridian football from the ground up, it may take some time to turn around the high school’s program.

Boyles does not officially arrive on campus until February, but Meridian’s current coaches are already preparing the Wildcats for the upcoming season. In his first season as Meridian’s coach, Boyles is looking for his team to improve between the first game against Quitman and the last game against Pearl.

However, the successful veteran coach is a self-admitted sore loser, so he wants to get his new squad to the top tier of 6A as soon as possible.