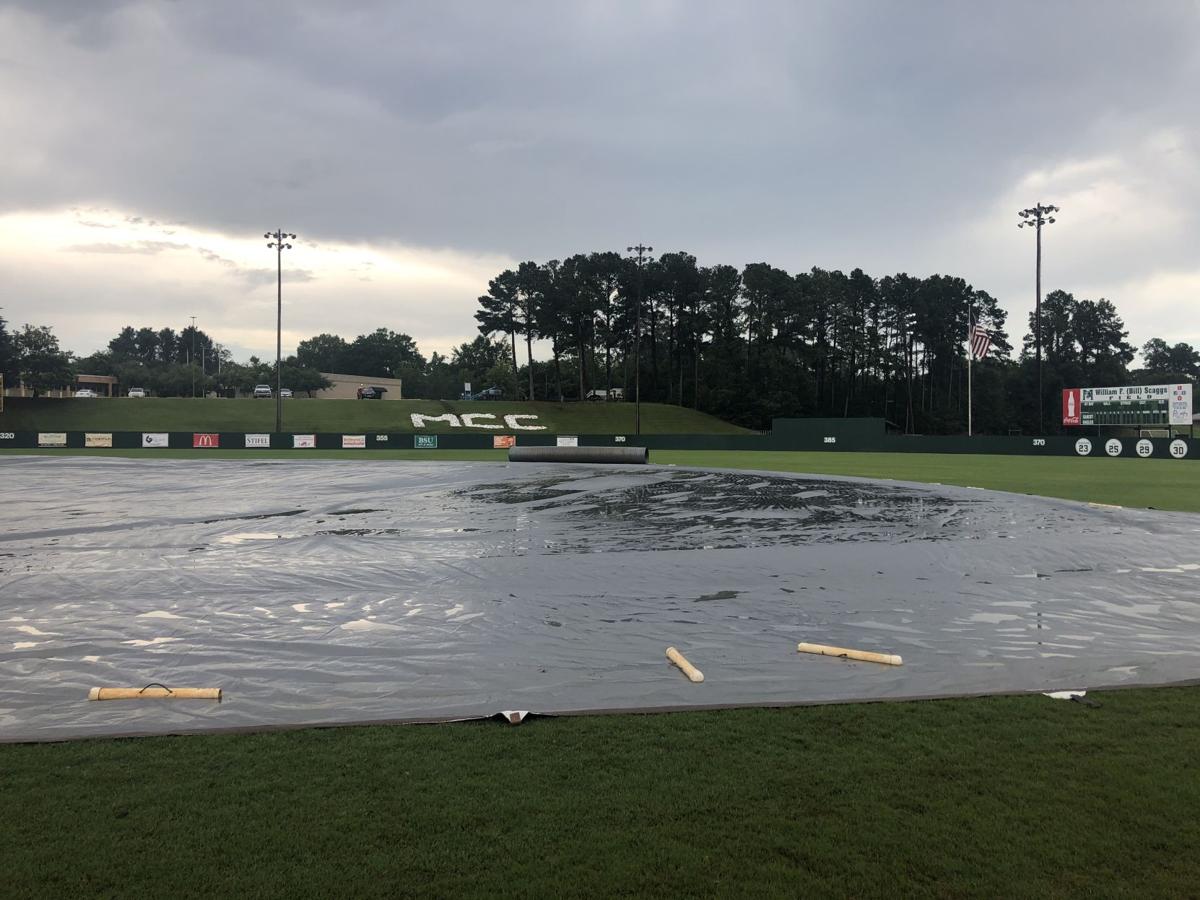 A tarp covers the infield of Scaggs Field on Thursday at Meridian Community College. 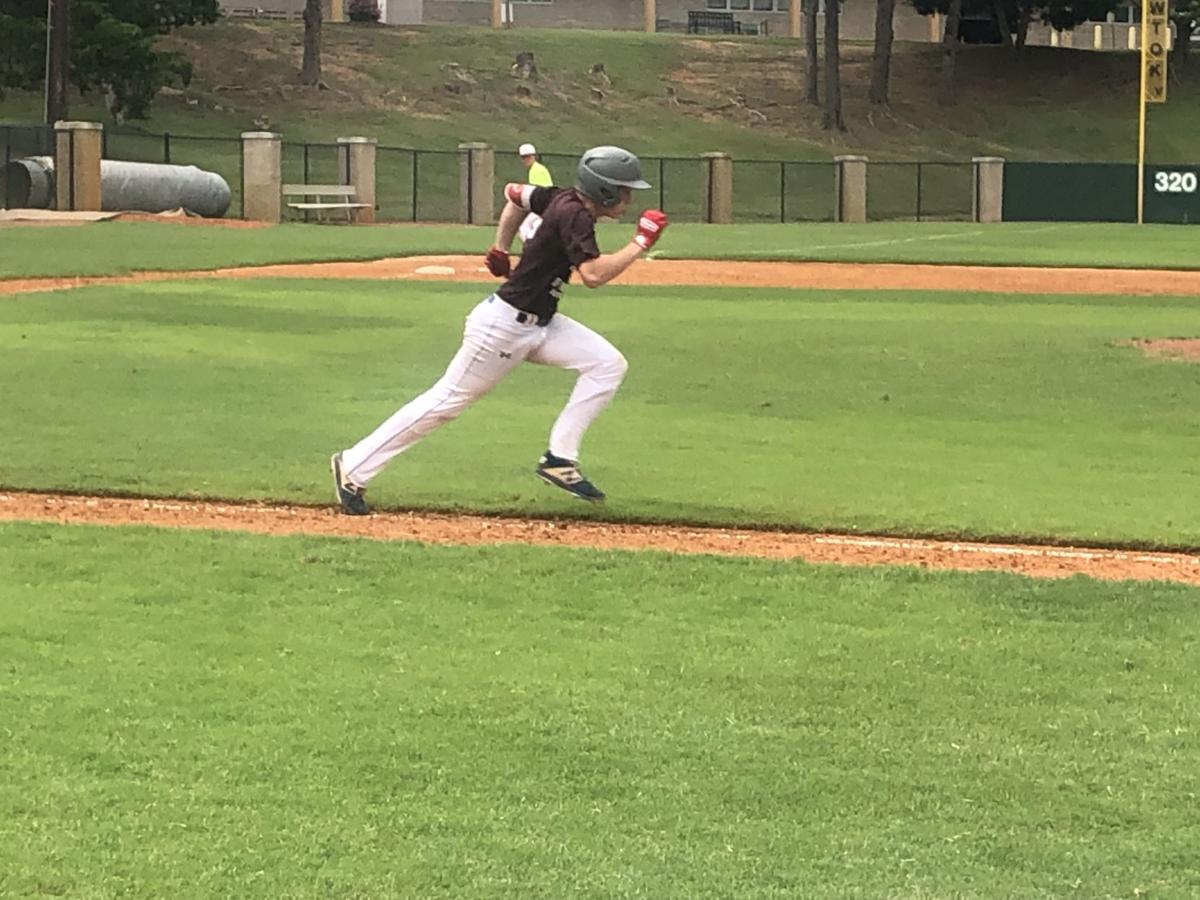 Neshoba Central outfielder Cade Hall runs down the first-base for line for District 4 after hitting a ball into the outfield during the State Games of Mississippi's All-Star baseball tournament Thursday at Meridian Community College.

The State Games of Mississippi’s All-Star baseball contest between its District 4 and District 6 teams had one inning to play Thursday, with District 4 looking to pull even.

After getting on the board first in the opening frame, District 4 went silent before driving home a run in the sixth to move within two of its opponent, 5-3. Once the frame concluded, however, the tarp  was dragged onto the infield of Meridian Community College’s Scaggs Field, and baseball was finished for the day.

“They’re not ideal circumstances, but that’s baseball,” District 4 head coach Jordan Smith said. “You’ve just got to hang in there and control what you can control, and the weather’s something we can’t control, so we just have to refocus, regroup and come back in the morning ready to play.”

District 4’s roster carries a trio of Neshoba Central players this year, including senior outfielder Cade Hall, who went 0-for-3 batting leadoff and sent a well-hit pitch into the outfield that was tracked down for the flyout. Senior Daygan Martin and junior Reid Hall, also members of the Rockets, didn’t see playing time.

“I hit one hard; he made a good play on it,” Cade Hall said. “So I’ll just keep my head up and just keep swinging.”

With the matchup already pushed back an hour because of an earlier rain relay during the previous game, extra hitter Zac Butler (New Hope) gave District 4 the first lead of the game with a two-run double in the bottom of the first, sending home Manning Huffman (Oak Hill) and Alex Schuster (Ethel). District 6 responded immediately in the next half-inning with two RBI singles from Austin Robinson (Florence) and Colton Hegwood (Brandon), and Blake Summerlin (Northwest Rankin) reached base on an error to score Waylon Sebren (Puckett) to go up 3-2.

District 6 added two more runs in the fourth when Summerlin and Preston Soper (Germantown) drove in Hegwood and Connor Chisolm (Madison Central). A second double by Butler and a single by Loren Cox (Caledonia) on consecutive at-bats with one out put two runners on base for District 4 in the home half of the frame, but back-to-back groundouts ended the push.

Schuster picked up a walk in the sixth and then scored two batters later on Butler’s third hit of the game to cut District 4’s deficit to 5-3 heading into the last inning. The contest was then delayed because of rain for more than an hour and a half before being postponed to 10 a.m. Friday due to field conditions.

“We felt good. We were getting our runs back, and then it rained. It kills you. That rain just stops your momentum from going on and actually trying to win this game,” Cade Hall said. “It just (stinks). We played six innings, and we could’ve had a chance to win it in the last one. I guess we’ll find out tomorrow if we can win it.”

Butler earned the only multi-hit performance for District 4 on the day. He finished 3-for-3 and batted in all three of his squad’s runs. Starting pitcher Reed Hale (Eupora) gave up five runs on seven hits, one walk and struck out four in four innings.

“We started out well. When you can score first, it puts the whole team at ease,” said Smith, who serves as head coach for East Webster. “When you play good teams you’ve got to play a complete game, and we’re really close to playing a complete game, so I’m pleased overall.”

Hegwood ended 3-for-4 for District 6 with a run and an RBI, while Summerlin collected two RBIs. Bryce Fowler (Germantown) struck out two batters and allowed two runs on five hits in four innings on the mound.

District 4 will play a second game at 1 p.m. Friday against District 2. The postponed All-Star matchup between District 8 and District 5, which features eight players from Newton County, West Lauderdale and Clarkdale, will take place at 10 a.m. Friday at Clarkdale High School.

This game was completed Friday morning, with District 4 losing to District 6, 9-3. District 4 rebounded with a win Friday afternoon against District 2, 3-2.