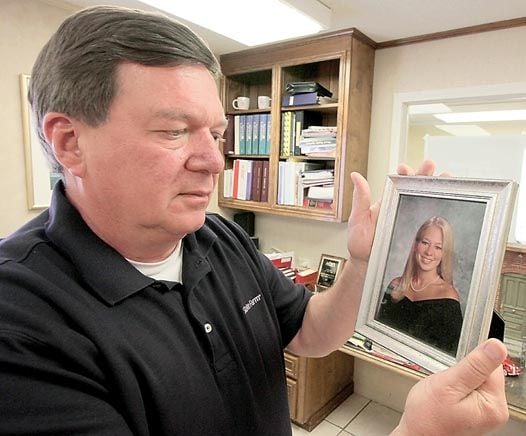 Dave Holloway poses with a photograph of his daughter, Natalee, in his office in May, 2015. May 30, 2015 marked the 10-year anniversary of the teenager's disappearance while on a high school graduation trip in Aruba. 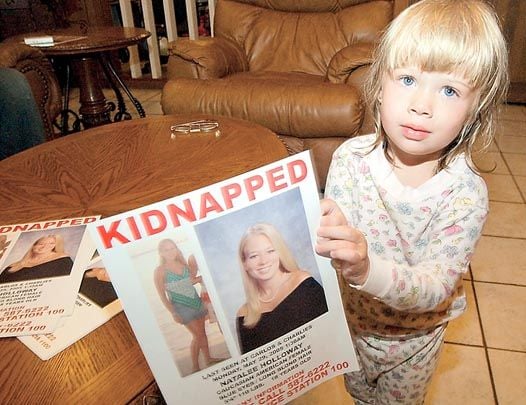 Kaitlyn Holloway, pictured here 10 years ago at age 2, holds up a missing poster of her sister Natalee.

Dave Holloway poses with a photograph of his daughter, Natalee, in his office in May, 2015. May 30, 2015 marked the 10-year anniversary of the teenager's disappearance while on a high school graduation trip in Aruba.

Kaitlyn Holloway, pictured here 10 years ago at age 2, holds up a missing poster of her sister Natalee.

While a recent visit to Aruba proved futile in hopes of locating the body of his missing daughter, Natalee Holloway, Meridian resident Dave Holloway said he has no regrets about making the trip.

"I had to go, and I did," Holloway said about going to Aruba earlier this month to pursue a tip passed on by authorities from a man who previously claimed to be a witness to his daughter's disappearance.

Natalee Holloway was on a high school graduation trip when she vanished May 30, 2005. The 18-year-old from Alabama was last seen leaving a bar with Joran van der Sloot, a Dutchman raised in Aruba who is the chief suspect in her disappearance.

Dave Holloway is an insurance agent in Meridian and attends cheer competitions with his wife, Robin, and their two daughters, Brooke and Kaitlyn. And with the birth of his son Matt's daughter several months ago, he became a grandfather for the first time.

"That's something I'm still getting used to," he said of his "grand" title.

But Holloway's thoughts are never far from seeking justice for Natalee.

"You know what really gets me is that young kids, they try so hard. In school, they try to make good grades – she was a straight-A student and really had a plan for what she was going to major in and what she was going to do in life. And then she goes on a trip and five days later – gone," Holloway said. "That's the part that's hard."

Saturday will mark 10 years since Natalee's disappearance. Holloway said he has no plans for a memorial service.

"I've buried her so many times in my mind that it's unbelievable," he said. "You get to where you have to let go sometime, and that's part of the closure process. You can't just keep reliving it."

He dismisses references such as "anniversary" to the length of time of his daughter's disappearance.

"I've always thought of an anniversary as a celebration," he said. "It's hard to comprehend that it's been 10 years, and we certainly won't be celebrating."

Holloway's recent visit to Aruba was his first time back to the Caribbean island since 2010.

"The first year Natalee went missing, I was there three or four months off and on. And then I would go there several times a year in the following years as new leads would come up," he said.

When a new prosecutor in Aruba took over the case, reviewed the files and contacted Holloway about a tip, he decided to return.

"The new prosecutor allowed some of the Dutch people in Holland to review the 2,000 pages of police files and they called me and said, 'We see some discrepancies in this police investigation and thought we would call you and ask some questions. And by the way, there's this supposed witness who says she's buried under the Marriott Hotel in Aruba,'" he said.

According to a story by The Associated Press, the witness, identified as Jurrien de Jong, insisted that Holloway was buried under a staircase of the Marriott Hotel in Aruba. Holloway said he is unsure whether he believes de Jong.

"I spoke with the guy back in 2008 and I didn't believe the story then," Holloway said. "Then he came back restating the same story. I'm still listening to him, but as I've told everyone, I'm not jumping off in the water yet."

According to the AP story, de Jong's claims led chief prosecutor Eric Olthof to ask that Aruba police contact Marriott's management office in Orlando, Fla., to determine when the hotel's Spyglass Tower and its staircase was built. Marriott officials said neither the tower, not its staircase had been built when Holloway disappeared, prosecutors said.

"This means that Natalee Holloway could never have been hidden and/or buried there," officials said in a statement, according to the AP. "This leads to the conclusion that the claims made by Mr. de Jong ... cannot be correct, and that his testimony ... does not add to the solving of this case."

"It shows that in June of 2005 – which would be less than 30 days from her disappearance – the building had already started," he said. "It's like, 'What's going on here?' So, we're looking at that now to see if that is true or if something else is going on."

Holloway said he had three assumptions the first time he arrived in Aruba after learning that his daughter was missing.

"First I thought, 'The police are going to do the right thing and do a proper investigation,'" he said. "And when I found out that Joran's dad was a judge, I said, 'Well that's great! He's going to abide by the legal system and make sure everything's done right.' And my third thought was these kids are 17-18 years old and I knew right away that they knew something; and I was right. I figured the police would do their jobs and be able to crack three kids easily.

"I also thought that usually somebody talks. The word gets out, there's a lot of rumors and somebody's going to tell on somebody. But that's never happened," he said.

Over the past decade, there have been several leads, as well as conflicting statements from van deer Sloot about what happened to Natalee Holloway – none of which have revealed anything substantial.

Van der Sloot pleaded guilty to the 2010 murder of a woman in Peru killed five years to the day after Natalee Holloway disappeared, according to the AP. He was sentenced to 28 years in prison, which, Holloway said, provided some solace to him and his family.

"I think that was the moment that I knew we were going to get the best sense of closure that we could," he said. "Knowing that he was in jail – not for our situation, but you kinda compromise it in the fact that, at least he's in jail and he'll be thinking about it for at least 28 years. He's living in unfavorable conditions in one of the roughest prisons in the world. If he was in Aruba, he would have air condition and heat, three meals a day and access to a cell phone. Maybe God does serve justice in some way."

Holloway said it was also important to move forward for others – particularly, his family.

"There's other family members in the household and you've got to strike a balance; you can't forget about them," he said. "I had to make sure that I didn't focus all on one child, when I had three others in the household who also needed my attention."

Holloway has shared those words with others in similar situations who have reached out to him – from close to home to across the country.

"So many young people in some unfortunate way have lost their lives; that really gets to you," he said. "I've had so many conversations with parents who have a son or daughter missing and I try to help them with the process of moving forward. Time heals a lot."

Having endured one of a parent's worse nightmares, and in the midst of graduations and young people embarking on trips unaccompanied by parents and other family members, Holloway offers the following advice to young people:

When Holloway returned to the island where Natalee vacationed with friends a decade earlier, he was accompanied by a detective and cadaver dog.

"Although the lead was not in my theory of what happened, I had to pursue it and see if we could find something," he said.

"Unfortunately, we weren't allowed access to where we wanted to search, but I feel better having tried," he said, assuring it won't be his last attempt to find out about his daughter's disappearance.

PACHUTA [ndash] Arrangements were incomplete at Berry and Gardner Funeral Home for Mr. Dempsey Bender, 66, of Pachuta, Miss., who died Friday, Feb. 7, 2020, at his residence.

ENTERPRISE [ndash] Services: Saturday, Feb. 22, 2020, at 2:30 p.m., at New Fellowship Baptist Church, Enterprise. Burial will follow in the church cemetery with arrangements entrusted to Berry and Gardner Funeral Home. Visitation one hour prior to services.