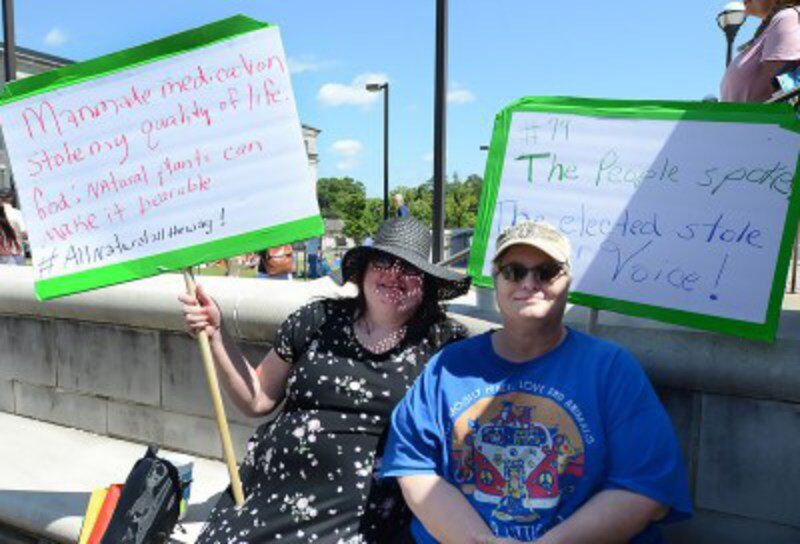 Carlene Eaves (left) and Carolyn Prisock, traveled from Louisville to attend the We are the 74 Rally held outside the Supreme Court building Tuesday in Jackson. 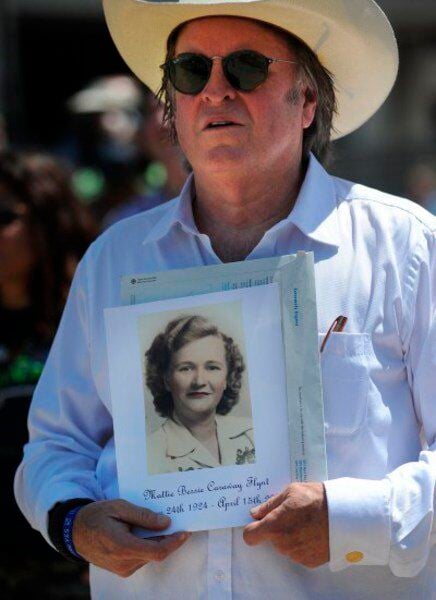 ‘I was bootlegging edibles for her. Those opioids would leave her depressed,’ said retired pharmaceutical industry worker Ken Flynt of Bailey, holding a picture of his late mother Mattie Bessie Caraway Flynt.

Carolyn Prisock had a brain tumor removed 15 years ago, and suffers debilitating migraines and side effects from medications — one caused her to temporarily lose her eyesight.

Prisock was hopeful that the medical marijuana program Mississippi voters approved in November would offer her some relief and an alternative to pharmaceuticals she said “are like-taking poison.” But she said the state Supreme Court “pulled the rug out from under our feet.”

Prisock, 56, of rural Louisville was among a little over 200 people who rallied near the Supreme Court building and state Capitol on Tuesday morning. They were protesting the high court’s ruling that struck down the Initiative 65 medical marijuana program voters passed, and that also nullified Mississippi voters’ right to change the state constitution.

The protesters called on Gov. Tate Reeves to call the Mississippi Legislature back to Jackson in special session, and for lawmakers to reinstate the medical marijuana program and voters’ ballot initiative right to take matters in their own hands.

“If I want to put something natural in my body instead of all these chemicals, that should be my choice,” Prisock said.

Prisock said, “There is still a backward ideology in Mississippi” and the state not legalizing medical marijuana is one of many issues resulting in Mississippi being one of only three to lose population in recent years.

The rally was hastily organized by “We Are the 74,” a group that in a little over a week has garnered more than 8,500 members on its Facebook site. The 74 refers to the 74% of voters that chose Initiative 65 over an alternative placed on the November ballot by lawmakers — although opponents of the initiative note that a smaller majority voted in favor of medical marijuana overall in the two-question ballot proposal.

The rally included live music — with a band striking up a few old 60’s marijuana standards — and several speakers. It drew a diverse crowd of patients and families, cannabis advocates, entrepreneurs hoping to get into the marijuana business, and voters who feel like they’ve been rooked by the court and politicians.

Wilson Hunt of Tupelo said the rally was the first he’s attended in his 55 years. He came because, “The will of the people has been thwarted, and this is a state that has been vocal about the will of the people being thwarted on a national level.” Hunt carried a poster that said, “New math. 6>766,000?” Referring to the six high court justices that voter to overturn voters’ initiative. A friend of Hunt’s carried a sign that said, “Stop the Steal.”

Will Reed, also of Tupelo, owns an organic farm and produce company, and received the first license in Mississippi to grow hemp after it was federally legalized. He had hoped to start farming medicinal marijuana, and had made some investment in such an operation before the court ruling put a halt to the program.

“Both my wife and I had health issues. Using marijuana helped us tremendously, it’s what inspired us to open our business,” said Santita Delaney of Pearl, owner of Hemp World. Credit: Vickie D. King/Mississippi Today

Chad King, a Jackson attorney, and partners had already invested in Jackson real estate and were moving to open a cannabis business “and were ready to bring at least 90 jobs to Jackson” when the ruling halted it.

King hopes Tuesday’s rally and the ire of many voters prompts action.

“I hope it encourages the leadership to step up and do something,” King said. “Over and above medical marijuana, the Supreme Court struck down people’s voice. Taking people’s voice away with the right to pass amendments is huge.”

The Supreme Court ruling came in response to a lawsuit filed by Madison Mayor Mary Hawkins Butler. She argued the initiative process should be voided because the state constitution requires the signatures to be gathered equally from five congressional districts as they were configured in 1990. But in the early 2000s, the state lost a U.S. House seat because of population loss, rendering it impossible to gather the signatures as mandated in the Constitution.

Voters bypassed the lawmakers and approved medical marijuana after years of inaction on the issue by the Legislature despite growing grassroots support and other states legalizing it.

Jasmine Cochran, a Picayune native, was teaching school in China when she learned her father had been diagnosed with cancer, and she quickly returned home. She spoke to the crowd in Jackson on Tuesday, and lamented Mississippi being historically and continually the unhealthiest state.

“It’s just numbers until one of those numbers is your dad or your mom or your kid,” Cochran said. “… I see my dad struggling for help every day, and we could give it to him with a plant … You’d be hard pressed to find a more divided state, but we all came together (with Initiative 65) because we felt there was a better, smarter, healthier way than with endless opiates … If there is no special session, then the 74% will get together again when it’s the next time to vote and invite (politicians) to leave.”

Puckett native Austin Calhoun also spoke Tuesday. He has suffered terrible seizures and other issues for years, and his mother, Angie Calhoun was a vocal supporter and organizer of the Initiative 65 movement. Austin had moved out of state so he could be treated with medical marijuana, but was planning to return after initiative 65 passed.

He called for the governor and lawmakers to “do what is right by Mississippians.”

“Call a special session as soon as possible,” Calhoun said. “… Be the patients’ and voters’ heroes and bring back to Mississippi what was unjustly taken from us. All I want is to be able to return home to this state. Do not give up the fight for democracy to be carried out in Mississippi.”