Schools around East Mississippi saw gains on the Mississippi Accountability report card for the 2018-2019 school year.

According to the Mississippi Department of Education, the state’s A-F accountability system evaluates how well schools are performing each year.

Grades are based, in part, on how well students perform and progress from year to year on the Mississippi Academic Assessment Program tests for English language arts and math. The tests are given annually to students in grades 3-8 and in high school.

Locally, the Lauderdale County and Enterprise districts maintained their ratings while Meridian Public School District moved up a letter grade.

In Meridian, the overall rating went from an F to a D, and for first time since 2016,  the district did not have any failing schools.

Poplar Springs was a B, Magnolia Middle School and Parkview Elementary School received C scores and the rest of the schools received D scores.

“The most important piece of this is that no child attends a failing school in Meridian,” said Amy Carter, the district's superintendent.

Carter said that, while the district is not pleased with the letter grade, there was a a 90 percent gain in math at all the schools and about an 80 percent gain in English and language arts.

Carter said some things the district put in place last year were teacher collaborations, working with the Boys and Girls Club of East Mississippi, after school programs and Saturday school.

LaVonda Germany, elementary curriculum director, said academic coaches were  added at the elementary and middle schools. Plans are underway to add an academic coach at the high school, she said.

Melody Craft, director of curriculum and instruction for secondary education, said teachers are moving away from seeing students as test scores only, and instead focusing on the whole child. She said the district also been working on hiring quality teachers, making learning fun for students and focusing on career goals.

Parkview Elementary School saw a significant increase from an F to a C, which Carter attributed to principal Angela McQuarley, who was also principal of Magnolia Middle School during the 2018-2019 school year.

“It's unbelievable how I was running two schools and moved one from and an F status to a C status," McQuarley said. "We believed in children, when no one else believed in them,”she said.

At Parkview, McQuarley said she focused on data-driven learning, working with students individually, meeting with parents to go over student data and making sure teachers were on the same page.

“Even though we are celebrating the success, we still have room to grow,” McQuarley said.

Tracy Henshaw-Jackson, the new principal at Parkview, said she plans to build on the foundation McQuarley started to move the school to a B rating.

Carter hopes the scores continue to improve, but noted those improvements take time.

“We are headed in the right direction in moving from a failing status to the next accountability label,” Carter said.

The Lauderdale County School District kept its B rating from last year.

Superintendent John-Mark Cain said one thing the district is proud of is that 95 percent of third graders passed the reading test.

The district also saw improvements in reading and math. 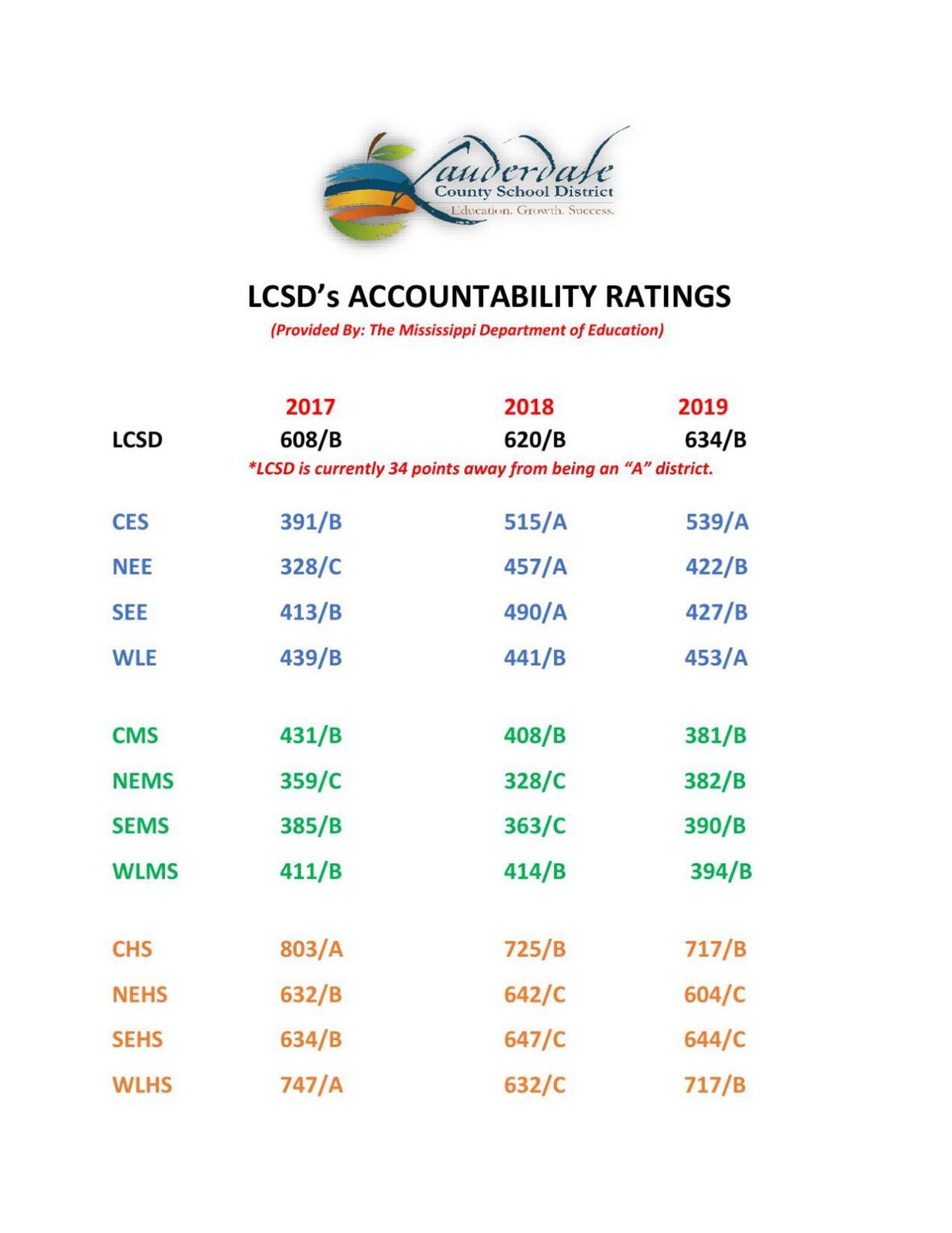 “We are excited about the results we have this year and it proves that our teachers and administrators are continuing working hard and trying to grow our students all over the county," Cain said.

Ken Hardy, director of curriculum, assessment and accountability, said the district was 34 points away from getting an A grade.

“Even though we maintained, we showed some growth,” Hardy said.

Clarkdale Elementary maintained its A status from last year.

Hardy said the district will continue to focus on student-driven data and helping students who are struggling earlier.

“We are proud of what we are, but we are not satisfed," Hardy said. "We will keep moving until we are an A district.”

The Enterprise School District maintained its A status for the third year in a row. Superintendent Josh Perkins said the grade shows how the community, parents, and school staff work together.

The elementary and high school were both A schools, while the middle school was a B. The elementary was also ranked the top elementary school in the state, the same ranking it received last year.

Perkins said the key to high scores is good teachers who focus on more than just data.