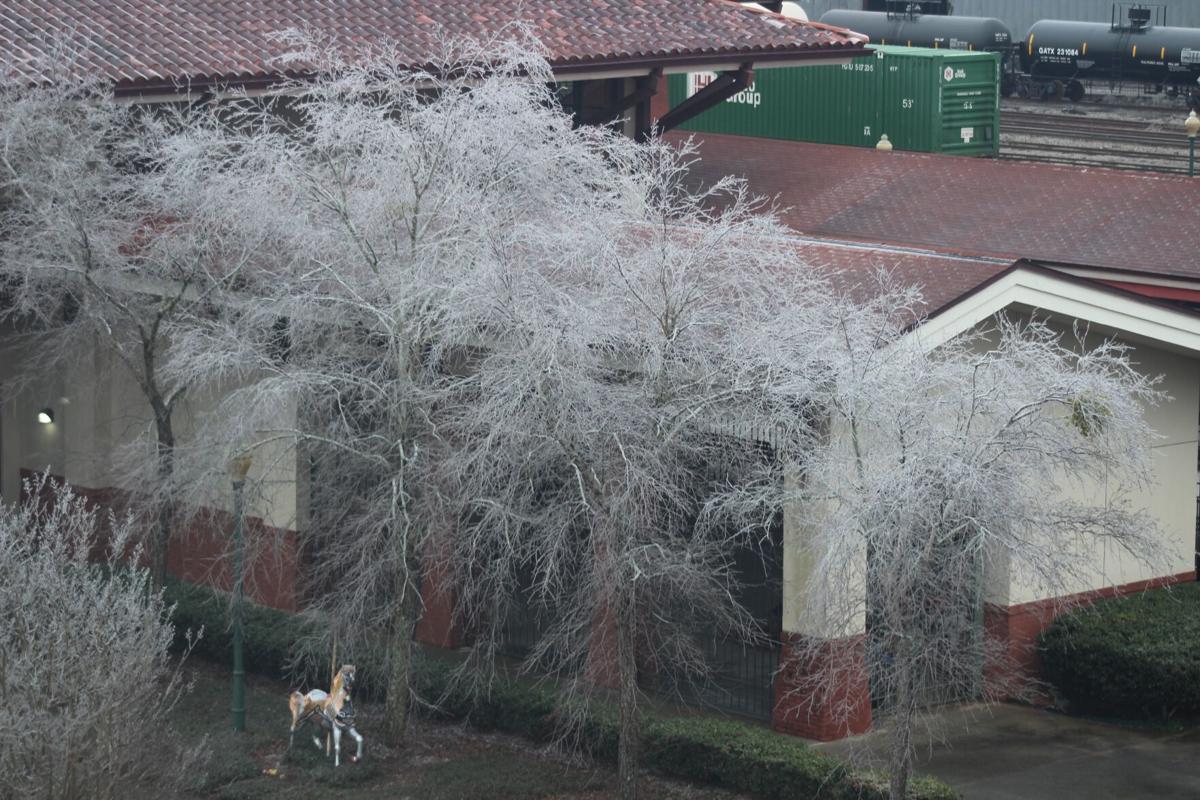 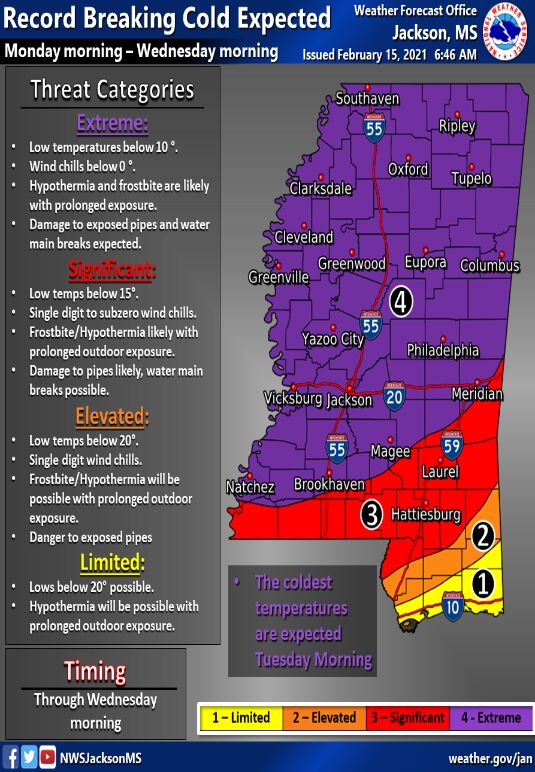 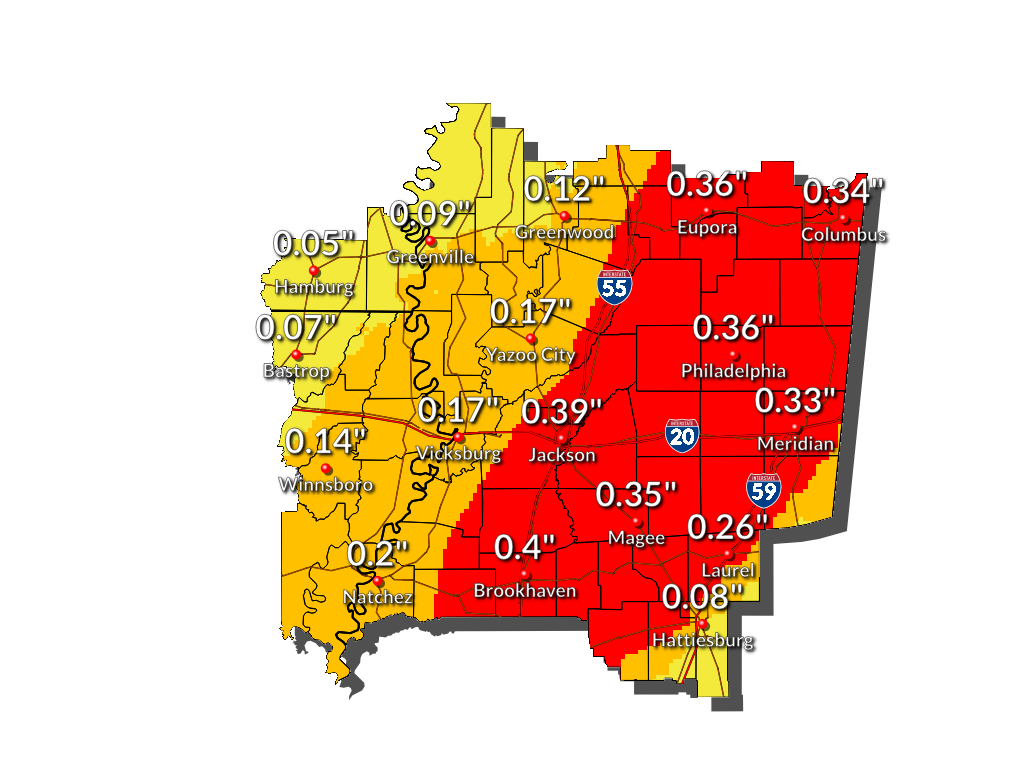 Logan Poole, a meteorologist at the National Weather Service office in Jackson, said that a majority of the precipitation associated with the current storm was moving out of the area Monday afternoon.

However, he said that temperatures in Meridian could drop to 13 or 14 degrees overnight.

“Tonight is going to be bitterly cold- probably some of the coldest air that we’ve had in the state in a very long time,” he said, adding that it could be record-breaking cold.

Poole said that there will not likely be precipitation in Meridian on Tuesday. The high temperature will be about 31 degrees on Tuesday.

Poole recommended that people in Meridian stay off the roads and don’t travel if they can avoid it.

He also recommended that local residents keep their faucets running at the lowest possible setting overnight. This will decrease the odds that your pipes burst. He said that if your faucet stops trickling suddenly, turn the water off as close as you can to your meter. Your pipes may have frozen.

The City of Meridian said Monday morning that the city will be under a curfew from 5 p.m. on Monday to 8 a.m. on Tuesday.

“Due to hazardous weather conditions and dangerous road ways, the City respectfully asks for all residents to limit travel to essential personnel only,” a city press release stated.

City offices and departments will be closed on Tuesday, except for essential personnel. The City Council meeting on Tuesday has been rescheduled to Thursday at 5 p.m.

According to the press release, city officials will continue to monitor the weather conditions and will provide additional updates as they become available.

“Residents are encouraged to use extreme caution during this time,” the press release said.

The Mississippi Department of Transportation is urging drivers to stay off roads because of icy conditions across the state.

“MDOT crews have been treating with salt, brine and slag, but the effectiveness of those measures decreases exponentially as the temperatures approach the single digits,” the department said in a press release.

The latest road conditions are available at mdottraffic.com.

Lauderdale County administrator Chris Lafferty said late Monday afternoon that the county's board of supervisors still plans to hold a meeting at 9 a.m. on Tuesday, but the public hearing scheduled for 9:15 a.m. is postponed.

The Mississippi State Department of Health said that its offices in Lauderdale County, Neshoba County, Clarke County, Newton County, Kemper County and in many other counties in the state will be closed on Tuesday.

All appointments at MSDH’s drive-thru testing and vaccination sites are canceled on Tuesday, except for those in Harrison County. MSDH said the appointments will be rescheduled for the same time on a different day, and individuals will be notified by phone, email or text.

Classes at Meridian Community College will be taught online Tuesday. Students should monitor Canvas accounts for more information. The MCC campus will be closed and employees should work from home if possible. The campus will reopen and classes will resume on Wednesday.

The East Central Community College campus will be closed Tuesday. The campus will reopen and classes will resume on Wednesday.

All campuses of East Mississippi Community College will be closed Tuesday. Classes will be conducted virtually.

All campuses of Mississippi State University, including the Meridian campus, will not hold in-person classes and activities on Tuesday. Classes should be conducted remotely where possible, according to a press release. A decision about Wednesday's classes will be made on Tuesday.

The following school districts will be closed on Tuesday and not holding classes:

The following districts will be conducting virtual learning on Tuesday:

Due to the hazardous conditions and icy roads, Mississippi Power linemen will be off the roads at 10 p.m. Monday night and resume restoration at first morning light Tuesday. Customers are to be aware that the severe impact of the winter storm on the service area could result in extended outage time.

Contractors and additional resources have been brought in from Georgia Power and Alabama Power to restore power as quickly and safely as possible in the icy weather.

The company’s Bill Payment Office in Meridian will be closed on Tuesday. Mississippi Power expects customers in the following areas to have their service restored by:

EMEPA reported the following number of  outages at 8:30 p.m. Monday:

Delivery of The Meridian Star will be delayed Tuesday because of icy road conditions.

Services for Susan Elaine Kilgore, 53, will be Saturday, March 6, 2021, at Bonita Lakes first pavilion, at noon. Susan was a loving mother, grandmother, and great friend to the people she met.