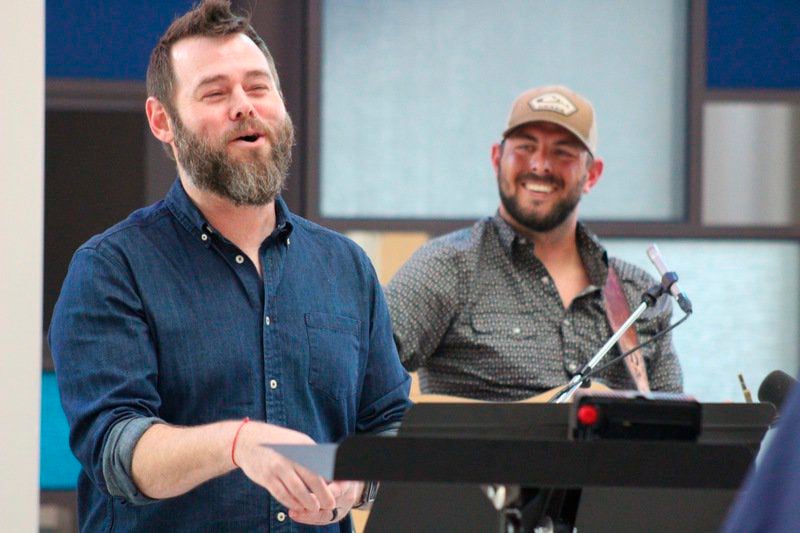 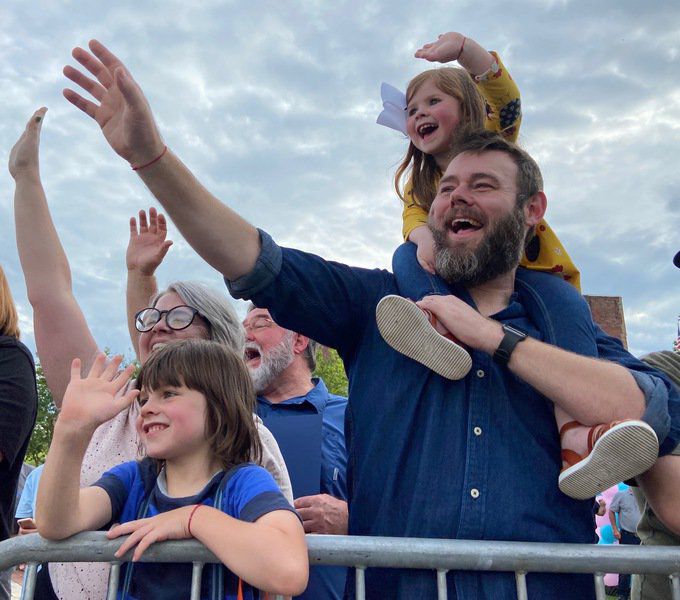 Todd Tilghman and his daughter Winnie wave during a parade in his honor at Dumont Plaza in Meridian on Thursday. Tilghman won the singing competition “The Voice” last week. At his left are his son Louie, wife Brooke and father Clarence. 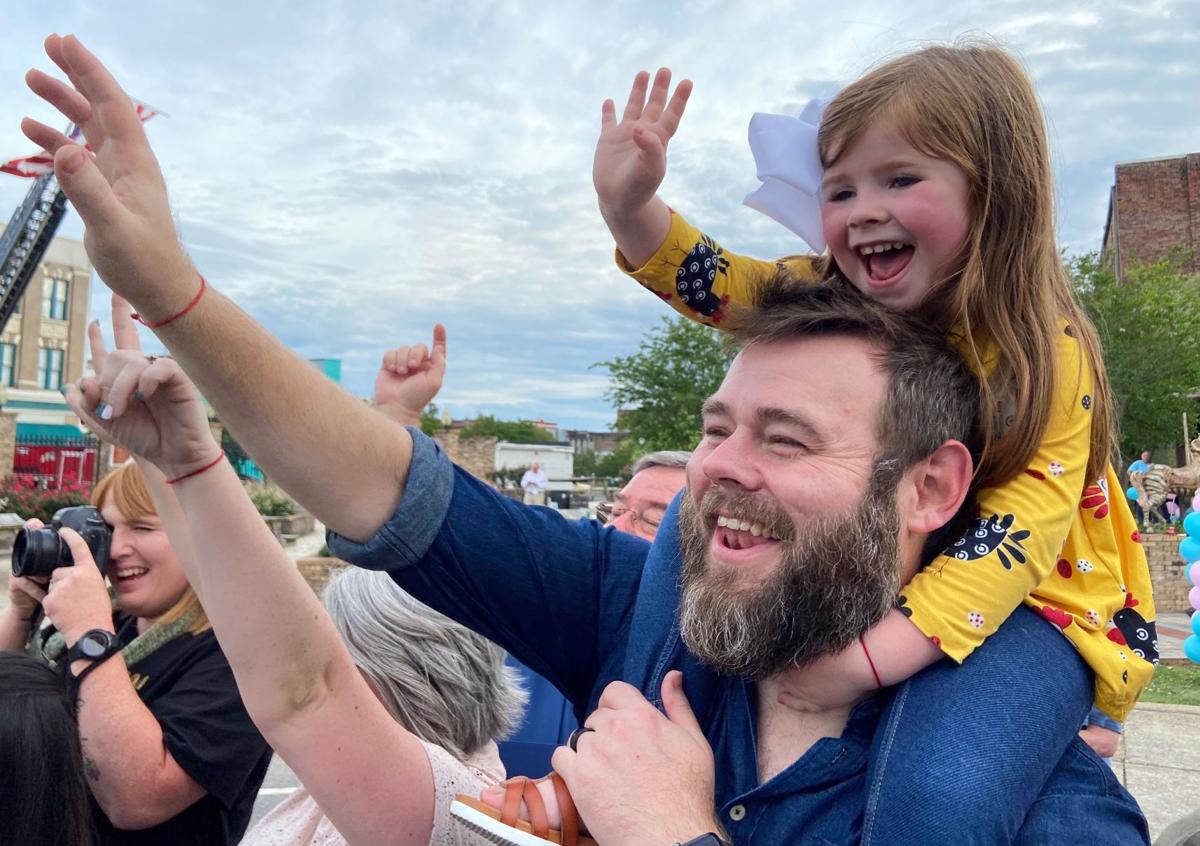 Todd Tilghman and his daughter Winnie wave during a parade in his honor at Dumont Plaza in Meridian on Thursday. Tilghman won the singing competition “The Voice” last week.

At the Mississippi Arts + Entertainment Experience, placed in the middle of its 360-degree Hall of Fame exhibit and surrounded by lit-up portraits of the Magnolia State’s legendary musicians such as Jimmie Rodgers and Elvis Presley, Meridian's Todd Tilghman belted out lyrics with the same enthusiasm and spirit that earned him the “The Voice” title last week.

On Thursday, nine days after the 42-year-old Tilghman became the oldest contestant to win the NBC singing competition, he returned to the stage, performing a livestream concert broadcast over Facebook. Later in the evening, he was honored with a ceremonial key to the city in Dumont Plaza, and was treated to a parade of several dozen vehicles driving by with signs of congratulations, honks of celebration and passengers' shouts of praise.

Addressing the crowd at Dumont Plaza, Tilghman spoke of the incredible reception he’s received from Meridian, his hometown, since winning the 18th season of “The Voice,” and his undying love for The Queen City.

Once a little-known pastor of Meridian's Cornerstone Church with vocal pipes, now he's a nationally-recognized musician.

“A lot more people care who I am, which is so weird to me,” Tilghman said, chuckling. “Especially since the win, there are so many opportunities coming up.”

Amid countless interviews he’s done, Tilghman is looking into the next phase of his music career. Explaining that he knows nothing about the industry, and now being thrust into it, he said he’s relying on the connections he made while on “The Voice” to help him along. He’ll be traveling to Nashville next week for meetings on how to move forward, which include choosing a manager.

While he couldn’t speak on a possible tour, which is already in very preliminary stages and largely unknown due to the COVID-19 pandemic, he said live venue opportunities may be opening up, which he’ll appreciate more having been performing from remote locations recently.

Tilghman said contestants sign with a record label before auditioning for “The Voice,” giving the record label the chance to advance with any person. He’s staying in constant contact with the label, discussing album possibilities and what genre he’ll choose as he performed several different ones during the show. He also said a collaboration with Blake Shelton, his coach on the show, might also be in the future.

It’s a lot to absorb and consider, Tilghman said, as he weighs his options.

“I want to strike while the iron’s hot, but I also want to take time and make the right decisions, so I’m trying to just balance those two very different things,” he said. “I really do think that this whole process has sort of restored a spirit of joy that I was kind of missing.”

As Tilghman sang at The MAX before the celebration, his wife, Brooke Tilghman, and their daughter Winnie, one of their eight children, sat a few feet away, singing along and swaying with the beat of the music. Since she’s heard her husband’s voice for years, the two having been married the last 21, Brooke Tilghman said she’s delighted it’s now available to the world.

Brooke Tilghman said she’s been overwhelmed with the hometown support, but in the best way possible, and didn’t expect the attention they’ve received. She grapples with all of Tilghman’s future opportunities by confiding in their Christian faith, something they’re both rooted in.

Despite the plethora of appearances, interviews and upcoming endeavors to consider, Tilghman said he feels very much the same as he did before he auditioned on “The Voice” and rose to fame. He still has many of the responsibilities of a typical family man.

“When I go home, the dog is still trying to chew up toilet paper rolls,” he said. “The kids still fuss and fight with each other, and we still have to make sure supper’s on the table.”

From the pulpit to the stage, Meridian pastor Todd Tilghman never dreamed he would be crown…

OUR VIEW: Todd Tilghman a worthy and needed champion for Meridian

The name of the television show is “The Voice,” and the winner is supposed to be chosen on …

What some people close to "The Voice" champion Todd Tilghman are saying:

Meridian pastor Todd Tilghman, 2020 winner of “The Voice,” will be performing in a residency at The Theatre Of The Stars in Pigeon Forge, Tennessee.

Todd Tilghman concert set for Nov. 5 at the Temple Theatre in Meridian

The concert everyone's been waiting for is coming soon to the Temple Theatre in Meridian.

Graveside services will be Friday, Dec. 4, 2020, at 1 p.m., at Pentecostal Memorial Cemetery with Berry and Gardner in charge. Mrs. Jones, 94, of Marion, died Tuesday, Dec. 1, at Bedford Care Center of Marion.