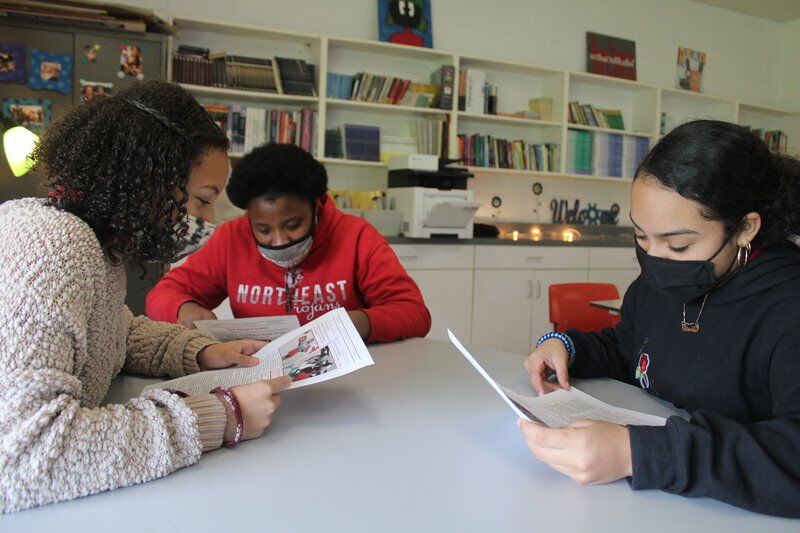 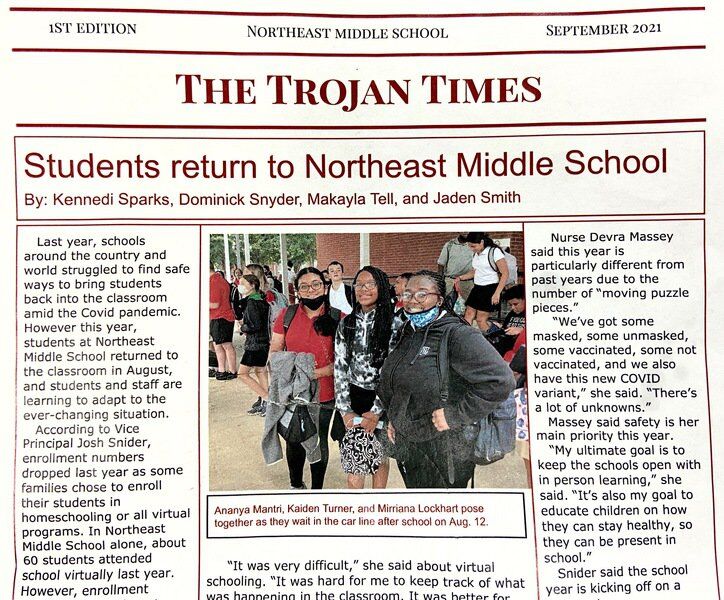 The Trojan Times is a new student newspaper at Northeast Lauderdale Middle.

Writing, taking photos and conducting interviews are some skills students are learning at a local middle school.

“At first, I was skeptical because I didn’t know anything about it, but when I started to get into it, I enjoy writing...and I like it,” said eighth-grader Makayla Kendricks, a student on the staff at The Trojan Times, a newspaper at Northeast Lauderdale Middle.

Since the start of school, seventh and eighth graders have spent fifth period creating the monthly newspaper. The papers cost 25 cents and are sold at the school.

Northeast Middle English teacher Kathryn Mabry, who used to be a journalist, said the idea to start the newspaper came from principal Deborah Porter.

Students have learned about makes a story newsworthy and timely, as well as photography skills, Mabry said.

"I think originally when they first started they were nervous to go out, but I think the more they did it, the more comfortable they got,” she said.

Working in groups of four, students are assigned duties such as interviewing, taking photos, transcribing interviews and writing. Once all the information is collected, Mabry and her students use Canvas to create the newspaper.

"This is middle school, so they are still really young, but it's getting them to think about writing more, even before they go to high school," she said. "I think it's good to start young."

While out reporting, Kendricks said she was nervous at first, but likes how writing for a newspaper has improved her writing. Kendricks said while most of her classmates were nervous about interviewing students, she was excited.

“I enjoy that part," she said. "It's kind of hard because a lot of people don’t like talking…, I enjoy trying to get people to talk and I enjoy hearing people talk on the spot...I really enjoy the interview part.”

After being in local newspapers in the past, eighth-grader Lexi Dancy said she was excited to write stories about other people.

“I was really excited because I've been in newspapers many times and I just wanted to write stories about everyone else,” Dancy said.

Dancy said her favorite story to report was a feature about O’Marion Hutson.

“He's the only boy that has cheered here after all these years,” she said.

Seventh-grader Rayleen Love said she got involved in the school newspaper after hearing about how there was going to be a newspaper club.

“I like interviewing people, "Love said. "And it's cool to see your name in a newspaper.”

Love added that creating the newspaper has helped her come out of her shell.

“It also helps you communicate with others,” she said. “If you are shy, it helps you with that, because I was really shy and now I am wanting to ask questions.”

The three students said they are ready for the next issue.

“I enjoy the newspaper and I can’t wait to do more stories and get better at writing and talking to more people,” Kendricks said. “I hope that I can grow.”