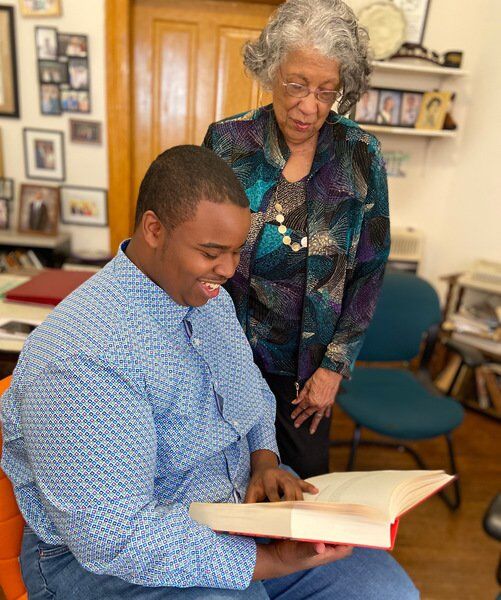 Andrew Washington and his grandmother, Melba Clark-Payne, flip through a book of her life he created as a Christmas present to her. "Sincerely Melba: A Collection of Poems, Plays, and Prose" includes the retired educator's writings and other materials. 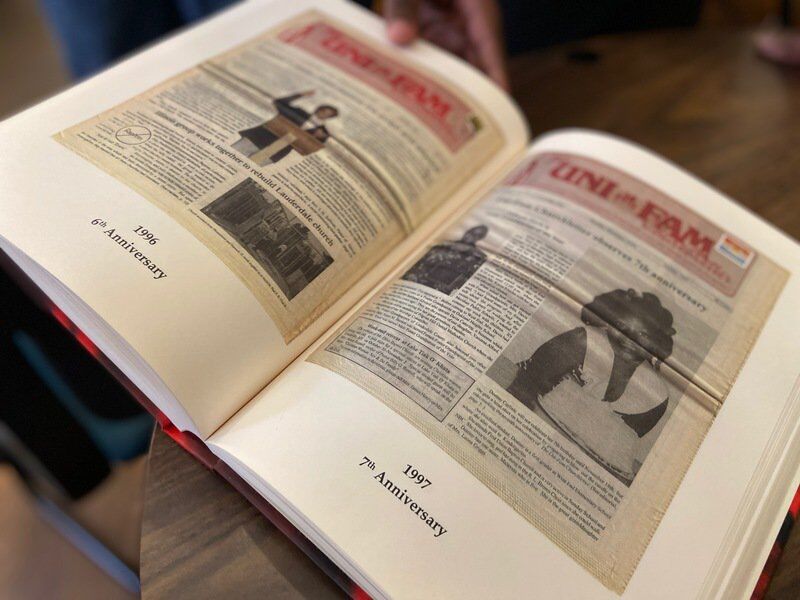 "Sincerely Melba: A Collection of Poems, Plays, and Prose" includes the retired educator's writings and other materials. 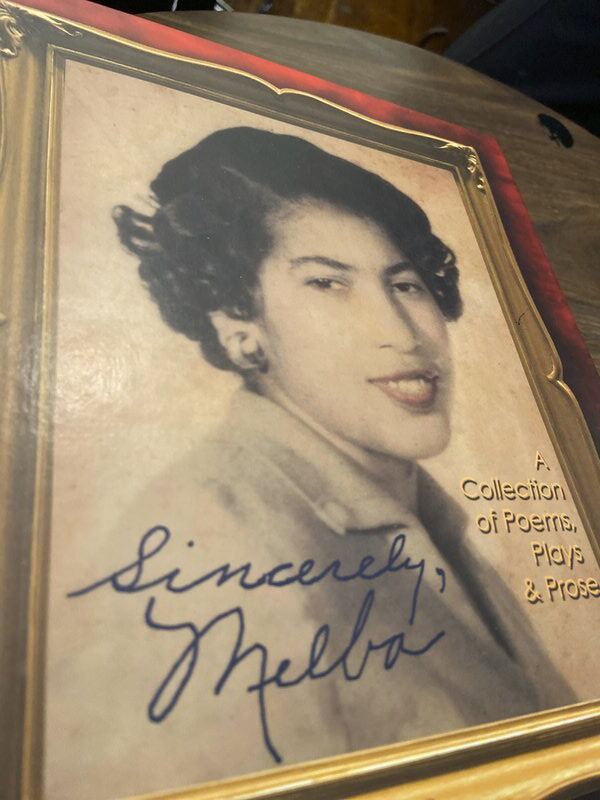 The cover of "Sincerely Melba: A Collection of Poems, Plays, and Prose." 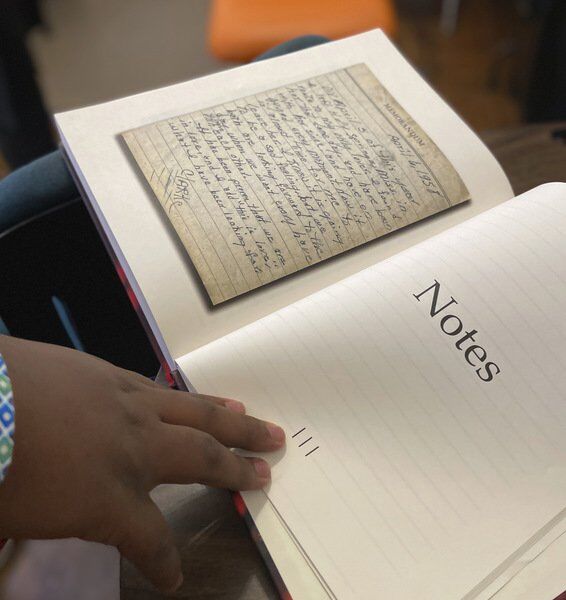 "Sincerely Melba: A Collection of Poems, Plays, and Prose" includes the retired educator's writings and other materials.

Melba J. Baird Clark-Payne received the biggest surprise of her 83 years in December.

Her 17-year-old grandson Andrew Washington compiled all of her writing, poems, plays, prose, and photographs, then edited and published them in a large volume for his grandmother’s Christmas present.

"Sincerely Melba: A Collection of Poems, Plays, and Prose" was the result.

Unbeknownst to Clark-Payne, her grandson and her daughter, Tracey, had searched high and low, collecting these pieces of writing. The two worked together, contacting some of Clark-Payne’s close friends, colleagues, and former students to add commentary to the collection as well.

Mable Hoskins Oatis, a former co-worker and friend of more than 40 years, writes, “Her family is compiling this anthology of some of her notable musings as a tribute to her genius and the resilience of the human spirit. Simply Melba will inspire with vivid and poignant portrayals that cover a lifetime.”

Tracey Washington and her husband Korey live in Atlanta and are parents to Charles, 23, and Jason, 18, and Andrew. She said she was excited about her son’s top-secret project, and was more than happy to assist in retrieving some of the documents.

“We collected these items, and we kept finding more and more of her writings,” Washington explained. “We even found the diary she kept when she was dating my father [Obie Clark].”

Her love of writing was nurtured early on by her parents, Ruby and Robert.

She wrote poems in her younger years, and after graduate school, wrote three full-length plays: The Decision (1972, presented at Meridian Community College during Black History Week), Mine Own Worst Enemy (1974), and a comedy, Rolling Against Time (1982, performed by the Mahogany Performing Arts Association, a community theatre she founded in 1978.

Treasure Shields Redmond, a noted poet and educator, was one of Clark-Payne’s actors with the Mahogany Performing Arts Association.

“I will always remember how she provided a platform for us,” Redmond recalled. “To have artistic expression and community. She’s a real treasure and a gifted artist who set the standard for play production in our region.”

“The Silk-Stocking Invitation,” a short story and other works, was published in 1994, and Clark-Payne continued to write poems, eulogies, and various skits for church and community productions. She also developed serials in the Uni-Fam Churchletter, a subscription-based newspaper for local Black churches, which she continues to edit and publish.

In writing those serials, Clark-Payne says, “That’s how I kept readers interested and coming back for more. I always had a plot twist in there at the end that made them eager to read the next installment.”

“I enjoy keeping busy, and I’m just grateful that my ‘favorite’ grandson honored me with this publication,” she said. “I remember him as a young child when he would say, ‘Read to me, Grandma!’ Before I knew it, he would pick up the book and start reading to me.”

A senior at Marist School in Atlanta, Andrew Washington recalls spending many summers with his grandmother in Meridian.

One of his favorite memories was attending Meridian Community College’s College for Kids. When his grandmother would pick him up from the morning’s activities, they would go to eat Chinese food.

When the pandemic started last year, Washington wanted to be productive with his time.

He remembered the box of his grandmother's writings his mother found when the family was in the process of moving, and was struck by the idea of creating this collection.

“Over the last couple of months when I was editing this anthology, I thought many times about our relationship,” Washington writes in the book’s forward. “Before starting this venture, I never really thought of my grandmother as a writer. I knew how much of a stickler she was about grammar. I knew she was an avid reader. With every new find and subsequent inclusion or entry, I was amazed at how she is able to share such vivid, universal, and complete stories.”

In addition to her writing and editing the Uni-Fam Churchletter, and her duties as co-owner of Cedric D. Clark Memorial Funeral Home, Clark-Payne still reads, plays Scrabble, and watches reruns of the Golden Girls and the occasional episode of Forensic Files.

She and her husband of five years, Billy Payne, reside in Meridian.