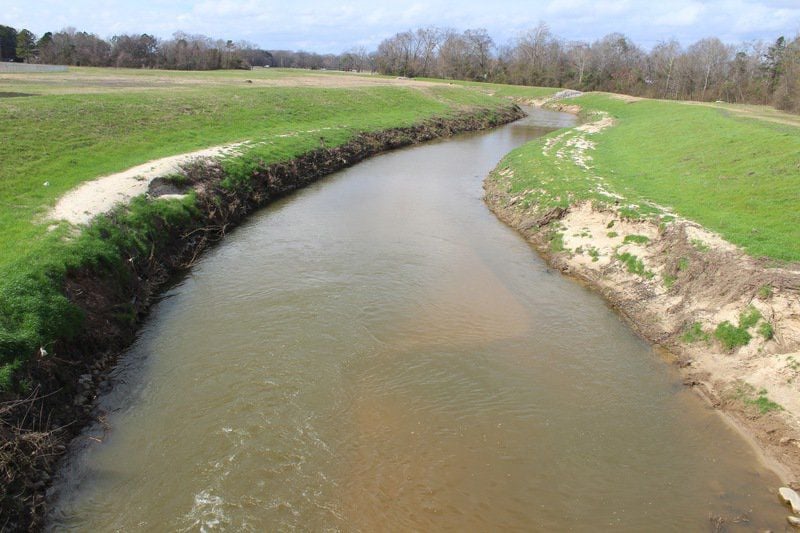 The Lauderdale County Board of Supervisors continues to push for a walking trail around the Sowashee Creek, seen here from the Grand Avenue bridge. 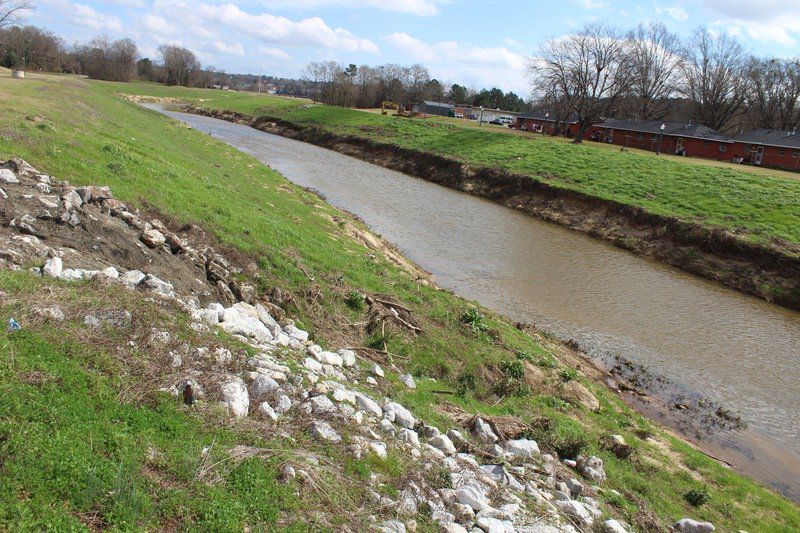 The Sowashee Creek walking trail's first phase will be a closed loop between 29th Avenue and Grand Avenue, with parking available for the trail as well as Multi-County Agency and Mt. Barton (both in the background) on the far bank. 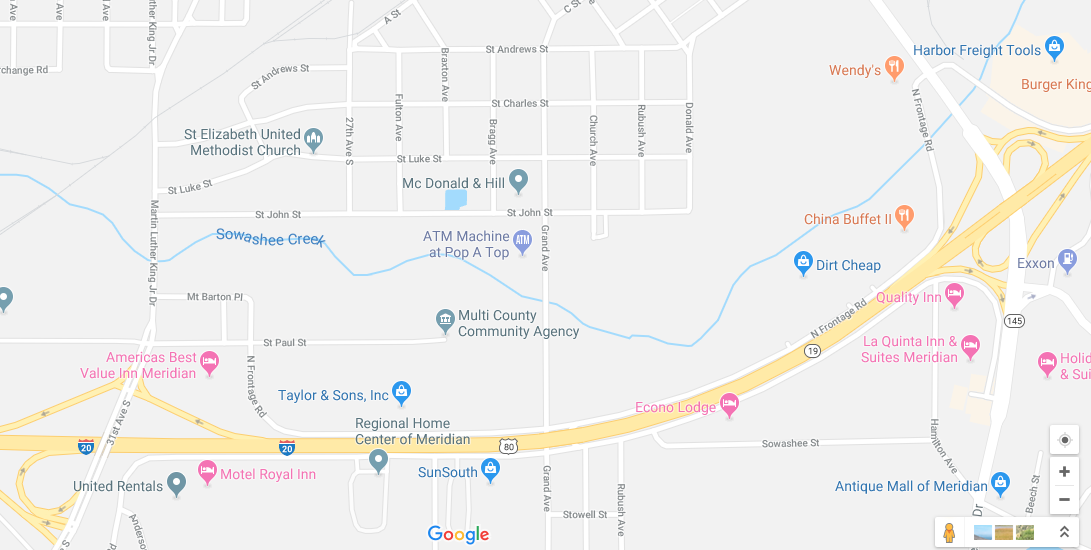 The first phase of the Sowashee Creek trail will be a closed loop between 29th Avenue (Martin Luther King Jr. Drive) and Grand Avenue, running behind the Multi-County Community Agency. The second phase will connect the loop to 22nd Avenue, seen at the far right.

Lauderdale County Supervisors have discussed adding a trail around Sowashee Creek for more than a decade and secured funding nearly five years ago, but turnover and administering the grant money have slowed progress to nearly a standstill as the county waits to hear from the state.

"We've been talking about it for 12 years," Joe Norwood, the supervisor for District 4, said. "And this is something that has been on the table for nearly 30 years."

Norwood has pushed for the project near the Multi-County Community Service Agency for years and detailed some of the delays to the walking trail between 29th Avenue and Grand Avenue.

The county didn't receive the MAP 21 grant, or Moving Ahead for Progress in the 21st Century, in 2013 but re-applied in 2014, receiving $500,000 from the Mississippi Department of Transportation.

Do you like the idea of a recreation trail along Sowashee Creek?

Kawana McCary, part of the East Central Planning and Development District, told the board in 2014 that the grant would cover 80 percent of costs for the "transportation alternative trail."

Rush Mayatt, the county road manager, said that the county hadn't received the $500,000 yet, but it would apply for reimbursement of costs related to the walking trail.

"We will have to be reimbursed, just like with every other project," Mayatt said. "When the county spends the money and the project is finished, MDOT will send their engineer, make sure everything meets the design specs and then we can apply for reimbursement."

Norwood said that an initial plan included a parking lot on the west side of the Sowashee, across the creek from Multi-County and the Mt. Barton area.

"We needed it on the east side to service Mt. Barton and Multi-County," Norwood said. "And we had to redo the paperwork."

While amending the plan, the project engineer for the project from Engineering Plus, the county engineer, left the company.

Mayatt repeated that these staffing changes slowed the process and forms had to be resubmitted.

"The project's been out there forever," Mayatt said. "Long before I got here."

Before Mayatt, the grant administration had been slowed in late 2014 when both a county administrator and county road manager retired, according to an October, 2014 report in The Meridian Star.

"It's a long process and it takes time for you to get this funding," Mayatt said. "There's a million hoops you have to jump through. It's a lot of work just to be eligible to receive it."

The project will have two phases: the first creating a closed walking loop between 29th Avenue and Grand Avenue and another extending the path to 22nd Avenue.

"When it's constructed it'll be worth it but right now it's a lot of red tape," Mayatt said. "It's going to improve the quality of life on that side of town."

Bernice Wilcox and Dennis Hargrove walked Thursday at Bonita Lakes, which has a popular trail. They seemed excited about the possibility of another option for walkers in the county.

"That would be good for the community," said Wilcox, an Alabama nurse who works in Lauderdale County. "Anytime you can do it; it's worth it. But it's got to something safe and lighted."

Hargrove, from Texas, said that he enjoyed similar trails in his state.

"It's the taxpayers money and you should give them something for it," Hargrove said. "Health and fitness need to be promoted."

Hargrove even wondered what amenities the trail might have, such as picnic tables or exercise equipment like those at Bonita Lakes. He named other opportunities for walking trails: abandoned railroad tracks.

"In Texas, we also have these tracks to trails," Hargrove said. "From what I understand, it's a fairly inexpensive thing. It's just pulling up the tracks and putting down asphalt. If the railroad's not going to be opened up again, why not use it?"

Norwood has a vision for the trail, something he said everyone in the county should take advantage of whether or not they live in the city limits.

"It's for everyone in the county of Lauderdale to explore," Norwood said. "It's a perfect opportunity for an entrepreneur – like they have in other cities – to put in a bike (rental) system."

Though the trail will be in city limits, the City of Meridian will only have to approve the county's plan, according to Public Works Director Hugh Grant.

"They've taken the same concept we have here and turned it into a major community hub with hotels and restaurants opening right up to the River Walk," Norwood said.

Mayatt couldn't estimate a construction timeline, but said that it would take another month or so to go out for bids and finalize details after receiving MDOT approval.

"It is now in the hands of the state and we are waiting to hear from them to tell us how to proceed," Norwood said. "But it is actually going forward. We wish we would have had it built a year ago but things pop up."