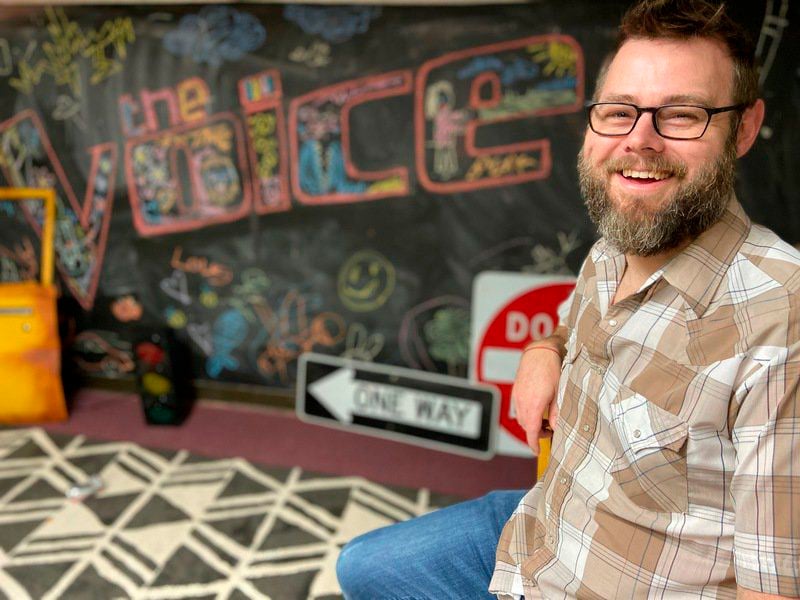 Pastor Todd Tilghman poses in the children’s room of the Cornerstone Church in Meridian, where portions of the television show “The Voice” were filmed. Tilghman was crowned the winner of this season's show on Tuesday night. 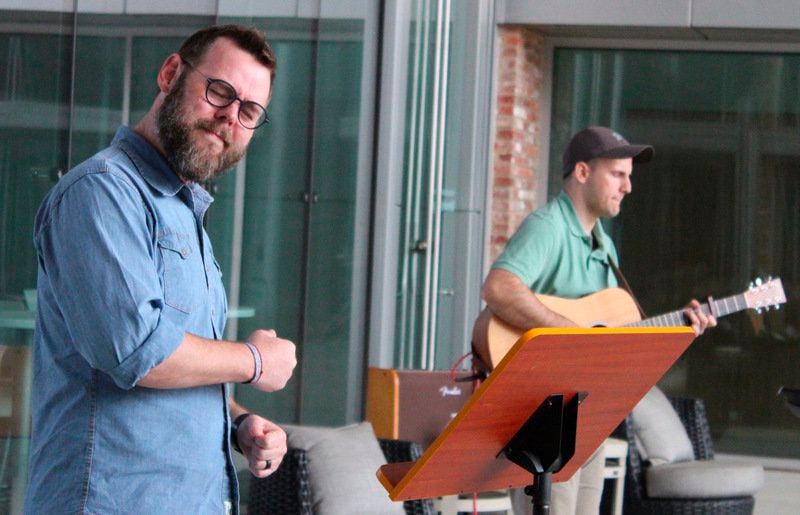 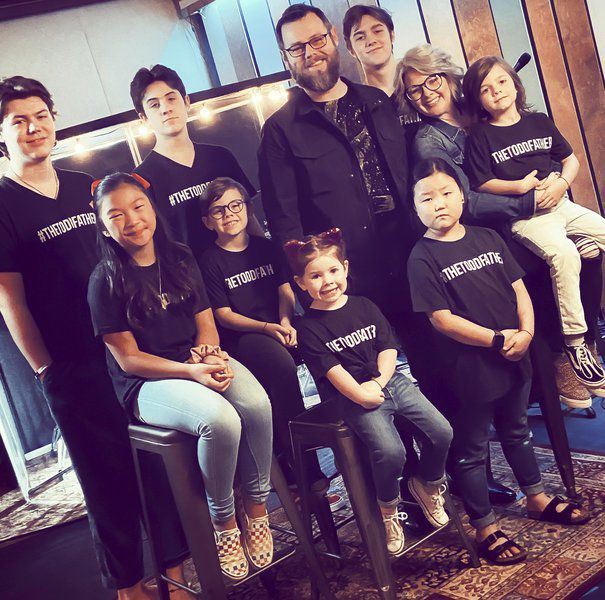 From the pulpit to the stage, Meridian pastor Todd Tilghman never dreamed he would be crowned the champion of a national singing competition – NBC’s “The Voice.”

What started out as a quest to find what God’s plans were for the next phase of his life, the 42-year-old listened to that still small voice inside and took a leap of faith on a journey that would drastically change the course of his life.

“A couple of years ago I confided in a couple of people that something inside me was telling me I needed to break out of myself and do something different,” said Tilghman, a father of eight. “I looked into all kind of things, literally contacting some realtor friends about going into real estate. Even though it was a shot in the dark – that is why I auditioned for "The Voice" at all.”

When he heard his name called out as the winner Tuesday night as he gathered with his family at his Cornerstone church on Highway 39N, Tilghman said right at that moment everything was a blur.

Tilghman said he never thought he would win.

“I was praying I would turn one chair in the audition, never expecting a four-chair turn,” Tilghman said. "I would say, once I made a team in the blind audition, I did make it a goal to make the live shows. If anything else happened it was just a bonus, and now here we are we have won the whole thing.”

Tilghman’s coach, country singing star Blake Shelton, made the comment what put Tilghman over the top was his relatability.

“I really don’t know myself what it was, but I think it was all of you,” Tilghman said. “All the singers are really great, so I don’t think it was necessarily fully my vocal abilities. Toneisha opens her voice and it fills the entire room.

“One thing I will say when you get to be 40 something and you are on "The Voice" you have sort of outgrown trying to pretend. I am just who I am. I don’t know how much of that came through on the show, but for me the gospel is a relatable thing – shared in a relationship instead of just telling people.”

OUR VIEW: Todd Tilghman a worthy and needed champion for Meridian

The name of the television show is “The Voice,” and the winner is supposed to be chosen on …

Tilghman said he wants everyone to know he is a believer and a man of faith, but doesn’t want to be a poster boy for Christianity.

"I think we all have flaws and struggles and that’s why we need Jesus,” Tilghman said. “I feel like you get to a point sometimes if you turn it into this really strictly religious thing the world can be divided behind that, and I don’t think that’s what Christianity and our faith is supposed to be about. It’s supposed to be about love and unity, and hopefully we can do our very best to do our part to make that happen.”

“All four of the coaches were really genuine, but when you are really genuine what that means is you’re all very different in your own way,” Tilghman said. “We didn’t spend tons of time together, but the time we were together he was just like he was on camera.

“I can say one thing I learned about Blake Shelton is he is cream of the crop good guy, I love him. That's why I chose him for my coach because we relate. I was hoping it would work like I thought it was going to and it did.”

Tilghman said when he met legendary singer/songwriter James Taylor he was star struck, describing him as kind, with a humble spirit, soft-spoken and complimentary of the contestants.

“I don’t know if I am an old soul or what but I have listened to James Taylor my whole life,” Tilghman said. “That was like a dream. I don’t think it could have gone better if I had scripted it. When I got back home I downloaded all of his music and put it on shuffle in the car for a week or so.”

Tilghman said he’s not quite sure what genre of music he'll pursue.

“I have some direction I am looking at and Blake helped me a lot to sort of find a lane to get in,” Tilghman said. “I don’t really know if it fits snuggly into any category. I do love country music, I just never felt I had a voice that would fit that kind of music, but he kind of taught me that I do.”

Tilghman described his taste in music as eclectic.

“I am just all over the place.”

Tilghman hopes his music will draw attention to his life.

“I want my life to be a witness and when I say that, every part of it,” Tilghman said. “I want to love you regardless and I want to love you unconditionally, regardless. But then I also want to show you this is what having faith in Jesus is. Sometimes you fall and fail, and make bad decisions. Sometimes you live a certain way or do certain things that other people disagree with, or maybe I disagree with, but you still just love one another.

“When the songwriters on the show first asked me about an original song they asked me if I had any songs that I wanted my original song to be like. I told them I want my song to make people feel what I feel when I listen to “Frail” by Jars of Clay or “Rise Up” by Andra Day. Those songs move you and give you hope. That is what I want my music to do and hopefully it will."

Tilghman said the process of being on "The Voice" has brought his family closer.

“I feel like I am closer with my brother and sister, and I have become closer with my in-laws through all this,” Tilghman said. “It has been a huge undertaking that we did together.

“My oldest son, Eagan, is actually gifted musically as well. He recorded himself singing that old song “I’d Like to Visit the Moon” and did a little video on Instagram. At the very end of the video there was some footage when they announced the winner. It was just so moving. I layed in my bed, watched it and wept.”

The love and support he has received through all this from everyone has been phenomenal Tilghman said – something he is very appreciative of. The watch party at the Temple Theatre the night he won topped it off, he said.

“I’m not going to lie, I have watched that 20 times and I cry every-time,” Tilghman said. “When I see the way the people were following those guidelines they have to follow because of the pandemic, and they still came out. When they announced my name the way that room erupted, it breaks my heart every-time in a good way.”

Tilghman also gives credit to his family for their support, especially his wife, Brooke.

“She has proven to be invaluable in all of this," he said. “She’s the one who surfed the internet trying to figure out the statistics on who might could win. I will say she is probably the number one person that would have said, 'Todd if you follow the statistics you might win this.'

“I tell people all the time if you think you like me just meet my wife and kids you will love them.”

Tilghman said moving forward he knows his life is about to change.

What some people close to "The Voice" champion Todd Tilghman are saying:

“Honestly because we don’t know any of the specifics yet I haven’t started that part of the plan," Tilghman said. “Right now what I am doing is taking the first steps in the music world. I don’t know what is going to happen.

“Here at the church when I am here I am grateful to be here, and when I’m not here I have people I can rely on. I’ve been really clear about this from the beginning – it’s all in God’s hands and whatever His plans are for me I am willing to pursue it and go where it takes me.”

Meridian's Todd Tilghman advances to finals on 'The Voice'

Meridian pastor Todd Tilghman wins Knockout Round on 'The Voice'

Not one, not two, not three, but four chairs turned for Meridian’s own Todd Tilghman in sea…

Todd Tilghman, the pastor who won the national singing competition “The Voice” last week, will be honored with a drive thru parade in downtow…