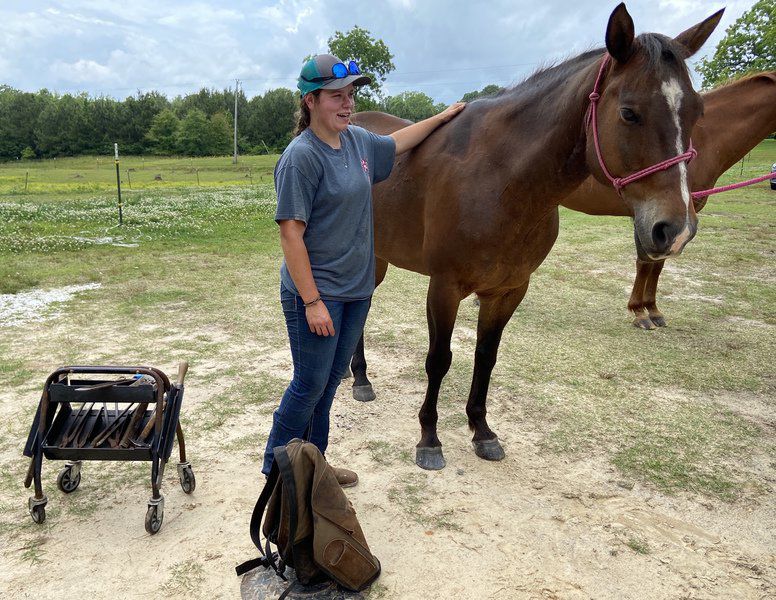 Savanna Maske takes a break after shoeing her horse, Whiskey. 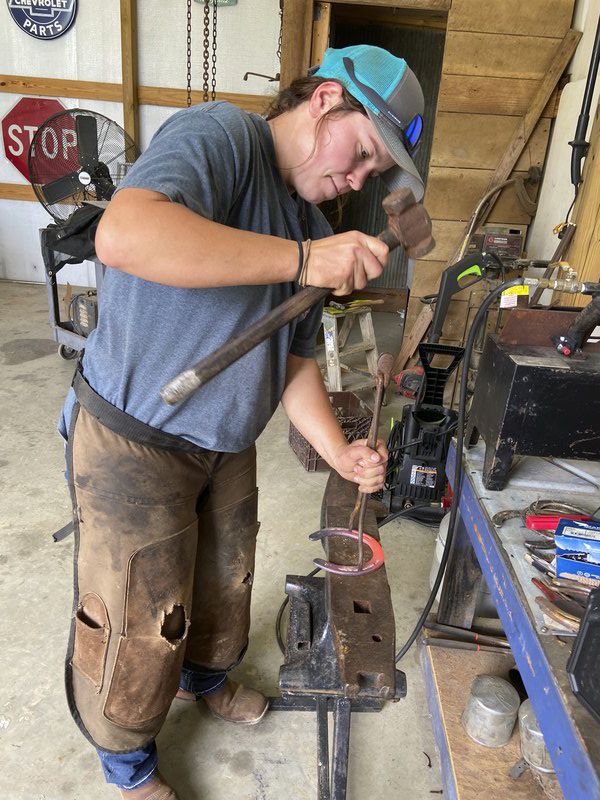 Savanna Maske heats a horseshoe in her shop just south of Newton. The 19-year-old says being a farrier is her true love, and she wouldn’t care to have any other career. 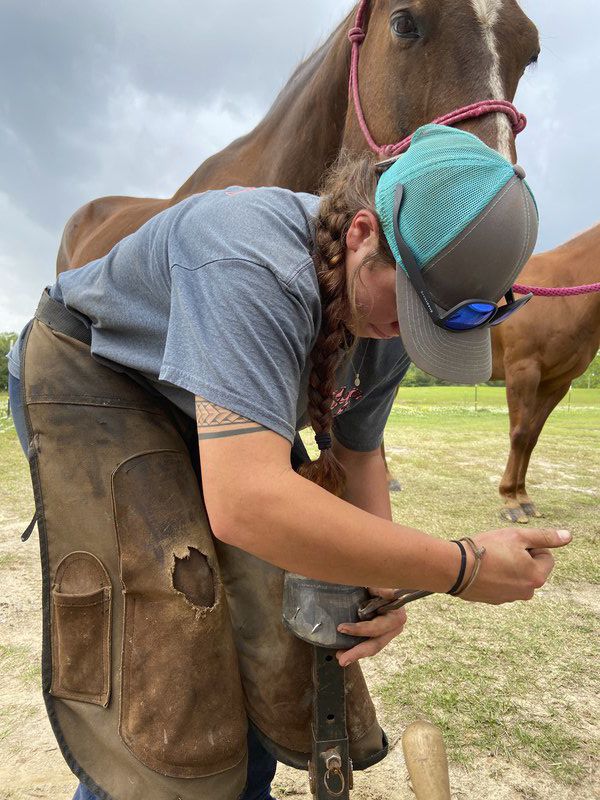 Savanna Maske applies a horseshoe to her horse, Whiskey.

NEWTON — One summer day before her sophomore year at Newton County Academy, Savanna Maske woke up and decided that school was not for her.

She asked her mother, Michelle, to homeschool her, and three years later, at age 16, she graduated.

“I had no interest in college, but I didn’t really know what I wanted to do at that point,” Maske said.

She found herself working at the dairy farm down the road from her home. In her spare time, she broke colts for people. She always had a love for animals and the outdoors.

“I saw an ad on Facebook about farrier school, and I realized this was the first time I had been excited about a career,” Maske said.

“I worked as an apprentice for five months with Stanley Pritchett. I watched; I learned, and I worked with all of the horses and donkeys I could," Maske said. "Right before Thanksgiving 2017, I went out on my own with my SM Farrier Services.”

Maske says she stays busy, traveling around Mississippi and Alabama.

“I’ve had side jobs like working in the chicken houses at Myers Processing and helping in the burial of veterans at the Mississippi Veterans Memorial Cemetery,” Maske said.

But her work as a farrier is her true love, and she wouldn’t care to have any other career.

“I always said I didn’t really know what I was doing with my life, but I know now it’s meant to be spent under a horse,” Maske said.

She prides herself on her ability to do the jobs that some farriers refuse to do.

Not only does she shoe high-strung horses, but her knack for working with donkeys and mules is uncanny.

“I guess they just sense that I am not afraid, and they know I don’t intend to hurt them,” Maske said.

"Being a farrier is an art. Our hands are our metaphorical paintbrushes. There is something about the ring of an anvil and a hot shoe being shaped that brings people out to watch.”

On a recent day, with four broken toes – the result of a skittish mare – Maske understands the physical risks of being an exceptional farrier.

“Farriers suffer from back pain, injuries from kicks and bites, you name it,” Maske said. “The pros outweigh the cons. There is nothing more satisfying than leaving a farm knowing that I helped an animal. If I can help one horse and make his life a little better. That’s all that matters.”

She didn't always appreciate those benefits.

“I said seven or eight years ago that anyone who was a farrier was either crazy or had a death wish, but I became one of those people," Maske said. "Someone has to step up to the plate and do it, and it’s all worth it in the end.”