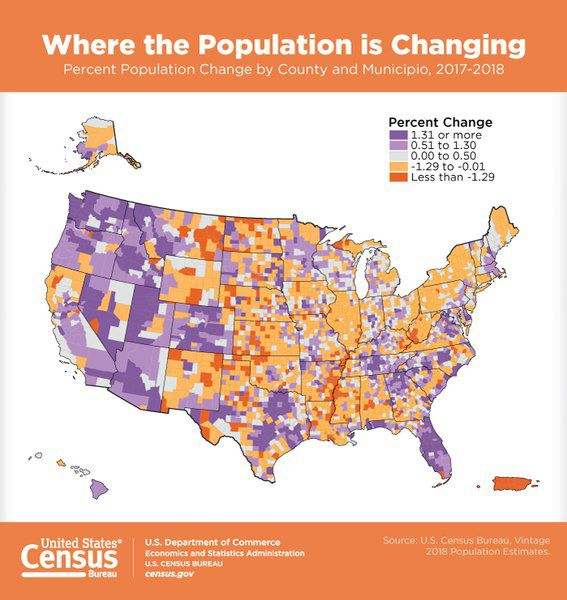 This map, from the U.S. Census Bureau, shows estimated percent population changes across the country. 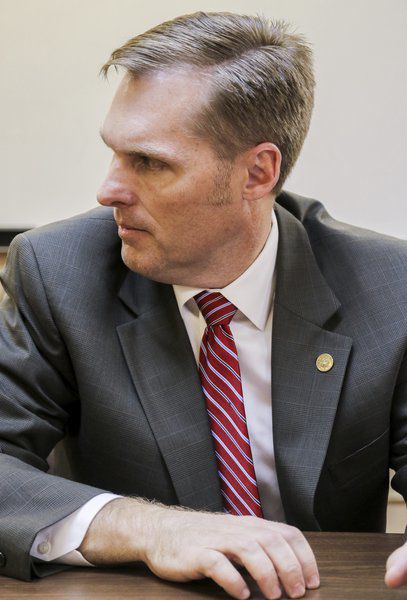 Rep. Michael Guest, Miss.-3rd, discussed the effect of census results on the state.

An estimated 9,304 people moved away from East Mississippi between April 2010 and July 2018, with two-thirds of those people leaving Lauderdale County, according to the U.S. Census Bureau.

The Census Bureau released estimated population changes for the country on Thursday, breaking numbers down by counties. Counties included in the East Mississippi calculation are Kemper, Lauderdale, Newton, Neshoba and Clarke.

Michael Guest, the 3rd Congressional District U.S. House Representative, represents all but Clarke County in the above calculation and lost an estimated 17,339 residents across 18 counties, gaining 11,875 residents in Rankin and Scott counties.

"There is a great importance with the upcoming census," Guest said Thursday during a visit to The Meridian Star. "Mississippi is on the bubble of maintaining or losing a member of Congress... we have a small delegation to begin with so the loss of one of those would be detrimental."

Guest's district also includes parts of Madison County and Oktibbeha County, which both saw population increases, but these counties were not included in Guest's overall population growth because the Census Bureau included only breakdowns by counties.

Guest stressed that the figures calculated in the census would impact grant funding opportunities in the state for the next decade.

"Those numbers are going to affect the entire state as a whole as well as the counties and the cities," Guest said. "It could have some bearing on federal funds and the amounts that each county would be eligible for."

According to the Census Bureau, 132 programs used its data to distribute more than $675 billion in funds in the 2015 fiscal year, including Supplemental Nutrition Assistance Program (SNAP), Highway Planning and Construction and Head Start.

In May 2018, the Meridian Housing Authority received more than $2.1 million from the U.S. Housing and Urban Development Public Housing Capital Fund, which funds modernization and development housing, according to usaspending.gov.

The Public Housing Capital Fund, according to the Census Bureau, spent more than $719 million based on census data in 2015.

Each of the 435 congressional districts across the country represents approximately 710,000 people, according to govtrack.us, giving Mississippi's estimated three million residents four districts.

The Census Bureau estimates that Mississippi gained approximately 16,000 residents between 2010 and 2018, with the majority of those gains in the Jackson, Gulf Coast or Memphis area.

In a news release, the Census Bureau said counties in the South and West had the biggest growth, such as Dallas-Fort Worth-Arlington, Texas with 131,767 new residents or a 1.8 percent increase in the last year.

Approximately 53 percent of counties, or 1,661, lost population between 2010 and 2018. In the upcoming months, the Census Bureau will release more detailed population estimates, including breakdowns by cities, demographics and housing unit estimates.

For Guest, in order to change the tide of Mississippi's declining population, the focus needs to be on encouraging businesses to relocate or expand current operations in Mississippi.

Guest said that with his position, he could help with economic development throughout his district and building up workforce development, especially in rural areas.

"There's also a great need for our educational system to do a better job at training people so that when they leave they have a marketable skill," Guest said, referring to K-12 education. "I think we have begun to identify that but it's going to take (them) revamping our education."

When the U.S. census is taken in 2020, will you answer its questions?