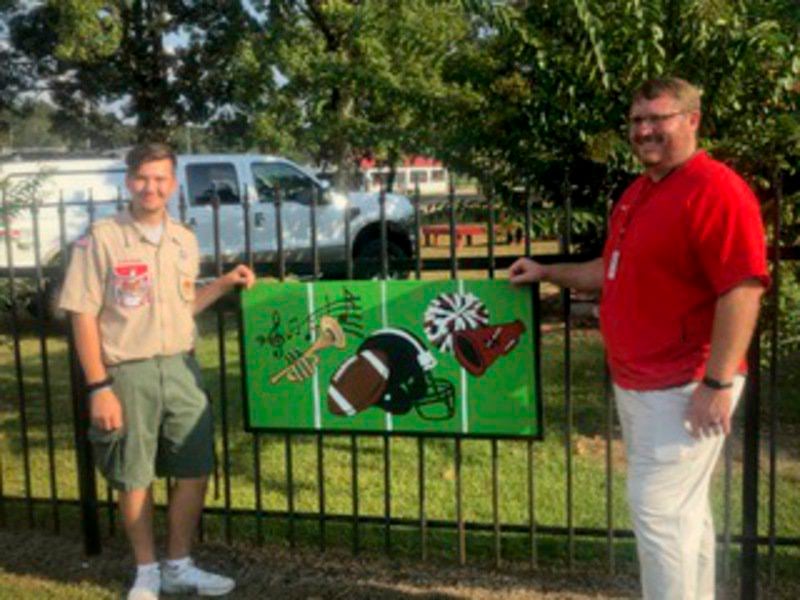 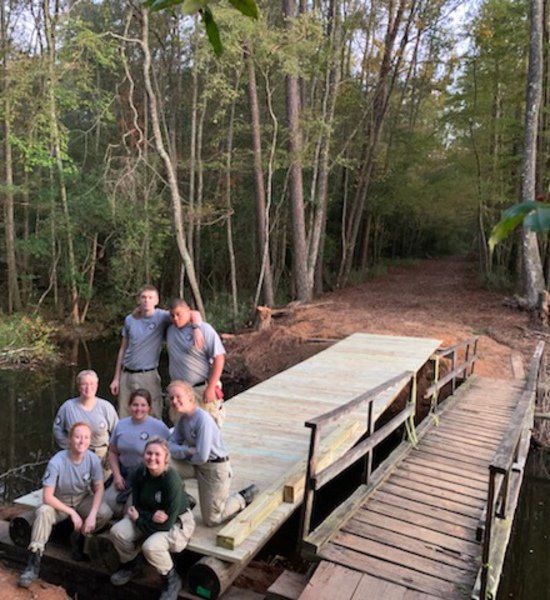 Robert Baden-Powell, the founder of the Scout movement, once said, “An invaluable step in character training is to put the responsibility on the individual.”

That is just what the Eagle Scout Service Project does. Often seen as the most difficult step in attaining the rank of Eagle, this requirement puts a Life Scout in charge of planning, developing and giving leadership to others in a service project helpful to any religious institution, school or community.

Hunter Junkins, Life Scout in Troop 16, after much thought, decided he’d plan a beautification project for the Grove at West Lauderdale High School.

It was not an easy decision.

“I guess I’m like most Scouts when it comes to this,” said Junkins. “I had so many ideas – some for my school, some for my community, but in the end, I chose to do my project for the school.”

After getting approvals for his idea, Junkins designed artboards that would be displayed on the fence at the Grove throughout the year.

“I enjoyed going through the process of designing the artboards,” he said. “My grandmother was a big help, and we had fun working together.”

“That’s a great idea,” said Swartz. “It’s one that other Scouts could build upon by creating other themed artboards for the Grove display.”

After purchasing materials needed for the project, Junkins and his grandfather cut the plywood to size.

Next, all the background colors were painted on the 24X48 inch plywood boards. Following that, Junkins’ designs were broadcast and traced onto the artboards.

Hunter said his biggest fear would be getting and keeping everyone’s attention on the task, and he also worried about the quality of the work.

He discovered he had no worries, because Troop 16 Scouts, adult leaders, and family members were there to help him complete his project.

“Everything went as planned,” he said. “All the volunteers were enthused with the project and worked diligently to provide excellent, quality work. I was able to provide guidance as well as praise for a job well done. Everyone seemed to enjoy themselves, and I was extremely pleased with the participation and project results.”

Junkins said he learned a lot.

“I was amazed at what could be done with help, encouragement, and praise. I learned that I don’t have to do everything – my team proved to be very capable and enthusiastic,” he said. “They let me be the leader and sought out my guidance when needed.”

On Sept. 17, Junkins was joined by West Lauderdale Principal Shane Rodgers to complete the next step in the project. Junkins and his father installed the metal frame his father built onto the fence at the Grove. Then the principal and the student placed the first artboard in place.

Rodgers was pleased and appreciative.

“This is a great addition to the West Lauderdale campus,” said Rodgers. “I think it is beautiful and I appreciate the hard work.”

“I’m enjoying the satisfaction of a job well done, and I am so proud of the work provided by the volunteers from Troop 16 and my family. It was also a good feeling when I saw how pleased Mr. Rodgers was with the project artboards.”

Junkins completed his Eagle Scout board of review on Nov. 12, making him an Eagle Scout as of that date.

A team of AmeriCorps members recently finished the construction of a new bridge during their two-week assignment at Clarkco State Park near Quitman.

Park manager Tony Fleming said the bridge will be named the Bayou Bridge in honor of all team members assigned to Clarkco State Park.

In addition to constructing the 40-foot bridge, the talented young people built and installed benches, cleaned campsites, and cabin areas, and cut firewood, according to Fleming.

Graveside services for James Michael Brand will be Wednesday, July 8, 2020, at 11 a.m. at Chunky Cemetery in Chunky, Miss. James F. Webb Funeral Home is honored to assist the family with these arrangements. James Michael Brand, 52, of Meridian, Miss. died Sunday, July 5, 2020, at Anderson Re…

Arrangements are incomplete at Berry and Gardner Funeral Home for Mr. Willie Smith, 79, of Meridian, who died Monday, July 6, 2020, at The Specialty Hospital of Meridian.

Arrangements are incomplete at Berry and Gardner Funeral Home for Ms. Willie Lang, 84, of Meridian, who died Friday, July 3, 2020, at her residence.