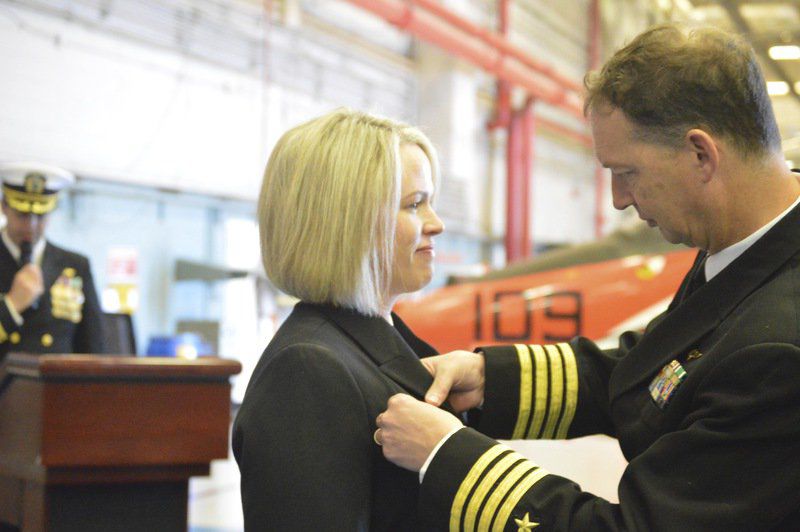 Commander Meghan Angermann is pinned by her husband, Capt. William Angermann, during a Change of Command Ceremony Friday at Naval Air Station Meridian. 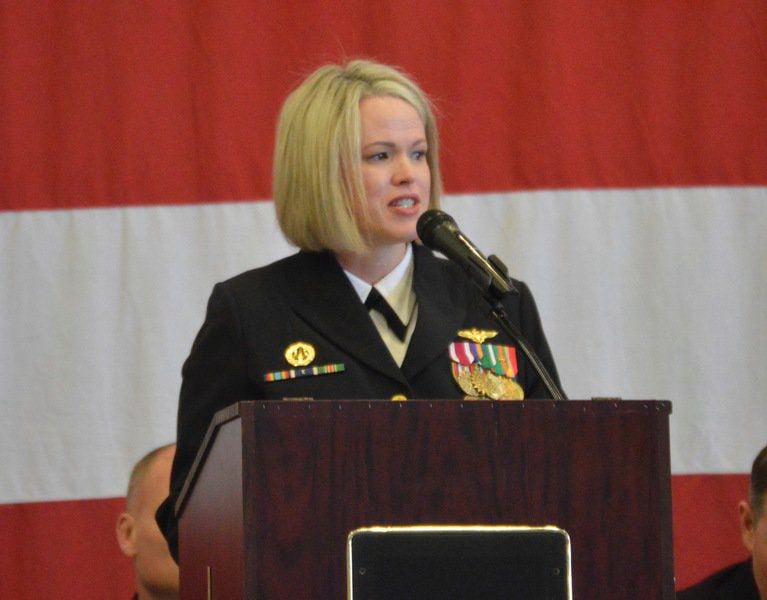 Growing up, Commander Meghan Angermann never imagined she would one day have a career in the military.

“I'm thankful for this opportunity and thankful that women are able to serve in more positions,” Angermann said as she became the first woman at NAS Meridian promoted to commander of a squadron.

Angermann, who was previously executive officer of the squadron, assumed the role during a change of command ceremony at NAS Meridian.

She's been in the Navy for 20 years, including 11 years in Meridian, and will serve as commander for 15 months.

Angermann is a native of Naperville, Illinois and became a member of the Naval Reserve Officer Training Corps unit at Marquette University in Milwaukee, Wisconsin, in August 1996. After graduating with a bachelor of science degree in biomedical engineering and commissioning in May 2000, she reported to flight training in Pensacola, Florida.

She later earned a master of arts degree in national security and strategic studies from the United States Naval War College in Newport, Rhode Island.

When she was young, Angermann said she didn't picture herself being in the military. Her interest in aviation was piqued by her father, who was a pilot.

“My favorite part is ... teaching students and making those connections,” Angermann said. “It's really rewarding when you see the light bulb come on and know that they're absorbing and learning.

“I'm very excited for this opportunity to lead Training Squadron Nine and to train our next generation of Naval aviators,” she said.

Angermann’s role was previously held by Commander Brian Baumgaertner, who retired on Friday after 20 years of service.

Baumgaertner said he wishes he could stick around to see what Angermann will bring to the squadron.

"She's a great leader and will take the squadron to new heights," Baumgaertner said.

Commander Meghan Angermann earned her Wings of Gold from NAS Meridian in January 2003. After winging, she was assigned to VT-9 as a Selectively Retained Graduate as an Instructor Pilot in the T-45C Goshawk. Other duty sections include Strike Fighter Squadron 122 in Lemoore, Calif., for fleet replacement training in the F/A-18F Super Hornet; Strike Fighter Squadron 211 where she served as Air-to-Ground Weapons Training Officer.

During this tour, Angermann deployed twice aboard the USS Enterprise (CVN-65) with Carrier Air Wing ONE (CVW-1) in support of Operation Iraqi Freedom and Operation Enduring Freedom. Angermann served as an instructor for NATOPS, Instruments, Night Vision Goggle (NVG) training, and Crew Resource Management (CRM), and earned her wing qualification as a Landing Signals Officer (LSO) and her combat division lead qualification.

During this tour, Angermann graduated from the Command and Staff College Distance Education Program from the Marine Corps University.

In March 2014, Angermann reported to Commander, Navy Reserve Forces Command in Norfolk, Virginia. During her time at CNRFC, Commander Angermann served as Assistant Deputy Chief of Staff for N5, Plans and Policy and as the Secretariat to the Navy Reserve Policy Board.

She earned a master of arts degree in national security and strategic studies from the United States Naval War College in Newport, Rhode Island.

Arrangements are currently incomplete at Berry & Gardner Funeral Home for Mrs. Johnnie Ruth Thurman, 72, of Enterprise, who died Tuesday, July 27, 2021, at her residence.

In keeping with the wishes of Mrs. Dorothy Davis and her family, there will be no services. Mrs. Davis, 56, of Meridian, died Monday, July 26, 2021, at her residence. Arrangements entrusted to Berry & Gardner Funeral Home.

Mrs. Teresa Holland Wallace passed away on Sunday, July 25, 2021, at her residence. Mrs. Teresa was a beloved teacher at Northeast Elementary School for over twenty years. She is survived by her husband of 41 years, Stephen Wallace; daughters, Stephanie Engell (Doug), Heather Wallace; son, C…