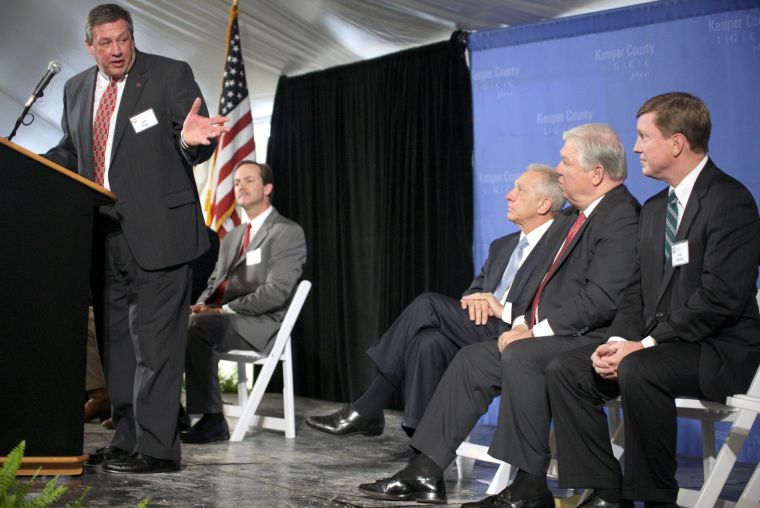 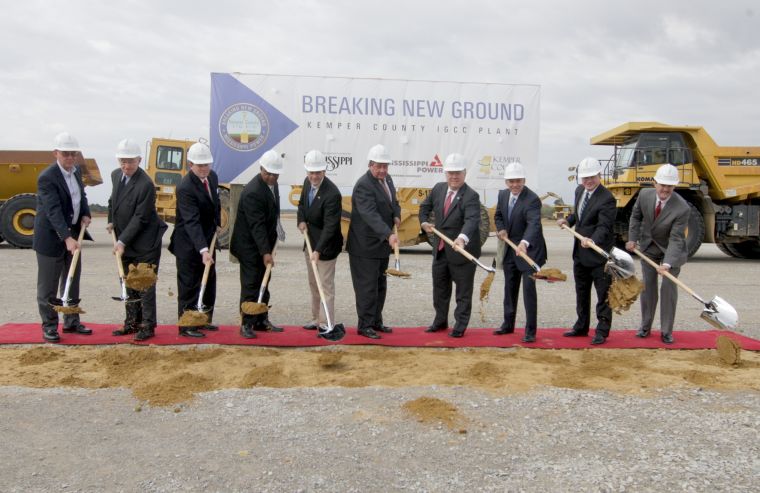 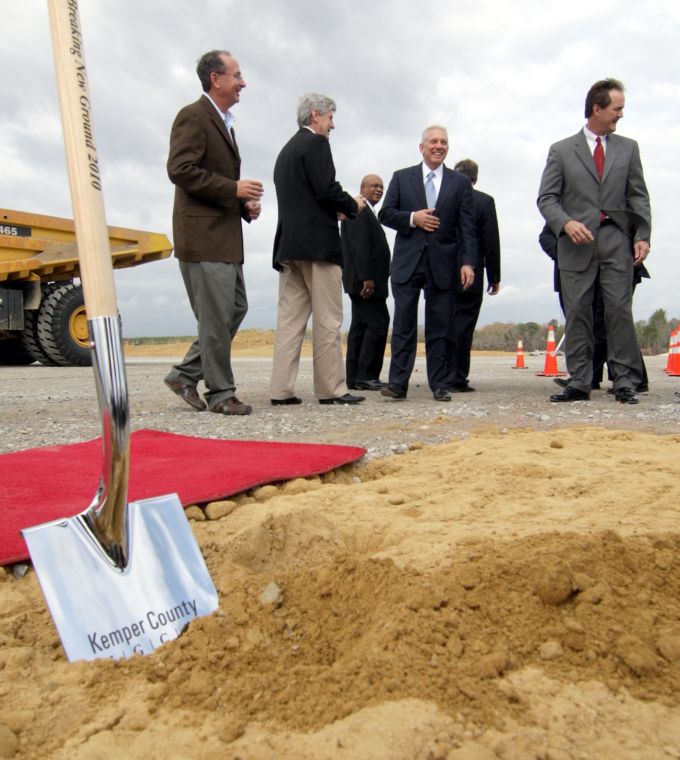 Workers have already begun to clear trees and move dirt at the power plant site. Mississippi Power erected a large white tent at the base of the expansive clearing to accommodate the more than 200 guests at the invitation-only ceremonial groundbreaking.

The site is located on Hwy. 493 near the town of DeKalb in Kemper County, about 20 miles north of Meridian. It's a quiet drive along Hwy. 493 to the plant site, with little to see other than pine trees, but the undeveloped stretch of the rural county is expected to become a center of activity thanks to the power plant and its projected 260 permanent jobs.

Brian Henson, of the Kemper County Economic Development Authority, was the first of a succession of speakers, including Gov. Haley Barbour and Southern Company CEO Tom Fanning, to address the crowd Thursday morning.

Henson was followed by Kemper County Supervisor James Granger, who called the plant, "a prayer that has been answered," and then led the crowd in a new prayer of thanks.

"$2.4 billion are going to be invested in this community," said Barbour, who spoke later in the ceremony. "Prayers of thanksgiving are very appropriate here."

"It takes a great team. It takes a great support and great partnership (to build a plant like the Kemper IGCC plant)," Topazi said before recognizing a long list of people and organizations that contributed to the project, especially Barbour, who he said, "has created policies and actions that have given the children of Mississippi a brighter future than we could imagine."

"As long as I'm governor, Mississippi is going to have an energy policy, and our energy policy is more American energy," Barbour said. "It's projects like these and efforts like this that will help us (economically), not only now, but in the long term. . . This is going to produce reliable power for Mississippi for decades and decades to come."

The plant will use a technology called Integrated Gasification Combined Cycle to turn coal into a gas, and the gas will then be used to fire the plant. Because of the use of gasification, the plant will be able to use a high-moisture coal called lignite, which is cheaper than traditional coal and found abundantly in Kemper County.

Mississippi Power also calls the project a "clean coal" project because they will capture and sequester 60 percent of carbon dioxide emissions and a large portion of the plant's other emissions as well.

They also say the accompanying mining operation by North American Coal will have a minimal environmental impact, with land being restored as closely as possible to its original state after the mining is done.

But Barbour praised the plant for its relative eco-friendliness, saying, "The Left said there's no such thing as clean coal — Well, this is it!"

He also praised the project and its technology for creating a new commodity for Mississippi. "I can remember when lignite was a nuisance," he said. "Now, with this, lignite has become a valuable resource for Mississippi."

Barbour also talked about the positive economic impact the plant, with its projected 1,000 temporary jobs during construction, has on all of East Central Mississippi and on Mississippi as a whole.

Barbour said 50 Mississippi companies are already involved with the project, and he noted, "I've seen all the folks here from Meridian who understand this project isn't just for Kemper County."

Indeed, Meridian had ample representation at the ceremony, including Mayor Cheri Barry, several city department heads, most of the Lauderdale County Board of Supervisors, and several state legislators from Meridian.

Tom Fanning, the CEO and President of Southern Company, also spoke at the groundbreaking, touting the IGCC technology.

"We believe, with all the issues facing coal in America, this technology is the way forward to preserve the United States' most plentiful energy resource," he said, adding that IGCC makes America a leader in modern energy technology.

He also touched on the local impact of the plant, saying, "We think that Kemper County, Mississippi will be much better off because we're here."

The plant is scheduled to be operational in 2014. For more information on the project, visit www.mississippipower.com.