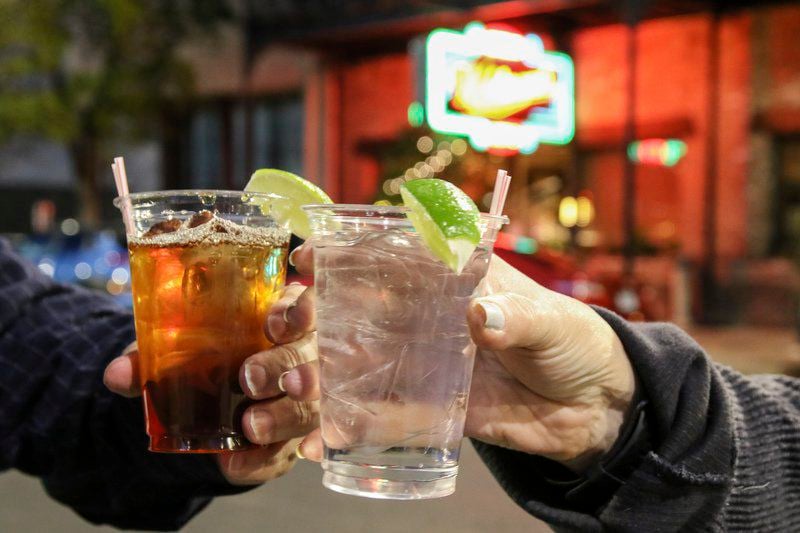 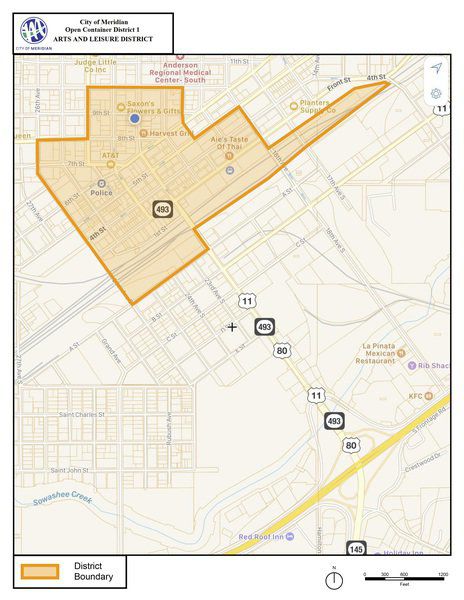 The open-container ordinance is limited to Meridian's Arts District, an irregularly-shaped area extending to a section of A Street to the south, part of 10th Street to the north and mainly between 18th and 26th Avenues.

Want to take that drink to go?

Starting Jan. 30, on certain nights in downtown Meridian, you'll be able to.

It allows customers of participating downtown restaurants, bars and breweries to bring a to-go cup of alcohol outside on Thursday, Friday and Saturday nights from 5 to 11 p.m. and during special events.

Customers will be able to carry only paper or plastic cups up to 16 ounces – not glass containers, bottles or cans.

Cups cannot be brought back inside businesses.

The district is located within an irregularly-shaped area, extending to a section of A Street to the south, part of 10th Street to the north and mainly between 18th and 26th Avenues.

According to the ordinance, House Bill 1223, which passed in the Mississippi Legislature in 2016, allows the establishment of “leisure and recreation districts” in certain cities.

“It’s just one more playing card in our deck,” she said. “By and large across the state, this has been a positive thing.”

Hattiesburg established a downtown go-cup district in 2017 and has another one in the midtown area.

“It is not something in and of itself that is going to suddenly generate business,” said Andrea Saffle, the executive director of the Downtown Hattiesburg Association. “What it does is it eases restrictions to allow the businesses to work more closely together to thrive.”

Saffle said the policy has streamlined the process for planning activities such as block parties or other events.

“It’s been really well-received. We’ve not had any issues with it whatsoever,” Saffle said.

Charles Frazier, the owner of Weidmann’s Restaurant in downtown Meridian, said he’s all for it.

In the past, he’s had to tell customers headed to the MSU Riley Center or visiting from out of town that they can’t bring their drinks with them.

“I think that it shows that we are a progressive city and that we’re embracing sort of modern times and the modern trends as far as alcohol consumption,” Frazier said. “Overall, it’s great for the city. It’s going to spur more businesses down here. We need more restaurants, more bars, more things for people to do and so I think that’s going to facilitate that.”

Elic Purvis, who owns Jean’s, a restaurant on 22nd Avenue, believes the ordinance will benefit both businesses and customers.

“It creates more of a protected environment in the immediate downtown area to travel back and forth without worry of getting ticketed or getting in some sort of trouble, which is great for events,” he said. “It’s a good thing all around. It promotes revenue for the city itself.”

Terrence Roberts, the pastor of Parables Church on C Street, said he understands the opportunity the ordinance brings for more nightlife downtown, but worries the policy would make it more difficult for a bartender to know when someone is over the limit.

“My big concern is that it could be used to allow people to overindulge in a way that would hinder the safety of our community,” Roberts said.

Before the city council's vote on Dec. 17, Ward 2 Councilman Tyrone Johnson said he wanted to look out for the safety of citizens and questioned if the ordinance could lead to an increased risk of deadly car crashes.

“Who does this open cup carry here in Meridian benefit,” he asked?

The Mississippi Department of Mental Health administers the public system of alcohol and drug use prevention and treatment services in Mississippi through the Bureau of Alcohol and Drug Services, according to its website.

“We just have to hope that the people that participate in this will do it responsibly,” said Ward 4 Councilwoman Kim Houston. “I have some of the same concerns that Mr. Johnson has.”

Councilman George Thomas of Ward 1 said the new law would give police an opportunity to patrol more downtown.

“It’s not forcing anyone to drink that doesn’t want to drink,” he said.

Ward 5 Councilman Weston Lindemann said the council could repeal the measure like any other if it does not work out.

Cody Warner, who was eating lunch downtown at Mimmo's Friday, supports the idea.

“It allows you to be more sociable, get around and see more people,” Cody Warner said.

OUR VIEW: A toast to Meridian's new open-container law - and safety

Cheers to Meridian’s new open-container ordinance – with some reservations.

Editor's note: Since this story was first published, the city revised the effective date of …