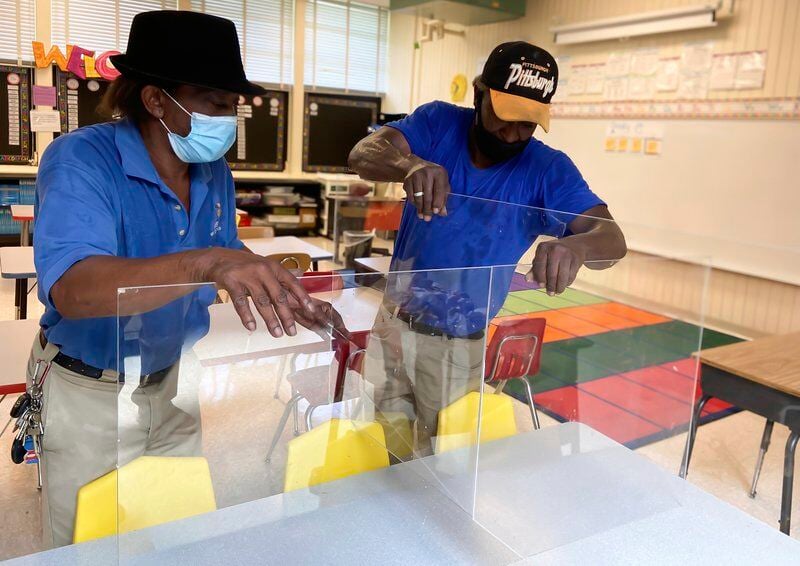 Tommy Croft and Eddie Ford install plexiglass dividers on desks in a classroom at Oakland Heights Elementary School in Meridian on Wednesday. The dividers are part of a district-wide effort to protect students after schools were closed in March as the COVID-19 pandemic spread. 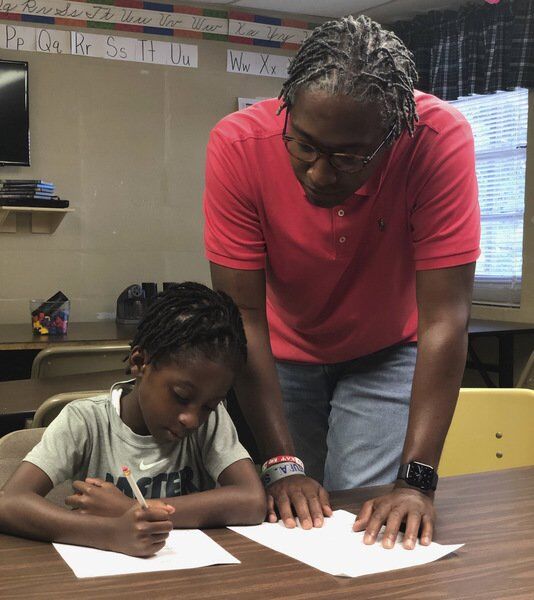 "I think the Meridian School District is doing the best it can to give us a sense of normalcy," says Sa’Ron Heath, shown with his son, Langston. 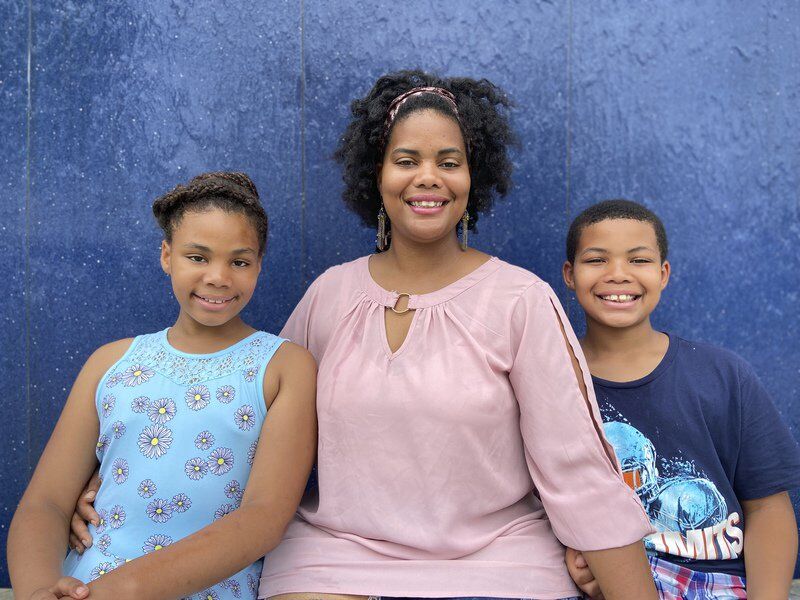 Raven Lott (center) with her children Sylaria Nuby and Hezziakiah Nuby, who will participate in virtual learning instead of attending school on campus this year. 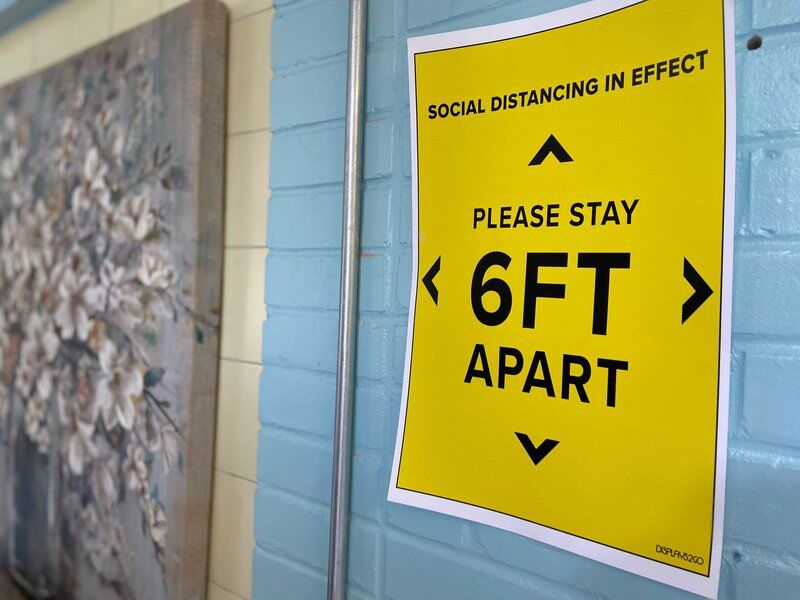 A sign at Oakland Heights Elementary reminds students to stay 6 feet apart, one of many COVID-19 guidelines the school will follow in the coming school year. 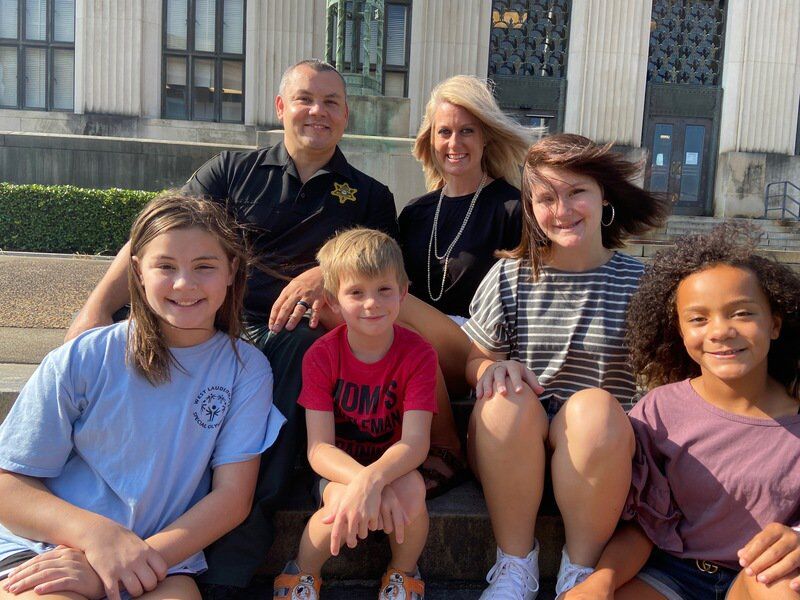 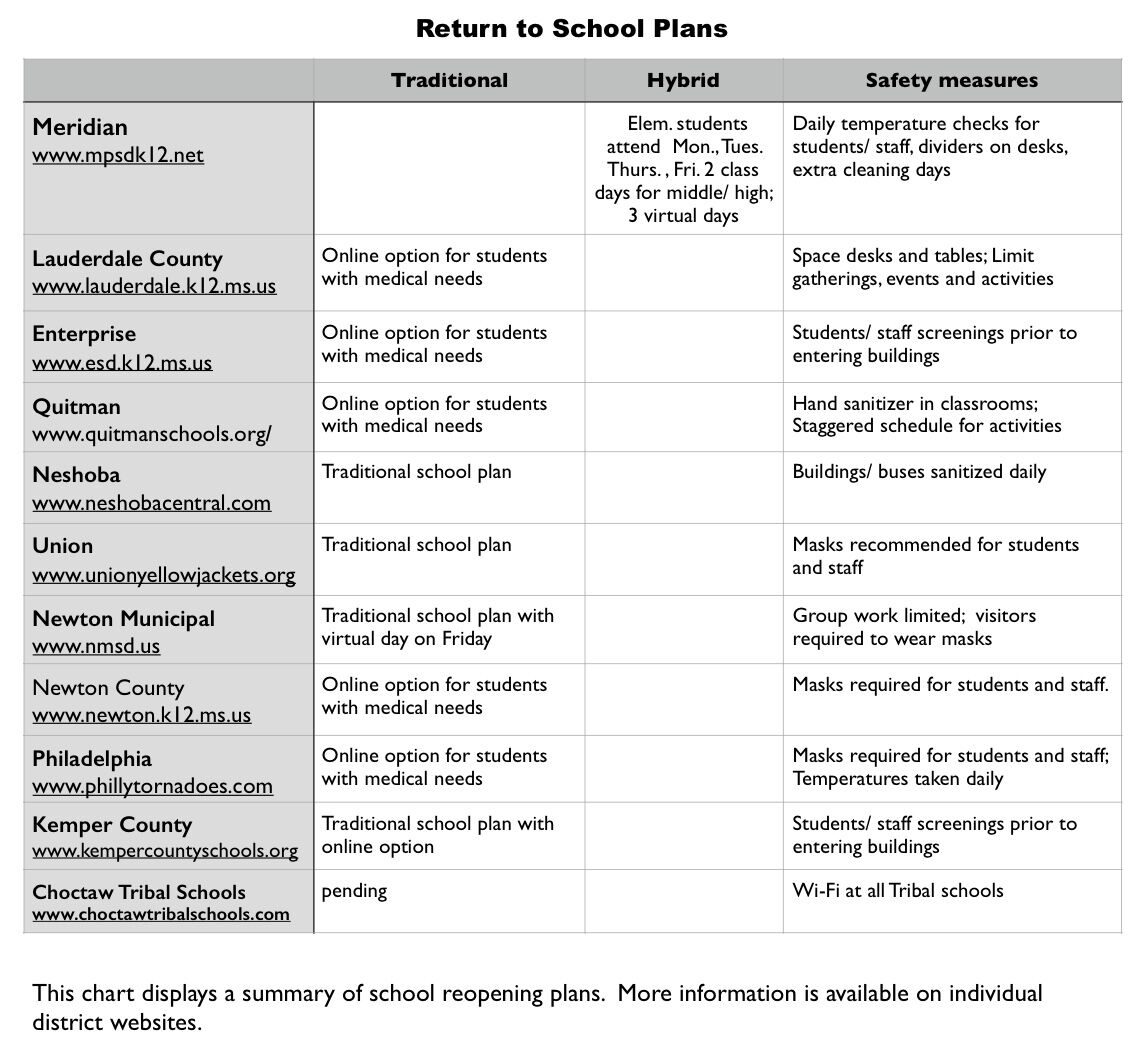 Tommy Croft and Eddie Ford install plexiglass dividers on desks in a classroom at Oakland Heights Elementary School in Meridian on Wednesday. The dividers are part of a district-wide effort to protect students after schools were closed in March as the COVID-19 pandemic spread.

A sign at Oakland Heights Elementary reminds students to stay 6 feet apart, one of many COVID-19 guidelines the school will follow in the coming school year.

The campus at Oakland Heights Elementary school in Meridian, mostly empty after it was closed during the COVID-19 pandemic this spring, is slowly coming back to life.

Local school officials, like others across the country, are learning to adjust to new challenges to educating children while assuring their safety as students prepare to return to campus in a few weeks.

Schools were closed in mid-March as the COVID-19 pandemic began to spread through Mississippi. The numbers have gone up greatly. In the last eight days, Mississippi has added 7,238 COVID-19 cases for a total of 40,829.

Public school districts are offering either traditional schedules or hybrid learning programs, and parents are weighing what's best for their children as schools prepare to reopen.

Parents and educators have struggled to find the balance between competing priorities – returning students to classrooms while protecting their safety and their family's safety.

“I'm sending my own two kids back and people need to know that,” said John-Mark Cain, superintendent of the Lauderdale County School District, which is offering a traditional format. “I know we are going to do everything to keep them safe.”

Not all parents are reassured.

"My concern is that they don't have a strong plan in place to keep students safe," said Cynthia Crouch, a parent of Lauderdale County students. "I think it's a terrible idea and reckless without an online option."

Crouch is among some parents who prefer options such as those offered in the neighboring city school district. She created a petition, asking the district to provide a distance-learning option for anyone requesting it. The petition had more than 250 signatures Friday morning.

The Meridian Public School District is planning a hybrid schedule, with classes starting on Aug. 10. Elementary students, which includes up to fifth grade, will attend school four days a week while secondary students, sixth grade and up, will attend twice a week. Wednesday the district will offer online instruction, so schools can be deep cleaned. 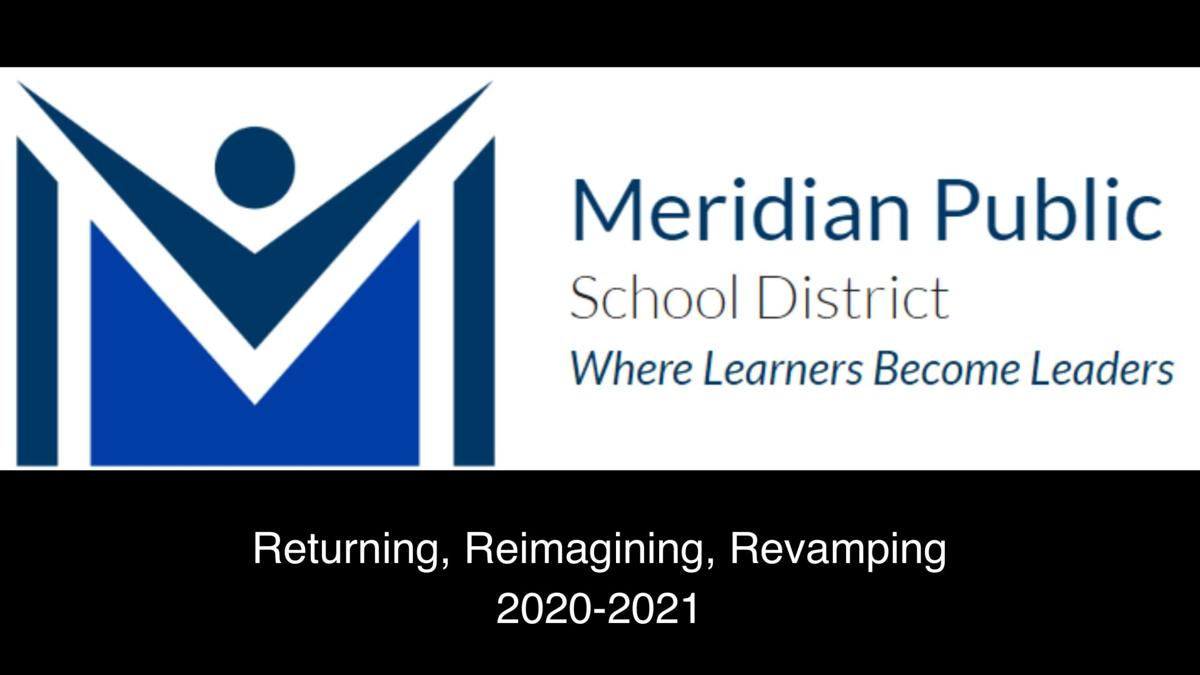 Under the plan, desks will be 6 feet apart in classrooms and school uniforms won't be required. That option was made in recognition of a financial hardship some families are facing because of the pandemic. Students and staff will be asked to wear masks and will be provided masks if needed.

Parents who aren’t comfortable sending their children to classrooms can opt for online learning.

Meridian Superintendent Amy Carter said the plan was designed based on guidelines from the Mississippi Department of Education and input from staff and families. More than 50 percent of the families the district surveyed said they weren’t comfortable with sending their children back to school.

The district started working on the plan in April and is prepared to move to an online format if schools are closed again, Carter said.

Sa’Ron Heath, the father of a third grader, said the district’s plan is a step toward normalcy.

“I don’t think there will be normality again until this pandemic has passed,” said Heath, who plans to adjust his schedule on virtual instruction day. “But I think the Meridian School District is doing the best it can to give us a sense of normalcy.”

He's not alone in seeing the pandemic as a long-term problem.

“I think the virus is pretty much here to stay,” said Shannon Jones, a mother of three Meridian students.

Jones is worried, however, that siblings may not be attending classes on the same day.

“I prefer my kids to be in the same group block,” Jones said. “I don’t want my son to be in group A and my daughter in group B, because that will be a conflict for me.”

Transportation, also, is a concern to her.

Parents will be encouraged to check their child’s temperature before they leave home, and buses will be loaded from front to back to encourage social distancing.

Jones said she plans to drive her children to school instead of allowing them to ride the bus.

“There’s no way they will be able to social distance on the bus,” Jones said.

Even with the safety precautions, Meridian parent Raven Lott is worried about schools reopening.

“I’m a concerned parent and I don’t want my child in the same classroom with 16 other children,” said Lott, who is opting for the virtual learning program. “Everyone will not be 6 feet apart, and you can’t afford to put them all in a bubble.”

Lott has joined with other parents to set up extracurricular activities for their children, such as field trips and choir.

The Lauderdale County School District will offer a traditional schedule, starting with a soft launch on Aug 6. Students will return to a full schedule on Aug. 17.

Superintendent John-Mark Cain said the district chose the traditional format based on parent and staff surveys and the lack of internet access in rural parts of the county. 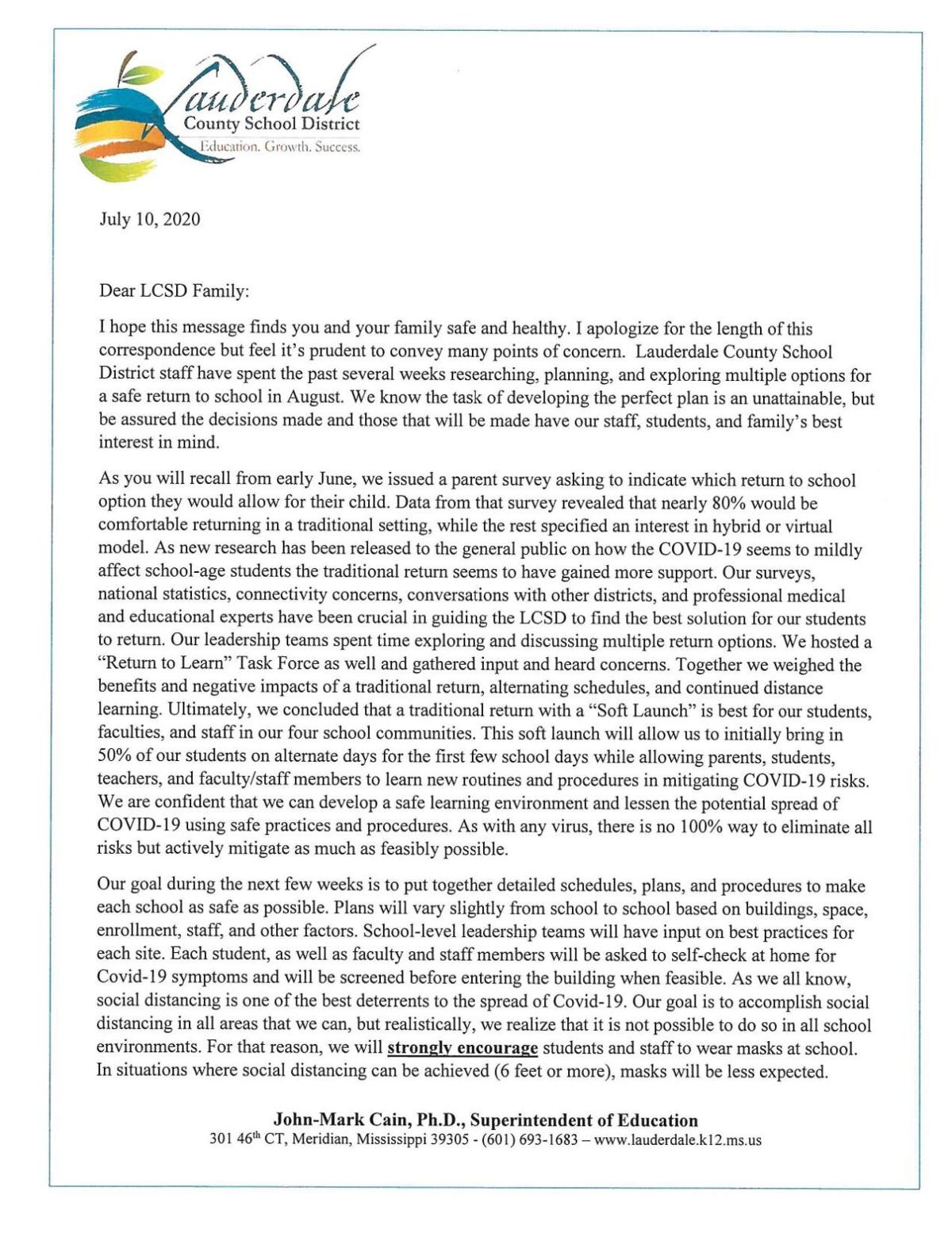 For students with health conditions that could be affected more adversely by COVID-19, the district plans to offer a blended option. Classes will be offered via web-conferencing with school staff and a digital platform to receive and submit assignments. Students will be required to periodically report to campus for scheduled assessments.

The district is also hiring an instructional technologist and more nurses and therapists.

The district will encourage parents to take their children's temperature daily before sending them to school. Meals will be delivered to the classrooms, and lockers will not be used. Uniforms will be required.

Students will be encouraged, but not required, to wear masks at school, according to the district plan. The district will provide two face masks for students and staff.

“I personally think the traditional schedule is a good way in reopening the schools,” Woodall said. “We are waiting and we are all for it.”

Woodall noted that online learning, which the district implemented after schools were closed in March, was a challenge in her home.

“At our house, we don’t have internet,” Woodall said. “All we have are hot spots and running off of cellphone data plan, which works sometimes. We were able to make it through just fine, but there were difficult moments.”

“All we have are hot spots and running off of cellphone data plan, which works sometimes. We were able to make it through just fine, but there were difficult moments.”

Woodall also had difficulty helping her children – who are in different grades – with their assignments.

“With four of them, they need the one-on-one,” she said.

Chastity Jackson, whose daughter attends Northeast High School, is concerned about schools reopening, but feels she doesn't have a choice.

“I’m not OK with schools reopening,” Jackson said. “I want my child to be safe and not come in contact with the coronavirus.”

Despite those concerns, Jackson plans to send her daughter back to school in the fall. 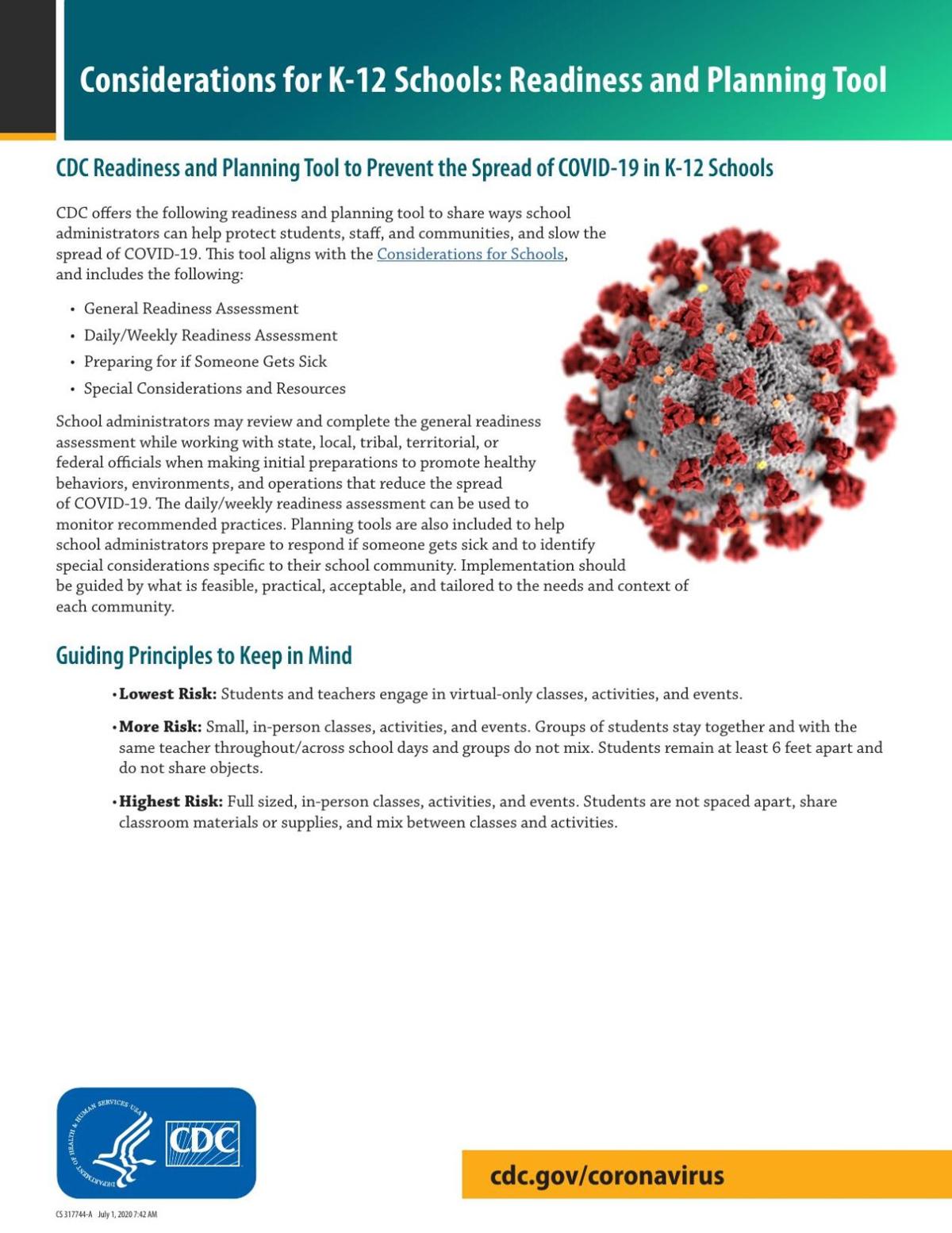 According to the Centers for Disease Control, students face a low risk of contracting COVID-19 if they participate in virtual-only classes, activities, and events.

Students face more risks in small, in-person classes, and are at high risk in large groups where they aren’t spaced apart.

The classroom environment gives younger students structure and interaction, according to Carlen Henington, a professor of educational and school psychology at MSU-Meridian.

“For younger children, having that physical contact with a teacher… those kind of interactions that occur naturally in the classroom are pretty critical in a human bond.”

“For younger children, having that physical contact with a teacher… those kind of interactions that occur naturally in the classroom are pretty critical in a human bond,” Henington said.

“It’s hard to learn a letter sound over a video,” Ethridge said. “It’s easier when you are face-to-face and learning how to read the numbers in math.”

“The children need to come back to school,” said Gloria Price, who teaches at T.J. Harris Upper Elementary. “I believe with the precautions the district has in place, it will be a safe environment.”

The Mississippi State Department of Health reported an additional 1,017 cases of COVID-19 on Saturday, with 30 of the new cases in Lauderdale County.

The Mississippi State Department of Health reported 792 new cases of COVID-19 and 10 new deaths on Sunday as the state totals rose to 41,846 c…