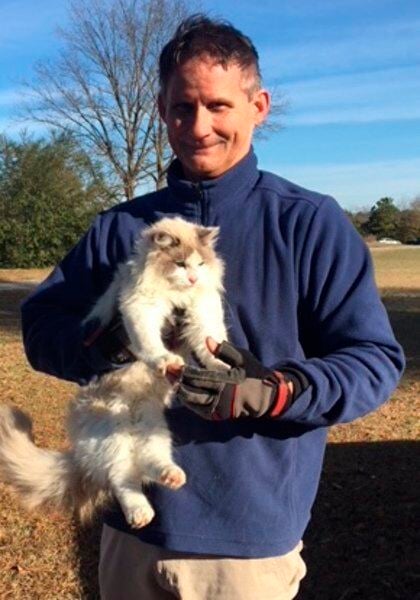 Bob Reese of Starkville travels around the region to retrieve cats who get stuck in the tall trees of Mississippi and surrounding states. 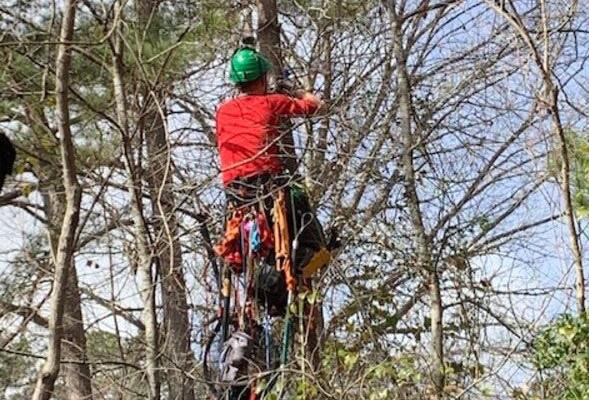 Bob Reese rescues a cat Greg Bordelon found in his tree in Meridian.

Most people will tell you that a cat has nine lives.

Bob Reese of Cat Stuck Tree Rescue of Mississippi believes in doing what he can to ensure that adage is true.

Reese, a resident of Starkville, travels within a driving radius of up to three hours to retrieve the forlorn felines who manage to get stuck in the tall trees of Mississippi and surrounding states.

Reese's heroics were formally recognized in April as he was presented with the 2020 Governor’s Initiative for Volunteer Excellence (GIVE) Award during a ceremony in Jackson.

According to Krista Estes, Volunteer Network Officer, The GIVE Awards were established through the office of the Governor and Volunteer Mississippi to recognize individuals and organizations making an outstanding impact in their communities through their gifts of service, advocacy, and outreach on behalf of the citizens of Mississippi.

Reese was nominated by Martha Thomas, the director of community relations with the Oktibbeha County Humane Society.

Thomas explains that Reese never asks for a fee for his rescue efforts. “Instead, he suggests that they make a donation to the Oktibbeha Humane Society if people wish to compensate him,”she said. “Since January 2020, we have seen an increase from $8,000 to $10,000 for our organization, primarily due to Reese’s efforts".

“I think Bob’s selflessness is inspiring,” she added. “More people should know about him and the volunteer service he provides—both for the sake of cats stuck in trees and as an inspiration for the impact a single person can make in our state.”

Reese, 62, fully intends to continue doing what he loves.

“In 2013, our family cat, Sammie, found himself stuck in our 30-foot pine tree,” he recalled. “While Sammie came down on his own, it was the beginning of my kitty-rescue adventure. I ordered equipment, watched YouTube videos, made mistakes, but still kept on learning as I went.”

Reese’s highest rescue was a cat stranded 90 feet high, but his strangest was a 30-pound coon dog stuck 30 feet high. Some rescues are as quick as 30 minutes; others take hours and multiple attempts.

Using these two variables, he says, “A kitty then falls into four categories.”

Friendly traveler: A friendly traveler is the best kind of kitty as they are happy to see you and come to you when you get close to them. They will often descend as you climb the tree, reducing the amount of work that you have to do.

Friendly, non-traveler: A friendly non-traveler is good as well, except they are too frightened to move very far from their perch. However, their "meows" are friendly meows, and they are happy to see you.

Skittish traveler: Any cat rescuer will tell you that these are the most difficult type of kitties to rescue. They are scared of you and will try to get away from you in the tree by either climbing up higher, moving to other limbs/trunks, or even jumping to other trees or out of the tree. The most feral kitties are in this category.

No matter the variable, or the category, Reese is committed to helping the kitty get to safety.

“My trusty "kat-phone" starts buzzing, and I know it’s time to get my gear and go,” he says. “I urge people to give a cat at least 24 hours to come down on its own unless it is injured or is wedged between limbs and unable to move. This waiting period is generally harder on the person than it is on the kitty. But, after 24 hours, it becomes less likely that the cat will be able to make it down without assistance.”

To those naysayers who say, “Have you ever seen a cat skeleton in a tree?” Reese explains that one doesn’t see a skeleton because the cat will eventually weaken and fall out of the tree.

“A cat can easily survive three to four days in a tree with no long-term health effects,” he emphasizes. Some have been rescued after seven to ten days. I urge people to seek help from some source to rescue the cat.”

Greg Bordelon of Meridian can attest to Reese’s cat wrangling skills. He recalls finding a cat belonging to someone else in his backyard on a Friday afternoon.

“The cat was 25 feet off the ground, and by Saturday morning, he was still there,” he said. “I posted an SOS on social media, and Bob Reese was tagged along with his info. I’m not even a cat fan, but I knew I had to do something. I had tried calling the fire department and police dispatch with no luck, but [Reese] soon arrived and went to work.”

Bordelon describes Reese shimmying up the skinny tree, using a rope to secure himself as he moved higher and higher. After a successful rescue, he was amazed that Reese refused payment.

“He told us we could donate to the Oktibbeha County Humane Society if we wished to compensate him for his work, although he made sure to tell us it was not a requirement for any of his rescues,” he adds.

Lucy Dormant is another resident of Meridian who was a witness to Reese’s community service. Dormant recalls that a neighborhood stray cat had been chased up a tree by their Siberian Husky.

“We had no idea how long the kitty had been stranded, but we were told about Cat-Stuck-in-Tree Rescue and Bob Reese. We contacted him, and he arrived ready to save that baby’s life. We couldn’t believe his patience and perseverance. He even brought canned cat food to make sure the little guy would eat before he left,” Dormant says.

Reese, who is retired from Mississippi State University, says he enjoys this community service and feels a great sense of satisfaction when he is rescuing someone’s pet.

“One of my favorite rescues was George, a little girl’s three-month-old kitten,” he said. Her mom explained how important George was to her daughter. The child had some developmental issues, and this fur baby had helped her come out of her shell. When that young girl asked me if I would save George, I promised and crossed my heart. You can’t break a promise like that. I tear up a little every time I think about that rescue.”