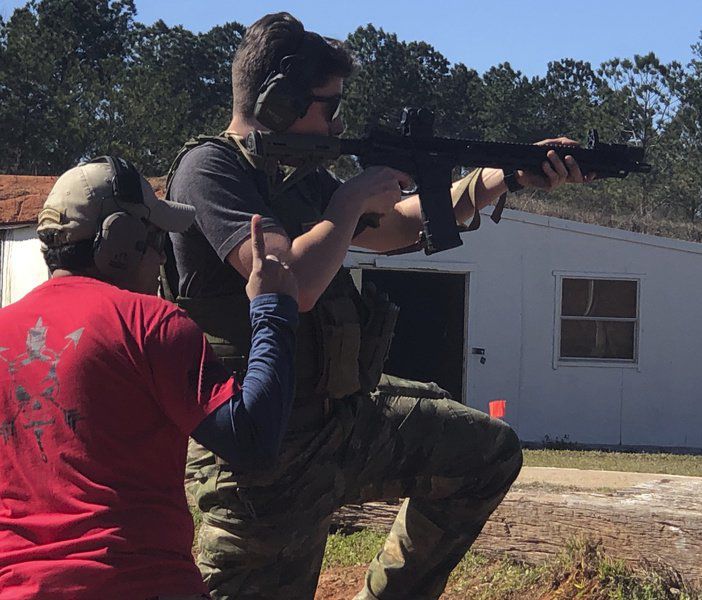 Sandro Pantano, 16, is graded as he takes aim at a target during the Tactical Games Sunday at the Meridian Public Training Facility. The Tactical Games tests physical endurance and marksmanship. It was the second consecutive year, Meridian hosted the competition. 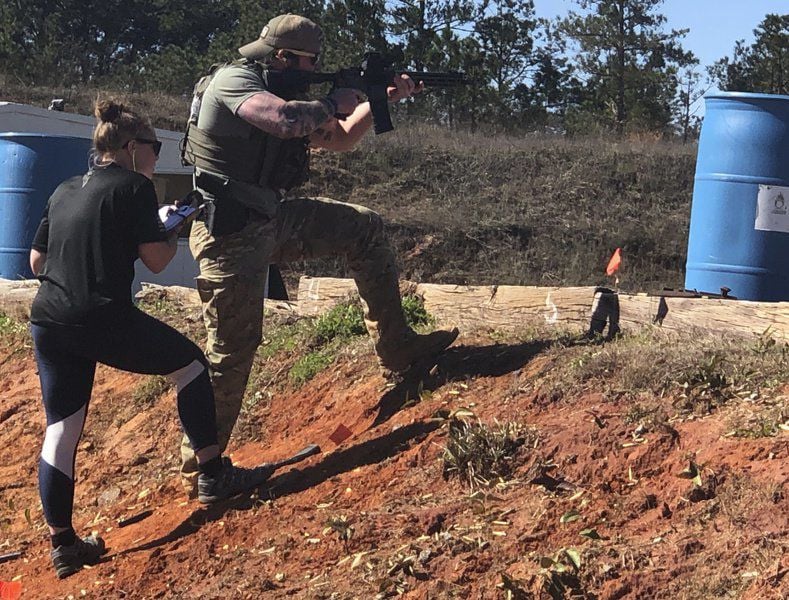 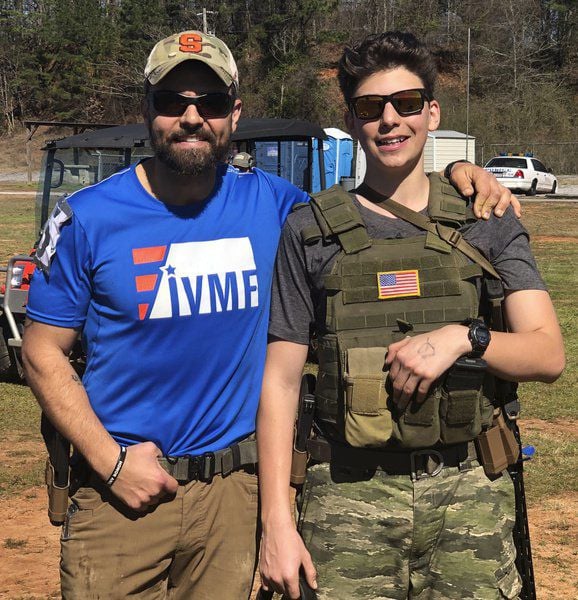 Ilario Pantano and his son Sandro Pantano traveled from North Carolina to Meridian over the weekend to participate in the Tactical Games. Illario competed as a master and Sandro as an intermediate. 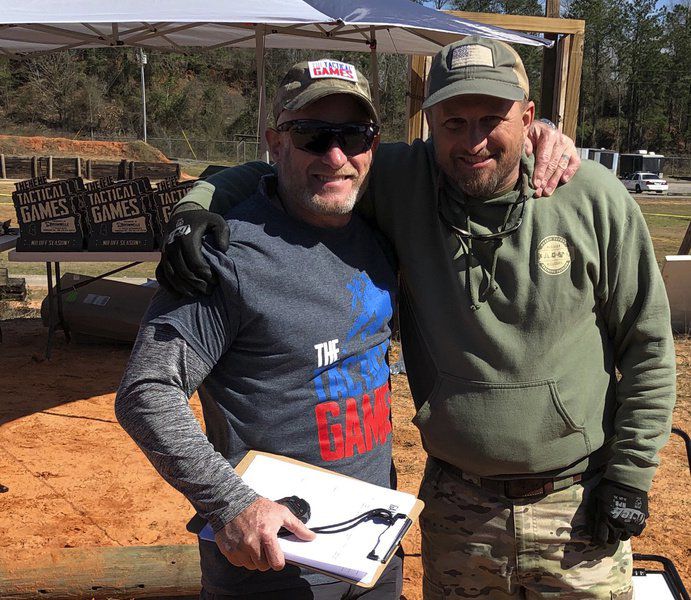 Tim Burke, left, founder and CEO of the games poses with Doug Stephens, director of the Meridian Public Training Facility.

Competitors from around the country traveled to Meridian over the weekend to test their physical capabilities and marksmanship in the the Tactical Games at the Meridian Public Training Facility.

It was the second consecutive year Meridian hosted the event.  The Tactical Games is a competition consisting of physical and gun accuracy challenges designed to simulate combat.

“The event blends marksmanship with physical fitness challenges,” said Doug Stephens, director of Public Safety for Meridian. “They want to take you from a standing constant heart rate, to well over 150 beats per minute and then challenge you to make an accurate shot with two different style weapons.”

Tim Burke is the founder and CEO of the competition. He designed the games to reflect the challenging and unpredictable nature of real world combat.

“I did 24 years in the Army and got some amazing experiences training with some of our military’s most elite units,” Burke said. “We try to keep the unknown and the unknowable. A lot of competitions put out the events prior so they [the competitors] can go practice those things. I do just the opposite.”

“They don’t know what they’re walking into when they show up, and that’s by purpose and design,” Burke said. “I just designed an event I thought I would have fun at and this is what we came up with.”

The style of the games is what sets it apart from traditional competitions of strength and endurance, according to Burke.

“Everything we do is something you would see in combat – picking up and carrying a heavy item, crawling through a tunnel, running up stairs, running over distance, those are all things you’re gonna do,” Burke said. “That mimics the physical stressors of combat.”

The Tactical Games has an open enrollment, so anyone can participate, not just those with a military background.

“Anybody can come as long as they can legally possess and handle firearms,” Burke said. “The only absolute non-negotiable requirement is that they have to be safe.”

The games are held at different sites around the country. Meridian’s competition had 57 contestants, of which seven were local competitors such as Brendan Newman.

“If nothing else you can learn more about yourself, that you can push yourself farther than you thought you could,” Newman said.

Ilario Pantano, of North Carolina, and his 16-year-old son Sandro, the youngest competitor, were among those traveling to the games.

“I’m competing as a master and he’s competing with the intermediary athletes,” Ilario Pantano said. “It’s been the most amazing experience. This is a well-produced and dramatic multi-day event.”

“It’s been great to test myself and see how I stack up,” Sandro Pantano. “It’s not everyday you can climb to the top of a tower like that, shoot over a pond and then crawl through some tunnels.”

Usually, the minimum age for competing is 18, but because of his experience and maturity level, Sandro was allowed to compete.

According to Burke, at the end of the day, the Tactical Games can suit many levels of performance.

“It depends on what you want to do,” Burke said. “If you want to come out and have a great experience, you’re fit enough. If you want to win, that’s a completely different story.“