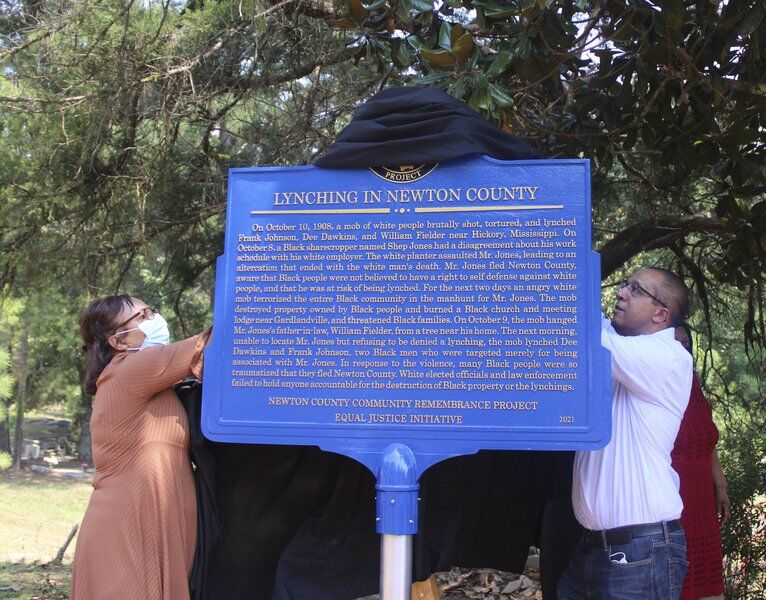 Gwendolyn Fielder Harris and  Darrell Fielder, descendants of William Fielder, unveil a historical marker at Good Hope Missionary Baptist Church in Hickory on Aug. 1. The marker memorializes William Fielder, Dee Dawkins and Frank Johnson, who were lynched in the area in 1908. 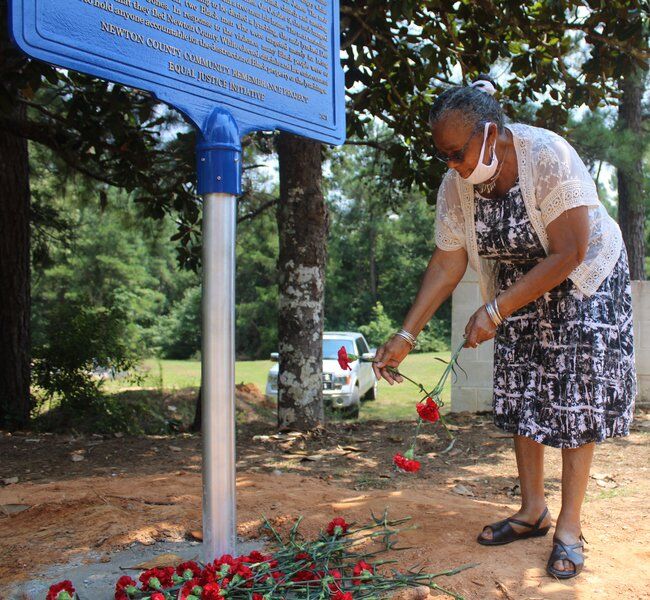 Joyce Salter Johnson leaves flowers in front of the marker. 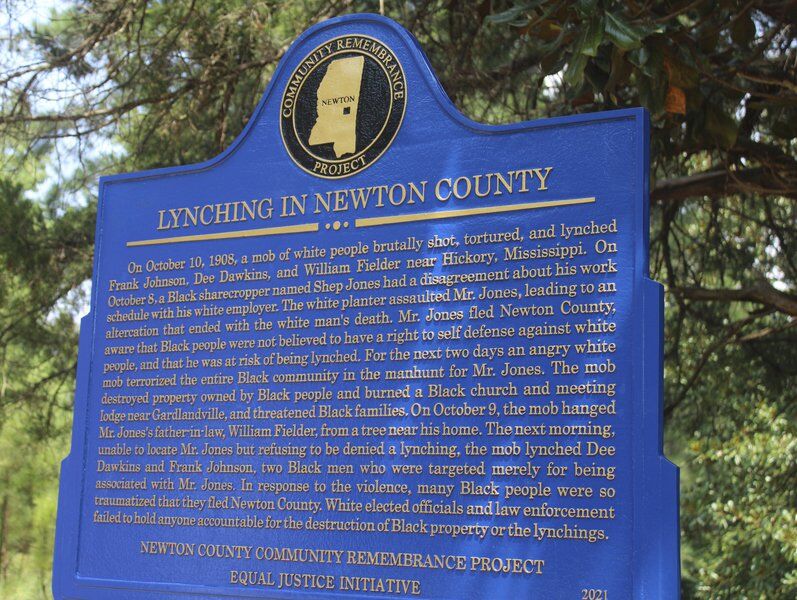 The historical marker in Hickory.

Even though the occasion had a somber atmosphere, Aug. 1 was joyous for Joyce Salter Johnson, one of several descendants of the three men who met to unveil a historical marker documenting a tragic event.

In the fall of 1908, a mob of white citizens brutally murdered Johnson, Dawkins and Fielder, who were Black.

“There's no better time than now to embrace the opportunity to confront the things faced by our community, and to capitalize on the present-day opportunity that was hard fought for, justly won and yet to be fully-realized,” said Ms. Johnson, a descendent of Frank Johnson. “We commit individually and collectively to memorializing this event. It's something that we had to do. “

The marker at Good Hope Missionary Baptist Church, part of the Community Remembrance Project, was made possible by the Equal Justice Initiative in Montgomery, Alabama.

During the summer of 2019, descendants of the men gathered near the church to collect jars of soil, which were sent to be displayed in The Legacy Museum, a part of the Equal Justice Initiative.  EJI also helps erect historical markers in public places where racial violence took place.

“We know it matters to honor their lives, to say their names and to know their history and their stories,” EJI project manager Trey Walk told the audience at Good Hope Missionary Baptist Church. “That is what these remembrance projects are about."

Salter Johnson said the journey to erect the marker started when she was researching her family history and learned about the 1908 lynchings. After starting the project in 2018, it took about three years for the families of Johnson, Dawkins and Fielder to complete the process, she said.

“We could no longer keep it some big secret,” she said.

The tragic events of Oct. 10, 1908 are documented in detail on the historical marker near the church. Dee Dawkins, Frank Johnson and William Fielder were shot, tortured and lynched in the Good Hope Community.

On Oct.  8, a Black sharecropper named Shep Jones had a disagreement with his white employer about his work schedule. The man assaulted Jones, leading to an altercation that resulted in the man's death.

Knowing that he was at risk of being lynched, Jones left Newton County. For two days, a white mob terrorized the Black community, destroying property and burning a church.

On Oct. 8, William Fielder, who was the father-in-law of Jones, was found hanging from a tree near his home. The next day, when the mob was unable to find Jones, they lynched  Dawkins and Johnson because they were associated with Jones.

The marker notes that white officials didn’t hold anyone accountable for the racially- motivated killings.

The men had prosperous lives before they were killed by the lynch mob, said Darrell Fielder, the great-great-grandson of William Fielder. The three men were friends, neighbors and valued members of the community, he said.

“They were family members who were brutally silenced almost 113 years ago," he said.

“The racial terror lynching was intended to send a broader message of white intimidation and to instil fear within the entire African-American community," said EJI project manager Elliot Spillers.

Spillers said the discussion of history shouldn't end with the erecting of markers. The monuments should create an experience where the community can reflect on important historical events, he said.

“As we memorialize and erect this marker, I want everyone to be reminded that this is not the end of this experience, but a continuation of the journey that started over two years ago,” he said.

Alice Dawkins, a descendant of Dee Dawkins, said that even though history can be painful, confronting a tragic past can help a community move forward.

“It’s so important that we tell our children and they tell their children about the history of their family,” she said.” This place right here – Good Hope Baptist Church – is where it all started, hundreds of years ago."

HICKORY — Before Emmitt Till, before James Chaney, Andrew Goodman and Michael Schwerner, th…

"Our place in history is clear, but having a marker to talk about how your family fits into that larger story is satisfying," she said. "It's that acknowledgment of our place in history and what we have to do with the larger history of the United States and how enslaved people made families, beauty and joy out of what they were faced with."