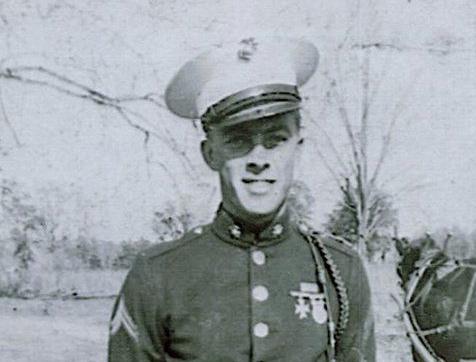 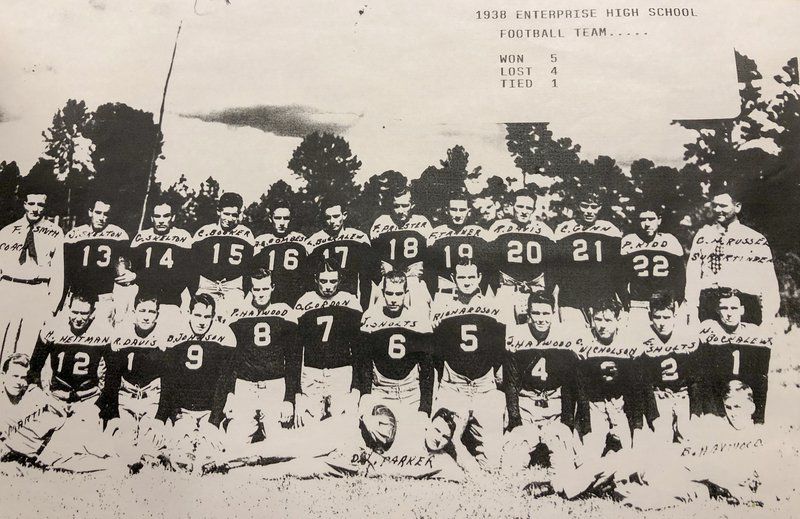 The 1938 Enterprise High School football team. Cpl. Haywood is on the bottom right on the ground with "B. Haywood" on his chest, below player in #1 jersey. 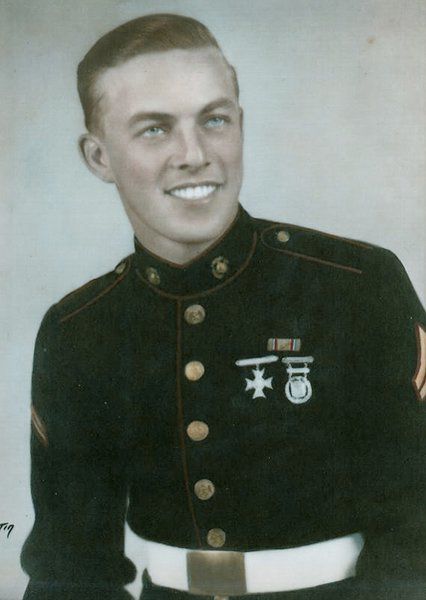 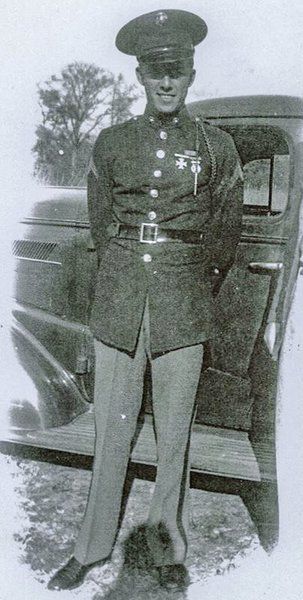 The aerial view of Betio, Tarawa Atoll, where Cpl. William Haywood (inset photo) of Enterprise died while fighting on Nov. 21, 1943. Cpl. Haywood’s relatives, representatives from the military, and community members will hold a memorial service on Aug. 31 for Cpl. Haywood at the Enterprise Cemetery.

Cpl. William Haywood filled his pockets as he prepared for battle: two letters from his Mississippi grandmother in one, two big red apples in the other.

The Enterprise High School football star had enlisted in the U.S. Marine Corps in 1940 and survived the attack on Pearl Harbor the following year.

Now, three years later, he was more than 6,000 miles from home, on a mission to build a beachhead with the 2nd Marines, 2nd Division.

Though he never returned to Enterprise, his memory has lived on in his hometown. His family and community will honor him next weekend with events planned Friday and Saturday.

The young Marine was one of 1,021 service members who were killed or later died from injuries on the Japanese-held speck of land in the Gilbert Islands of the Pacific, according to the Defense POW/MIA Accounting Agency (DPAA).

An obituary published on the front page of The Meridian Star on Jan. 9, 1944 quoted an earlier newspaper story with Cpl. Haywood’s explanation for the apples tucked in his uniform:

“‘I swiped ‘em from the ship’s galley, he explained, ‘because I figured I might get powerfully hungry over here.’”

Back home in Clarke County, details of his death began to reach his family.

This summer, Cpl. Haywood's family received a copy of his Individual Deceased Personnel File. It outlines the efforts made by the military to bring his body home.

“Records of the Department of the Navy indicate that the remains of the subject decedent were not recovered and the circumstances of death were such that recovery was improbable, if not impossible,” reads a 1949 memo by a Navy Liaison Officer. “No unknown remains can be associated with the subject decedent.”

Marines killed in action were initially buried where they died or in large trenches, according to the DPAA.

Nearly 76 years later, the whereabouts of Cpl. Haywood’s remains is still a mystery.

In 1946, the 604th Graves Registration Company consolidated remains from various sites into the Lone Palm Cemetery before they were moved to Hawaii for identification, according to the DPAA.

Remains that could not be identified were buried in the National Memorial Cemetery of the Pacific in Honolulu, then disinterred for analysis from 2016-2017.

Next Saturday, Cpl. Haywood’s relatives, representatives from the military, and community members will hold a memorial service for Haywood at the Enterprise Cemetery.

“I get really emotional when I think about it,” said Jim Stiles, a U.S. Air Force veteran who is married to Haywood’s half-cousin, Bobbie Bentley Stiles. “He deserves to be recognized, even though we don’t have his remains.”

His second cousin Larry Haywood of Aberdeen was born three years after Cpl. Haywood's death. He said he was told Cpl. Haywood was killed after he took off his helmet and was shot by a sniper on the beach.

At Enterprise High School, the fallen Marine's name has never been forgotten.

A few years after Cpl. Haywood’s death, his graduating class established the “Billy Haywood Memorial Award.” Since 1952, it has been presented to seniors with outstanding athletic ability, academics and character.

“I’m grateful for his sacrifice, for what he did, and what he means for the school. It’s a big deal for a kid to win that,” said Chance Mosley, a former school board member who has presented the award in recent years. “It’s the equivalent of our Heisman.”

On Friday night, the Enterprise School District will recognize all past recipients of the Billy Haywood Memorial Award at the high school football game.

Dozens of athletes connected to one another by the hometown hero who never returned will unite.

"It's a great honor for us," said Josh Perkins, superintendent of Enterprise School District. "If you don't bring up the history and celebrate the history, a lot of time it goes away. We want people to know who Billy Haywood was."

Cpl. Haywood is among 700 service personnel from Mississippi whose remains were never recovered, according to the DPAA.

U.S. Army Sgt. First Class Kristen Duus said his remains could still be on Tarawa, buried as an unknown, or in a lab.

In July, the non-profit foundation History Flight recovered more than 20 sets of remains from Tarawa and turned them over to DPAA, Duus said.

Forensic scientists will be working to identify them, a process that could take weeks to years, she said.

• Recipients of the Billy Haywood Memorial Award will be recognized at the Enterprise High School football game at 6:30 p.m. Friday, Aug. 30.

• The memorial service for Cpl. William Haywood is scheduled for 4 p.m. Saturday, Aug. 31 at Enterprise Cemetery.

Cpl. Haywood’s relatives have provided samples of their DNA to the Marine Corps, hopeful for a match.

If that day comes, his family would like Enterprise to be Cpl. Haywood's final resting place.

On Saturday, they will gather there, around a headstone.

Stiles will travel from Florida to read the eulogy.

“He needs to have proper honors because he’s a hero of World War II,” Stiles said. “If we don’t do it now, he’ll never be remembered, I’m afraid.”

ENTERPRISE — Under a tent in a tree-lined section of Enterprise Cemetery, an American flag was draped over a steel frame where a casket would be.