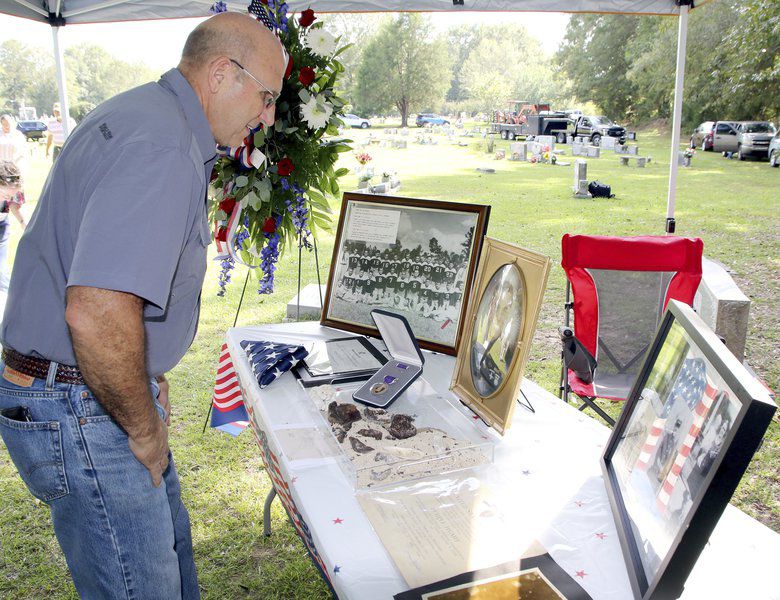 Bruce Smith, a recipient of the Billy Haywood Memorial Award, looks at memorabilia prior to a memorial service honoring Haywood at the Enterprise Cemetery. 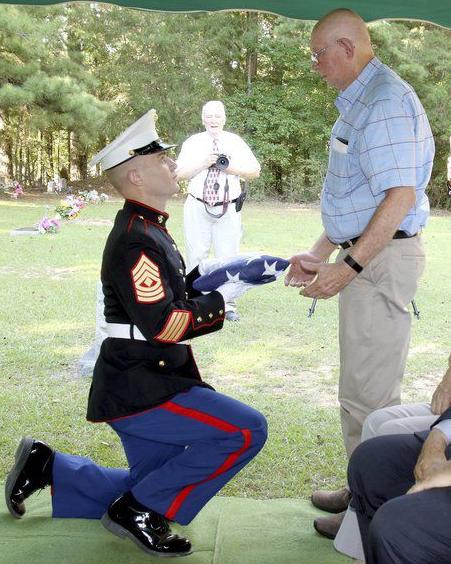 A U.S. Marine Honor Guard presents Larry Haywood, second cousin to Cpl. Billy Haywood with a flag during a ceremony honoring the Marine who lost his life on Nov. 21, 1943, the second day of the 76-hour Battle for Tarawa. 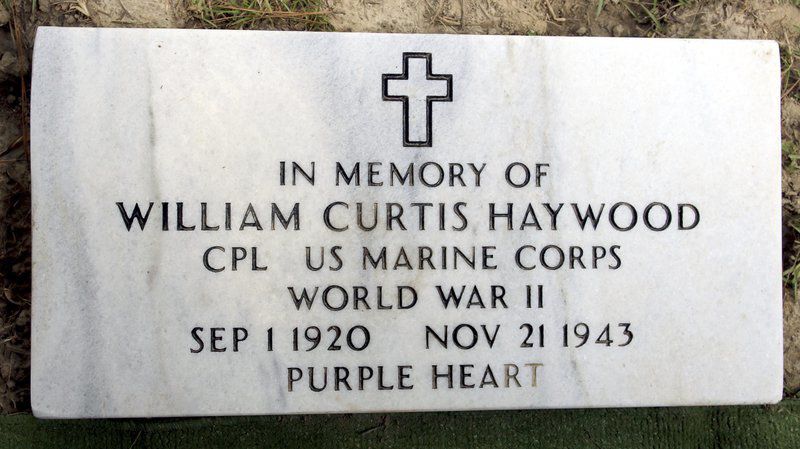 The gravestone for Cpl. Billy Haywood, who was killed on Nov. 21, 1943, the second day of the 76-hour Battle for Tarawa.

ENTERPRISE — Under a tent in a tree-lined section of Enterprise Cemetery, an American flag was draped over a steel frame where a casket would be.

Marine Cpl. William Haywood, who died nearly 76 years ago in World War II, was honored in his hometown Saturday.

Cpl. William Haywood filled his pockets as he prepared for battle: two letters from his Mis…

At least 50 people, including family, community members and representatives of the military gathered for a memorial service just a few miles from his childhood home.

The Enterprise High School football star fought in the Battle for Tarawa as part of the 2nd Marines, 2nd Division. His remains have never been identified.

“He was a good-natured young man. He was easy to get along with and was a man of great character,” he said.

“As we remember his memory, as we remember what he gave for our country, we’re ensuring that Billy is not left behind,” he said.

Bobbie Bentley Stiles said she was overwhelmed by the interest from the community.

“We thought we were having a small family get together to honor Billy and the next thing we knew everybody knew and was wanting to participate,” she said.

“He’s a real hero to our community,” he said.

At the Enterprise High School football game Friday night, the school district honored all of the recipients of the award.

Several of them attended the Saturday memorial service, including Seth Williams, who received the award this year.

“When I got it, it almost put me into tears,” Williams said. “It was really an honor to get it because of who the man was and what he just meant to everybody, and America now, for what he did.”

“I’m proud to be a part of it,” he said, his eyes brimming with tears. “When Enterprise High School is still giving that award, that tells you how well thought of he was.

Cpl. Haywood’s flag, Purple Heart medal, and sand from the beach where his division landed will be offered to the high school for a display there, Jim Stiles said.

“It’s important for us to remember our World War II veterans and our heroes,” he said. “I hope we can find him someday and actually put his remains here.”