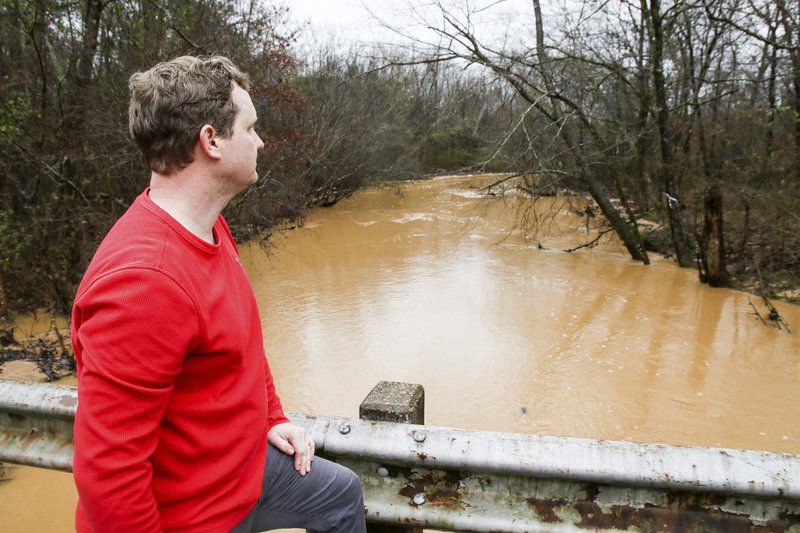 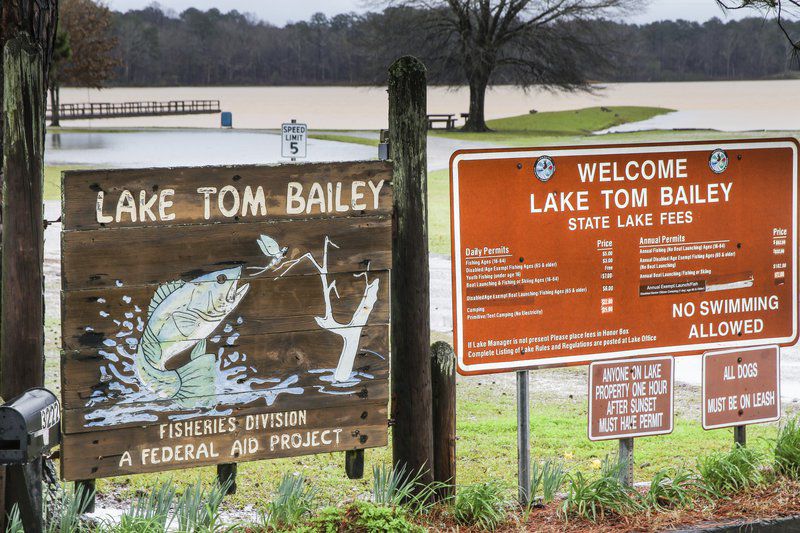 Lake Tom Bailey is downstream from the construction site of a solar farm in Toomsuba. The Mississippi Department of Environmental Quality conducted an inspection at the site "based on continuing concerns of the environmental impact" of the lake, records show.

TOOMSUBA — The inspection of a Lauderdale County solar farm site – conducted because of concerns about impacts to Lake Tom Bailey – revealed seven violations of state permit conditions, according to records from the Mississippi Department of Environmental Quality.

Three months ago, MDEQ staff visited the facility on Knox Road in Toomsuba, which is upstream from Lake Tom Bailey.

MDEQ records obtained by The Meridian Star through a public records request describe failures to maintain erosion and sediment controls and to conduct stormwater control inspections.

Inspectors found “sediment basins and silt fencing were lacking timely maintenance … rendering the storm water controls ineffective” and “eroded soils have discharged that will settle to form objectionable deposits in receiving waters,” according to the report. 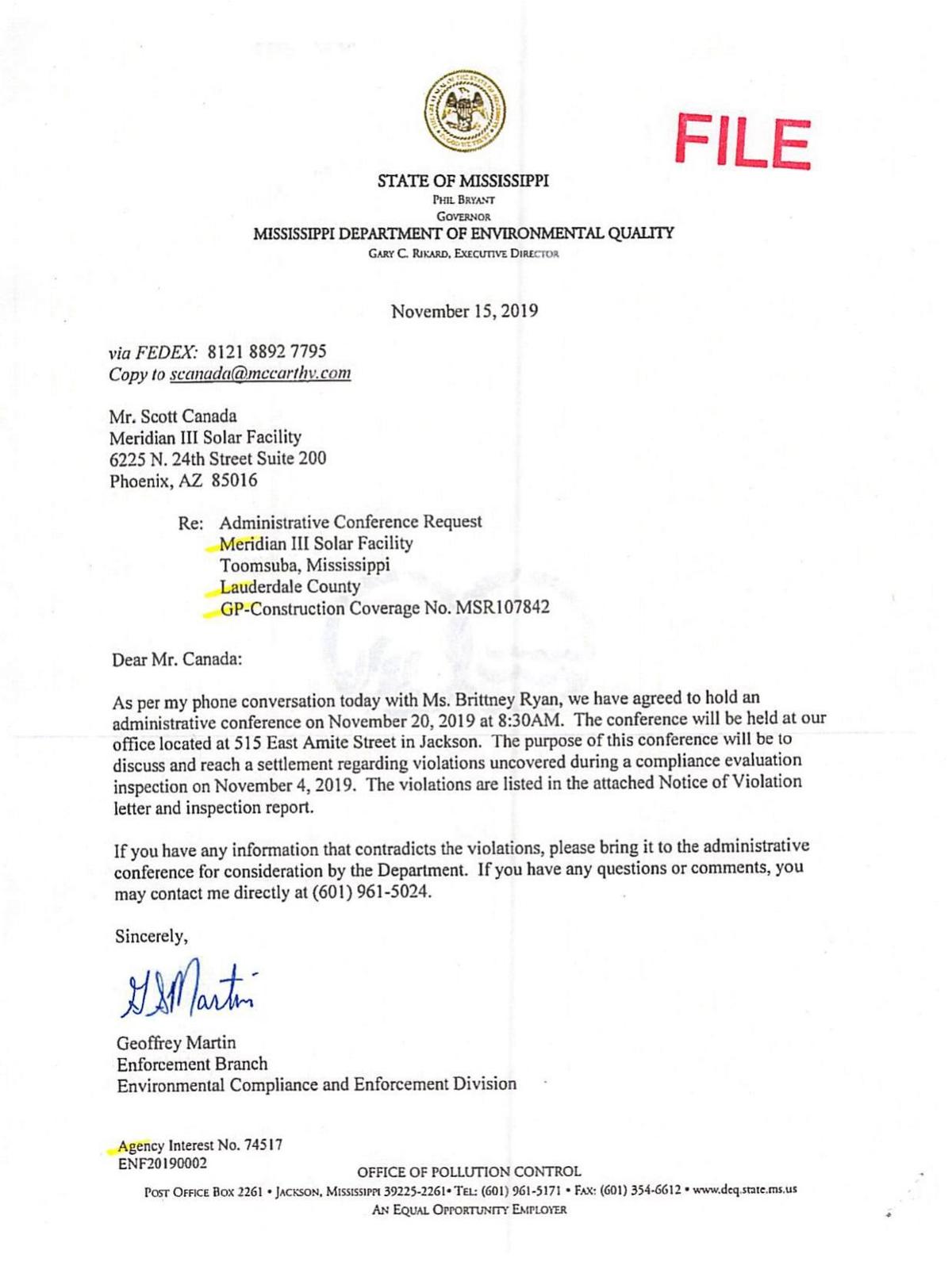 The document includes photos showing what MDEQ described as overwhelmed storm water controls, sediment discharge and a lack of vegetation.

“MDEQ questioned McCarthy staff on how often the basins have accumulated sediment removed,” the report shows. “They stated none of the 13 sediment basins in use on the project site have ever been maintained by removing sediment, as required by the (Stormwater Pollution Prevention Plan) and the General Permit.”

In a February 2019 news release, McCarthy announced it would be responsible for the design and construction of three solar projects in Lauderdale County, including the Knox Road facility. Nashville-based Silicon Ranch Corporation would fund the installations and own and operate the arrays.

“The projects will provide immediate economic benefits to the surrounding region, as well as economic and environmental benefits that present over time through critical tax revenues and the generation of clean, renewable energy,” the release states.

A Nov. 20 letter from Geoffrey Martin with MDEQ’s pollution control office indicates that following the inspection, representatives from the state agency and McCarthy met to discuss violations outlined in letters from June 2019 and November 2019.

During that meeting, a civil penalty was presented to McCarthy, the letter states. The amount of that penalty is unclear.

Six letters from McCarthy to MDEQ from Dec. 6, 2019 to Jan. 29, 2020 provide updates on the company’s efforts to address issues at the site, including designs for “additional erosion and sediment controls,” a “‘hot spot’ inspection list,” and the hiring of seven subcontractors and a third party to help with oversight.

In a Dec. 23 letter to MDEQ, David Bufo, a corporate environmental manager with McCarthy, requested a 50 percent reduction in penalties.

He detailed several factors that he said the company had encountered, including difficulty finding help and poor weather conditions.

“… A shortage of local contractors willing to support compliance efforts has forced us to bring in subcontractors from states including Indiana, Arizona and Georgia to manage on site issues,” Bufo wrote. “… Due to current site conditions, attributable to heavy rains and soil types, access to each of the existing basins and the site as a whole is extremely difficult.”

By late January, Bufo reported that the site had recently averaged more than 50 people per day focused on remediation efforts and that the company had spent more than $1 million on seeding, regrading and reseeding alone.

While McCarthy was working on the impacts to the Toomsuba Creek drainage area, Bufo noted, that “…A review of historical aerial maps confirms that this area, in particular Lake Tom Bailey and feeder creeks, have experienced turbidity impacts, unrelated to our project, in the past.”

Jeremy Collins, who has lived near the lake all his life and called it a “Toomsuba icon,” said children began to ask why the water was red during a church event last fall.

“We went and drove around and started finding in the creeks, where the creeks were also red, feeding the lake,” he said.

“We went and drove around and started finding in the creeks, where the creeks were also red, feeding the lake.”

His father-in-law contacted the Mississippi Department of Wildlife, Fisheries, and Parks and MDEQ, he said.

MDWFP began to receive complaints about “muddy” water at Lake Tom Bailey in October 2019, according to a Jan. 14 letter from Larry Pugh, the fisheries bureau chief of staff. 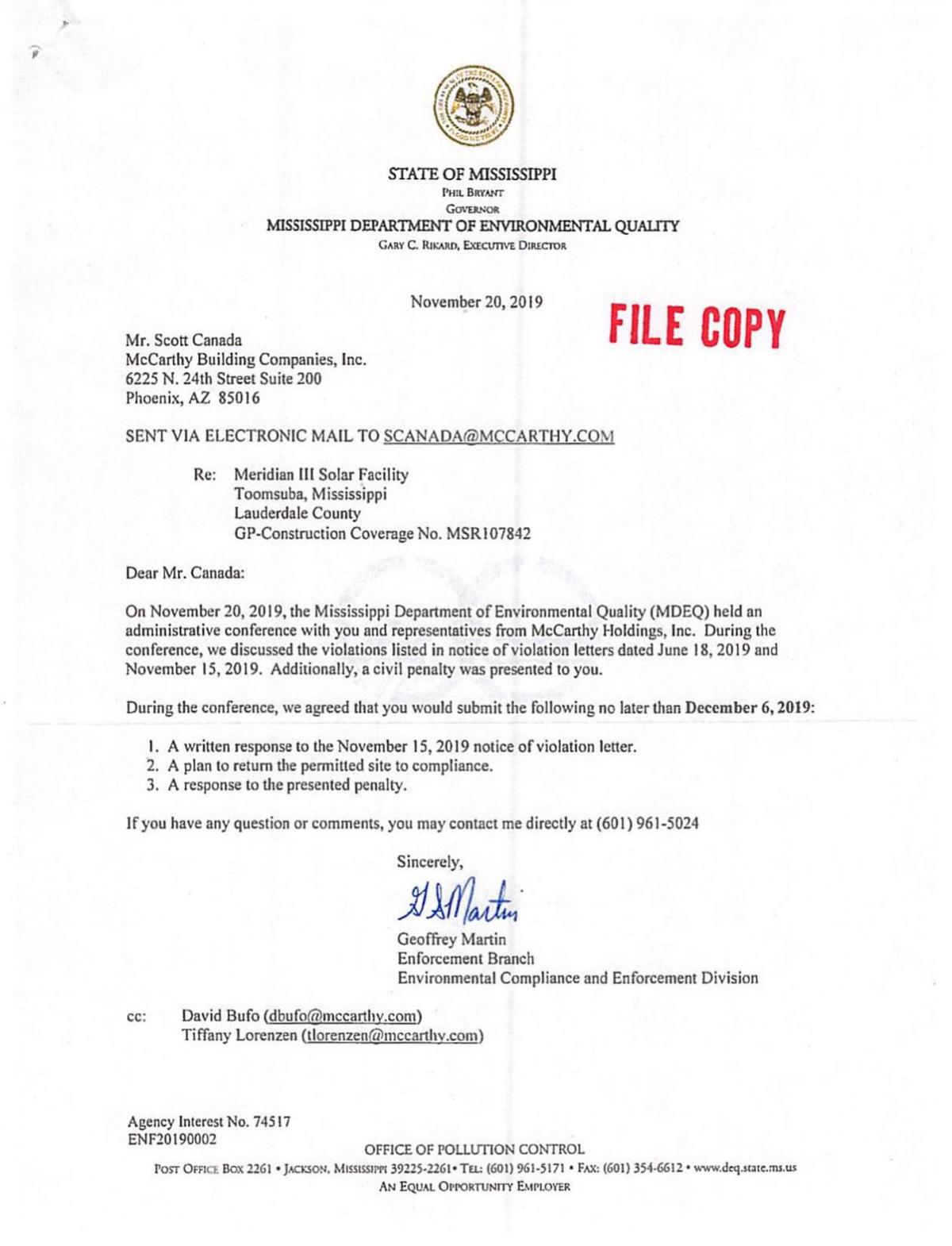 “Our concern is that muddy water can adversely affect fish growth and decrease public use,” Pugh wrote to MDEQ. “MDWFP cannot mediate the effect of the muddy water until the sediment load from the construction site is substantially reduced. We request MDEQ continue to use its regulatory authority to ensure McCarthy Building Companies comply with all conditions of their permit.”

In response to MDWFP, Chris Sanders, MDEQ’s pollution control office director, wrote that McCarthy “has committed to dedicating the resources necessary to bring the site into compliance…as quickly as possible.”

Projections indicated a return to compliance as early as the summer of 2020, Sanders wrote.

“However, given the winter season, wet weather and dormant growing conditions may impact the timeline, particularly with regards to establishment of permanent vegetation.”

“MDEQ is engaged in an ongoing formal enforcement action for noncompliance with the construction stormwater permit at the Meridian III Solar facility in Lauderdale County. Noncompliance has resulted in offsite impacts to state waters including Lake Tom Bailey. We continue working with the permittee to ensure the site is brought into compliance as soon as possible to minimize offsite impacts. MDEQ is requiring submittal of regular progress updates. In regards to a penalty, the enforcement action is ongoing including penalty discussions.”

McCarthy will remain on site to address outstanding issues, he said.

“As the ultimate owner of the Project, Silicon Ranch is both aware of the situation and working closely with our contractor McCarthy Building Companies to address it in consultation with MDEQ. We own and operate solar facilities both on-base at NAS Meridian and on land leased from the Lauderdale County School District and are committed to being active community members, strong corporate citizens, and responsible land stewards for decades to come. As we have sought since first investing in the community in 2017, Silicon Ranch is dedicated to working collaboratively with local leadership and other stakeholders to deliver positive outcomes for the entire region.”

McCarthy's spokesperson said this week that the issues at the Virginia site had been resolved.

As for the solar farm in Toomsuba, McCarthy Senior Vice President Scott Canada provided a statement to The Meridian Star:

“It’s our community. It’s our home, and we just want our things to be nice, like they’re supposed to be.”

“McCarthy Building Companies, Inc. is committed to delivering projects in an environmentally responsible way. The newly constructed Meridian Solar Project has been impacted by abnormally heavy rains in the region. McCarthy currently has a local workforce of between 35 and 60 people and approximately 30 pieces of equipment working seven days a week, weather permitting, to implement the project’s Stormwater Pollution Prevention Plan.

For Collins, McCarthy’s efforts are too little, too late.

“They should have been actively working towards preserving the condition of the environment before now,” he said. “It’s our community. It’s our home, and we just want our things to be nice, like they’re supposed to be.”