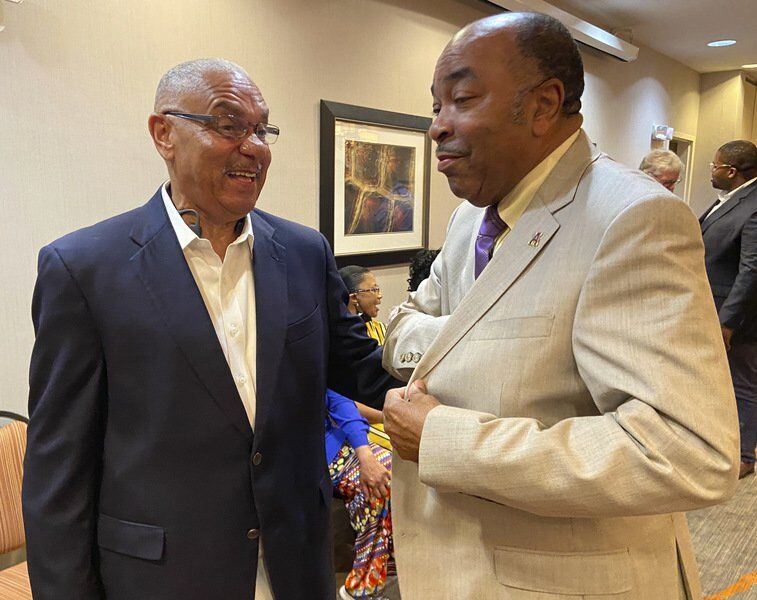 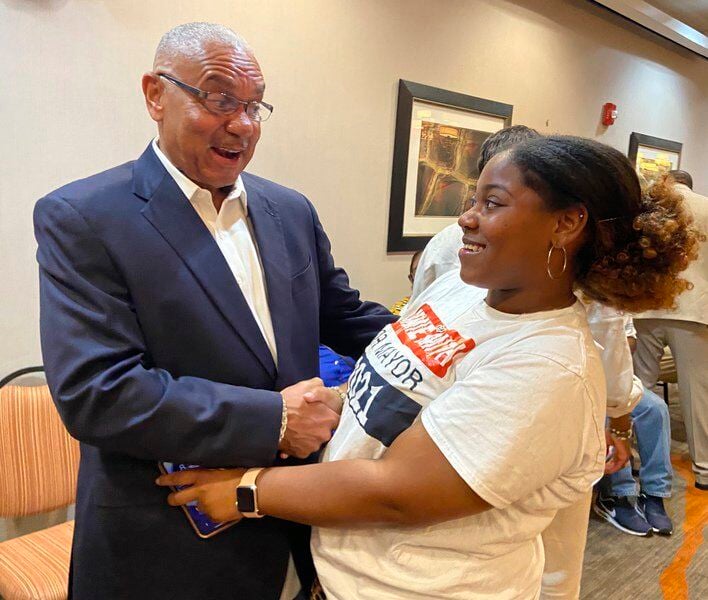 Jimmie Smith gets a hug from his granddaughter Jayla following the announcement of his win as Meridian mayor Tuesday night.

Democrat Jimmie Smith will be the next mayor of Meridian after winning the general election on Tuesday by a substantial lead.

“It’s a good feeling,” Smith told The Meridian Star following the win. “I’m ready to go to work for the citizens of Meridian and do the best I can do for them.”

Smith, a former Lauderdale County supervisor, garnered 3,396 votes, or 62.4% of the vote, according to unofficial results released the city's clerk's office.

What should Jimmie Smith’s main priority be when he takes office as mayor of Meridian on July 1?

In April, Smith defeated incumbent Mayor Percy Bland in the runoff for the Democratic primary. This is not Smith’s first mayoral race — he had an unsuccessful bid for mayor in 2005.

Public safety, city streets, economic development and the school system are areas that Smith says he will focus on as mayor. Smith has said that he would employ a full-time engineer in his mayoral administration who would help monitor and improve city infrastructure.

Smith has also said that he would, as mayor, encourage the police chief to ensure police vehicles are patrolling city streets.

He said Tuesday that one of his first tasks will be evaluating the city's department heads. Those appointed leaders supervise the police department, public works, fire department, community development, public safety and parks and recreation divisions.

Smith will also need to nominate a new chief administrative officer to succeed Eddie Kelly, who resigned in early May. Public Safety Director Doug Stephens is serving as acting CAO.

Smith said he intends “to look at every department head and see what they bring to the table."

Born in Chicago, Smith moved to Meridian as a teenager and has spent all of his adult life in the Queen City. When he first arrived in Meridian, he worked at Anderson Regional Medical Center and Rush Health Systems.

He then joined Meridian Police Department, where he had stints in the patrol division, the detective division and the SWAT Team. He then served as a Lauderdale County supervisor for 20 years. Smith went on to work for a bonding company called Government Consultants before retiring a few years ago.

Smith and his family and friends learned the election results at a watch party Tuesday evening at the Holiday Inn in Meridian. Belinda Davis, who attended the party, has worked with Smith’s wife for many years.

She described him as “kind, approachable, considerate.”

“And now, as he has decided to run for mayor, when he says that the city needs some attention, I totally agree,” Davis said in an interview before the election results were released.

She hopes that, as mayor, Smith will address the large amount of debris caused by the severe storm that struck Meridian in May. She also hopes that Smith will bring more affordable housing to Meridian.

“That in itself is fantastic — for our family to be here and enjoy this moment,” Smith said as he surveyed the room.