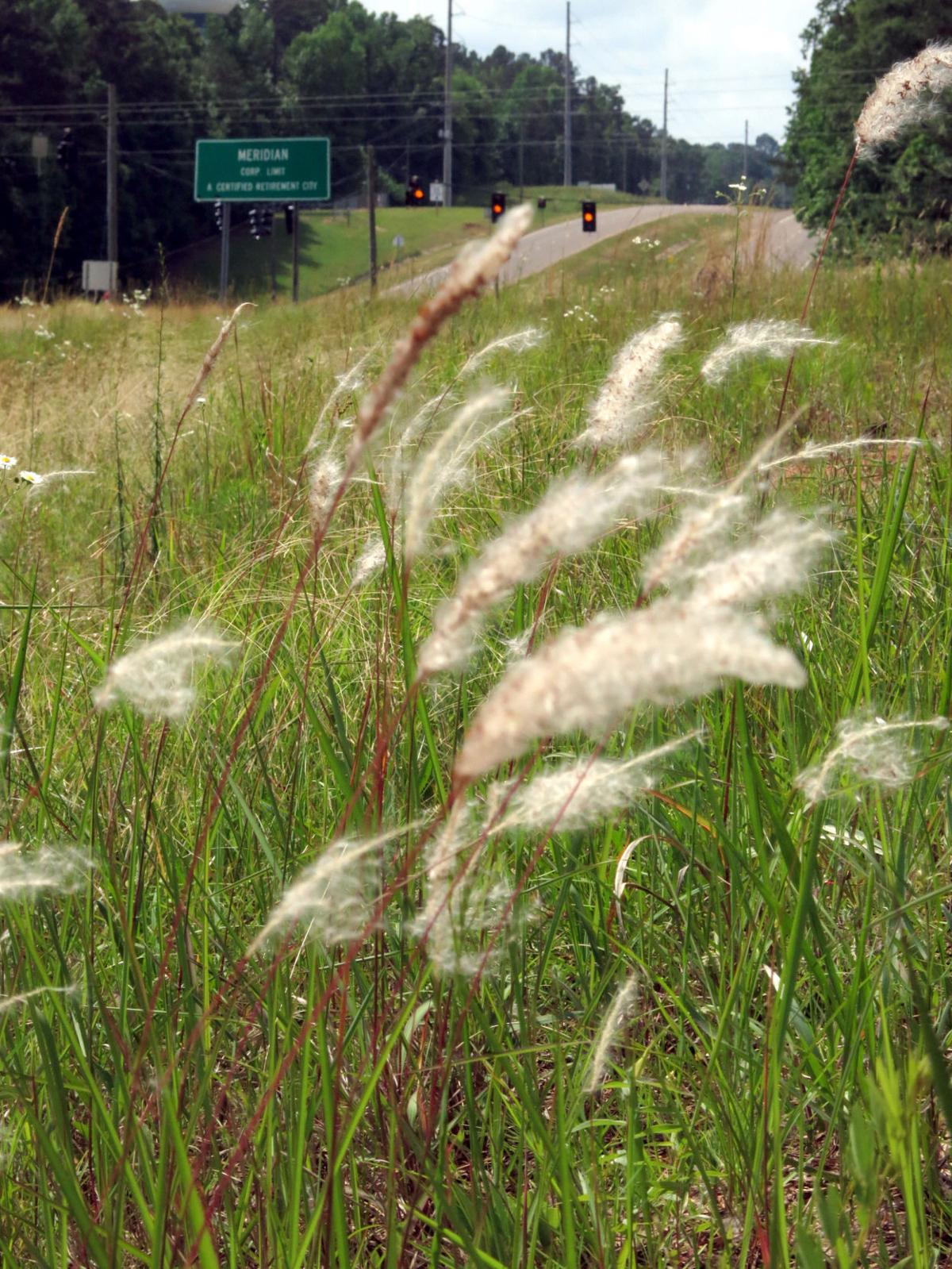 Cogongrass blooms along a road just outside the Meridian city limits. This invasive species chokes out other grasses. Cogongrass seeds are spread by wind and by cutting and the roots can survive being cut by a bush hog. 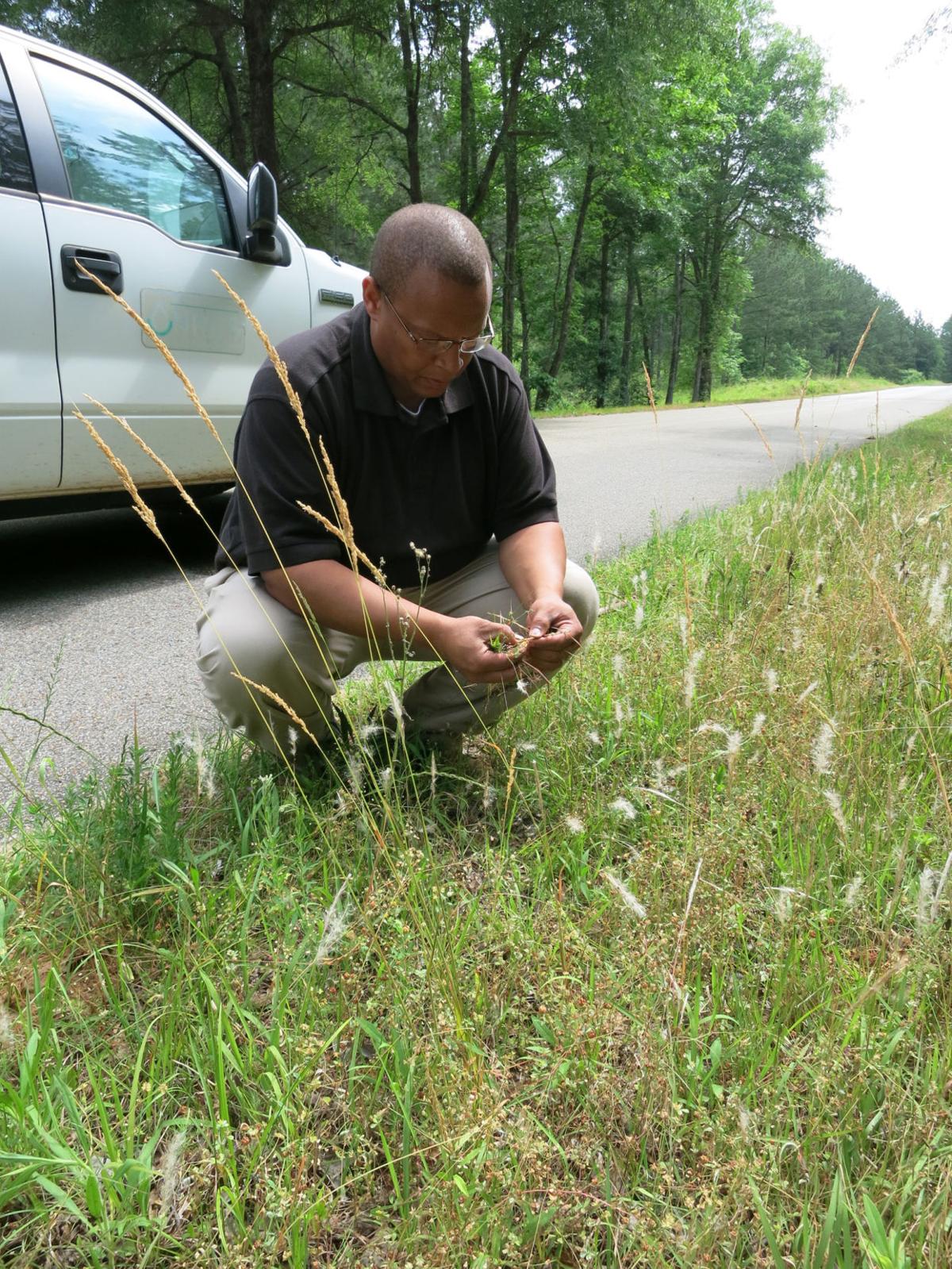 Kelvin Jackson, district conservationist for the Lauderdale County Natural Resources Conservation Services, examines the root system of a patch of cogongrass. The patch was tagged and will be sprayed.

Cogongrass blooms along a road just outside the Meridian city limits. This invasive species chokes out other grasses. Cogongrass seeds are spread by wind and by cutting and the roots can survive being cut by a bush hog.

Kelvin Jackson, district conservationist for the Lauderdale County Natural Resources Conservation Services, examines the root system of a patch of cogongrass. The patch was tagged and will be sprayed.

Meridian and Lauderdale County are showing signs of being invaded by a species of plant that eventually chokes out all the other plants around it.

Cogongrass is an aggressive perennial grass that came into the country through the port of Mobile in the 1900s. Originally it was used as packing material for imported goods but later was intentionally introduced in Florida for erosion control.

Kelvin Jackson, District Conservationist with Lauderdale County Natural Resources Conservation Services, says "One of the dangers of cogongrass is it's a fire hazard. Being a fire hazard there's a potential for loss of property and even life. The fire burns extremely hot."

Jackson said the spread of the grass is a growing problem in Lauderdale County. The agency is working with extension offices to inform landowners of the problem and offer them help in identifying and controlling the invasive grass.

The agency has also worked with the city of Meridian and Lauderdale County to address the problem.

"Over the past month, we've had the opportunity to meet with city employees, as well as county employees that are out maintaining the right of ways to help to identify it," Jackson said. "They are also working on a plan of action after they have identified it — working to be able to control it, and spray it to control the spread of it."

Jackson said cocongrass should not be cut with a bush hog as that only helps the grass to spread. Multiple applications of chemicals are needed to control the grass, which has a sturdy root system. Jackson said he has seen a ring of grass spring up a year later around a treated area.

Cogongrass has no nutritional value for animals.

"Animals don't like it. It has a high amount of silicate," Jackson said. "For an animal it's like eating sandpaper. People say goats eat anything, and I've seen goats eat around cogongrass."

Cogongrass can be identified by it's silvery-white cylindrical seed head that is 2 to 8 inches in length with white fluffy dandelion-like seeds. It is in bloom now with blossoms first appearing in late March and lasting until mid June. The blades of the plant are up to six feet long, about 1 inch wide, whitish with a prominent midrib that is off-center and a yellowish-green color that turns to a reddish cast in fall.

Lauderdale County Board of Supervisors President Kyle Rutledge arranged a meeting with county employees and the NSRS to help with identification and control methods for cogongrass.

"Mr. Jeff Davis, who is over the Cattleman's Association, told me about what a tough species this is to get rid of," Rutledge said. "So I started doing some research on it and talking to Kelvin and started trying to locate it."

Rutledge said he is on constant watch for the grass in his district and informs road crews when he spots it so it can be sprayed.

Rutledge hopes landowners will learn how to spot and treat the grass. It is important that they do not mow it, he said.  Rutledge said if anyone spots cogongrass in the right of way on county roads they can contact the road department or Rutledge's office to make sure it gets put on the list to be sprayed.

Jackson said it will take everyone working together to control the invasive grass, including agencies at the local, state and federal levels.

For more information about identifying cogongrass or about means of eliminating it, contact the National Resources Conservation Service or the Mississippi State University Extension Service.