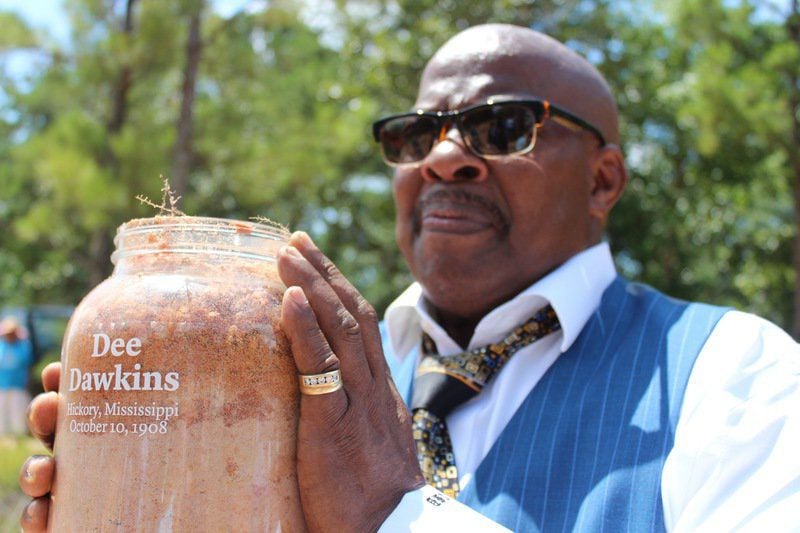 The Rev. Claud Dawkins holds a jar of dirt at the site where his ancestor Dee Dawkins was lynched in Hickory in Newton County in 1908. The jar and two others from the site will be displayed at the National Memorial for Peace and Justice in Montgomery, Alabama. 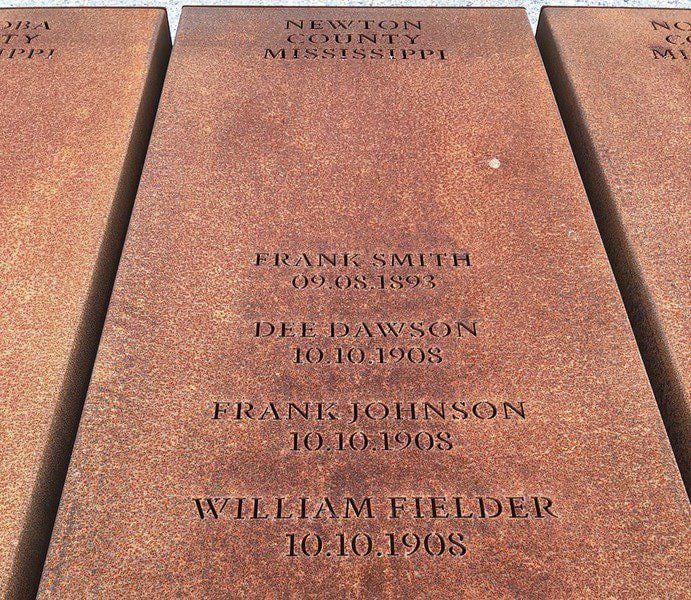 A marker noting victims of lynching in Newton County is displayed at the Legacy Museum in Montgomery, Alabama. 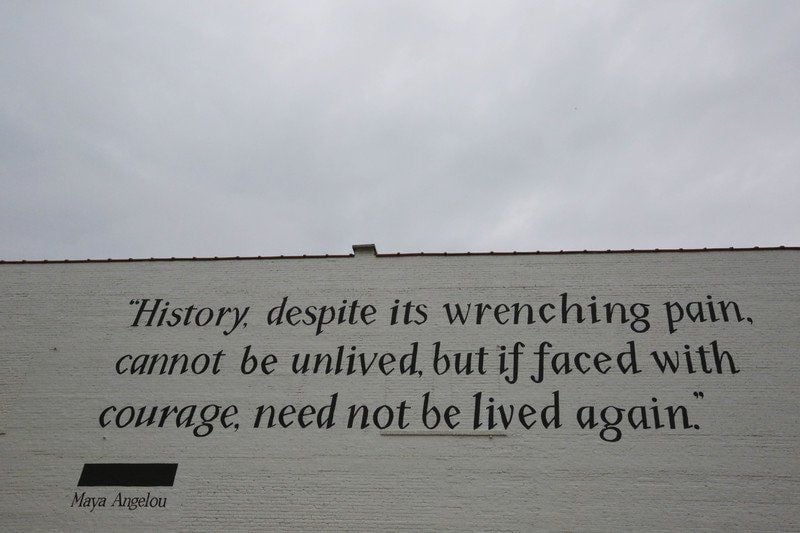 A quote by Maya Angelou is on the outside of the Justice and the Legacy Museum in  Montgomery, Alabama. Dozens of Mississippi lynching victims, including Frank Johnson, Dee Dawkins and William Fielder of Hickory, are memorialized in the museum. 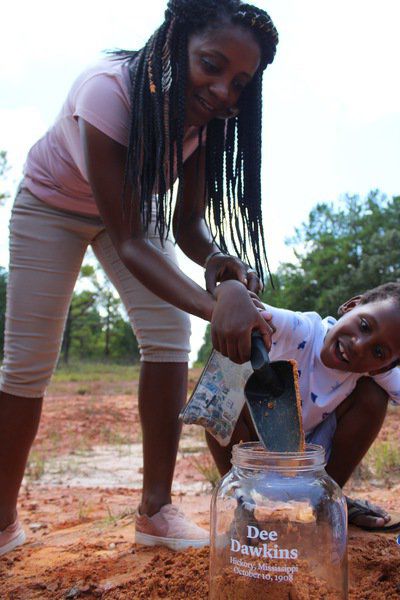 Brandi Alexander and Coby Fielder fill a jar with soil at the site where Dee Dawkins was lynched in Hickory in Newton County in 1908. 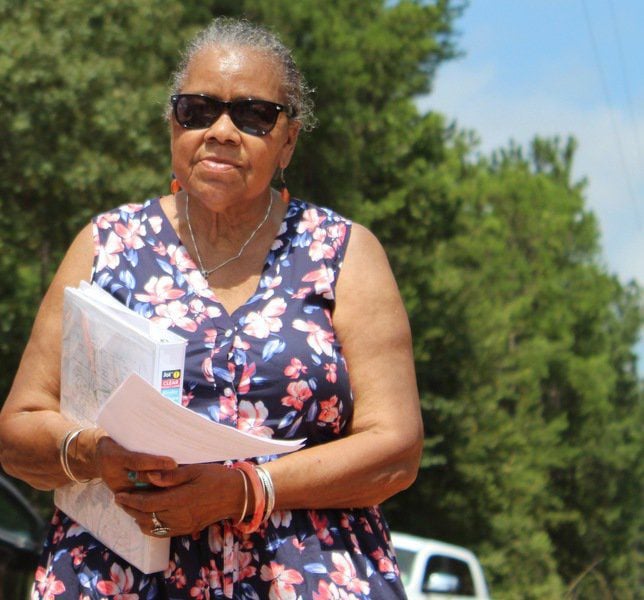 Joyce Salter Johnson listens during the Community Remembrance Project in Hickory on Aug. 4 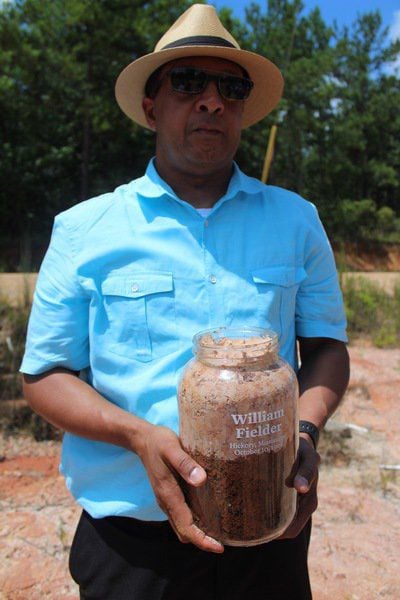 Darrell Fielder holds a  jar of dirt at the site where his ancestor William Fielder was lynched in Hickory in Newton County in 1908.

The Rev. Claud Dawkins holds a jar of dirt at the site where his ancestor Dee Dawkins was lynched in Hickory in Newton County in 1908. The jar and two others from the site will be displayed at the National Memorial for Peace and Justice in Montgomery, Alabama.

A quote by Maya Angelou is on the outside of the Justice and the Legacy Museum in  Montgomery, Alabama. Dozens of Mississippi lynching victims, including Frank Johnson, Dee Dawkins and William Fielder of Hickory, are memorialized in the museum.

HICKORY — Before Emmitt Till, before James Chaney, Andrew Goodman and Michael Schwerner, there were Frank Johnson, Dee Dawkins and William Fielder.

The year was 1908 near the Good Hope settlement in rural Newton County. Late that fall, on Oct. 8, a mob of white citizens brutally murdered Johnson, Dawkins and Fielder, who were black.

Their descendants gathered on a recent sweltering afternoon to reflect on the story, while seeking reconciliation and healing.

“There is intense excitement throughout the community south of here, where A. J. Wall was killed by a Negro named Shep Jones, and it seems almost as if a race war were threatened,” The Newton Record newspaper reported in 1908. “It is reported that a Negro church and a large meeting hall have been burned there by infuriated citizens, who think Wall’s murderer was shielded by members of his race and aided to escape.”

Dawkins’ body was found in the road, near his home south of Hickory, with five bullet holes in it, the paper reported.

“Fielder, the Negro who was last seen with him, has disappeared, and it is reported that he also has been put to death,” the report continues.

“The third lynching victim was named Frank Johnson,” the report said. “Johnson was said to had been killed because he was a friend of Shep Jones.”

“We were in the throes of Jim Crow segregation, voter disenfranchisement and the terror from the Ku Klux Klan,” said Darrell Fielder, a descendant of William Fielder who gathered on Aug. 3 with other relatives of the lynching victims near the site of the atrocity.

“Black people that have lived in South know the dread of being caught out alone upon the streets in white neighborhoods after the sun had set,” Fielder said. "The color of a black person's skins make him easy recognizable, makes him suspect, converts him into a  defenseless target."

Darrell Fielder and other family members reflected on the tragedy and memorialized their  relatives by collecting dirt from the site. The red Mississippi clay was shoveled into large glass bottles, which were sent to Montgomery, Alabama to be displayed with others at the National Memorial for Peace and Justice as part of the Equal Justice Initiative's Community Remembrance Project.

The center, which opened in the spring of 2018, is a national memorial commemorating the victims of lynching in the United States.

'No one wants to be reminded of it'

Joyce Salter Johnson, a descendant of Frank Johnson who grew up in the Good Hope community, helped initiate the effort to remember the three men.

“I've always been curious about my ancestry," said Joyce Johnson, who moved away to Wisconsin in the 1950s, but has often returned to her hometown. "That has been going on for as long as I can remember. Probably from the age of 12 on, I would ask those questions."

With help from the Newton County Historical and Genealogical Society, Joyce Salter Johnson learned about the lynchings, and began to dedicate her time to documenting her family's  history. At 80, she wanted her younger relatives to know about the horrors their ancestors suffered.

“No one wants to be reminded of it, but to move forward we have to be aware of it,” she said.

Joyce Salter Johnson said that while people can read about the Civil Rights Movement and slavery in history books, the lynchings have been forgotten over time.

"These lynchings have been a hidden factor in the history of the South and other places," she said. "It's not something anyone wants to be proud of. But we have come to terms with it ... we need to bring it up to help to heal ... a corporate healing, a local healing and a family healing.”

Reports of lynching in East Mississippi between 1877-1950

Joyce Salter Johnson's niece, Brandi Alexander, traveled from Washington, DC, to participate in the soil collection ceremony. She knew she was related to the Frank Johnson family, but through research, found she was also connected to the Fielder family.

Standing on the site, Alexander said she felt a deep connection to her past.

“It was even more powerful because my family was directly impacted by it,” Alexander said.“It is really powerful and surreal (to be) on the land where it took place."

“It makes me want to do something about it more so than commemorating it, figuring out how I can really translate that into action,” she said.

Alexander compared today's political climate of mass incarceration, unjust economic systems and other forms of disenfranchisement to the struggles her ancestors faced, saying that the fight for racial equality isn't over.

But, she encouraged the younger generation to reflect on the past, even when it's difficult.

“It just highlights the importance of unity and remembering our past, so we don’t repeat it,” she said.

Joyce Salter Johnson hopes that, a year from now, the families will gather again in Hickory to unveil a historical marker at the lynching site, so that when anyone visits, they will know that Frank Johnson, William Fielder and Dee Dawkins did not die in vain.

OUR VIEW: Confronting a tragic past necessary to move forward

HICKORY – On a sweltering summer day, descendants of Dee Dawkins, William Fielder and Frank Johnson gathered at a tiny church in rural Newton…