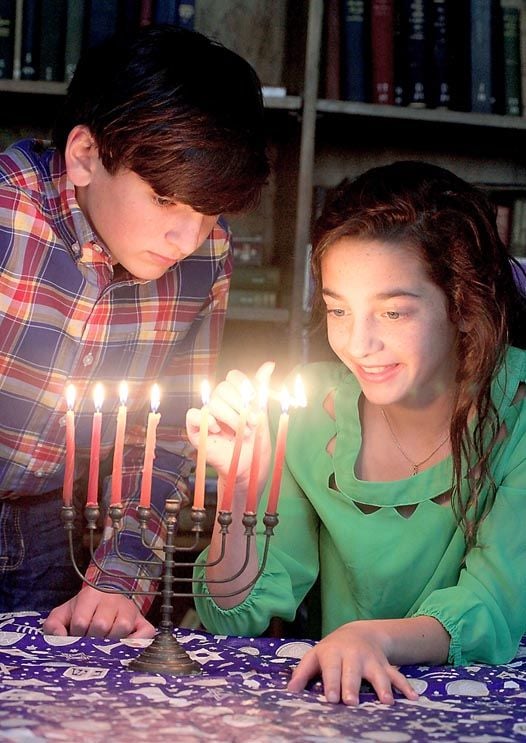 Jake Davidson, left, and his sister Wyatt light a hanukkiyah in celebration of Hanukkah 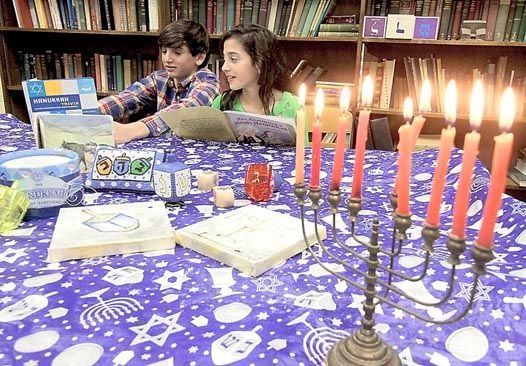 Jake Davidson, and his sister Wyatt enjoy reading books as they celebrate Hanukkah.

Jake Davidson, left, and his sister Wyatt light a hanukkiyah in celebration of Hanukkah

Jake Davidson, and his sister Wyatt enjoy reading books as they celebrate Hanukkah.

At sundown Tuesday, Sheryl Davidson and her family will join millions of Jews around the world as they light the first of eight candles on the hanukkiyah to celebrate Hanukkah.

Hanukkah – sometimes transliterated Chanukkah – is a Jewish holiday celebrated eight days and nights. According to Jewish law, it is one of the less important Jewish holidays. However, Haunukkah has become more popular in modern practice because of its proximity to Christmas – it starts on the 25th of the Jewish month of Kislev, which coincides with late November-late December on the secular calendar.

"Rededication is what the word 'hanukkah' means, referring to the rededication of the temple in Jerusalem following the Jewish victory over the Syrian-Greeks," Davidson said.

In 168 B.C.E. the Jewish Temple was seized by Syrian-Greek soldiers and dedicated to the worship of the god Zeus. This upset the Jewish people, but many were afraid to fight back for fear of reprisals. Then in 167 B.C.E. the Syrian-Greek emperor Antiochus made the observance of Judaism an offense punishable by death. He also ordered all Jews to worship Greek gods.

Jewish resistance began in the village of Modiin, near Jerusalem. Greek soldiers forcibly gathered the Jewish villages and told them to bow down to an idol, then eat the flesh of a pig – both practices that are forbidden to Jews. A Greek officer ordered Mattathias, a High Priest, to acquiesce to their demands, but Mattathias refused. When another villager stepped forward and offered to cooperate on Mattathias' behalf, the High Priest became outraged. He drew his sword and killed the villager, then turned on the Greek officer and killed him too. His five sons and the other villagers then attacked the remaining soldiers, killing all of them.

Mattathias and his family went into hiding in the mountains, where other Jews wishing to fight against the Greeks joined them. Eventually they succeeded in retaking their land from the Greeks. These rebels became known as the Maccabees, or Hasmoneans.

Once the Maccabees had regained control they returned to the Temple in Jerusalem. By this time it had been spiritually defiled by being used for the worship of foreign gods and also by practices such as sacrificing swine. Jewish troops were determined to purify the Temple by burning ritual oil in the Temple’s menorah for eight days. But to their dismay, they discovered that there was only one day's worth of oil left in the Temple. They lit the menorah anyway and to their surprise the small amount of oil lasted the full eight days.

This is the miracle of the Hanukkah oil that is celebrated every year when Jews light a special menorah known as a hanukkiyah for eight days. One candle is lit on the first night of Hanukkah, two on the second, and so on, until eight candles are lit.

While every community has its unique Hanukkah traditions, some are almost universally practiced:

• Lighting the hanukkiyah: Every year it is customary to commemorate the miracle of the Hanukkah oil by lighting candles on a hanukkiyah. The hanukkiyah is lit every night for eight nights.

"Most people call it a 'menorah,' which could be a six- or seven-branched candelabra. The hanukkiyah is specifically a nine-branched menorah representing each of the eight nights you light candles, and the additional helper candle is the ninth, which is called the 'shamash,'" Davidson explained.

• Spinning the dreidel: A popular Hanukkah game is spinning the dreidel, which is a four-sided top with Hebrew letters written on each side. Davidson said she had learned where the tradition came from only in recent years.

"During the time the Syrian-Greek emperor Antiochus was trying to mandate a non-Jewish policy, when Jews were gathering together to study the torah and to discuss religious matters, if a soldier walked by all of a sudden these guys would break out these little tops and start spinning them," she said.

• Eating fried foods: Because Hanukkah celebrates the miracle of oil, it is traditional to eat fried foods such as latkes and sufganiyot during the holiday. Latkes are pancakes made out of potatoes and onions, which are fried in oil and then served with applesauce. Sufganiyot (singular: sufganiyah) are jelly-filled donuts that are fried and sometimes dusted with confectioners’ sugar before eating.

Gift-giving has become a modern-day tradition of Hanukkah, however Davidson said it has nothing to do with the story.

"That came about because it was observed in December – so close to Christmas and so many Jewish kids had, and have non-Jewish friends who are celebrating Christmas with gifts. The next thing you know, it gets to be a gift-giving holiday given the season," she said. "There is no gift involved in Hanukkah, except the miracle of winning the battle and the miracle of the cruz of oil lasting so long."

As a child, Davidson viewed Hanukkah in a different light.

"When you're a kid, you think about the gifts, eating potato latkes and lighting candles. And, of course, you know the Hanukkah story," she said.

However, as an adult, she has realized a deeper meaning for the Jewish holiday.

"It's really so much more than that. As an adult, I feel the Hanukkah miracle is one thing about the cruz of oil that lasted eight nights when normally it would have barely lasted a single night. The bigger picture is that it's a story that teaches tolerance.

"One of the biggest parts of the story that you hear of Hanukkah is how the Maccabee brothers – there were eight of them – said to the Greeks, 'Forget this! We're not going to give up our religion. We've been fine with the Greek culture and the Assyrians up until now, and all of a sudden you're going to tell us we can't study the Torah? We can't celebrate the Sabbath – on Friday nights and Saturdays until sundown we can't pray in our synagogue? That's ridiculous!'" Davidson said.

"These guys got excited about standing up for the cause of the right to religious freedom. These farmers with their crude farming instruments went up against heavily armed, previously quite successful troops. They fought and fought and the troops backed off and surrendered. That's the miracle of Hanukkah. And what Jews have and should continue take from that is to learn about interfaith tolerance. There no reason for anyone to impose their religious beliefs on someone who believes differently. Instead, it should be a matter of 'Let's break bread. I really respect where you come from and how you believe. Please respect where I come from and how I believe.'"

For Davidson's family – which includes her husband, Jay, and their children, Jake and Wyatt – Hanukkah is about coming together.

"We all come together, we light candles every night of Hanukkah and we do celebrate by giving gifts," she said. "My in-laws and other family members in town come over several of the nights and we light the candles. Or, if we go out of town where I'm from, we light candles with family there."

"We used to have a Hanukkah party, where all of our kids' friends would come and we would have games and play dreidel, and there would be potato latkes, fried artichokes and other foods. If some of our kids' friends are visiting, we let them light the candles," she said.

Although her family does not celebrate Christmas, Davidson said they have joined in another family's holiday tradition for several years.

"We've been invited to help trim their tree early in December," she said. "This has been a family tradition for three generations."

Davidson even gets into the spirit of the holidays when greeted with "Merry Christmas!"

"People often ask me if I get offended when someone says, 'Merry Christmas!' to me. It doesn't offend me at all, not for a minute," she said.