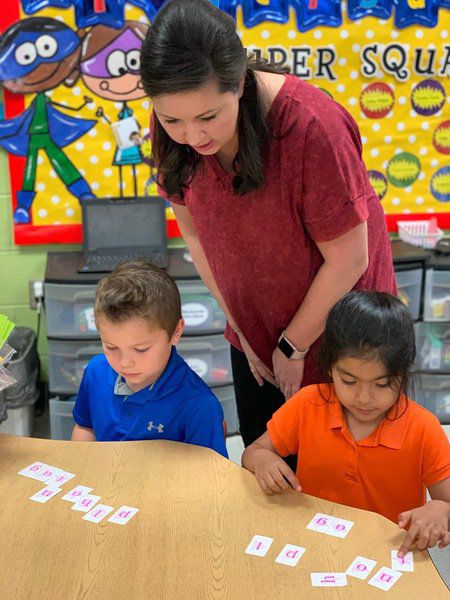 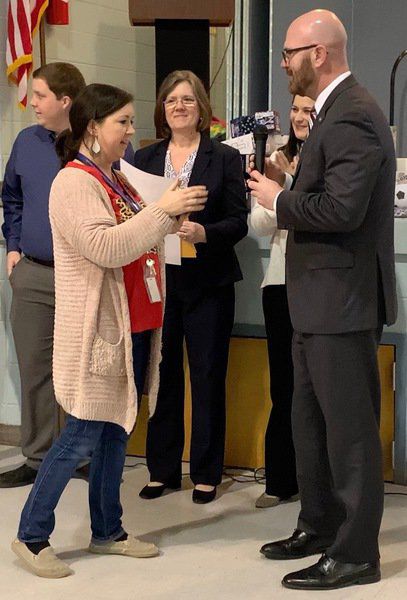 DECATUR — Valentine’s Day proved to be a little sweeter for one Newton County Elementary teacher who thought she was attending the kick-off for a cookie dough fundraiser until the unexpected happened.

Kindergarten teacher Morgan Joiner was unaware she was about to be named February’s Golden Apple teacher at an assembly on Feb. 14.

Joiner, who comes from a long line of educators, said she was shocked when she heard her name called.

“I was not expecting this surprise and was shocked, to say the least,” said Joiner, who has been with the district for a decade. “In this profession, it is an honor to be selected, even though I can think of some teachers that are more deserving.”

Principal Jason Roberson described Joiner as one of the most selfless, caring and dedicated educators he has ever worked with. She takes the time to establish relationships with each student while getting to know them as individuals, he said.

“Her attentiveness and caring nature bring the best out of each of her students, both academically and socially,” Roberson said. “She is also a leader within the kindergarten faculty.”

“For those and countless other reasons, Mrs. Joiner is very deserving of the Golden Apple Award,” Roberson said. “We are blessed with a number of extraordinary teachers, but Morgan Joiner stands out as a superstar among them.”

'I always knew I wanted to become a teacher'

Graduating from Newton County in 2005, the decision to teach was easy for Joiner, who said she was influenced by her parents and grandparents, who were also educators. Joiner also credited other educators, especially her kindergarten teachers.

“I always knew I wanted to become a teacher,” Joiner said. “My kindergarten teachers made learning fun and I knew that was something I wanted to do, especially the younger ones – they are my passion. They are like little sponges and soak up everything we do. It makes it nice and rewarding to see that.”

Before entering kindergarten, Joiner said it's important for parents to prepare their child with basic skills – recognizing and naming basic shapes and numbers, counting to 20, saying or singing the alphabet and writing their name.

'Each day is different'

“Each day is different in the world of kindergarten,” Joiner said. “We start our day waking up, greeting each other – starting on a positive note. Then we do phonics, reading, carpet time, and then a lot of hands-on to keep their little minds interested and engaged.”

Joiner's advice for someone who wants to become a teacher: “Go for it.”

“If you feel it is your passion, and only then,” she said. “It's a hard job with many responsibilities, and as educators, we wear many hats – teacher, mom, nurse, and counselor. Go in with a positive outlook, be compassionate, and have a very good attitude, because the kids – they are aware and alert.”

When asked how she wants her students to remember her, Joiner said, "I want them to have a love for learning because I made learning fun. That I taught them life skills and lessons they can use beyond kindergarten and into their lives.”

Joiner received a Golden Apple Teacher of the Month Certificate, a $300 cash award, and a $1,000 continuing education voucher for MSU-Meridian, and $1,300 in school supplies.

The presenting sponsor for February was Mississippi State University-Meridian.

The eight monthly winners will be invited to the Golden Apple Teacher of the Year banquet and that winner will receive a special award on stage (The Meridian Star Article), a custom-made Teacher of the Year Trophy, $2,500 cash to be used at their discretion and a $2,500 scholarship to be awarded to a deserving student in the teacher’s name.

When Ashley McClelland was a child, she'd sit in her bedroom and pretend she was a teacher,…

Bloom where you are planted.

PHILADELPHIA — After graduating from college with a degree in business administration, Anne…