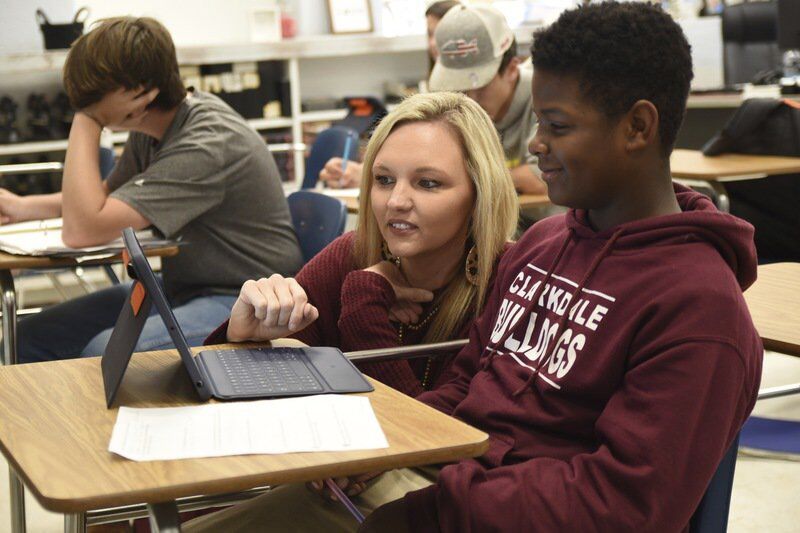 Sommer Webb, the Golden Apple Teacher for November, helps a student with an assignment at Clarkdale High School. 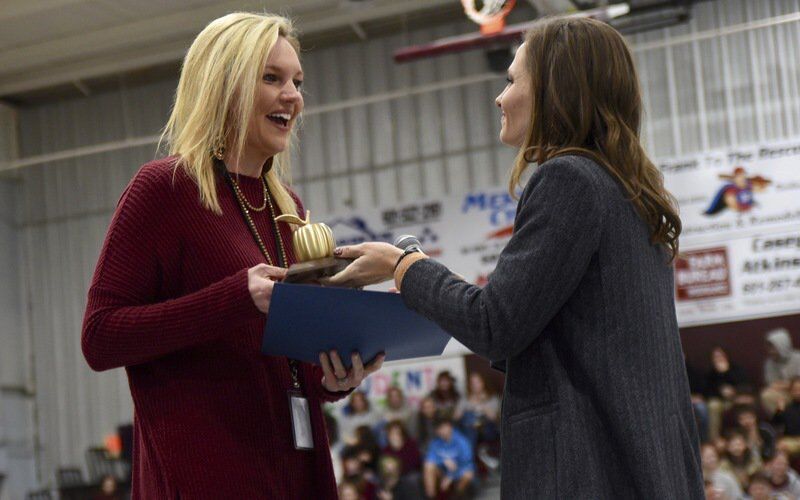 Clarkdale High School science teacher Sommer Webb goes the extra mile for her students because she wants them to succeed.

“If I know somebody is rooting for me and loves me and cares about me, I want to go the extra mile for them,” said Webb, who was named the Golden Apple Teacher for November during a ceremony at her school on Nov. 12.

“And I think that’s what a lot of my students do. They know, at the end of the day, Ms. Webb loves me. She has my back. And they’ll work hard.”

Webb said receiving the award was a shock and a honor to be counted among previously nominated elite educators.

The veteran educator began her career teaching science at Northeast High before moving to Clarkdale High, where she has spent the past seven years teaching eighth grade science and high school astronomy and environmental science.

Webb said her students are at a unique age where they’re becoming their own persons, but still like to have fun.

“A lot of times people kind of shudder when you talk about 13 and 14-year olds, but I love them,” she said. “I love how they still want to please you, but are coming into their own personality. It’s the kids for me, and I love it.”

Webb said one of her favorite parts of teaching is when she sees her explanation register with students. The moment a confused look  disappears from a student’s face and is replaced by pride and accomplishment is a reward all its own.

“I love when we’ve been going over something for a long time, and most of the class has the concept, but there’s just one or two kids that are struggling,” she said. “And ou just say something and they get it, and then you see how proud they are of themselves.”

Teaching for Webb goes beyond the science lessons. It’s about being a good citizen, being a good neighbor and trusting in your abilities.

“I want it to be more than just teaching science,” she said. “I want to make them better citizens. They can change the world, they just have to believe in themselves.”

And until they do, she’ll believe for them.

About the Golden Apple

Webb received a Golden Apple Certificate and $1000 (approximate value) in school supplies from Avery Products and $200 in cash.

A television program will be produced in May 2022 in honor of the monthly Golden Apple Award winners and to announce the Teacher of the Year. The program will be broadcast on CBS24, NBC30, FOX30, Bounce TV and METV.

The Teachers of the Year will receive a special award (The Meridian Star article), a custom-made Teacher of the Year Trophy, $1,500 cash to be used at their discretion and a $1,000 scholarship to be awarded to a deserving student in the teacher’s name.