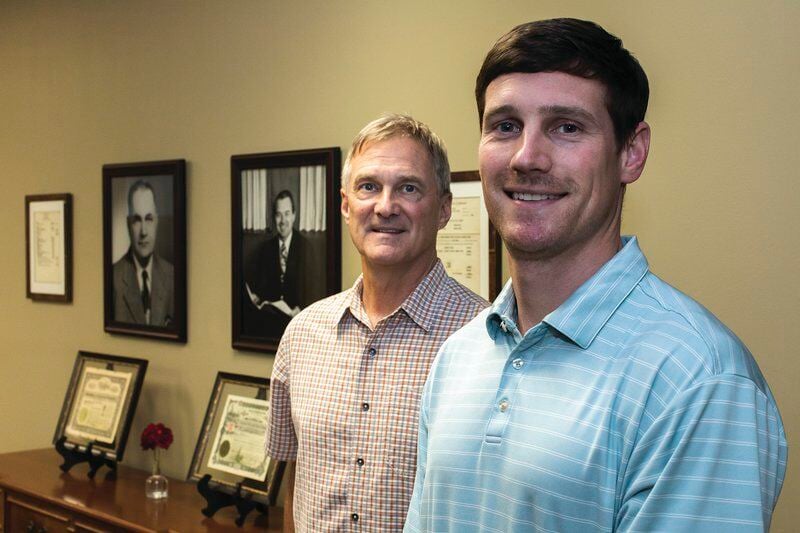 Four generations of McGinnis: James E. “Jim” McGinnis III, president of McGinnis Lumber Company Inc., left, and son Davis, who is preparing to taking on the reins, stand beside photos of their predecessors, J. Earl McGinnis Sr., founder of the company in 1922, and James E. McGinnis, Jr., who worked for the company 64 as president from 1969-2005. 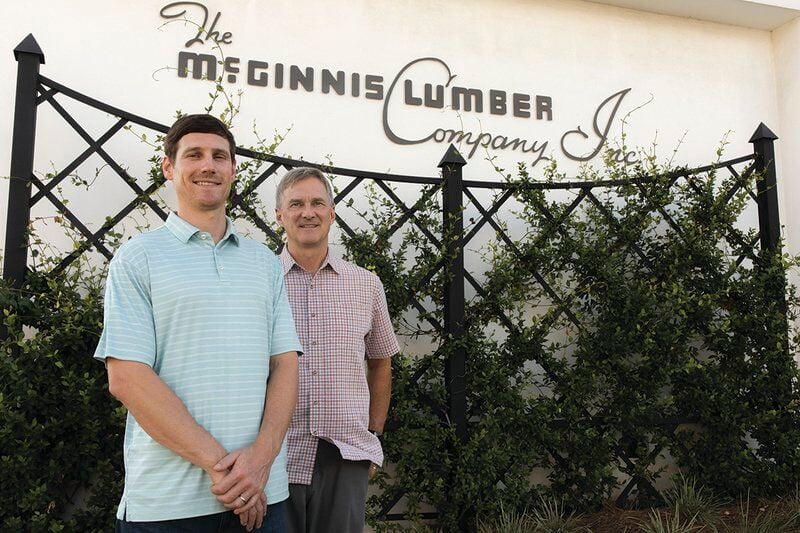 “We are extremely happy and feel very fortunate that we have made it this long. But it is not lost on any of us who have been named McGinnis that there have only been four people out of the dozens and dozens to work in this business with that last name.” James E. “Jim” McGinnis III, President of McGinnis Lumber Company Inc.

McGinnis Lumber Company Inc. is set to celebrate its centennial in January, a milestone for the Meridian-based family business that has weathered 20th Century crises like the Great Depression and World War II and this century’s economic setbacks from a recession and a pandemic.

Three generations of the McGinnis family have run the lumber company for the past 100 years as a fourth generation waits in the wings for his turn to carry on the family legacy.

“We are extremely happy and feel very fortunate that we have made it this long. But it is not lost on any of us who have been named McGinnis that there have only been four people out of the dozens and dozens to work in this business with that last name,” said James E. “Jim” McGinnis III, the current president of the company.

His grandfather, J. Earl McGinnis Sr., founded the company in January 1922 and served as president until he died in 1969. His father, James E. McGinnis Jr., worked for the company for 64 years, serving as president from 1969 until 2005.

For years afterwards, he still came to the office almost daily until he passed away in 2016. Jim’s son, Davis McGinnis, currently serves as vice president and a pine buyer.

“You don’t run a business for this long without having a lot of dedicated, capable, motivated people to run it,” Jim said. “I am very grateful for the people who work in this business now and the ones who worked in it way before I ever got here.”

McGinnis Lumber Company is one of the oldest family-owned wholesalers of forest products in the nation, shipping products into 42 states and buying from manufacturers in 25 states.

His grandfather, J. Earl, grew up in Bowling Green, Kentucky. After attending community college, he decided to join his cousin down South to try his luck in the lumber business. After a few years, J. Earl found his way to Meridian and opened McGinnis Lumber Company.

From the 1920s through the 1940s, he weathered some hard times what with the Great Depression and World War II. Then, business began to boom.

“There were times when the business came very, very close to going out of business. Because of that, my grandfather advised my dad to go to law school,” Jim said. “But my dad didn’t want any part of law school. He wanted to come into the lumber business from day one and obviously was successful at it.”

James immediately joined the company in 1949 after graduating from the University of Mississippi with a degree in business. In 1952, while he was on his honeymoon, the elder McGinnis was in a car wreck. Due to the serious injuries he received, J. Earl could no longer spend as much time in the office, so James took over most of his duties, Jim said.

James’ passion for the lumber business was evident. He talked lumber at the office and at home. He made numerous contacts across the nation and pushed McGinnis Lumber to the forefront of the industry.

“It was very obvious he loved what he did, and it was infectious,” Jim recalled. “That is probably why I, and I think it was the same for Davis, made the decision to come into the business because my dad was so enthusiastic about it.”

Jim briefly flirted with the idea of law school in 1980 after graduating from Ole Miss with a bachelor’s degree in English, but decided to join McGinnis instead, a decision he knew his father was awaiting.

He started as a pine buyer and handled the company’s then-Caribbean sales. He also worked to help the company find new innovative ways to get products to marketplace.

After becoming president in 2005, Jim purchased a building on 22nd Avenue downtown to serve as the headquarters for McGinnis Lumber, moving out of a World War II Army barracks at Key Field.

In 2014, Davis joined McGinnis Lumber after graduating from Ole Miss with a bachelor’s degree in exercise science. He had thought about going into the military or physical or occupational therapy but decided to join the family business instead. He and his wife, Karli, have a 4-month-old son, Parks.

“In the back of my mind I always knew this is what I was going to end up doing. My parents never pressured me to work in the family business, though my grandparents did,” joked Davis.

“There are not that many people in the world who get the chance to work in a family business as old as ours, so I am very grateful for the opportunity, and I do understand how rare it is to be able to work with your dad and your grandfather,” he added.

Davis, who pays close attention to the company’s financial numbers just like his grandfather did, said he feels like the company is in good shape for the future.

“We are growing. It is an incremental, or slow growth, but that is a pretty good way to ensure you are not going to overgrow,” he noted. “I would like to see us continue to grow at that rate.”

“If I am fortunate enough to still be working here when my son is ready to start his career, if he wants to work here, then I hope the work environment is the same,” he said. “We have great people who work hard and care about the company.”