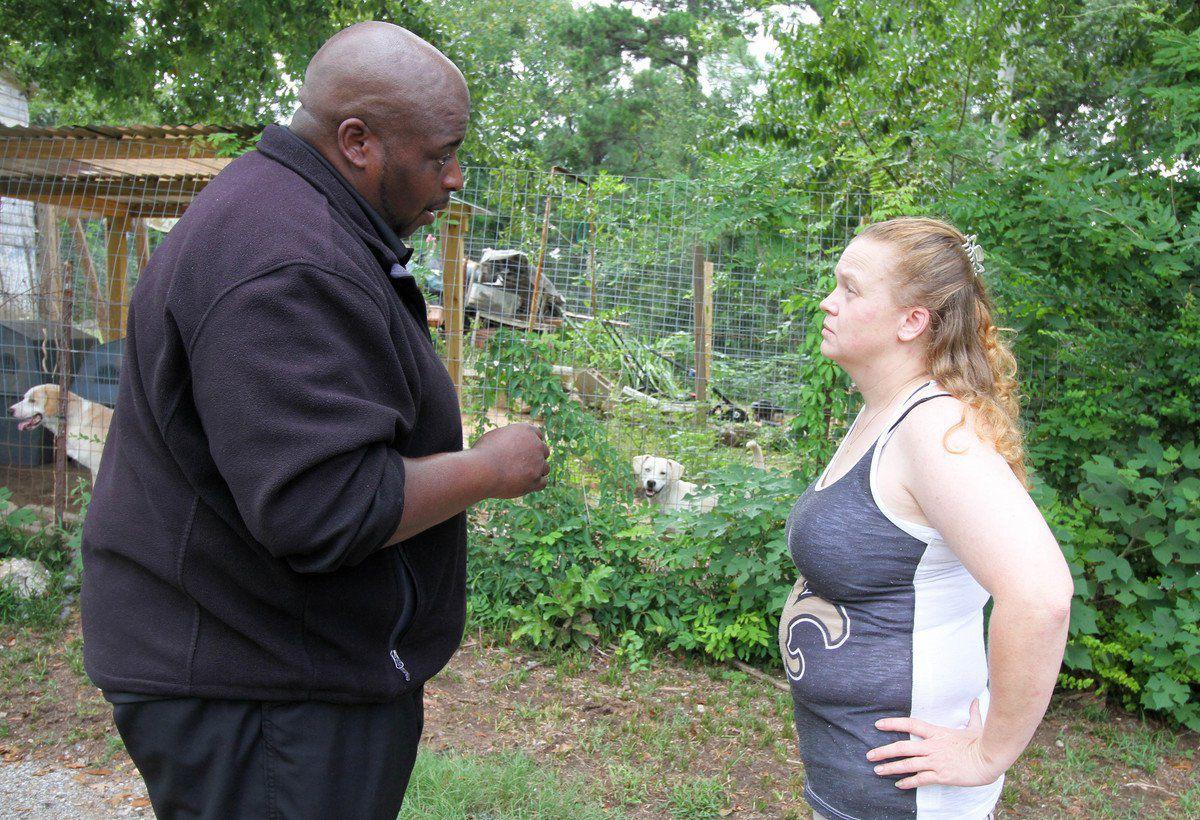 Rocky Rockette, director of the Lauderdale County Animal Control, talks with Marie Lee, a complainant of dogs near her home. 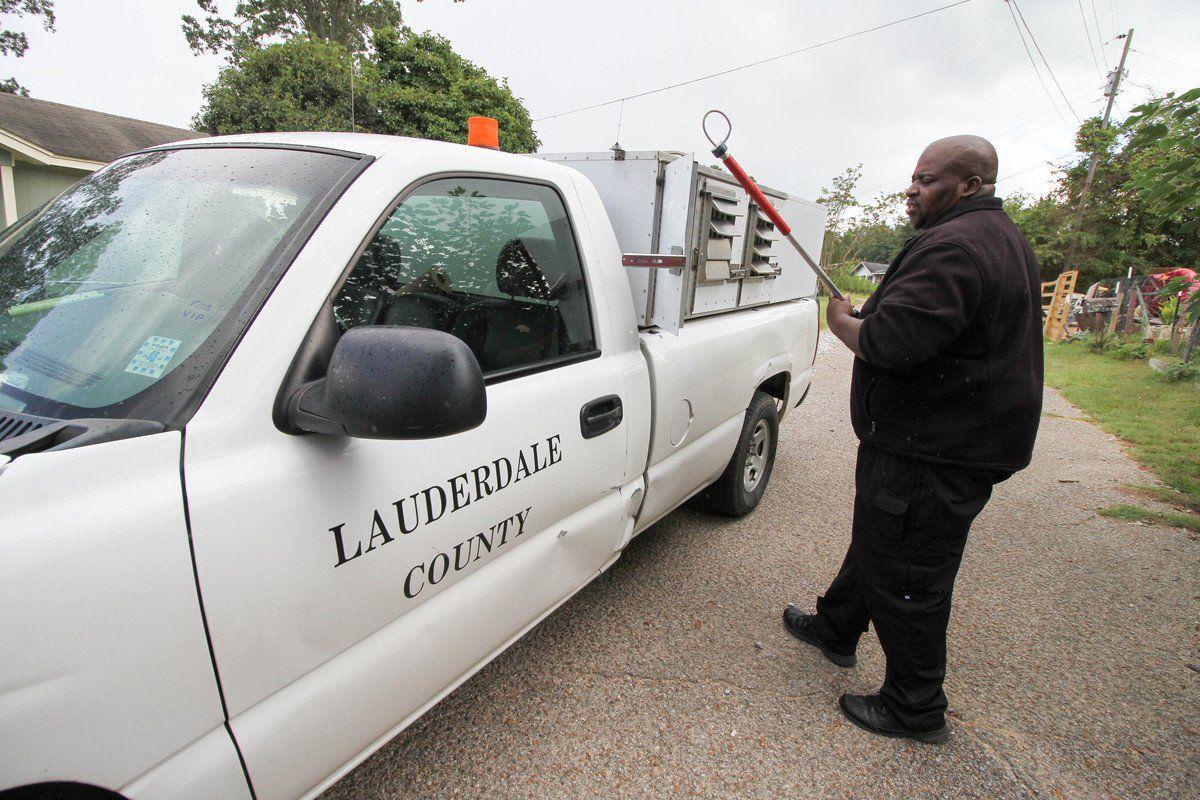 Rocky Rockette, director of the Lauderdale County Animal Control, retrieves a control pole from his truck Wednesday afternoon as he prepares to enter a property with dogs. 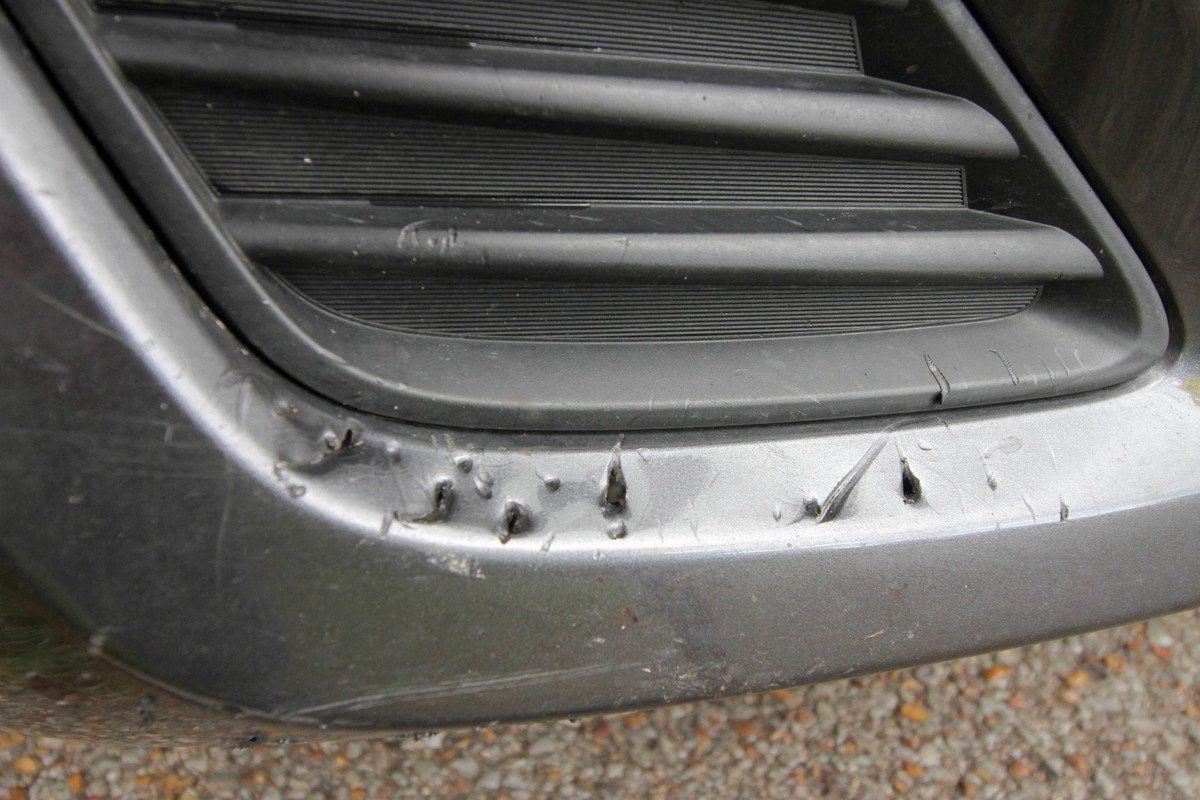 Punctures in a bumper that are claimed to be from dogs in one neighborhood in Lauderdale County.

Rocky Rockette, director of the Lauderdale County Animal Control, talks with Marie Lee, a complainant of dogs near her home.

Rocky Rockette, director of the Lauderdale County Animal Control, retrieves a control pole from his truck Wednesday afternoon as he prepares to enter a property with dogs.

Punctures in a bumper that are claimed to be from dogs in one neighborhood in Lauderdale County.

When it comes to animal control in Lauderdale County, city and county residents face a different set of rules, which has posed a problem for one county resident.

Marie Lee, who lives just outside the city limits in the Lakewood Subdivision, said there are threatening dogs that run amok in her neighborhood.

“Anytime you pass the house where the dogs live, they run into the road, barking while trying to attack you,” Lee said. “My main concern is for the children who have to pass that house every day to get to the bus stop. They are terrified because one of the children has been bitten before.”

Trying to talk to the dog owners has been unsuccessful, Lee said. And there's confusion as to who owns the dogs.

“I have tried to talk to the dog owners several times, but they won’t talk to me about it,” Lee said. “The dogs were coming at me one day when I was walking, one of the owners was out on the porch and I was screaming his name, you would have thought he had ear plugs in.”

Since the county has no leash law, her only alternative may be to file nuisance charges.

Lee said she reached out to Rocky Rockette, director with Lauderdale County Animal Control, who advised her on what steps to take.

“We only have a nuisance law, so I advised her if the animals are becoming a nuisance to her or someone else in the neighborhood, then she needs to file charges,” Rockette said. “Once she files, if the judge rules in her favor and declares these animals a public nuisance, he will place a restrictive on that individual about their animals, and they will have to keep them put up.”

Rockette said he will talk to the animal owners to try to work through the situation.

“I am going to talk with the dog owners and make the suggestion, because at this point I can’t legally make them put their dogs up,” Rockette said. “If a judge passes an order to keep those animals confined to the property, we will enforce that. If the dogs do bite someone and the victim wants that animal under quarantine, we will pick those animals up. They would be able to get their dogs back, but they would have to meet certain requirements. If they fail to comply with any of those restrictions then the animals would be seized."

“Mr. Rockette is going to check the situation out and we are going to see what we can do to help them,” Rutledge said. “We don’t have a leash law like the city does, but we are going to do all we can to get this problem solved.”

Wednesday afternoon dogs were fenced in after Rockette's visit to the neighborhood.

For Lee, she said she just wants people in her neighborhood to feel safe.

“I understand there is no leash law, but at the same time our children should be able to walk to the bus stop and not be in fear of being attacked by a dog,” Lee said. “This has always been a safe neighborhood. Kids should be able to go outside and play freely. We should all be able to walk down the road and not worry about a dog biting us.”

For Meridian residents, there is a leash law, according to Animal Control Senior Officer Freddie Collins.

“We have a leash law that says all animals that reside in the city of Meridian have to be contained, inside a fence, or on a chain on the property,” Collins said. “But, if you take the animal away from the property, it must be on a leash.”