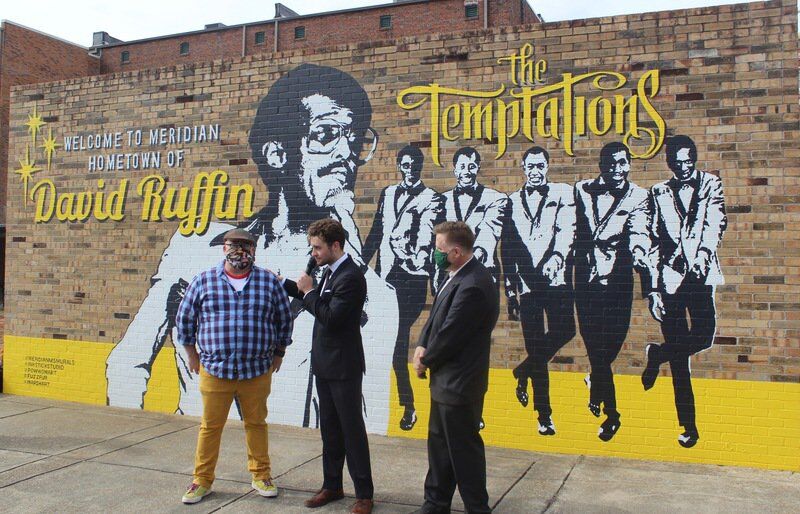 James Prewitt (center) speaks as artists Clay Haycox and Daniel Ethridge listen during the unveiling of a mural recognizing singer David Ruffin in Meridian Saturday. Ruffin, a native of Whynot, was known as the singer of The Motown group The Temptations. 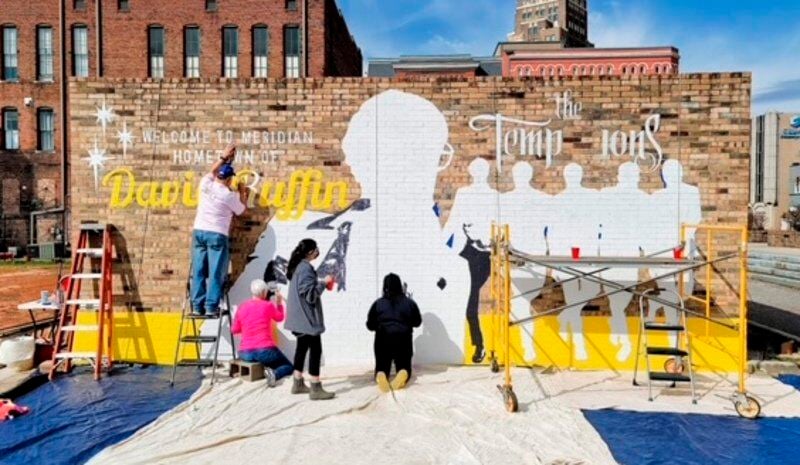 Artists work on the David Ruffin mural that was unveiled Saturday. 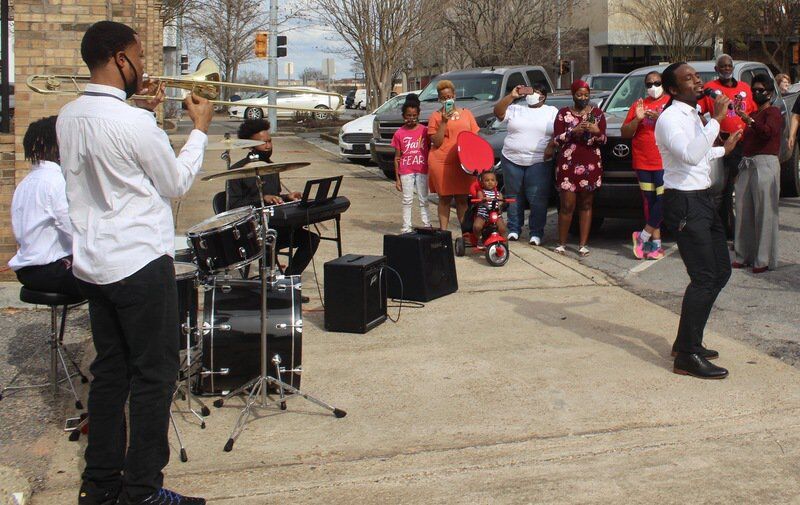 Fast forward to more than 50 years later, and a likeness of the iconic singer from Whynot, Mississippi, graces a mural with his fellow songbirds, right in the middle of the downtown Meridian.

The city held the official unveiling of the project, located on the edge of Dumont Plaza, on Saturday.

James Prewitt of Meridian, a sophomore at Tulane University in New Orleans, was the brainchild of the idea to recognize Ruffin with the mural, the first of many anticipated  art projects around the city.

Who would you like to see a mural dedicated to in Meridian?

Prewitt, working as an intern for the city, says he wanted to find a way to honor local musicians and create foot traffic in the downtown area.

“I was inspired when I saw a similar mural in the Gulch area of Nashville," he said. "When I was a senior at Meridian High School, we created a class mural as our senior gift, so it just seemed natural to take this project on.”

Five designs were presented to Mayor Percy Bland for approval, and after seven weeks, the mural stands on the edge of Dumont Plaza for all to see.

“The mayor wants this to be the first in a series of murals honoring other artists, such as Big Krit, and we welcome volunteers and businesses who want to keep this ball rolling for the Queen City,” Prewitt says.

"We want this entertainment district to have a college-like atmosphere," Bland said. "We want to have festivals on the City Hall lawn, have people, young and old, enjoying this area. With our new go-cup ordinance, citizens and visitors can stroll around and appreciate this phenomenal art. [Prewitt] did in four weeks what we have tried to do in two years."

Meridian Museum of Art Executive Director Kate Cherry was on the public arts committee that approved the mural.

"I was familiar with Haycox's mural at the Queen City Cigar shop, but I was completely amazed how Ethridge orchestrated the design on his computer and applied it to having the piece painted," Cherry said.

Creating the mural was no easy task – Ethridge recalls working two to three days a week, no matter the weather.

“We sketched the outline in pencil, and then we worked in the elements for 4 to 5 hours each session," he said. "This mural is a collaboration of many groups, MHS students, MCC students, MMA art students, people who would walk by, see us working, and would pick up a paintbrush to help,” he says.

Haycox adds, “When [Prewitt] came to me with his idea for the mural, I knew we could make it happen.  Immediately, I contacted [Ethridge], and before long, we had so many people on board to help.”

A microphone stand, complete with a period-correct microphone, stands in front of the mural, perfect for photos.

Brian Warren, the coordinator for precision machining engineering technology at MCC, said it was easy to select who would design and construct the microphone. He picked two of his top students, Michael Bishop and Jae Murphy.

"In addition to their superior skills, [Bishop and Murphy] are music enthusiasts," Warren said. "They form the band Via Novus, so it seemed natural for them to help create this part of the mural. Bishop was also born and raised in Whynot. All of the pieces just fell into place."

"We had to get creative with our software and work with special designs to get everything just right. Murphy had the idea for the cool circular top of the microphone," says Bishop.

"From design to creation, this project was a fun experience and a chance to apply all of the techniques we have been learning at the Gene Haas Advanced Manufacturing Center at MCC," Murphy explains. "As a musician and a member of the Whynot community, I'm grateful for the opportunity to be involved in memorializing the iconic David Ruffin."

It was a cloudy day, and the sun waited until the afternoon to shine, but that didn’t dampe…

The unveiling of the mural comes after a section of Eighth Street was officially renamed “David Ruffin Boulevard” in October 2019, when Ruffin's star was also unveiled on the Mississippi Arts + Entertainment Experience’s Walk of Fame on Front Street.

Like magic, massive mural appears at Cater's Market in Meridian

They say good things come in threes, and the latest mural project at Cater’s Market, created, designed, and painted by The Meridian Museum of…

Rebecca Anne York, 25, of Meridian, Miss., passed away Saturday, Nov. 20, 2021, at her residence. Robert Barham Family Funeral Home is honored to be entrusted with the arrangements.