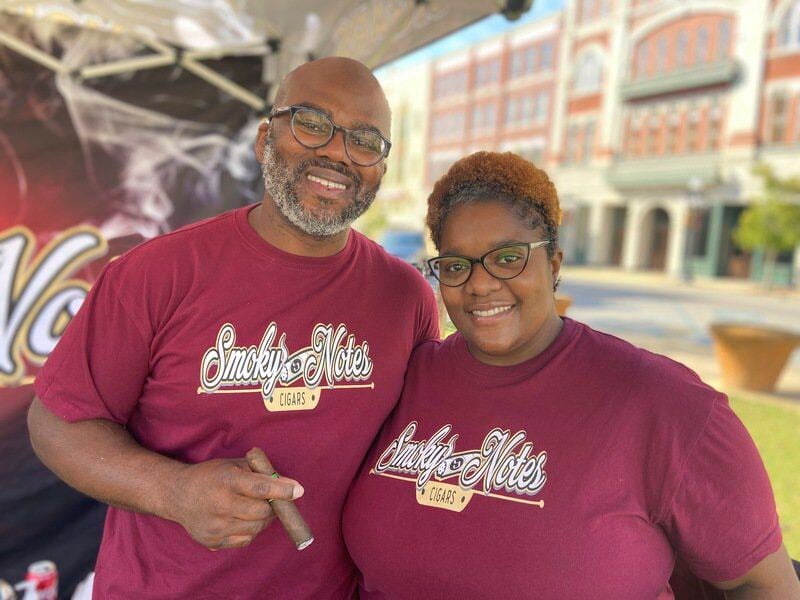 Michael Spears and his wife Kimmea are the owners of Smoky Notes Cigars. 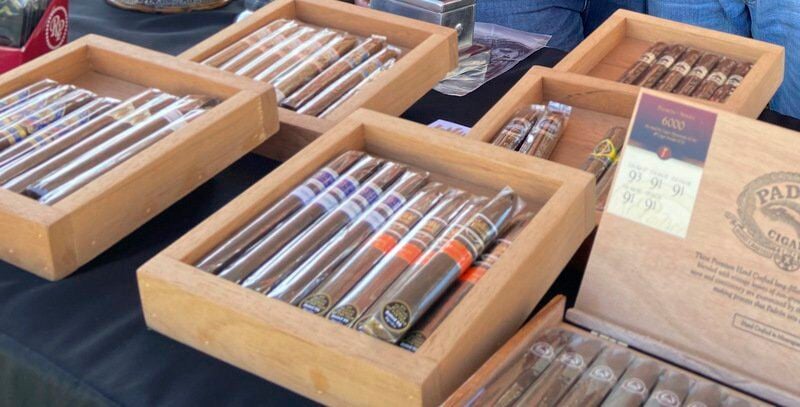 Helping a person select their first-ever cigar is an exercise in armchair psychology, according to Meridian’s Michael Spears.

“You have to know a person a little when you make a recommendation,” explained Spears, who owns Smoky Notes Cigars with his wife, Kimmea. “You aren’t going to recommend the same cigar to a person who is very loud and outgoing and a person who is more quiet and mellow. People need something that is suited to them.”

The couple operates their business as a pop-up cigar shop. They are available to do events like festivals and weddings, and also periodically sell their cigars from Dumont Plaza Downtown. They also have set up on Eighth Street and in the North Hills area, Kimmea Spears said.

Michael Spears became interested in cigars about 10 years ago, when a friend in Maryland introduced him to the experience. Soon, he and his wife found themselves checking out cigar lounges when they would visit larger cities.

“More and more, we realized that we wanted to bring that experience to people in Meridian,” Kimmea Spears said.

Michael Spears said that in addition to personality, he likes to ask clients about their food preferences. Then, he uses that information to determine which cigars would appeal most to them. A person who prefers sweets, for example, would likely prefer a cigar with a lightweight and creamy flavor.

Someone who loves spicy foods would be more likely to prefer a cigar with a peppery influence.

“Sometimes people will say they want to smoke what I’m smoking,” Michael Spears said. “But what works for me won’t necessarily be something you would enjoy. People have personal preferences.”

The couple acknowledged that the COVID pandemic has presented challenges to their business, which they officially started in August. But at the same time, they say that they also have been able to find some advantages.

“People aren’t having as many events and that is a challenge,” Kimmea Spears said. “But we do have the advantage that so much of what we do is done outside.”

Michael Spears said that while there are fewer events, customers seem more interested in purchasing items to enjoy at home. The business has shifted to offering delivery services, too.

The couple both have full-time jobs. Kimmea Spears is a social worker and her husband is an airplane mechanic, as well as a photographer. They said that for now, they enjoy having the business as a side hustle. Still, they are open to expanding if opportunities arise.

They also have secured a license to sell other tobacco products, including pipe tobacco, statewide. They are the only independently registered tobacco shop in the state, Kimmea Spears said.

The couple said they plan to start offering cigar education classes for customers, providing them with information on how cigars are made, where they come from and the different types of cigars.

“We will see where we go with it,” Michael Spears said. “We are open to what happens with it.”

Michael Spears said that more than anything, he likes the way the business allows him to get to know different types of people.

“We are both people who love getting to know people,” Michael Spears said. “It’s great to be able to just slow down and talk, find out about a person and what they like – what they are about. You learn a lot and it’s something we enjoy.”

To place an order or get information on future pop-up events, go to the business’ Instagram page, smoky_notes_cigars. You also can reach the business by email at Smokynotescigars@gmail.com or at 601-486-3850.