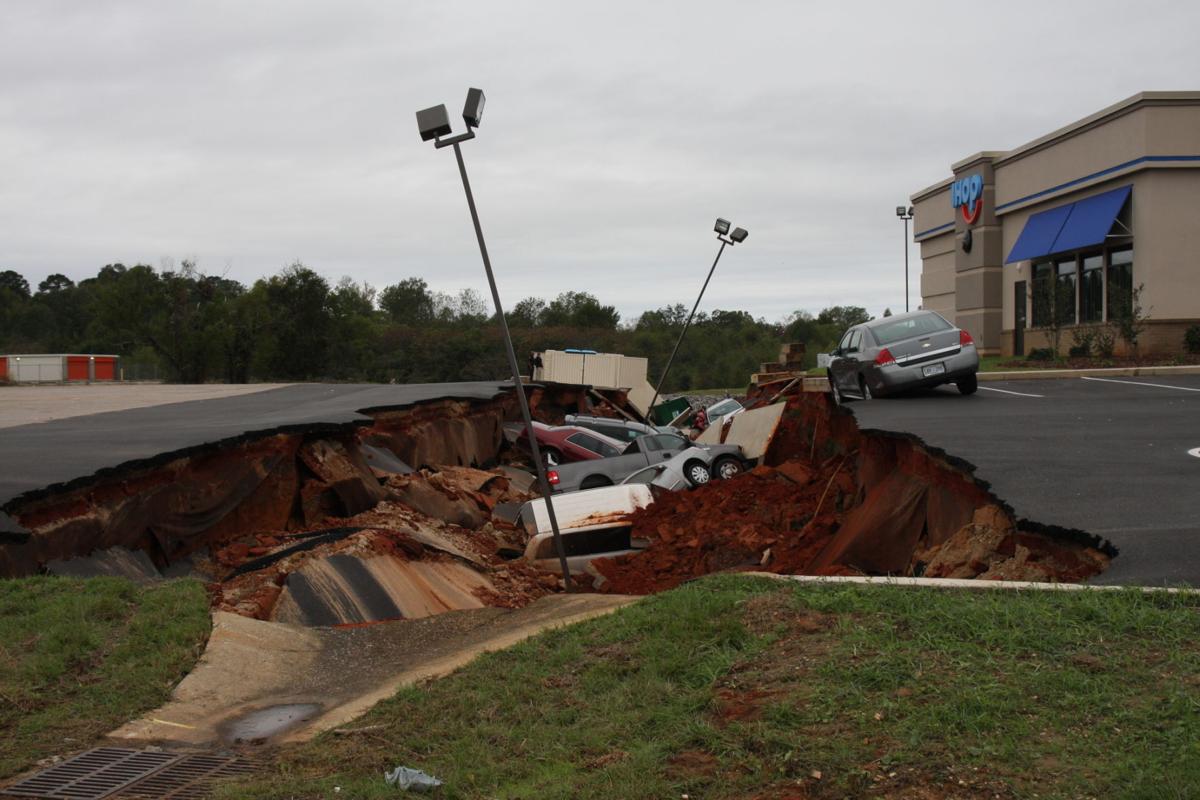 No one was injured Saturday night when a section of a parking lot outside of the IHOP in Meridian collapsed. 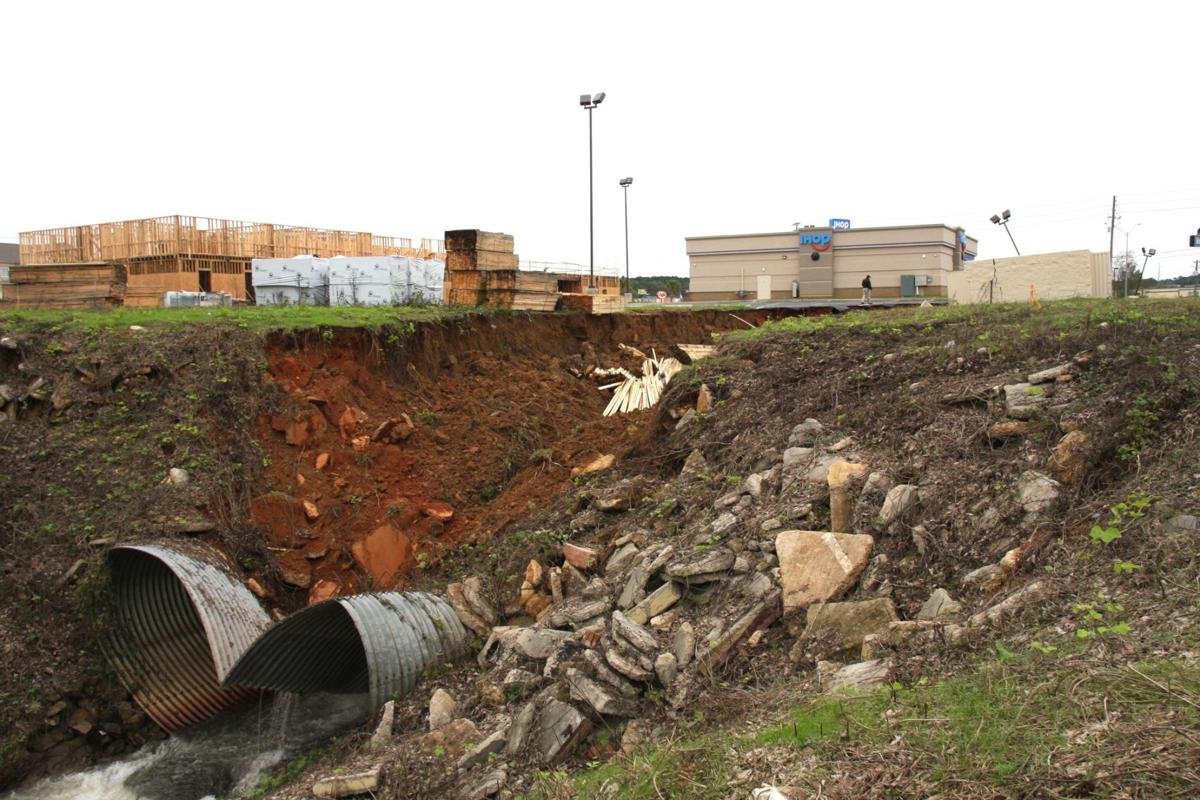 This storm culvert that feeds into Sowashee Creek is located at the tail end of a cave-in at a Meridian restaurant Saturday night that swallowed 12 cars. 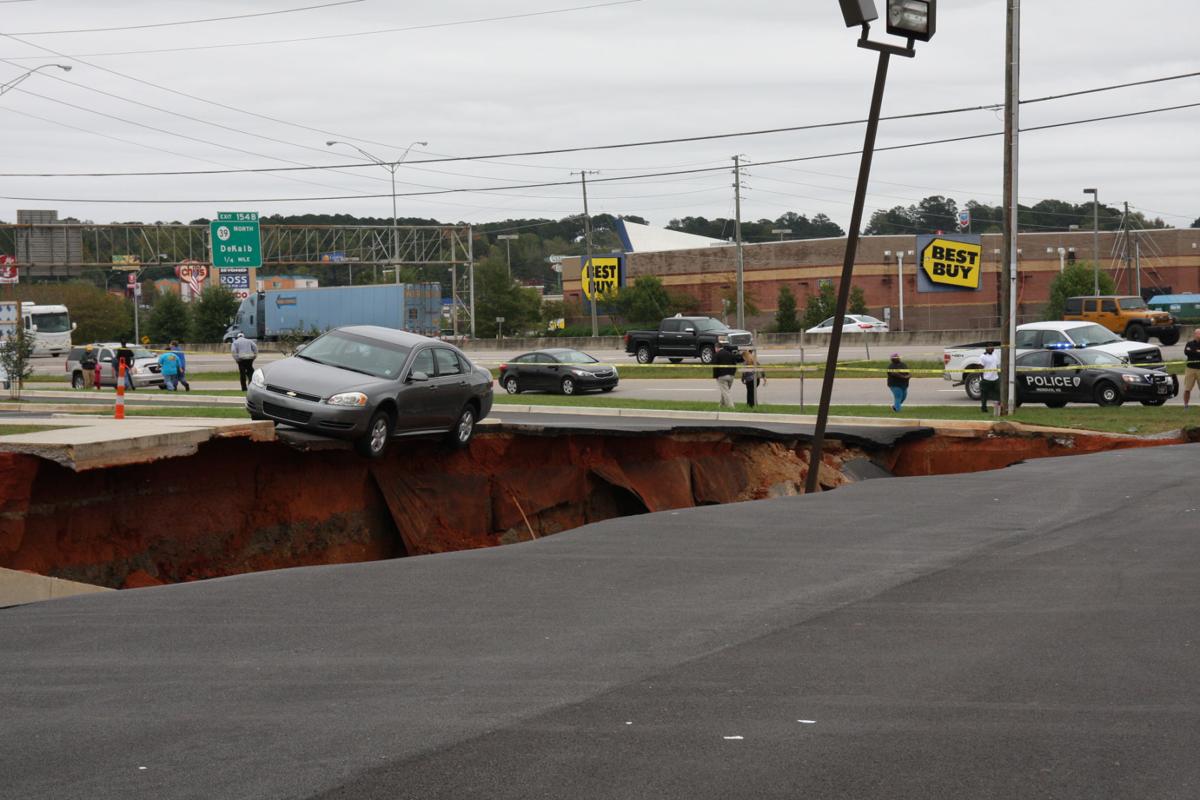 A car teeters on a section of pavement about 400 feet long that collapsed in Meridian Saturday night.

No one was injured Saturday night when a section of a parking lot outside of the IHOP in Meridian collapsed.

This storm culvert that feeds into Sowashee Creek is located at the tail end of a cave-in at a Meridian restaurant Saturday night that swallowed 12 cars.

A car teeters on a section of pavement about 400 feet long that collapsed in Meridian Saturday night.

Officials in Meridian said it will likely be Monday before they can determine what caused a section of parking lot about 35 feet wide and 400 feet long to collapse and swallow 12 cars outside an IHOP restaurant that had opened earlier in the week.

Meridian Public Safety Director Buck Roberts said engineers and contractors would be on scene Monday to try to determine the cause of the collapse. He declined to comment on a possible cause.

"I am not an engineer," Roberts said. "It would just be speculation."

Roberts did say the collapse was not a result of a sinkhole as had been reported earlier. Sinkholes are caused when an underground water aquifer dries up, leaving a void that results in a failure of the soil above.

"You can call it what you want, a cave-in or whatever, but it is not a sinkhole," Roberts said.

Emergency crews were called to the IHOP restaurant on North Frontage Road at about 7:15 p.m. Saturday and discovered that a section of the parking lot had collapsed, dropping cars, trucks and SUVs into the void that appeared to be about 15 feet deep.

Officials on scene said there were no injuries.

Gwendolyn Fikes said her daughter's Honda Accord was one of the vehicles that fell into to the chasm. Fikes said she and her daughter had stopped by the restaurant to eat last night.

"We'd been in there about three minutes," Fikes said. "Then everything went black and we heard a boom."

Those in the restaurant went outside, they discovered the ground had given way.

Heavy rains that dumped up to 10 inches in the area over the past two weeks may have been a contributing factor, an official on scene said. It was raining most of the day Saturday prior to the collapse.

The area that caved in follows the path of an underground storm drain that dumps into nearby Sowashee Creek. A metal pipe that funnels storm water runoff into the creek had buckled where the drain funnels the rainwater into the creek.

Roberts confirmed reports of a broken underground water main at the site of the collapse, but said "the break is not the cause of our problems."

A firefighter at the scene Sunday said crews were still working to shut the water off. The fireman said it was believed the collapse caused the water main break.

"We won't know exactly what happened until engineers can determine the cause," Roberts said.

The area was the site of recent construction. The IHOP, which crews have been working on for months, opened only last week. Work is also underway adjacent the restaurant to construct a new hotel.

An employee at IHOP, who declined to give his name, said the restaurant owners have all the expenses associated with building the restaurant and hiring employees but now have no income from the property, which has been closed for safety reasons.

"The restaurant will open as soon as it is safe," Roberts said. "That may be days, weeks or a month."

Sunday, onlookers were gathered on North Frontage Road outside the area of the collapse. Many were taking photos. Police had cordoned off a two-block area around the site and a policeman with a megaphone was admonishing them to move on to keep traffic moving.

Officials were concerned Sunday that the collapse would worsen. Roberts said there span of the collapse had widened overnight and stress cracks were visible in the concrete and earth along the site of the cave-in.

Crews won't be able to remove the vehicles into the soil dries and the site is stabilized, Roberts said.

"If it stops raining for a while, I think we will be OK," Roberts said.

City officials stated in a press release Saturday that North Frontage Road was structurally sound and would remain open.