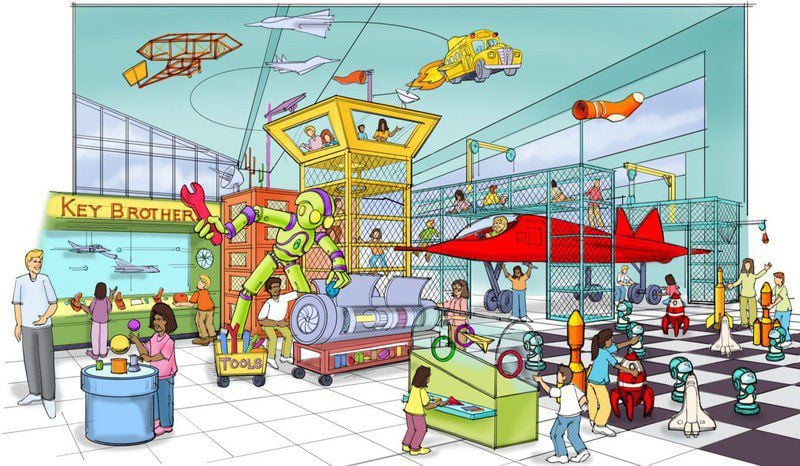 Concept art for the Mississippi Children's Museum in Meridian depicts a Key Brothers interactive exhibit as well as play spaces for children to learn about concepts related to flight. 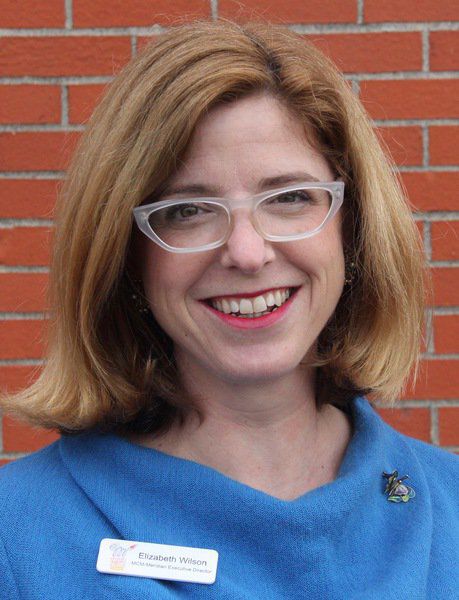 Concept art for the Mississippi Children's Museum in Meridian depicts a Key Brothers interactive exhibit as well as play spaces for children to learn about concepts related to flight.

Just before the new year, Meridian residents saw the first signs of progress at the future site of the Mississippi Children’s Museum Meridian: demolition crews began work at the Old Sears Building on 22nd Avenue and announcements  were made of asbestos abatement.

But while site preparation continues, planning what goes inside of the multi-million dollar museum hasn’t stopped, with Wier Boerner Allin designing the facility and Kraemer Design & Production, Inc. designing the exhibits and gallery spaces.

The decision to enlist Kraemer as the exhibit designers came from the work they did on the Jackson-based museum.

“There are not a lot of children museums designers and they’ve done work in New York, Chicago, LA…,” Wilson said. “They’re very talented and they did the Jackson museum.”

Previously, the museum estimated that 172 construction jobs would be created in addition to 31 permanent jobs. The project will have $25 million in economic spending initially with another $2.6 million annually.

According to renderings, the 10,000-square-foot exhibit floor will feature trains, stages and giant, interactive brains, along with three exhibits focusing on Health and Nutrition, Arts and Literacy and STEM, or Science, Technology, Engineering and Mathematics.

The museum will offer a combination of self-guided exploration for children, as well as guided classes and instruction, Wilson said.

“As a parent, you have to lead your children,” Wilson said. “Here, they get to lead us on the path they want to take.”

Wilson said that the Washington D.C. Smithsonian had its own Sparklab, researching what exactly made children into inventors.

“It’s pen and paper. All inventors start with pen and paper,” Wilson said. “So we wanted to have space for children to concept an idea and then then test it — whether it’s art or engineering.” 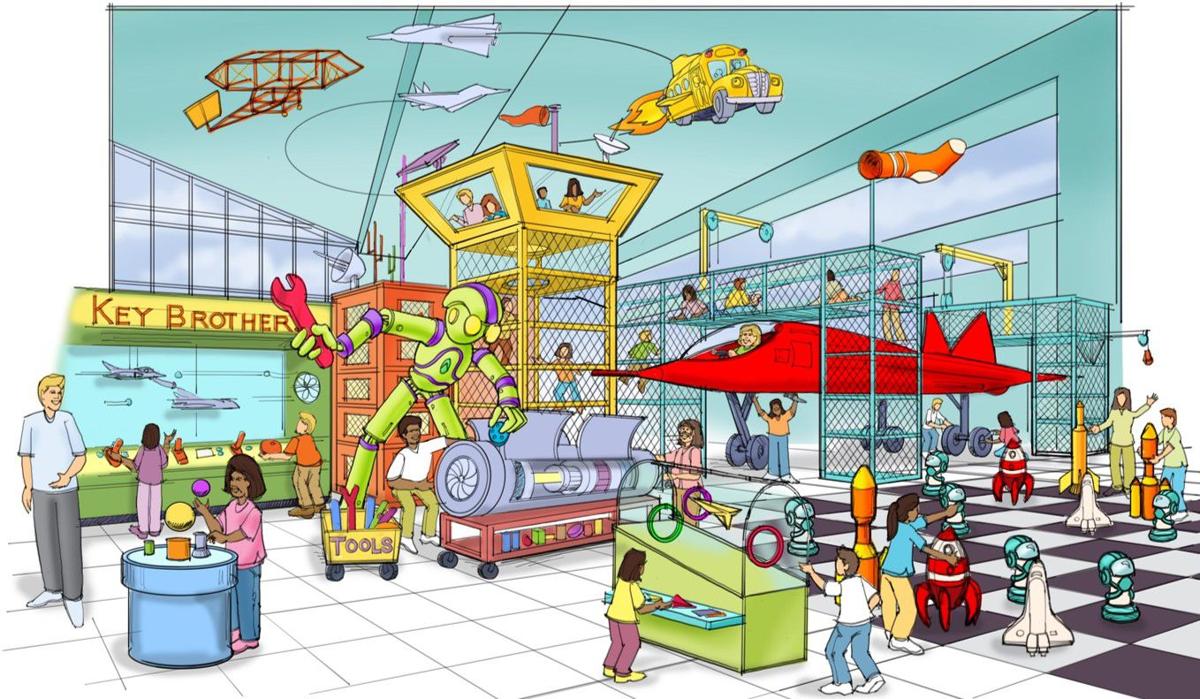 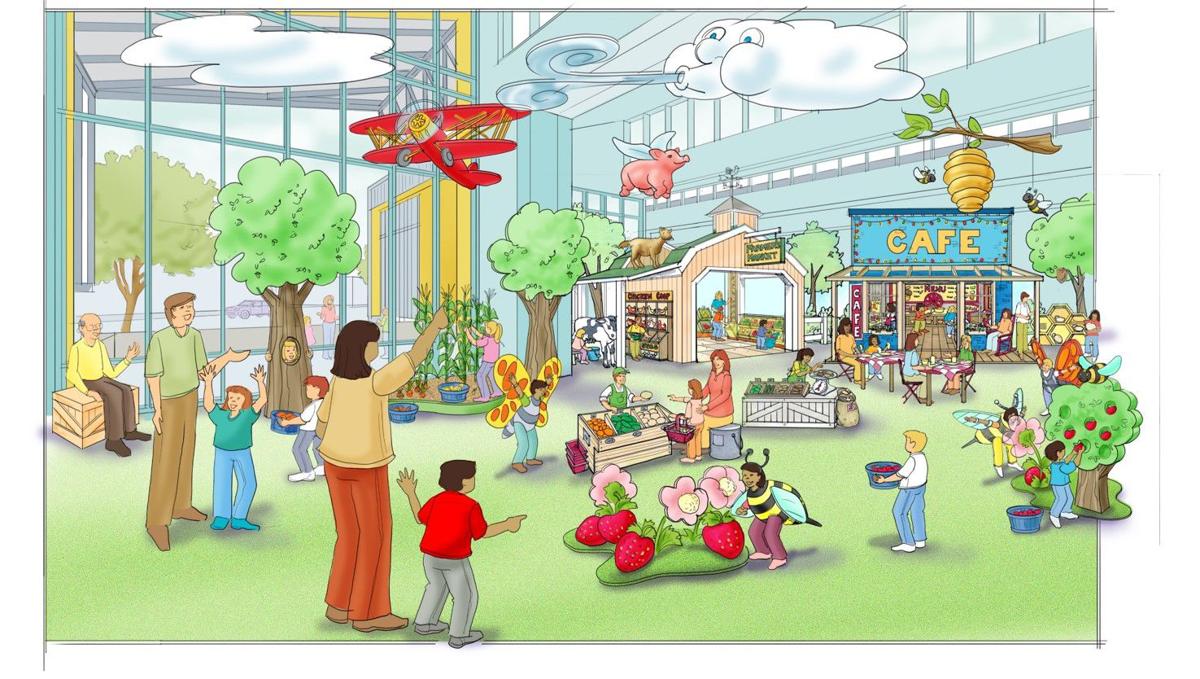 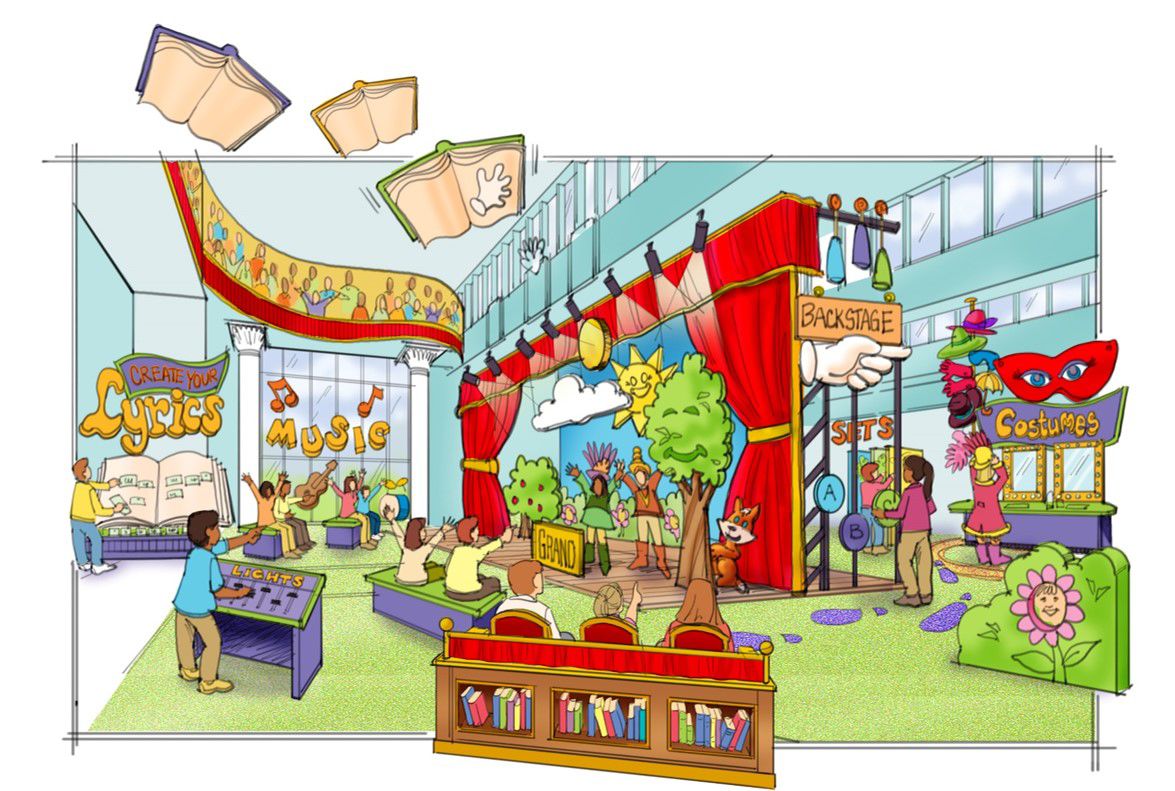 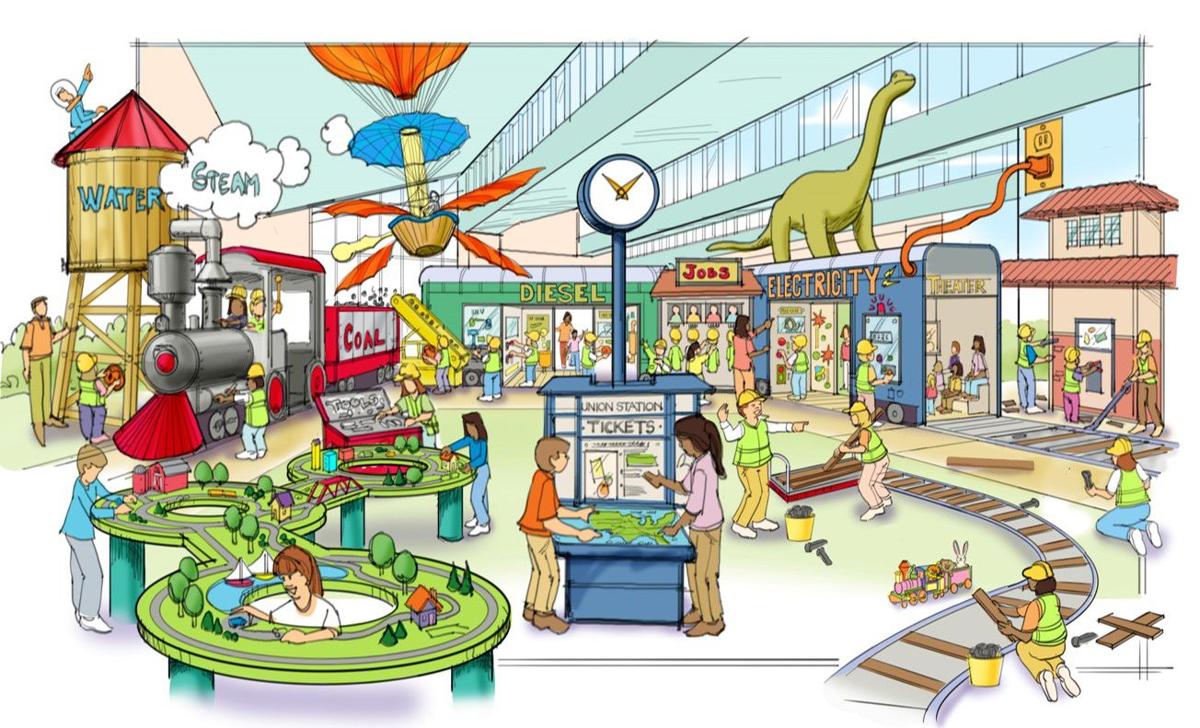 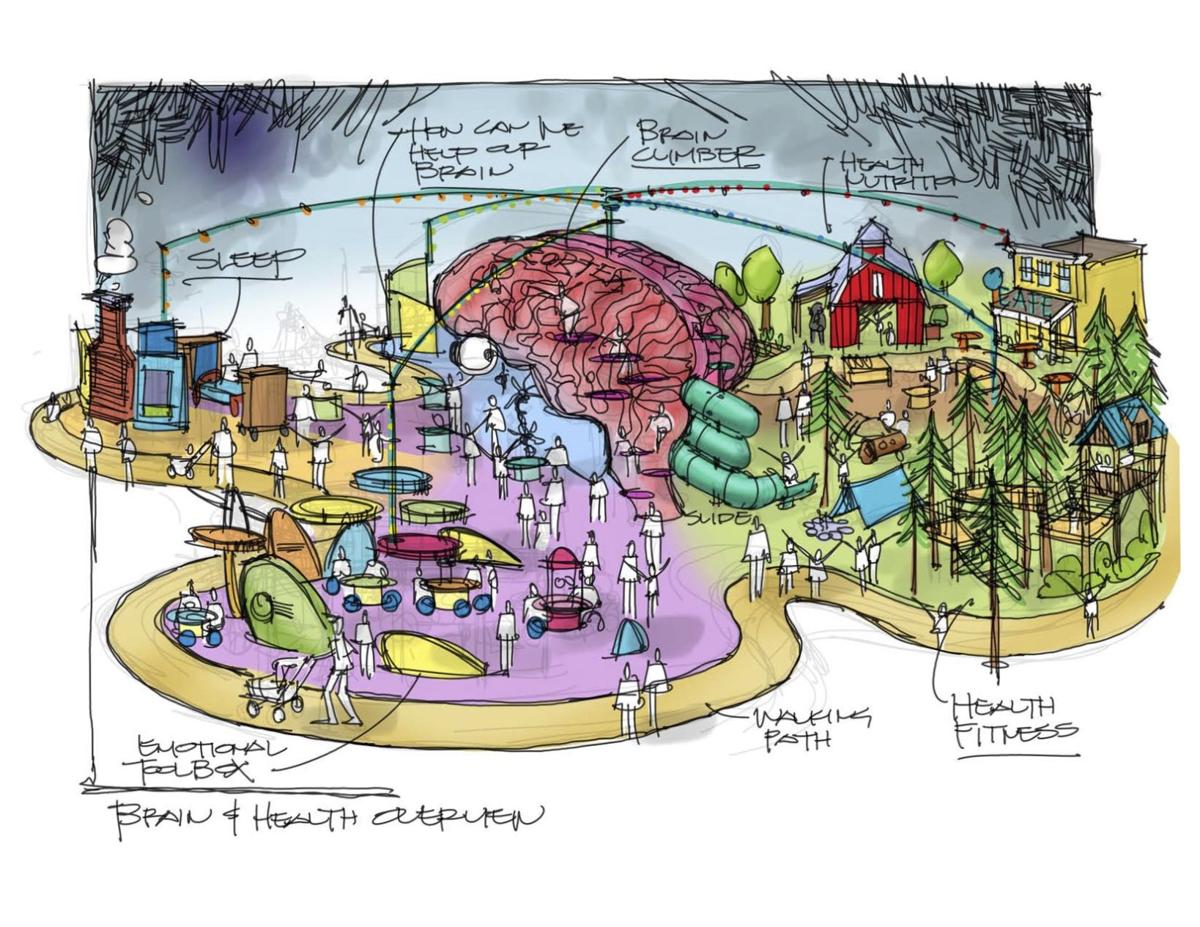 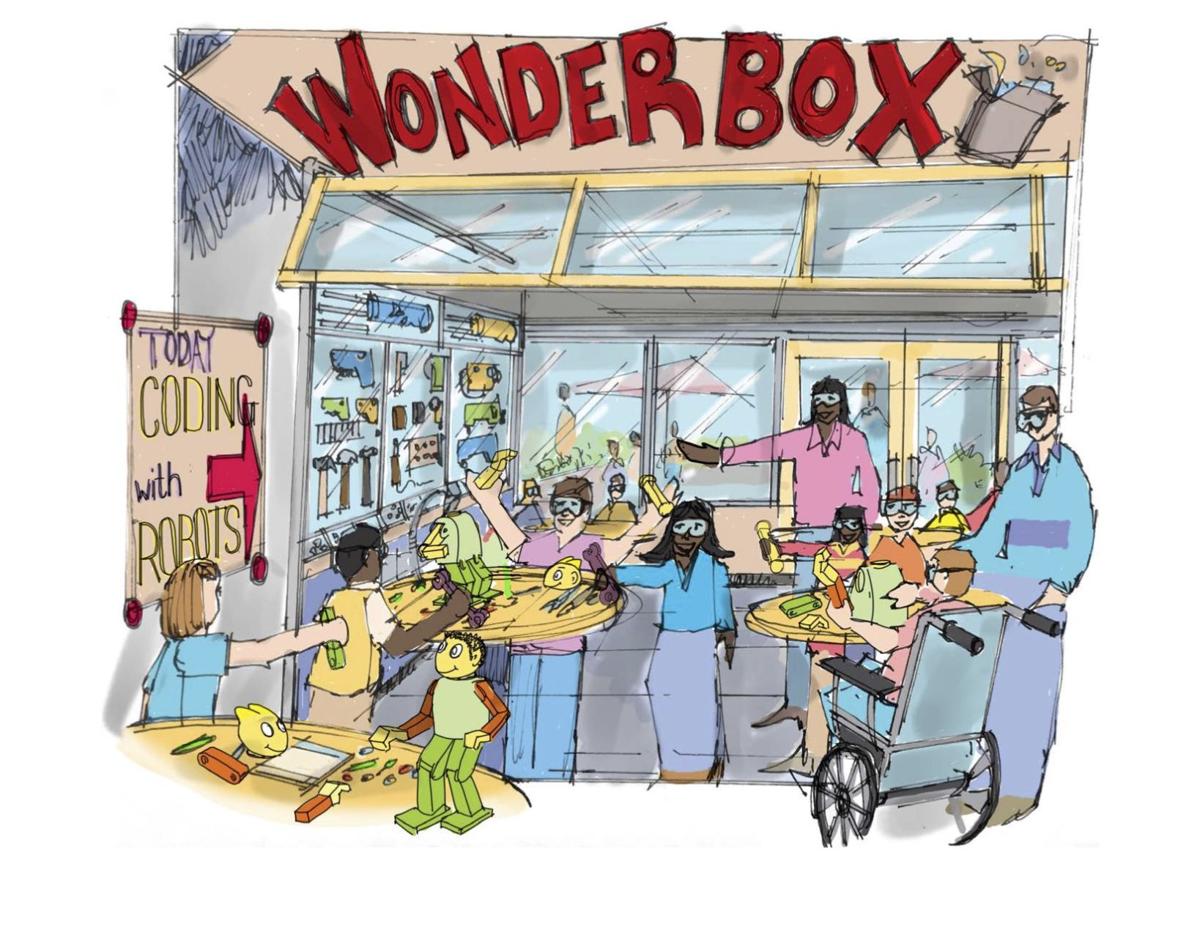 Similar to their older sibling in Jackson, the Children’s Museum in Meridian will offer family literacy programming, Wilson said, and it has already started partnering with local school districts. This programming includes dinner and split activities for parents and students to learn the importance of family reading.

“We want to be able to offer that,” Wilson said. “The parents realize what a difference it makes to their children.”

The museum will reflect Meridian and the surrounding community, thanks to input from various partners, including an advisory committee and organization of volunteers.

“Play is so important to the missions of the Children’s Museum, so we really wanted these exhibits to reflect the community that we’re in,” Wilson said.

To understand what to incorporate into the museum, Meridian native Wilson said that the proposed facility hosted design charettes, or meetings with stakeholders, where community members discussed Meridian’s history with trains, planes and the arts.

“We really leaned on them to reflect what makes Meridian,” Wilson said. “These charettes helped pinpoint what was distinctly East Mississippi.”

Wilson credited the support of the community for getting the project approximately 85 percent funded, or $11.5 million or their $13.5 million goal.

“We are still processing all of our 2018 gifts,” Wilson said. “If our community can continue to be as generous as they have been, we could break ground as early as this year.”

No matter the level of giving, Wilson said being responsible and transparent with donated monies would dictate their path forward.

“One of the things that I’m proudest of is that we’re the number one nonprofit in the state for fiscal stewardship, ranked by Charity Navigator,” Wilson said. “Following that, that will determine when we break ground.”

To reach their fundraising goals, Wilson encouraged the community to donate online to the museum at mschildrensmuseum.org/meridian.

“When we do open, we need the support of our entire community,” Wilson said. “And our community really has been so generous.”