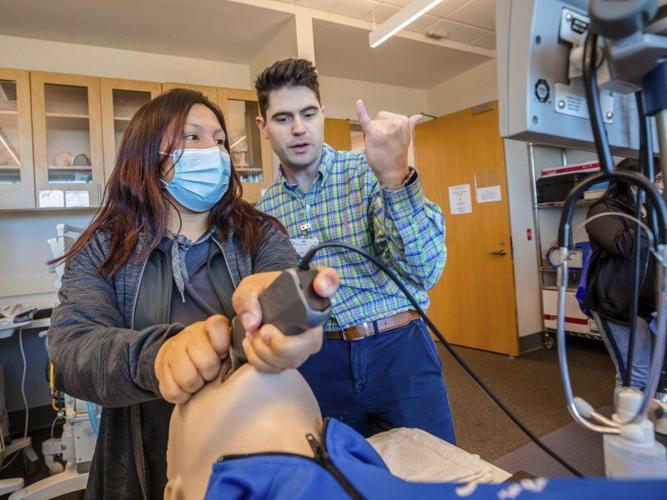 Terrca Hickman, a Choctaw Central High student, intubates a medical manikin, guided by Andrew Shelby, educator in the Life Support Training Center, part of the Simulation and Interprofessional Education Center in the School of Medicine at UMMC. 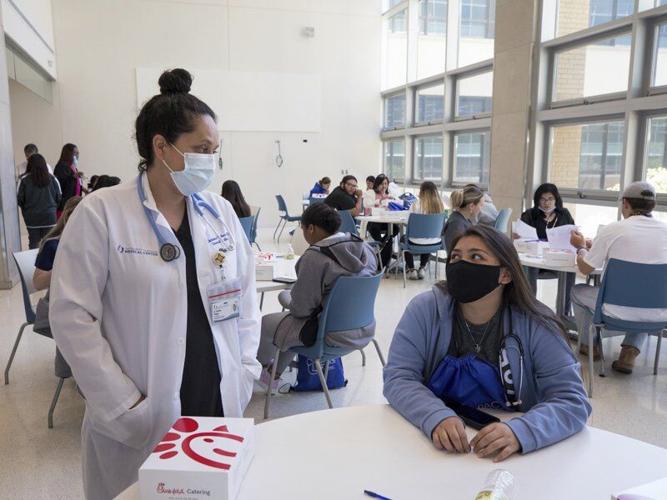 Dr. Christina Wallace, left, an internal medicine resident at UMMC and the first representative of the Mississippi Band of Choctaw Indians to earn a medical degree, is a role model for Choctaw Central High students like Katelyn Taylor, right. 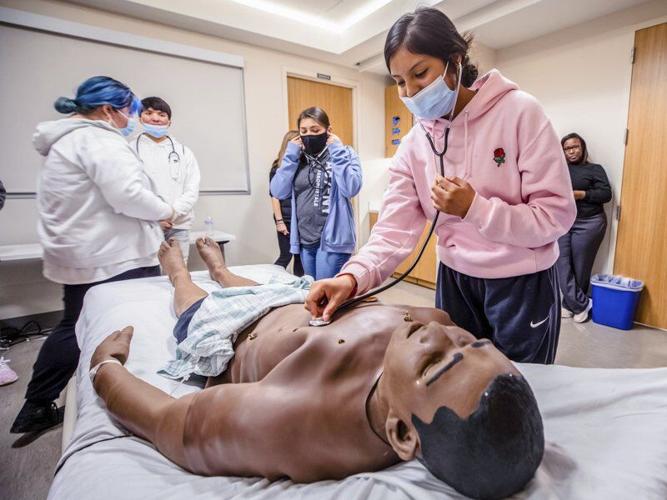 Choctaw Central High student Alexis Thomas makes sure that Stan's heart is still on the job. 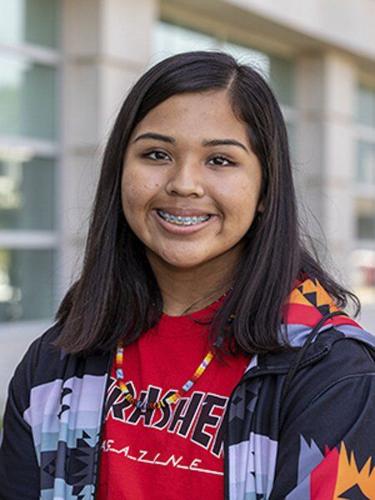 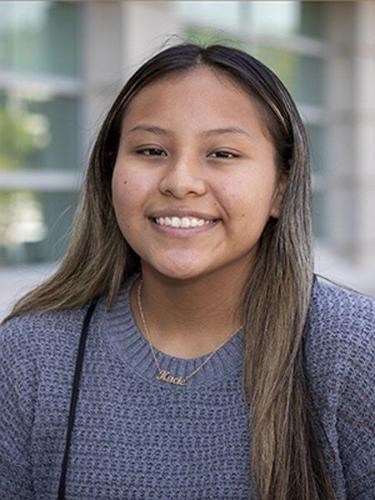 Gripping the handle of a tool resembling a non-threatening scythe, Kacie Wallace inserted the dull blade of the video laryngoscope into a gaping mouth, avoiding the teeth, and slid the tip of the breathing tube into the trachea.

“It was easy,” Kacie said later. “I feel like a natural.”

It was her first intubation, a procedure to help patients breathe, and it was a success – never mind that her “patient,” a medical manikin, couldn’t breathe.

In fact, the intubation demonstration was part of an event meant to, if possible, take Kacie’s breath away, or at least, inspire her: Choctaw Central High School Visit Day at the Medical Center, an opportunity to recruit more Native Americans to health care careers.

Kacie, a Bogue Chitto community resident and Choctaw Central student, was one of more than 20 students invited to the campus recently to be schooled in the rewards of a health career by UMMC faculty and students.

The School of Medicine arranged the visit, with funding from a multi-million dollar federal grant, IMPACT the RACE Rural Track Program, created to help endow rural areas with more primary care doctors; but the event wasn’t limited to the physicians’ training ground.

Besides the medical school, the schools of dentistry, health related professions and nursing – whose students met with the guests during lunch – were able to do their own recruiting.

Dr. Loretta Jackson-Williams, professor of emergency medicine and vice dean for medical education, explained why it was a multi-school endeavor.

“We need an entire health care team to take care of folks,” she said in her welcome to the students. “So everything I say in this presentation has a whole lot of selfishness. Who’s going to be taking care of me when I’m 80 years old?”

That’s a question members of the population group categorized as American Indian and Alaska Native might be asking as well, especially when it comes to the practice of medicine. The group accounts for 1.1 percent of all people living in the United States, but represents only 0.3 percent of active physicians.

This is important because improved health care occurs when patients and those who treat them have similar backgrounds in race, ethnicity and language.

And students with backgrounds which are underrepresented in medicine are more likely to be drawn to underserved communities when they begin their careers.

One such physician is Dr. Christina Wallace, who spoke with the students from Choctaw Central High, some of whom snapped selfies with her.

As a high school student herself, Wallace (no relation to Kacie) explored several college campuses, but none offered an opportunity like this Medical Center encounter, she said. “None were related to health care careers.

“So this is a great experience for these students, seeing what the future can hold,” said Wallace, who grew up in Tucker, one of eight Choctaw Indian Reservation communities in Neshoba County.

When Wallace graduated from the School of Medicine in 2019, she became only the seventh Native American known to have earned a medical degree at UMMC, according to information from the Office of Student Records and Registrar.

And she is the first to earn the MD as a representative of the Mississippi Band of Choctaw Indians, the

Now finishing up her residency in internal medicine, primary care focus, at UMMC, Wallace will begin seeing patients this summer at the Choctaw Health Center in Neshoba County, where she was a patient liaison before studying medicine.

“I hope to be a positive influence for these students,” she said.

“It’s been really good for our students to come here and see all the opportunities in the health care field. They haven’t been able to see a lot lately, especially because of COVID.”

For a few hours on the UMMC campus, they saw, did and heard plenty. Beyond the intubation lesson mastered by Kacie Wallace in the School of Medicine’s Simulation and Interprofessional Education Center, they learned CPR, accompanied by the song, “Stayin’ Alive”.

“That was my favorite part,” said Catherine Jim of Conehatta, who is for now, at least, a future public health nurse or, perhaps, pharmacist.

Still in the SIEC, the visitors watched as Dr. Anna Lerant, professor of anesthesiology and managing director of the SIEC, used cardioversion, a procedure using electric shocks, to treat a heart attack patient – a talking manikin named Stan.

The adventure of Mr. Stan, who lived, was the highlight of the day for Terrca Hickman, another 16-year-old junior from Bogue Chitto. “I’m glad I got to experience this,” said the aspiring pediatrician – or physical therapist.

In the School of Dentistry, where Kacie Wallace hopes to study one day, the students chewed on an assortment of implants, crowns, bridges, fillings and dentures – and met those who make them. They toured an area populated by cone beam imaging and 3D printing.

“This clinic here deals with the future of dentistry,” said Karleigh Williamson, a dental lab assistant and incoming dental student.

They discovered what it takes to train as a dentist, or to get on the dental hygiene track, and, during an oral cancer screening session, how to check each other for swollen lymph nodes.

In the School of Health Related Professions, they came near to acing a Guess Who? game led by SHRP project manager, Kelsey Walker, whose multiple choice questions plugged the array of choices SHRP would let them tap into – medical scribe, nuclear medicine technologist, occupational therapist, physical therapist, radiologic scientist and many more.

They listened to eloquent presentations from two OT students, Lydia Thompson and Raven Jones, and from histotechnology student Kathryn Bennett, who summed up a SHRP-related career this way: “Everything you do, you’re helping someone else.”

As far as that goes, Andreas Jim, is eager to help others as a nurse practitioner. But the Choctaw Central senior, a resident of the Pearl River community, said he was struck by the “wide field of opportunities and positions” he discovered at UMMC.

Does that mean he’s now considering another career as well?

“No,” was his answer. Apparently, his family has done some recruiting of its own: “I’m still set on being a nurse practitioner,” Andreas said, “like my uncle and my aunt.”