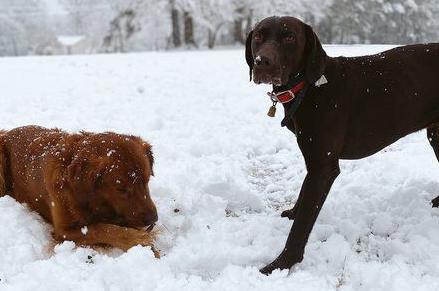 Our golden retriever Murphy and our German shorthair Moose took full advantage of the snow that greeted us this past Monday morning. Their energy level was certainly at a higher level than normal. The snow brought out their “inner puppy,” and it was difficult to keep them inside at any point that day. 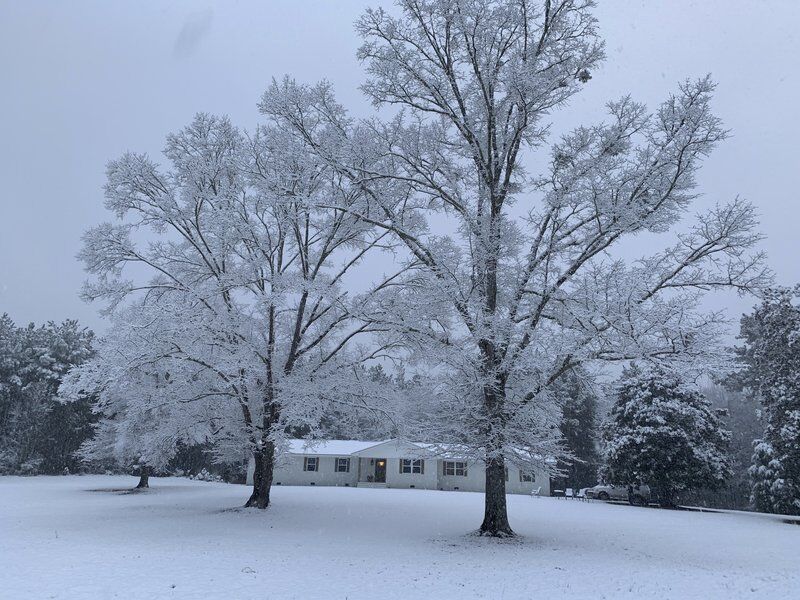 Several friends commented, “It looks like a postcard,” when I sent them the pictures of our farmhouse in the snow. It truly was a breathtaking sight! At top. I can’t recall seeing a more beautiful snowfall in Mississippi. I wished for a white Christmas, and although it came a few weeks late, the beauty (and volume) of the snow vastly exceeded my expectations. 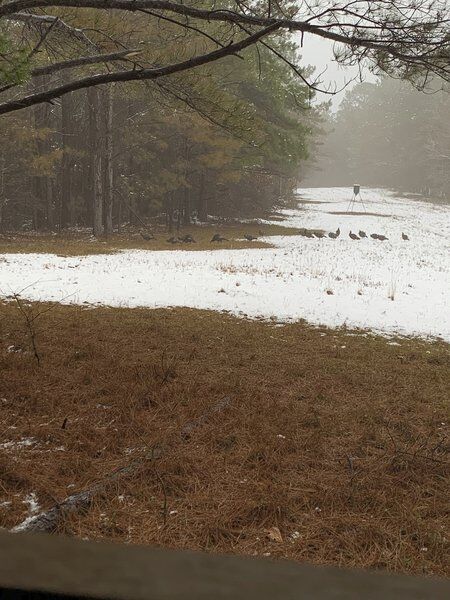 Watching turkeys in the wild is at the top of the list of things that I enjoy. Watching them in the snow was a special treat. Their mannerisms and actions never cease to amaze me and, like my family and my dogs, the snow seemed to take their energy to another level. 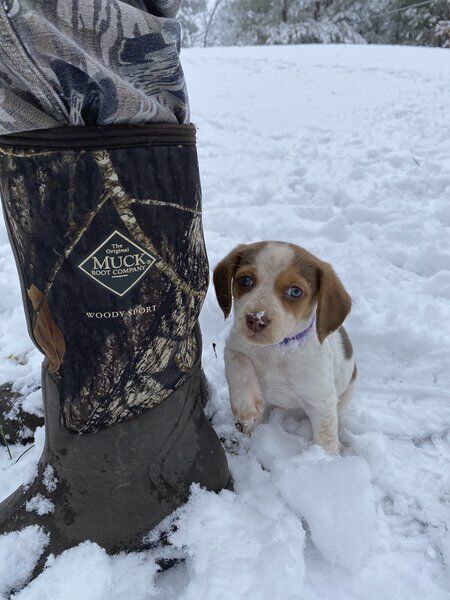 The newest member of our family, our beagle puppy Birdie, took a little while to “warm up” to the snow. However, her desire not to be left out of the fun won out and she joined in on the early morning frivolity. 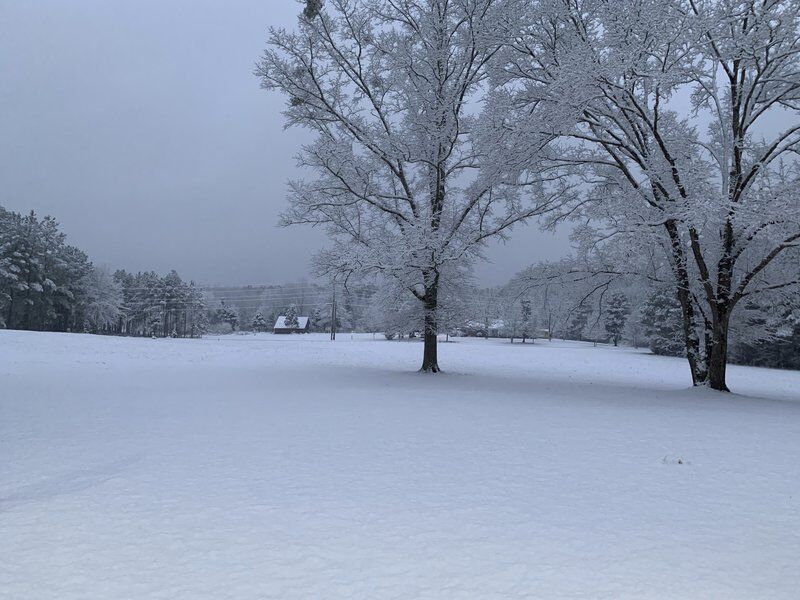 I can’t recall seeing a more beautiful snowfall in Mississippi. I wished for a white Christmas, and although it came a few weeks late, the beauty (and volume) of the snow vastly exceeded my expectations. 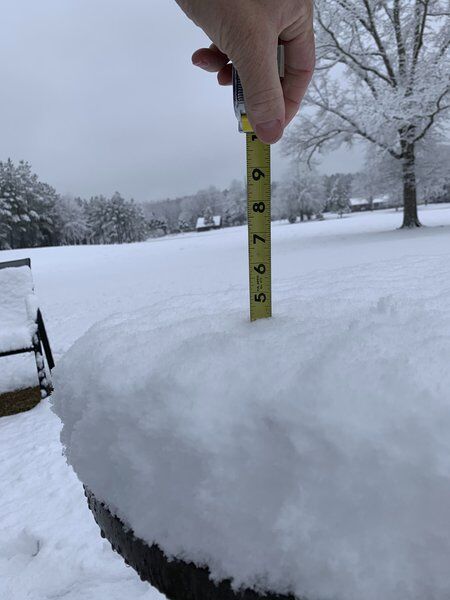 Since I didn’t think that my friends in other parts of the state would believe me about the amount of snowfall that we received, I grabbed my tape measure to document my claim. I never dreamed that we would get almost five inches of snow!

“How much snow do you think we will end up getting?”

To be honest, I was hopefully optimistic (as in the hope of a child for snow), but the “up to 2 inches” that my weather app predicted certainly seemed like a lot. As I headed to bed, my wife, who was on puppy duty Sunday night with our new beagle “Birdie,” told us she would wake us to see the snow when it started.

When she came back to bed after taking Birdie out at 3 a.m., there was no mention of snow. I assumed it had missed us. A few hours later when my alarm beeped at 6 a.m. and I looked out the window, I couldn’t believe my eyes!

I dressed quickly and walked to the front of the house to take the pup out for her morning routine. The snow was falling heavily in huge flakes as I looked for a barren spot underneath the overhanging limbs where she could take care of her business. It didn’t take her long to notice that the ground surrounding her looked different, and she eased forward hesitantly to investigate the change.

Back inside, I boiled some water to make coffee and prepared Birdie’s food as she tugged at my pants. As I poured the water from the kettle into the French press, I heard footsteps coming up the hall. I watched to see the expression on my daughter Tate’s face as she took in the winter wonderland that had developed overnight. We both stared out the front windows in disbelief at the snow covered ground and waited eagerly for G to come out with our GSP Moose and golden retriever Murphy.

I wrote in December about dreaming of a White Christmas, and while the snow’s arrival was a little late, the effect was just as enchanting. In that article I mentioned a theory that I have about snow holding energy. According to my theory, that energy is stored in the snow and is only released when something touches it. I couldn’t wait to take all the dogs out and put my theory to the test.

When G and the dogs emerged from the bedroom and joined us in the kitchen, the shocked expression on her face said it all. “It didn’t look like this at 3 this morning,” she said as she looked out over the front lawn and pasture. “We’ve gotten over 4 inches already,” I said, as we headed for the door with the dogs.

The two older dogs bolted as soon as I opened the door, and Birdie began to whine, not wanting to miss out on any of the frivolity. We watched with smiles as Moose and Murphy canvassed their snow-covered domain. Without a doubt, their energy level was elevated into the “snow energy” range, the word “unbridled” came to mind — my theory seemed to be playing out!

Consequently, I could now clearly see a new energy in my wife and daughter as well. Snow seems to unleash or unearth the inner child (or puppy) in all of us, dogs and humans alike. The energy was palpable, it was electric, and Tate and the dogs took full advantage of it, while G and I headed to prepare for a day of virtual meetings for work.

Throughout those meetings, my “inner child” kept asking “do you think we could get in an evening hunt in the snow?” Having lived all my life in Mississippi, I can count the number of hunts I’ve experienced in the snow using both hands and not all the digits. I’ve always dreamed of hunting the frozen forests of Saskatchewan for giant whitetails, and that’s what my inner child kept envisioning as I worked throughout the day.

My afternoon schedule included a company webcast from 3 to 4:30 which, I reasoned, would provide the perfect opportunity to head to the stand in the “Big Field,” which was equipped with a small propane heater that would keep me warm and keep my electronics from freezing while I watched the livestream.

As I settled into the blind for the late afternoon hunt, I looked out over the thick layer of snow that blanketed the food plot before me and thought of those Saskatchewan dreams. Soon, the field was alive with activity as a flock of wild turkeys began to filter out of the woods. I watched them throughout the afternoon as I waited, hoping for a mature buck to step out.

Just before dark, I heard footsteps coming from the woods behind the blind and heard a buck grunt. Soon, several does crossed the field with the buck trailing behind them. I reached for my grunt call to try to stop him, but he paid me no mind as he continued his pursuit. I could only watch as my dreams of a “Saskatchewan giant” vanished into the wood line.

As hunters in the Magnolia State, it is not often that we get to enjoy a hunt in the snow, and this one will always be a favorite memory: The day Canada came to Mississippi. Until next time, I look forward to seeing you out there in our great outdoors.