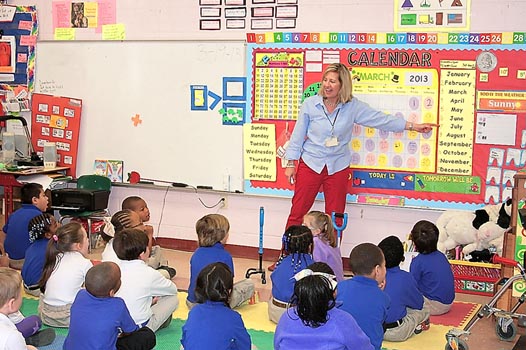 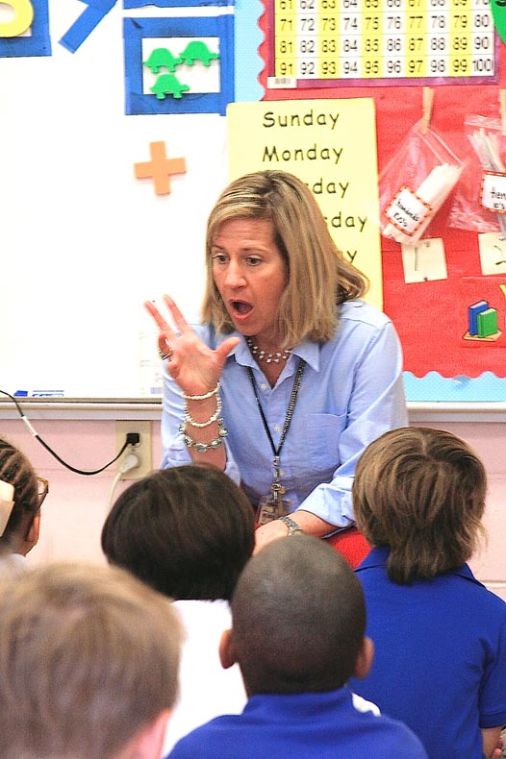 A teacher's efforts to help a student with special needs has won her the Golden Apple Teacher of the Month award.

Beth Lang, a kindergarten teacher at Poplar Springs Elementary, has been teaching for 19 years; 14 of those in kindergarten. She was honored in a surprise ceremony Tuesday at the school.

Claire Hasselle, whose daughter is in Lang's class nominated her for the Golden Apple award. Her daughter Katie has has cerebral palsy and is also hearing impaired. She went to Magnolia Speech School in Jackson for four years and just this year mainstreamed into Poplar Springs, Hasselle said.

"We were really nervous about how the transition would go for her, how the kids would receive her and how her teachers would handle the challenges," Hasselle said. "The minute I met Mrs. Lang, she didn't see any of it as challenges. She turned it into an opportunity to teach these kids how to serve each other and how to love each other."

Her daughter has flourished under the care of Lang, Hasselle said.

"This classroom is an environment of giving and love. It's amazing. Her energy level is through the roof with positive energy. She goes above and beyond to take care of her students during school and later on,"  Hasselle said. "She has called me at night, on weekends, because she thinks of an idea that might supplement Katie's learning. She's always thinking of ways her students can be benefited. It's for all of her students. She's always trying to find ways to intrigue them, to excite them about learning. The kids are in love with her. You can tell it when you walk in the room."

Participating sponsors of the Golden Apple Award read nomination letters each month and make the selection. The winner gets a "Golden Apple" trophy and a voucher for $1,000 in school supplies, a $300 check and the chance to be named the Golden Apple Teacher of the Year in May. The winner also will have the opportunity to nominate a graduating senior for a scholarship.

"It was really humbling. I was really caught off guard but I'm so pleased that our school has been recognized and that so many community stakeholders have given of their time and funds to help support education in Meridian," Lang said after receiving the award.

"Mrs. Lang is a great teacher," Taylor said. "She's very enthusiastic and compassionate about her kids, so she is very deserving of this award."

Kindergarten is a great age to to teach because they are happy to learn, she said.

"With kindergarten students, they are just so excited about coming to school and they are like sponges, they are ready to learn and absorb everything that you share with them," Lang said.

That is especially true, she said, of literacy and writing.

"We start out at the beginning of the year learning our letters and by this time of the year, the fourth nine weeks, a lot of our students are writing their own stories and they are reading. It's just a great reward for me to see those students how they blossom throughout the year."

Lang said it is important to establish a family atmosphere in her classroom. Like other families, she said if there is a conflict, they sit down and work it out together.

"If I have that kind of atmosphere, it is risk free for my kids and I think that's why my kids are doing so well academically, because it's a risk free environment," Lang said.  "I like for my children to be able to be free to explore on their own."

"It's actually performing and letting the students create. The students get to read about it, then express themselves through dance, drama, the visual arts and music," she said.

At the end of the year, Lang said she doesn't cry when her students move on, but she does keep up with their progress.

"It's kind of a bittersweet situation but I do go back and check on those kids in the first grade," she said.

To nominate a teacher, go to either meridianstar.com or wgbctv.com and click on the Golden Apple logo. One teacher will be awarded each month and a teacher of the year will be selected in May.

Nominations can be submitted by parents, faculty, or community members as well as past and present students.

Candidates must be a current, full-time, faculty member in a public or private school system who are working within the following counties: in Mississippi — Lauderdale, Neshoba, Kemper, Clarke, or Newton counties. In Alabama — Choctaw and Sumter counties.

The nomination process consists of an essay of no more than 500 words detailing why the person should be considered for the Golden Apple Award.