The parents of Christian Andreacchio, a Meridian man who died in 2014, have filed a civil lawsuit against Meridian's chief administrative officer, accusing him of sharing their son's autopsy photos.

Police ruled the 21-year-old's death a suicide, but his mother has said the family has reason to believe he was killed.

“For reasons unknown, he became deeply determined to convince a now skeptical public that Christian Andreacchio did, in fact, commit suicide,” the lawsuit states.

In 2017, a Lauderdale County grand jury decided not to indict two people in connection with Andreacchio's death.

The Andreacchio case has received national attention, due in part to a popular podcast, “Culpable,” which included information gathered from the Andreacchio family, friends, law enforcement and private investigators. In September, the podcast's creators announced a reward of up to $100,000 for new information leading to a conviction. 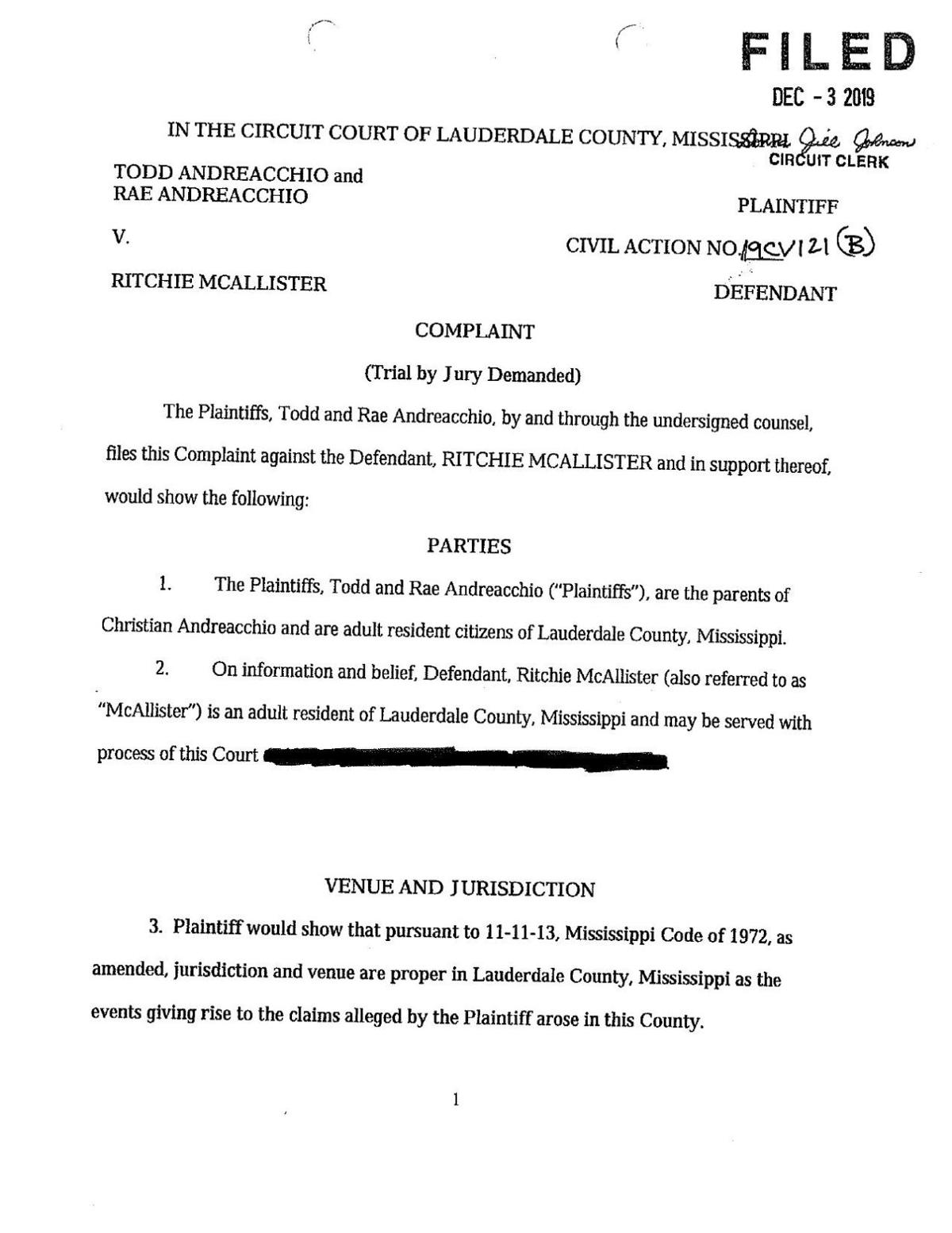 According to the parents' suit, McAlister invited people to visit his office to view the autopsy photos who “were then subjected to McAllister’s (sic) analysis of the photos that led him to conclude that Christian Andreacchio took his own life.”

“His reasons for these extreme efforts are unknown to the Andreacchios, but they now must endure daily the knowledge that the graphic evidence of their most private and personal grief has simply become Ritchie McAllister’s (sic) public water cooler,” the lawsuit states.

The complaint calls for a jury trial.

Ward 5 City Council Member Weston Lindemann attempted to remove McAlister's salary Tuesday, based on concerns about an audio recording that was posted and shared online this week.

Lindemann said later that he was referring to a recording that appeared to be of McAlister threatening violence against Lindemann and discussing photos related to Andreacchio's death.

The Meridian City Council passed a resolution last month requesting the U.S. Department of Justice open an investigation into the Andreacchio case.

Messages left for McAlister by The Meridian Star on Wednesday and Thursday were not returned.

Rae and Todd Andreacchio also filed a lawsuit Tuesday against Frankie Wagner, a resident of Hattiesburg.

The complaint accuses Wagner of uploading Andreacchio's autopsy photos online and “a personal effort to encourage local individuals to discount the theory of homicide.”

Reached by phone Wednesday, Wagner denied uploading the photos online, but said he had shared the file with friends.

“Anything that is obtained through a Freedom of Information Act request is public record,” he said.

Wagner said the state of Mississippi has its own discretion to release the files and photos.

“I look forward to going to court with them,” Wagner said.