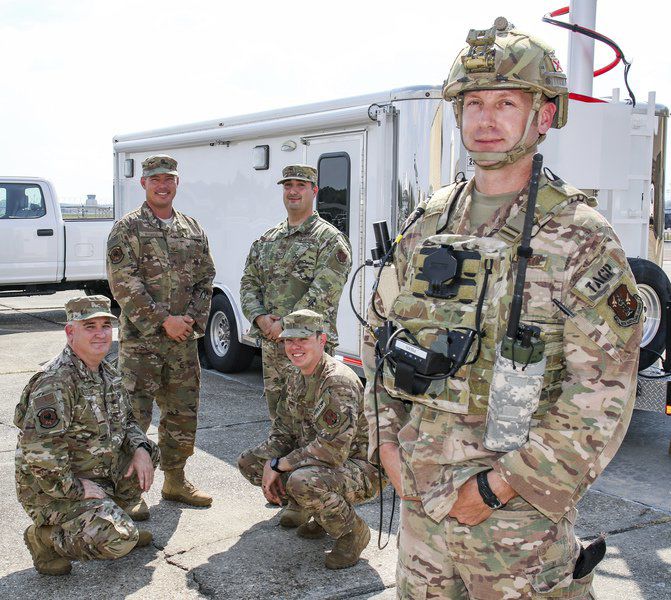 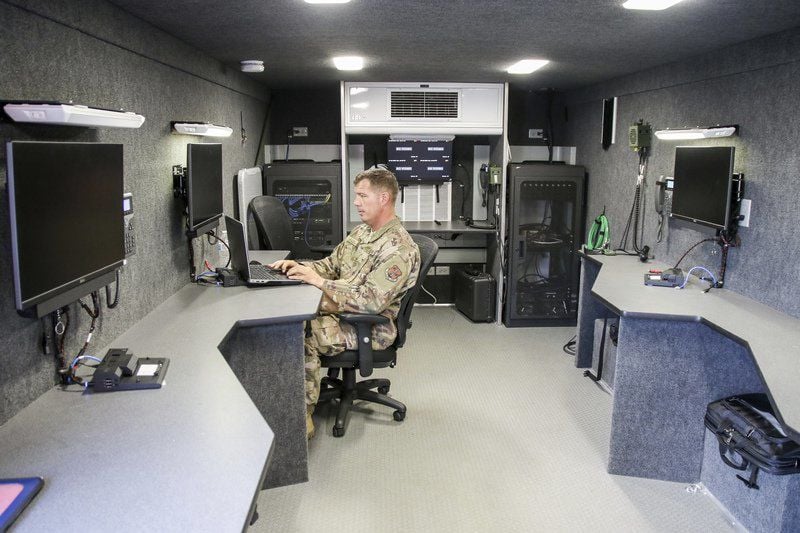 Master Sgt. Cody McCarra of the Mississippi Air National Guard works out of a mobile communications trailer as part of a Meridian-based team of specialists. The team helps civilian and military personnel communicate with aircraft during hurricanes and other disasters around the country. 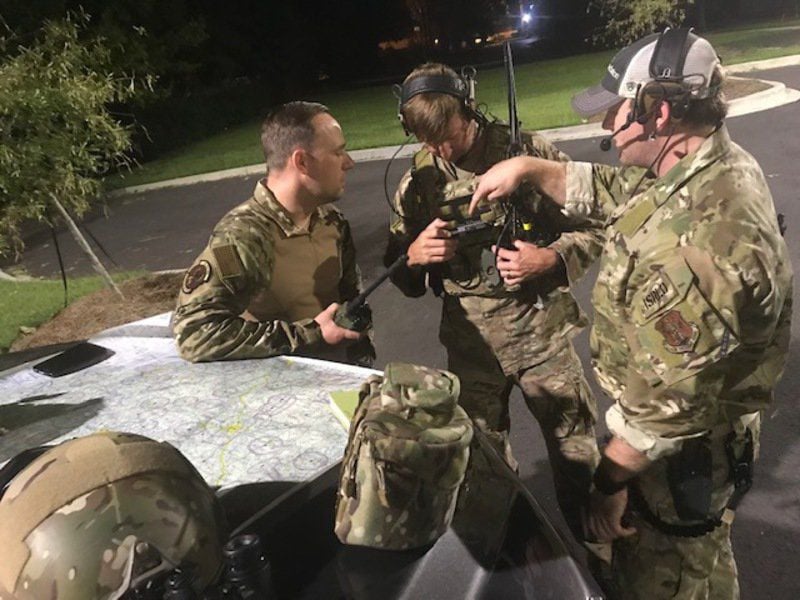 Tech. Sgt. Ken Gurganious, Master Sgt. William Defoor and Capt. Adam Wright of the Mississippi Air National Guard in Charleston, South Carolina for Hurricane Dorian. The guardsmen are part of a team that responds to disasters around the country, assisting with aircraft communication, damage assessment, and search and rescue operations. 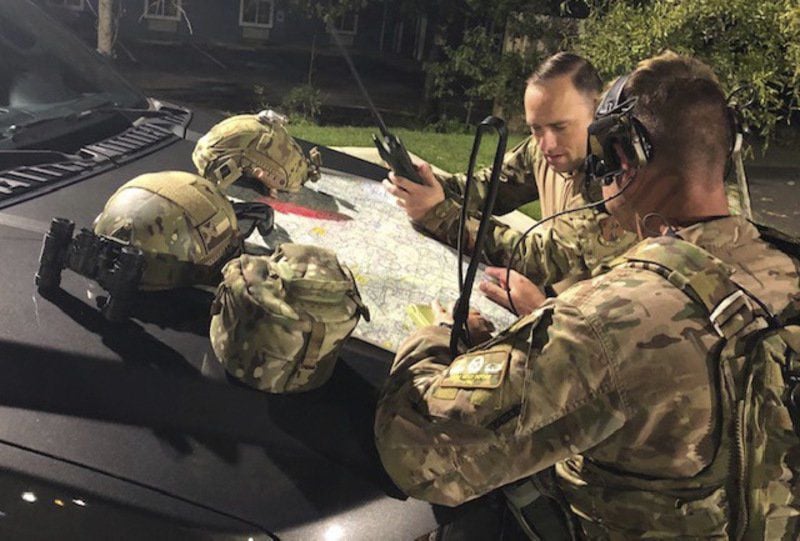 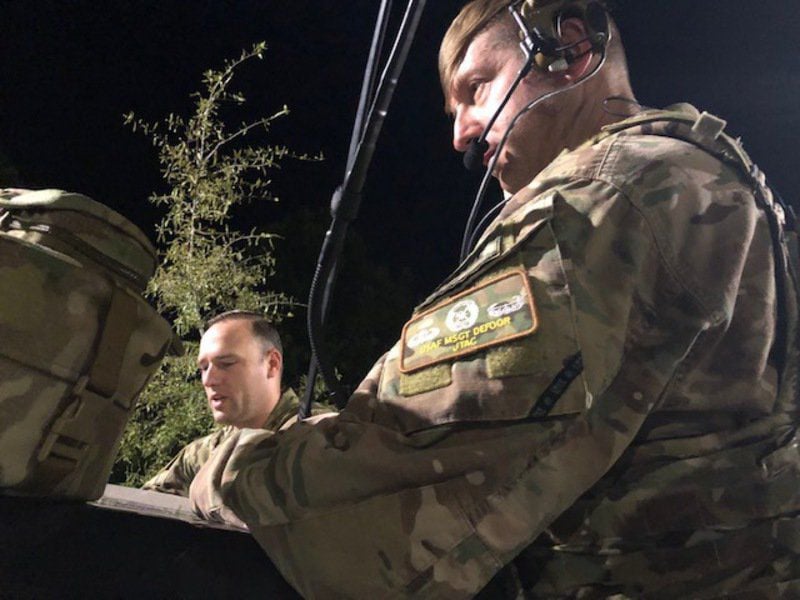 Tech. Sgt. Ken Gurganious and Master Sgt. William Defoor of the Mississippi Air National Guard in Charleston, South Carolina for Hurricane Dorian. The team is part of the 186th Air Refueling Wing, based at Key Field in Meridian.

His family lost two properties on the coast and like many others across the state, was stranded without power for weeks at home in Jackson.

“We had the Army in my neighborhood handing out food and water because you just couldn’t get anywhere," he said. "I remember as a younger kid, seeing the Army there and helping out and how that felt."

Fourteen years later, Wright is the officer in charge of a specialized disaster response team based at Key Field in Meridian that deploys around the country, helping state and local agencies prepare and recover.

The ground support team from the Mississippi Air National Guard's 186th Air Refueling Wing is the first of its kind, Wright said.

The members have responded to hurricanes, tornadoes, wildfires and other disasters over the past four years.

Two to three days before a storm is expected to hit, the guardsmen are on the ground with everything they'd have in combat besides weapons and armor, Wright said.

“You have civilian agencies and you have federal agencies that don’t necessarily work with aircraft that often,” Wright said. “We come in with the expertise of knowing how to work with those aircraft and having special search and rescue backgrounds and other kinds of backgrounds to help them use the aircraft effectively.”

The guardsmen use a system that allows them to talk to military and civilian air crews, gather information on damaged infrastructure and help rescue storm victims, according to Master Sgt. William Defoor.

"We realized early on that there’s a huge language barrier between the civilian entities and the military entities," said Lt. Col. Ab Germany, the director of operations for the team.

In many cases, the people from state and local agencies may be responding to disasters that have damaged their own homes, he said.

"They are very thankful," Germany said. "The feedback that we get is always glowing and overwhelmingly positive."

The team worked during Hurricane Irma in 2017 and last month, five guardsmen responded to Hurricane Dorian.

The initial plan was to drive to Florida, but Dorian's track changed and the team got a request from South Carolina's Air National Guard headquarters, Wright said.

"Within six hours of the request, we were on the road," he said.

The guardsmen trailed aircraft and checked on neighborhoods, making sure bridges and roads were safe, Wright said.

The team’s technology allows it to see what aircraft can see, but from the ground.

Maj. Jonathan Thompson, with the South Carolina Air National Guard, credited the team with giving a clear picture of the hurricane's impact after night fell.

"They were able to, on a computer system we have, update those things ... so that we and the emergency management division could see a real-time update of what they were seeing," Thompson said.

The team drove to storm-damaged parts of Houston, freeing up aircraft with a limited amount of fuel to fly to places harder to reach, Wright said.

"We had to send in planes ... and help the Coast Guard know where to get them out of their houses and get them on to buses and Humvees, just driving them out of the flooded areas,” said Senior Master Sgt. Brad Slocum, who spent two weeks in Texas. “It was nice being able to help them.”

This summer, one of the members traveled to Alaska to help firefighters battling wildfires.

“We watch the fires coming at them and make sure they don’t get overrun by the fire,” Wright said.

When the guardsmen are not training for disasters, they train air crew and work on other domestic and warfighting missions, Wright said.

"When hurricane season hits, that shifts to our number-one priority," he said.

Wright said he would like to grow the team, which currently has no more than nine members at any given time.

"If we can be there in time to look at something, and make sure the aircraft are looking at the right areas, it can save lives."