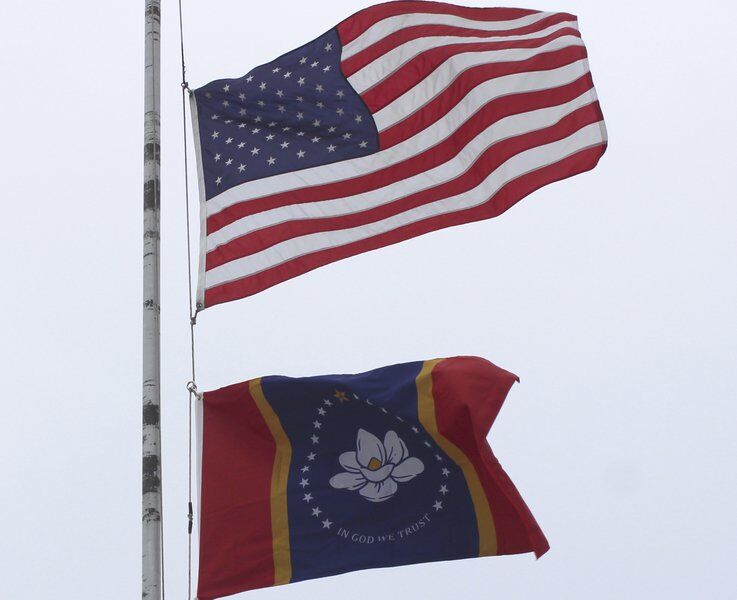 The new Mississippi state flag, adorned with a magnolia and the phrase, “In God We Trust," flies over city hall in Meridian on Monday, Jan. The flag was adopted after state legislators retired the old flag, which was the last state flag in the U.S. to include the Confederate battle emblem. 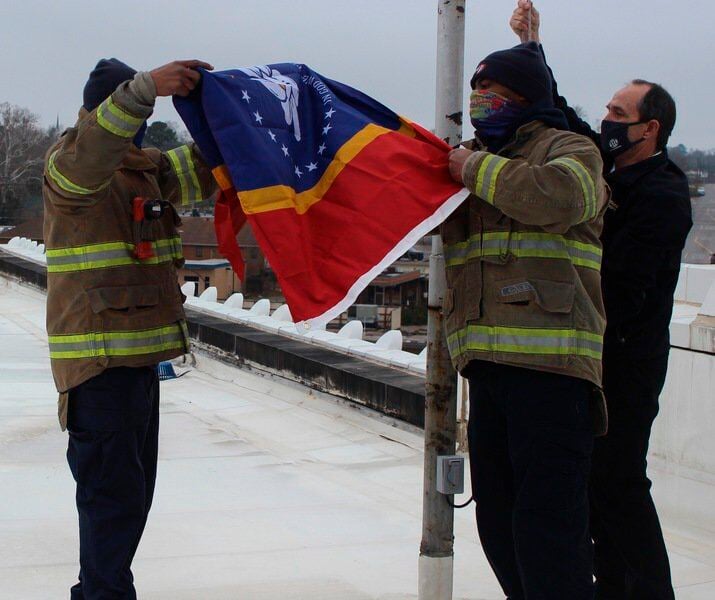 A crew of Meridian firefighters hoist the new state flag over city hall on Monday.

Meridian firefighters raised a new state flag with a magnolia blossom above City Hall on Monday.

“It was a special moment,” said Briton Brassfield, one of the firefighters who raised the new flag.

The ceremony included a prayer by Pastor LoVell Mosley in the City Hall auditorium and the raising of the flag on the building’s roof.

The state had been without an official flag since late June 2020, when the legislature voted to retire the 1894 flag, which contains the Confederate battle emblem.

An appointed commission decided on the new design for the state flag, according to Mississippi Today. Mississippi voters approved the flag design in the November election, but the legislature still had to pass a law to make the state officially adopt the flag.

Peter Malone, another firefighter who helped hoist the flag in Meridian, described Monday as a “pretty joyous” day. Malone likes that the people of the state got to vote on the flag.

“People got an actual chance to vote on it, and now we actually see that our voices and our votes do count,” he said. “They do matter.”

“We’re glad today that we can move forward with a flag that’s symbolic of something that we all can stand behind and be proud of,” Bland said, “and bring a new hope, a new energy to our city, to our state and to communities all across the state of Mississippi.”

Both the American flag and Mississippi flag at City Hall are being flown at half mast in memory of the two U.S. Capitol Police Officers who have died since the attack on the Capitol last Wednesday, Bland said.

“It is done with the hope that we can work together and serve one another,” Reeves said in a Facebook post. “We need to come together in this country. We need to remember that we are one nation. Under God. Indivisible.”