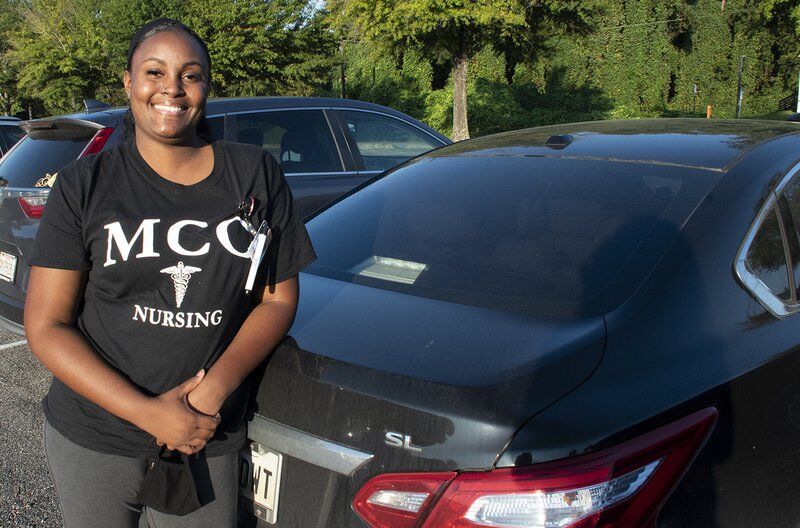 Latasha Cooper pauses before going into her MCC Associate Degree Nursing Program class. The student commutes to MCC from her Louisiana home. 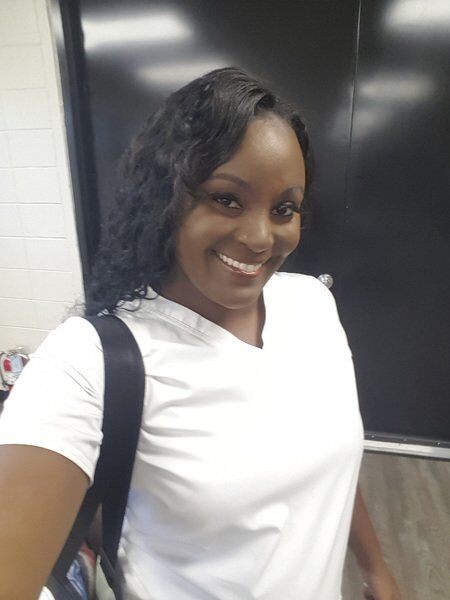 Latasha Cooper lives in St. James Parish, Louisiana, about 45 minutes outside of New Orleans. It takes her four hours to drive from her home to the MCC campus and, yes, four hours returning home. It’s a task that she does five days a week.

To say Latasha Cooper is driven would be an understatement.

The fourth-semester Meridian Community College Associate Degree Nursing student is nearing the finish line to her next career achievement. “It’s always been my goal to become an RN. But I’m that type of person who has to take baby steps. I have to take it a step at a time,” she said.

One could say she’s taking it a mile at a time.

Cooper lives in St. James Parish, Louisiana, about 45 minutes outside of New Orleans. It takes her four hours to drive from her home to the MCC campus and, yes, four hours returning home. It’s a task that she does five days a week. “For the first semester, it was kind of a struggle. But at the same time, it wasn’t. Because one of my jobs on the side is that I’m a travel licensed practical nurse,” Cooper said.

For 15 years, Cooper has been an LPN, and she admits she has done just about a little bit of everything in that arena – geriatrics, pediatrics, med-surg, school nurse. So, when she felt it was time to move forward, she began applying to nursing schools nearby. “It seemed like I was always put on a waiting list,” she noted. After talking to a friend who earned her associate degree in nursing from MCC several years back, Cooper decided to apply to MCC.

“I was driving on the interstate one day with my daughter, and I’ll never forget. The MCC ADN advisor called and asked if I was interested in getting in the program, and I was like, no hesitation,” Cooper said.

The 34-year-old is mom to three children who she says have full extra-curricular lives. One is in dance, another is high school majorette, and another is on the swim team. “I’m a parent who doesn’t want to miss anything. I’ll come to school, handle what I need to handle, and I’m coming straight back home to participate or go to their functions,” she said.

While on the road, though, Cooper listens to her recorded lectures that she connects through her 2016 Nisan Altima’s audio system. When she first bought her car, it had 40,000 miles on it; today’s odometer is ticking toward 200,000. She noted that classmates call her knowing that she’s driving on the road and they’ll talk and study while the miles drift away. “I give big thanks to them,” she said.

Cooper works weekends when she’s not on the road or in class or clinicals. Her full-time job means she’s committed to 16 hours each Saturday and Sunday. “I do get to study on my breaks, and when there’s downtime, I seclude myself in the nurses' station and study,” she said.

It hasn’t always been a smooth journey. “I feel like I’ve run into a rock every semester,” she said, noting that her grandfather, great-grandmother, and aunt died in the past three semesters.

For the Fall 2021 semester, Cooper encountered and endured Hurricane Ida, one of the largest storms to impact Louisiana in recent times. “The instructors kept checking on me to make sure I was I was good,” she said. Cooper’s home suffered damage and there was no power for almost a month. Still, Cooper’s determination for a better life drives her.

“I want to do this because I love being a nurse. That’s my passion. On the flip side of that is I’m doing it for my kids. I’m a single parent. It’s me who has to keep the boat afloat. So, it’s for them,” she said.

MCC ADN Instructor Lisa Jenkins, one of Cooper’s teachers, said Cooper is prepared for class daily and in clinical she is very knowledgeable, professional, and committed to excellent nursing care.

“Driving daily from the New Orleans area to be in class by 8 a.m. and clinical by 6:30 a.m. shows commitment,” Jenkins said. “Being in class the first day back after the hurricane after losing power, leaving her home with her children, staying with a relative (whose roof was leaking significantly) shows commitment.”

Jenkins added, “I have never heard her complain about anything or anyone. I am so thankful Latasha chose MCC to further her education and achieve her goals.”

What’s down the road for Cooper? Two areas in nursing spark her interest. “I like surgery. My ultimate goal is to work in the intensive care unit and get critical care certified.”