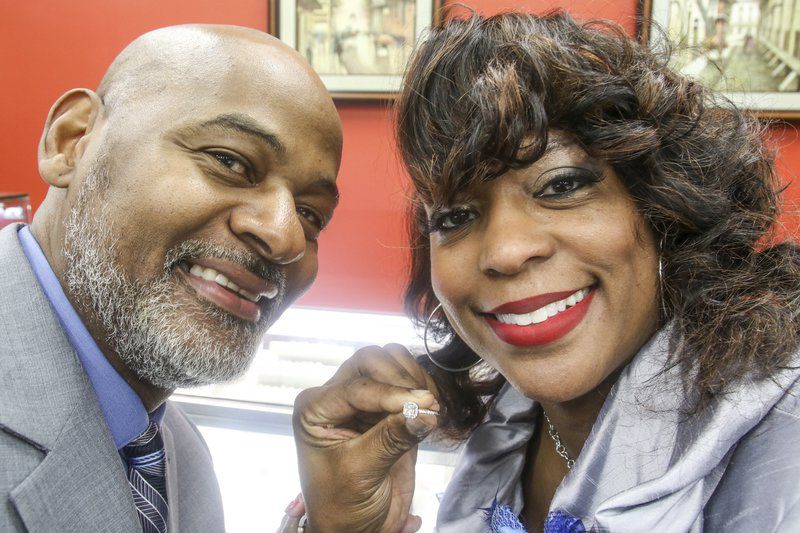 Samuel Nicholson holds the ring his fiance' Eraina Smith had shown him in a picture. 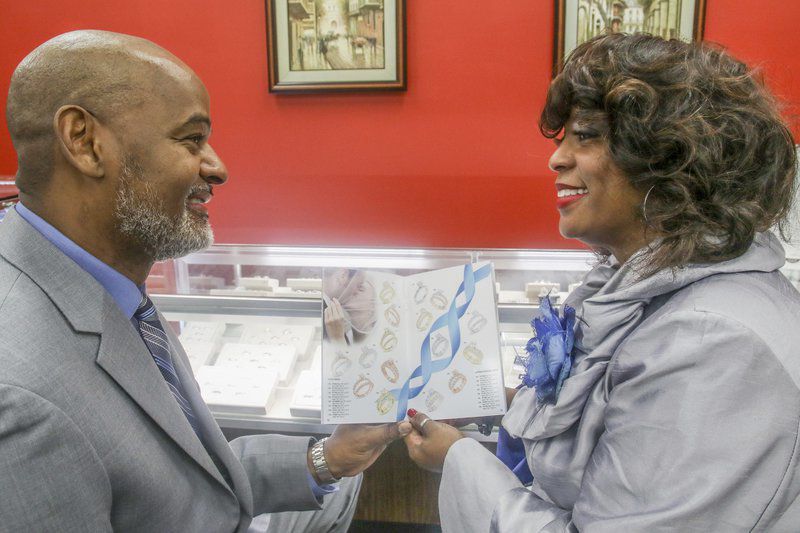 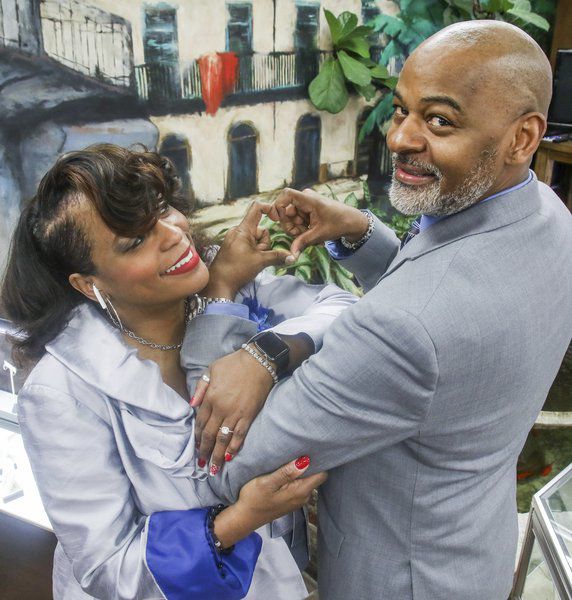 More than 20 years after ending their relationship, Eraina Smith and Samuel Nicholson, both of Chicago, Illinois, have reunited and will marry in April in Marion, where Nicholson has family roots.

There is a familiar saying, “If you love someone, set them free. If they come back, they’re yours; if they don’t, they never were.”

The first parts of that phrase could very easily describe the love shared between Eraina Smith and Samuel Nicholson. The two met in Chicago, Illinois, in November 1992, dated, then broke up two years later.

Both married other people and continued to live in Chicago, but did not have contact with each other.

“I thought of him every day; I loved him,” Smith said, her words carrying great conviction.

Nicholson said he often wondered through the years what their lives would have been like had they stayed together.

“It wasn’t that I wasn’t happy in my marriage, but she (Eraina) would cross my mind often,” he said.

A little more than 20 years after departing ways, Smith and Nicholson would meet again.

“Unfortunately, we met again at my dad’s funeral,” Nicholson said. “The amazing thing is I wasn’t expecting to see her. And when I heard her voice, I knew immediately it was her.”

On April 25, the couple will unite as husband and wife in an outdoor ceremony on the home grounds of the Coleman family in Marion.

“It’s going to be held a few days before his grandmother’s (Cynthia Radford Coleman Friend) 105th birthday,” Smith said. “His grandmother, as well as his mother and father, who are both deceased, walked those same grounds and we’re having it on those sacred grounds.”

The beginning … and end

Smith and Nicholson met in November 1994 at a Chicago church — she was 27 and Nicholson was 30. The couple dated for two years and fell in love. Their affections ran especially deep for Smith.

“I don’t think he realized how much I loved him,” Smith said of Nicholson.

Nicholson played keyboards as well as performed vocals in a band called Ultimate Concept. The group opened for well-known R&B artists and groups such as Isaac Hayes, The Spinners and The Temptations. The band’s popularity would have a profound impact on the couple’s relationship and eventually lead to their demise.

“Ted (the name Smith affectionately calls Nicholson from his middle name, Theodore) was such a handsome man. Not only did I love him, but other people loved him, too,” Smith said. “We were young, and at 27 I wasn’t prepared for his good looks and all the fans.”

“Some people say our love story is like a fairytale. I don’t know if that’s quite true, but I thank God for it every day."

As a result, Smith and Nicholson grew apart.

“Although I knew I would never love anyone the way I loved him, we respected our decision to move on,” she said. “I always knew that I loved him – he was the love of my life and I thought about him all the time.”

Smith pursued a career in engineering, and Nicholson worked for the Illinois Department of Corrections. And though they lived in the same city, for Smith the thought of contacting Nicholson was never a consideration.

“I am a lady of virtue; I was married and there was no reason for me to call him (Nicholson),” she said. “Ted was married and had a beautiful wife. Although he was the love of my life we never contacted each other.”

As when Smith and Nicholson met, the couple reunited in November — in 2016 — and in a religious setting — a funeral.

“Not only was he someone I loved as a companion, but he was also a friend. And that meant so much to me,” she said. “I wanted him to know I was there for him, and that it would be fine. At that time, he didn’t even know how close I had been to his dad.”

During the course of their conversation, Smith learned that Nicholson’s wife was terminally ill.

“Teddy was her caretaker and that made me love him more,” she said. “Oftentimes when women are ill men leave; they are not built to care. He took care of his wife, and that meant so much to me.”

From that moment, a friendship began to build between the two.

“From that day on Eraina has been one of my biggest supporters,” Nicholson said. “My wife was terminally ill and she was there for me as a friend. That never stopped her from supporting me; she had my back.”

When Nicholson inquired about Smith’s marriage, she decided not to let him know she was divorced until some time later.

“I told him my marriage was great because I didn’t want to share it,” she said. “When his wife passed, I told him about my divorce. We got together because we were friends. I think that’s what makes this so special to me. We are friends.”

As the years continued, Smith and Nicholson’s friendship evolved into a relationship.

“I knew that I loved him and knew that we would possibly get married,” Smith said. “I wanted to, but didn’t know when that time would come.”

A trip to Mississippi would be the moment of truth.

The couple first stopped in Jackson, then Meridian. Smith said she immediately fell in love with Mississippi’s Southern hospitality.

“I just couldn’t believe the enormous amount of love that was given – I felt so welcomed,” she said. “I was reluctant to come to Meridian because I just knew it couldn’t be topped. But when we got here, the first stop was at Uncle Norman’s (Coleman) house. When we pulled up he was in the driveway greeting us. Chicago people don’t come out, they wait for you to ring that bell. I met the aunts, who were just so warm.”

“Even at her age, she was in her right mind most of the time,” Smith said. “She was jovial and had the ability to crack jokes. It was so amazing, and she was so loving and kind. I took in the entire area — the home, the land, the son that was there for her, and the aunts and uncles. It was kind of overwhelming for me.”

A watchband and a proposal

While driving to Mississippi, Nicholson’s watchband broke. Upon their arrival in Meridian, he Googled a jeweler and LaBiche Jewelers came up.

“They were just so kind, and at the time we had no idea we were dealing with the owner, Liz,” Smith said.

While there, Smith looked to see if the jewelry store had a ring similar to one in a picture she had given to Nicholson.

“I just wanted him to see it in person,” Smith said.

Unfortunately, the jewelry store did not have the ring. Nicholson purchased the watchband and as they were leaving, the store owner asked for his telephone number.

Thanksgiving was the next day and the couple along with other family members gathered at the home of Nicholson’s grandmother.

“When we arrived at his grandmother's home, tables were set up and everyone just kind of filtered in,” Smith said. “The home, which is ranch style, is so beautiful. Every room of the home had flowers; I love flowers because they signify life.”

Smith said she was informed they were going to do open-mic, and she was to be first to get up and talk about how she and Nicholson met.

“While I was telling the family about our story, they all looked just so interested,” Smith said. “Every time I got ready to sit down, Uncle Norman would graciously step in front of me.”

Next, it was Nicholson’s turn to tell the story of how the two met.

“I thought, ‘I just told the story. Why would they want Ted to tell it again?’” Smith said.

Little did she know, Nicholson had a ring: The one in the picture she had given to him.

“As he approached me, I looked at him and before he opened his mouth, I knew,” Smith said. “He knelt down and said, ‘I lost you over 27 years ago and I will never lose you again.’ I could barely stand. And as you looked around, the crowd was passing out tissues.”

A husband, a family and a new place to call home

The morning after the proposal, Smith told Nicholson she wanted to get married in Marion because it was where she felt loved the most.

“My parents are deceased and so are my grandparents,” Smith said. “I want to get married on the grounds of Uncle Norman’s home, where Granny’s house is in view because this is a special place. They are special people and this town is special.”

The wedding has been set for Saturday, April 25 — two days before Nicholson’s grandmother’s 105th birthday — on family land.

“We’re going to have a strawberry cake to commemorate the strawberry patch where we will be standing,” Smith said. “And there will be a big white tent with tables and chairs for the reception.”

In addition to a new husband and family, Smith said she feels she also has found a new place to call home.

“Seldom do you meet people who show you that consistent love and hospitality as I have experienced here,” she said. “Starting with the late Mr. Coleman, Ms. Cynthia, and their 12 children. Then the town – the grocery store, jewelry store, carwash, hotel, and especially the people at St. Peter United Methodist Church in Marion.

“I want this most special day of my life here in this town; that’s how I envision it. It’s not just about Ted and I; it’s about the roots and this town. This is an amazing town … And don’t be surprised if we move here, because we like it here.”

Meant to Be: Love comes full circle for couple

MARION, Miss. (AP) — There is a familiar saying, “If you love someone, set them free. If they come back, they’re yours; if they don’t, they ne…